Around 100 students from across the University spent Thursday evening marching up and down in front of the Kennedy School to protest Senator Durbin's visit.
By Alexandra A. Chaidez and Simone C. Chu 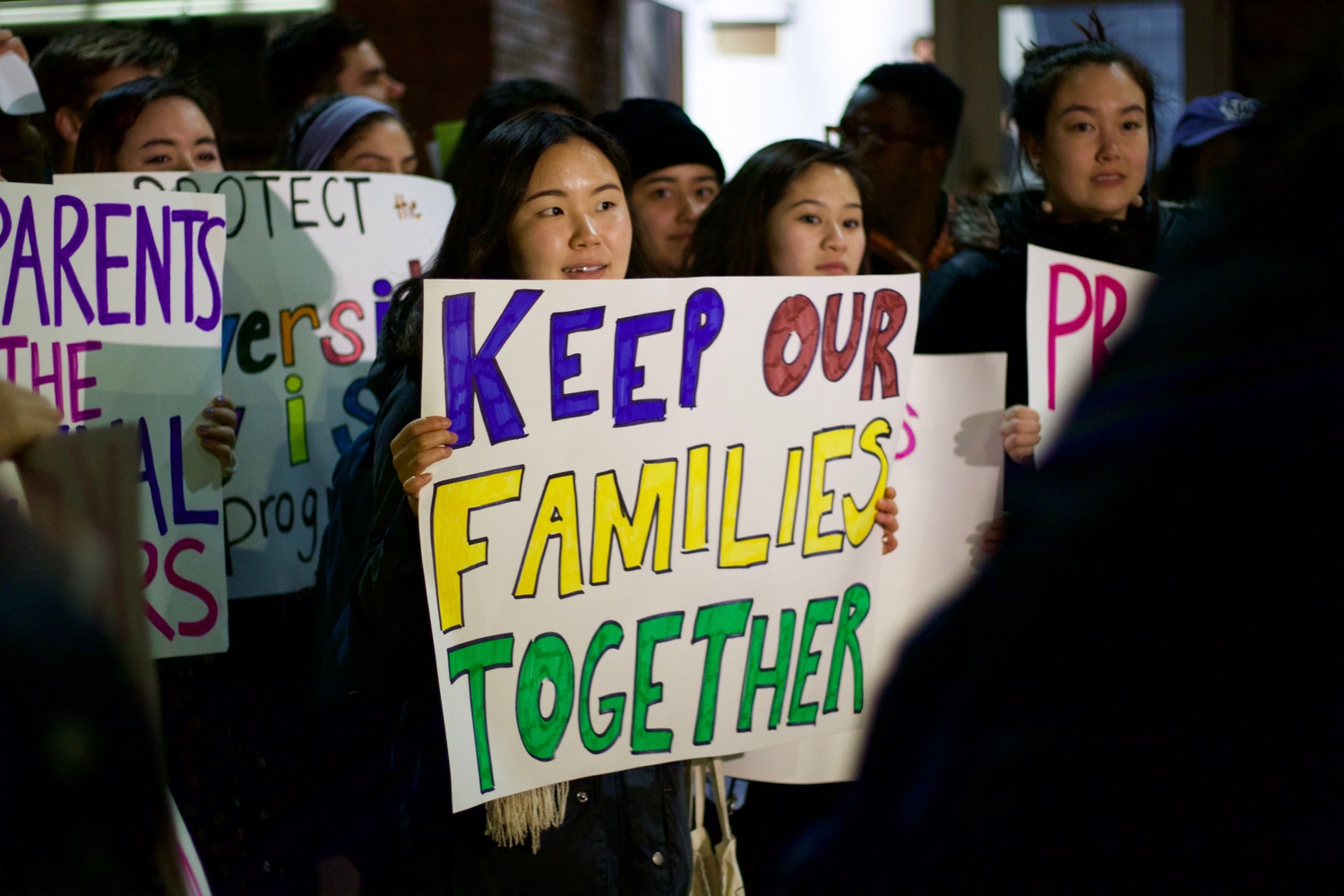 Protesters gather outside the Institute of Politics Thursday night in the name of immigration rights. By Amy Y. Li

Around 100 students from across the University spent Thursday evening marching up and down in front of the John F. Kennedy Jr. Forum to protest Senate Minority Whip Richard J. Durbin while he spoke on immigration to a select handful of Harvard affiliates inside.

Some demonstrators said they turned out to rally against what they called Senate Democrats’ too-eager willingness to reopen the government after a three-day shutdown last month. The shutdown began when Republicans refused to pass a bill protecting recipients of the Deferred Action for Childhood Arrivals program, an Obama-era initiative that gives legal protections to undocumented young people. Durbin was one of 33 Democrats who voted to end the government shutdown instead of negotiating a new DACA bill.

Durbin, one of the original co-sponsors of the Dream Act, recently proposed an immigration reform bill—co-sponsored by Senator Lindsey O. Graham—that would make the DACA program permanent. But the bill would also cancel the visa lottery and limit family-based migration; many protesters said they find both eliminations unacceptable. 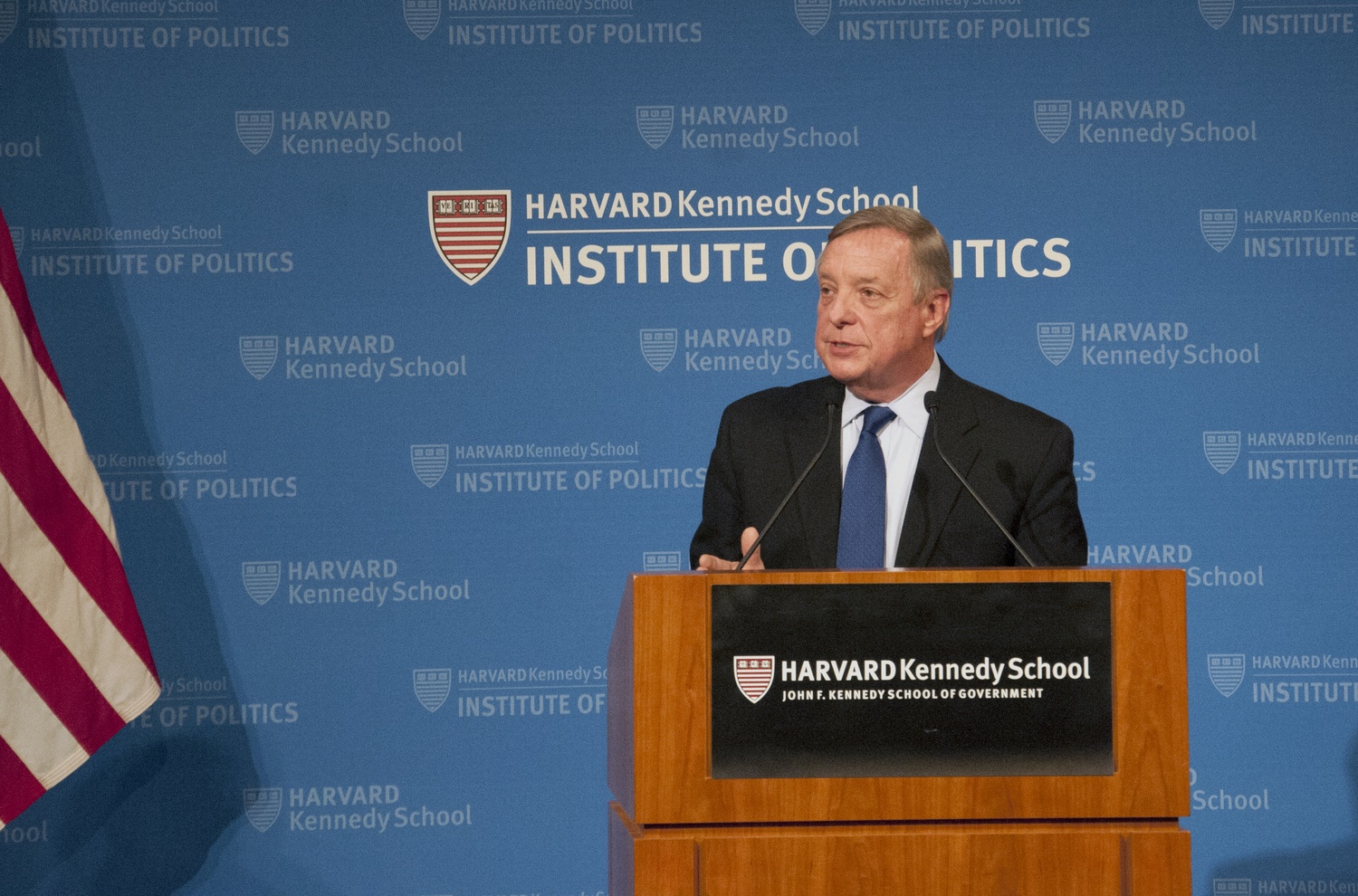 Bearing signs reading “We Are Not Your Bargaining Chip” and “The U.S. Government Has Never Protected Us,” demonstrators stationed themselves as close to the Kennedy School as possible and chanted slogans like, “Say it loud, say it clear—immigrants are welcome here!” The protesters—accompanied by a live band including at least one tuba-player—began shouting before Durbin took the stage around 6 p.m. and continued until after his speech ended.

A small number of demonstrators infiltrated the building, silently raising signs and keeping them aloft for part of Durbin’s speech.

Hyo-won “Esther” Jeon ’18, who spoke at the protest and said she helped organize the effort, said she thinks Democrats have disregarded several key opportunities to stand by the Dream Act. She said she wishes Democrats would use must-pass legislation—like the spending bill that caused last month’s shutdown—for leverage.

“When we needed them to hold the line down for us, they weren’t doing that,” Jeon said. “Every time they kick the can down the road, all they’re doing is making people more vulnerable to deportation.”

“When you hurt one of us, you hurt all of us,” Jeon, a DACA recipient, added.

The demonstration was co-sponsored by nearly 20 student organizations including Act on a Dream, the Harvard-Radcliffe Asian American Women’s Association, and the Harvard College Democrats.

During his speech and in an interview after the event, Durbin said he supported the protesters inside and outside the Kennedy School. He thanked them for their efforts and encouraged them to become “the driving force” for immigration reform in the U.S.

“I don’t want them to give up on this country. I’m not giving up on them, and I thank them for being out there in the cold tonight, marching with their signs,” Durbin said.

Inside the Kennedy School, Durbin spoke for roughly an hour about his personal experiences with DACA recipients and his efforts to pass a bipartisan immigration deal with the White House. University President Drew G. Faust introduced Durbin, calling him an advocate for Dreamers.

Durbin said Thursday he thinks immigration is “the civil rights issue of our time.”

A smaller group of about 14 students—a mix of undergraduates and graduate students from some of Harvard’s 12 schools—met with Durbin privately before his address.

Maribel Nava ’20, one of the attendees, declined to reveal exactly what Durbin discussed with the group, noting the meeting was supposed to be off-the-record. Nonetheless, she said she thought the conversation was at least somewhat productive. 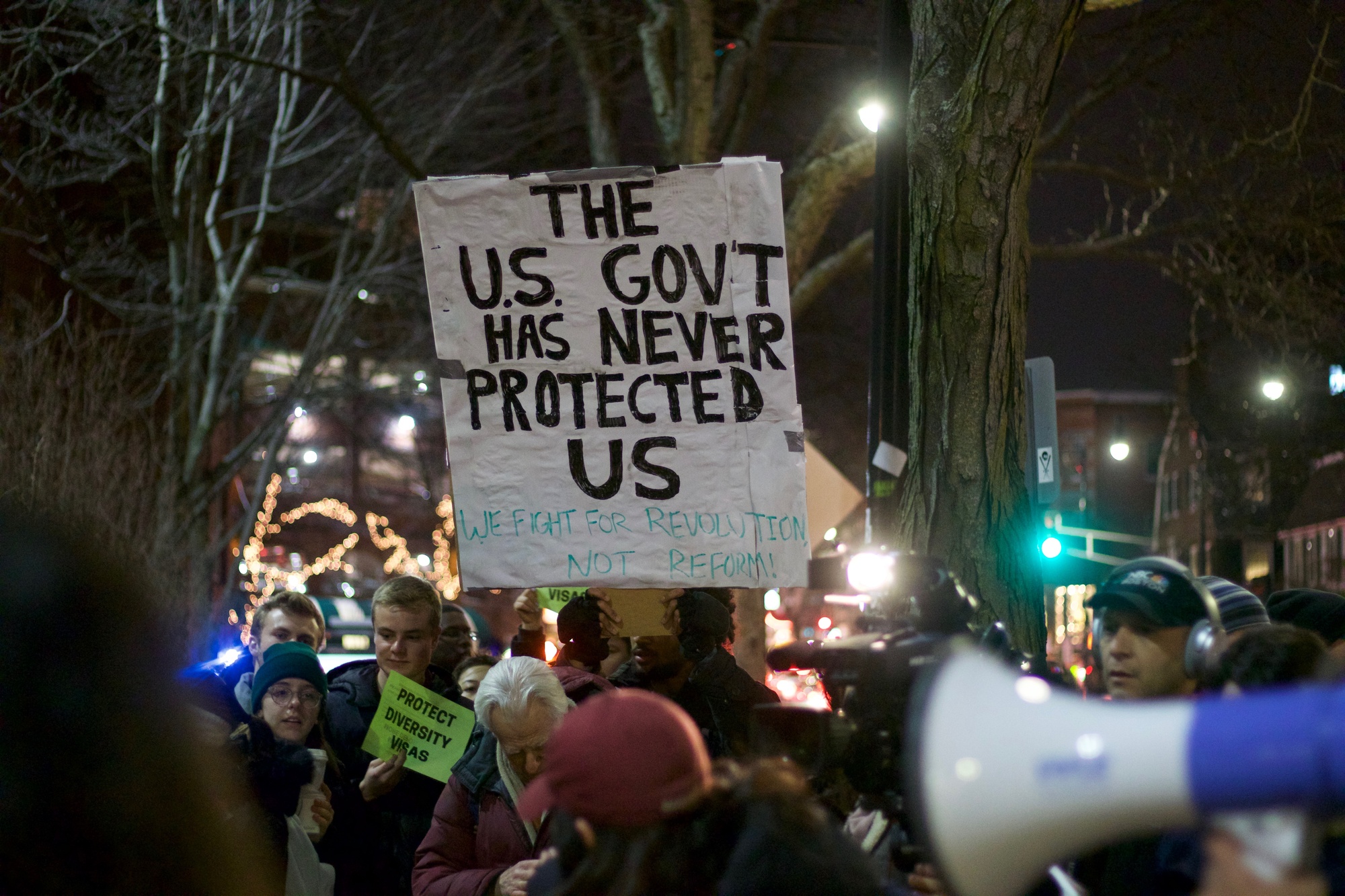 “We got across a couple of things that we wanted to share, which are the things that matter to us so much—that it’s more than just the dreamers, that it’s about parents, it’s about the 11 million,” she said.

Still, though, Nava said she felt overall “a little disappointed” with the meeting, noting that the Illinois senator arrived late.

“Our conversation was definitely shortened a little bit,” Nava said.

Durbin devoted much of his speech Thursday evening to addressing concerns raised by Jeon and other protesters that Senate Majority Leader Mitch McConnell will not fulfill his promise to work on a bipartisan immigration agreement. McConnell publicly pledged during the shutdown that he would allow a vote on a measure to protect Dreamers from deportation.

Durbin said he trusts McConnell to work with him on a deal as promised.

“I’m going to hold him to that promise and I believe he’ll keep that promise,” Durbin said. “I hope he doesn’t break my heart.”

Protesters criticized this strategy and said they think Democrats should fight for a “clean Dream Act” without concessions to Republicans.

“I know that if the Dream Act passes and it’s not a clean Dream Act, I would feel nothing but guilt that this is what it took for me to become a U.S. citizen,” Laura S. Veira ’20 said during the question-and-answer portion of the event.

Durbin said a clean Dream Act is impossible at the moment because he still needs five or six more Republican senators to agree to support the bill.

As negotiations stretch on in Washington, DACA recipients and advocates at Harvard say they feel uncertainty has become the only certainty.

“I don’t remember a time where I constantly didn’t wish for papers,” Veira said.