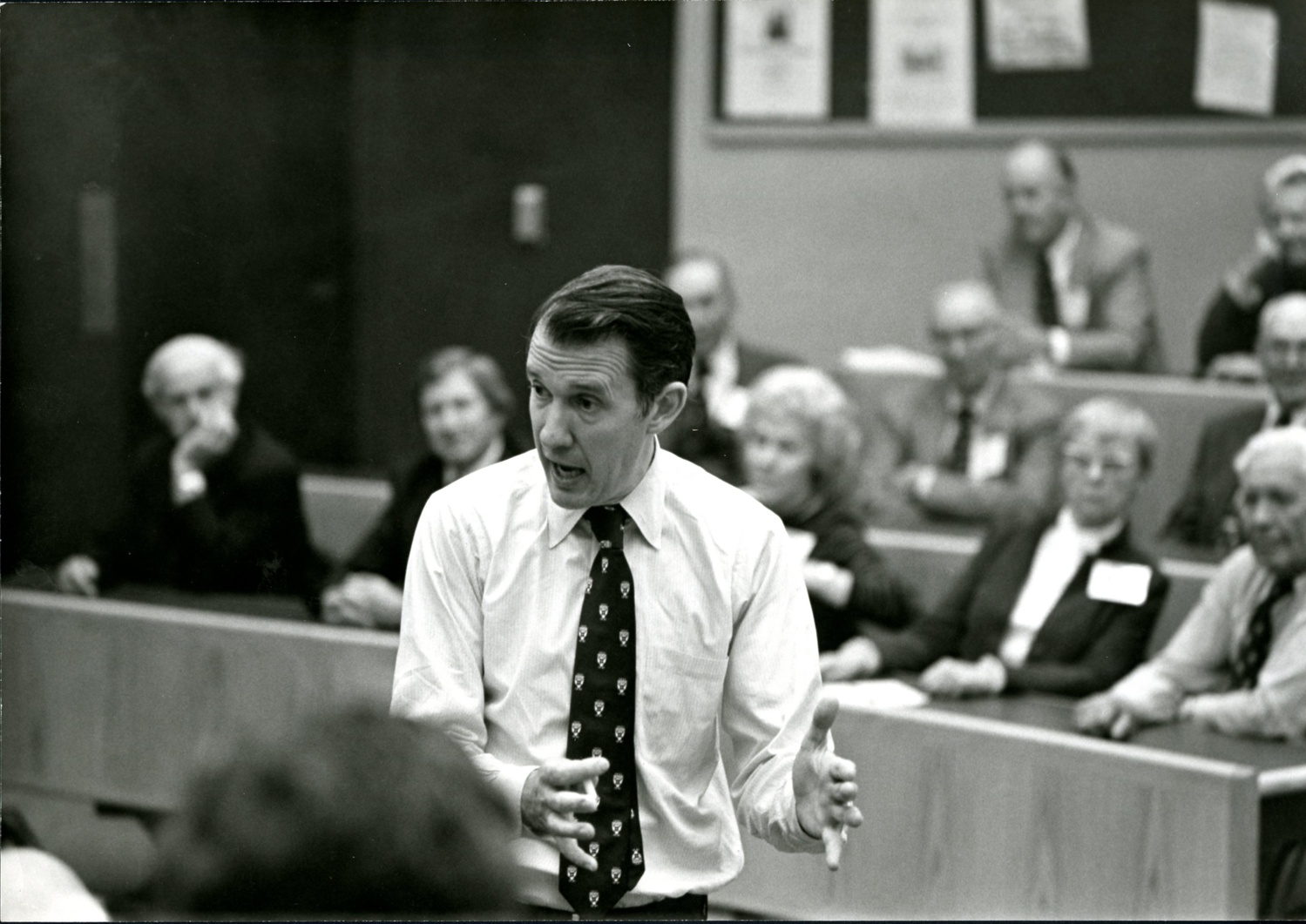 When Laura U. Moon ’88 crossed the Charles River as an undergraduate to sit in on one of her father’s classes at the Business School, she quickly realized she was far from one of her anonymous lectures in Sanders Theatre. She watched with surprise as he paced the classroom, occasionally hopped up on the front desk to swing his legs, and systematically ripped his students’ arguments to shreds.

“He did it in such a playful way,” Moon said. “He used the process of teaching to help his students live and breathe the learning.”

A longtime professor of business administration, Hugo E. R. Uyterhoeven died on Jan. 29 at 86 due to complications from a bike ride injury. He was remembered by family and colleagues for his attention to detail, people-oriented attitude, and quick-wittedness that led to a prolific teaching and administrative career spanning more than 50 years.

Salter recalled a class where Uyterhoeven asked the students to calculate a company’s profit. After they agreed the company was cash-rich, he helped them peel back the layers until the class was divided on whether the company was next to broke, overflowing with money, or somewhere in between.

“Well, wait a minute now,” Salter remembered Uyterhoeven saying. “You’re the best and brightest. We’ve just spent an hour, and we can’t figure out whether this company has enough cash to do what it wants to do? How’d you get into the Harvard Business School anyway?”

Philippe C. Haspeslagh, a former student and professor at a Belgian business school, said Uyterhoeven was “the ultimate case teacher.”

“His questions, sharp mind and wit had us all in awe, yet we all loved being pushed by him, sensing his genuine warm interest in developing us as persons.” Haspeslagh wrote in an email.

Uyterhoeven’s guiding principle was to use simple frameworks to analyze complex questions from many different angles. Salter recalled a time when Uyterhoeven took a single case study problem and stretched it over not just one 80-minute class period, but three.

Academically, Uyterhoeven was interested in middle management, something understudied at the time, Moon said. Other topics of interest included domestic and international economy and business and government interactions.

The center of his academic life was pedagogy, and many of his writings were teaching materials for course development rather than academic articles for publication.

Yet Uyterhoeven’s path to discover his passion for teaching was far from straightforward. Born on August 6, 1931 in Eindhoven, Netherlands, he grew up facing food shortages, bombings, and separation from his father during World War II under Nazi occupation. According to family members, young Uyterhoeven had to navigate crossing the Nazi-protected border to Belgium by himself to visit his father.

When he was 17 years old, Uyterhoeven moved to Switzerland, where he finished high school and earned a law degree. He then received a scholarship to come to the U.S. and enrolled at the Business School, becoming a Baker Scholar with High Distinction in 1957.

After graduating, Uyterhoeven decided to work as a research associate for a visiting Harvard professor at a prominent Swiss business school. Several times during that year, the Business School professor he was working with had scheduling conflicts with his class and asked Uyterhoeven to teach in his stead. That was when Uyterhoeven fell in love with the theatricality of teaching.

In addition to his teaching, Uyterhoeven brought the same energy and conscientiousness to a variety of administrative roles as well. Over the course of his career, he worked in several positions at the Business School and set the model for reunions, developed corporate and public relations, and oversaw extensive campus renovations.

Crispi described a meeting where Uyterhoeven brought three separate flip charts and ran between each of them with colored pens to capture the ideas of his colleagues. When renovating faculty offices, he built mock-ups of three potential layouts and had professors test them for a year.

“He had this ability to go from a vision to how to implement at a micro level,” Crispi said.

Uyterhoeven even extended his administrative talents beyond the Business School—to Weston, Mass., where he lived for more than 40 years, and to John’s Island in Vero Beach, Fla., where he retired with his wife, Julie Zhu. Moon recalled how as president of the Weston Forest and Trail Association, her father ultimately doubled the acreage of conservation land and trails. He even used a connection with a former student to acquire free trail markers made of scrap aluminum.

Upon retirement, he served as president of his condominium association for seven years, restructuring their finances, improving their hurricane insurance, and enacting physical renovations to the building.

He also co-chaired a business and economic history lecture series at the John’s Island Club called the Gold Seminar.

“Hugo wanted more in retirement than golf and tennis,” George D. Higgs, the other co-chair of the Gold Seminar, wrote in an email. “You knew you were in the presence of greatness.”

Uyterhoeven loved jazz and had a comprehensive CD collection ranging from household names like Billie Holiday and Ella Fitzgerald to more niche singers like Blossom Dearie and Eartha Kitt. Moon said his biggest advice was to never take yourself too seriously–and to never bounce a check.

“For me and for so many of us he has always been our rock,” Moon said. “Somehow I feel a strength and a readiness to know that all of the things I’ve learned from him are a part of me now.”

Uyterhoeven is survived by his wife, Julie Zhu, and five daughters.

— Staff writer Sofia W. Tong can be reached at sofia.tong@thecrimson.com.