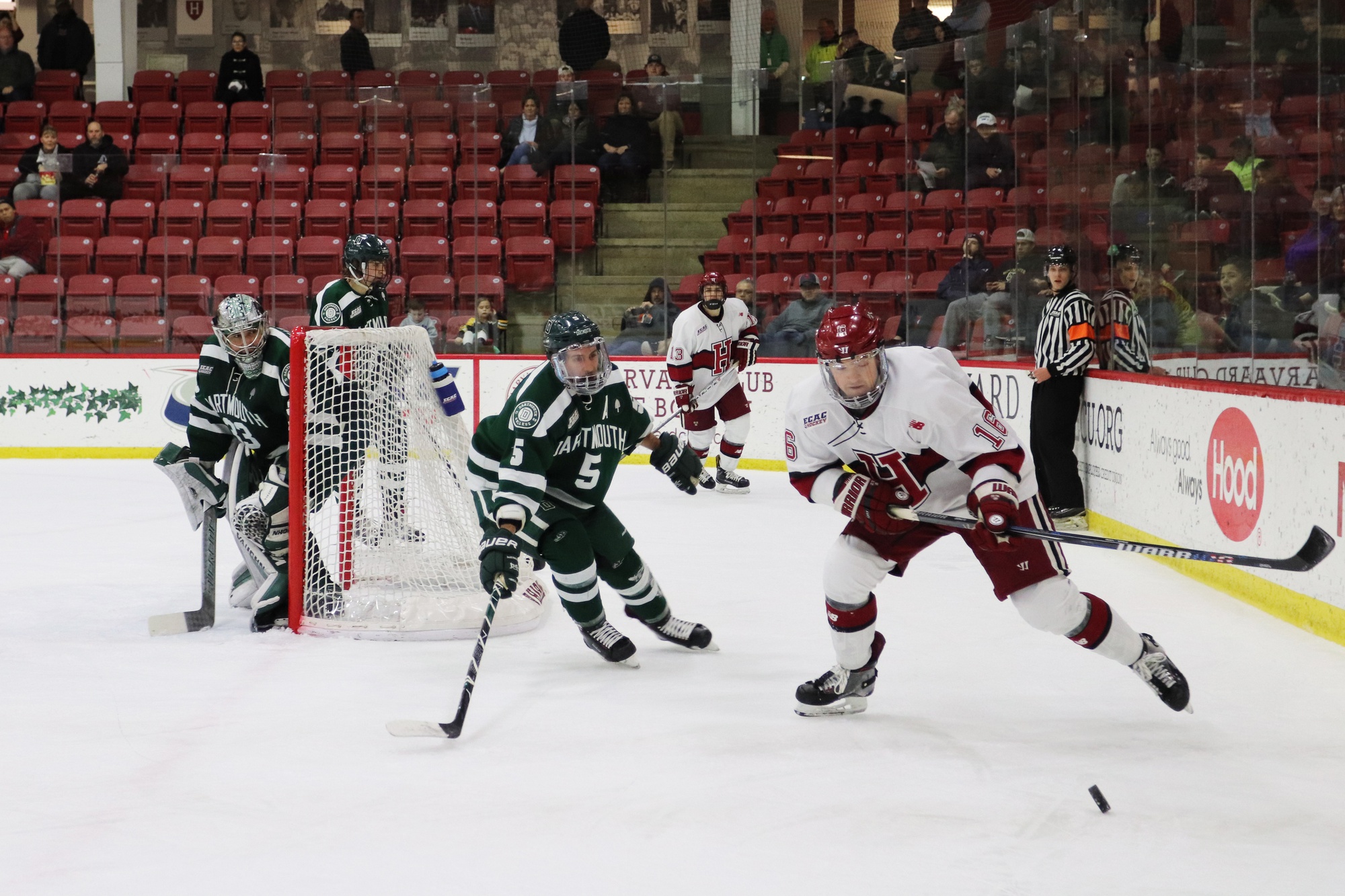 Junior forward Ryan Donato netted a hat trick on Sunday that propelled the Crimson to the semifinals in Lake Placid. In the most important games, coach Donato reminded everyone, your best players need to carry the team. By Lu Shao
By Spencer R. Morris, Crimson Staff Writer

Harvard junior forward Ryan Donato has scored 26 goals this season, but none were more crucial to the Harvard men’s hockey team than the trio of tallies he logged on Sunday evening.

“They were very well-prepared,” Harvard coach Ted Donato ’91 said. “I thought they played super competitive. When you play in the playoffs, you have to elevate your game. And they made us elevate our game.”

The victory marks the Crimson’s fourth straight trip to Herb Brooks Arena. In 2015 and 2017, the squad took home the conference crown, and in between those triumphs, it finished second to eventual national runner-up, Quinnipiac.

“I mentioned it to our seniors after the game to congratulate them for making Lake Placid four years [in a row],” coach Donato said. “It’s tough to get back to Lake Placid, and I think we certainly got off to a tough start [this season], and we’ve had some ups and downs, but…to get to Lake Placid is pretty special.”

After falling to the Big Green (16-17-2, 11-10-1) in game one of the series, the home team rallied to nab two consecutive tilts en route to ending the Ivy League rival’s playoff run.

Prior to the season-saving performances, Harvard found itself in a strange position: its back was up against the wall to a team it normally handles with relative ease. Coach Donato’s squad outscored Dartmouth, 9-1, across two contests in the regular season and had prevailed seven of the last nine meetings between the teams leading up to this year’s playoff matchup.

Ultimately, the Crimson’s superior star-power willed the team to the next round. In addition to Donato’s seven points (4–3—7) in the pair of wins this weekend, sophomore blue-liner Adam Fox, another offensive workhorse for Harvard, registered six (3–3—6).

“On Saturday and Sunday, [Donato] elevated his game, and that helped elevate our team,” coach Donato lauded. “Fox, I would say the same thing. Those are our best players, and important games need your best players to be the best players. I thought both those guys absolutely did that.”

Not only does the series victory preserve the 2017-2018 campaign; it also keeps Donato in the crimson and white, rather than the yellow and black. The Boston Bruins, owners of the junior’s draft rights, are simply counting down the days until Donato joins the NHL club for a potentially fruitful playoff run. 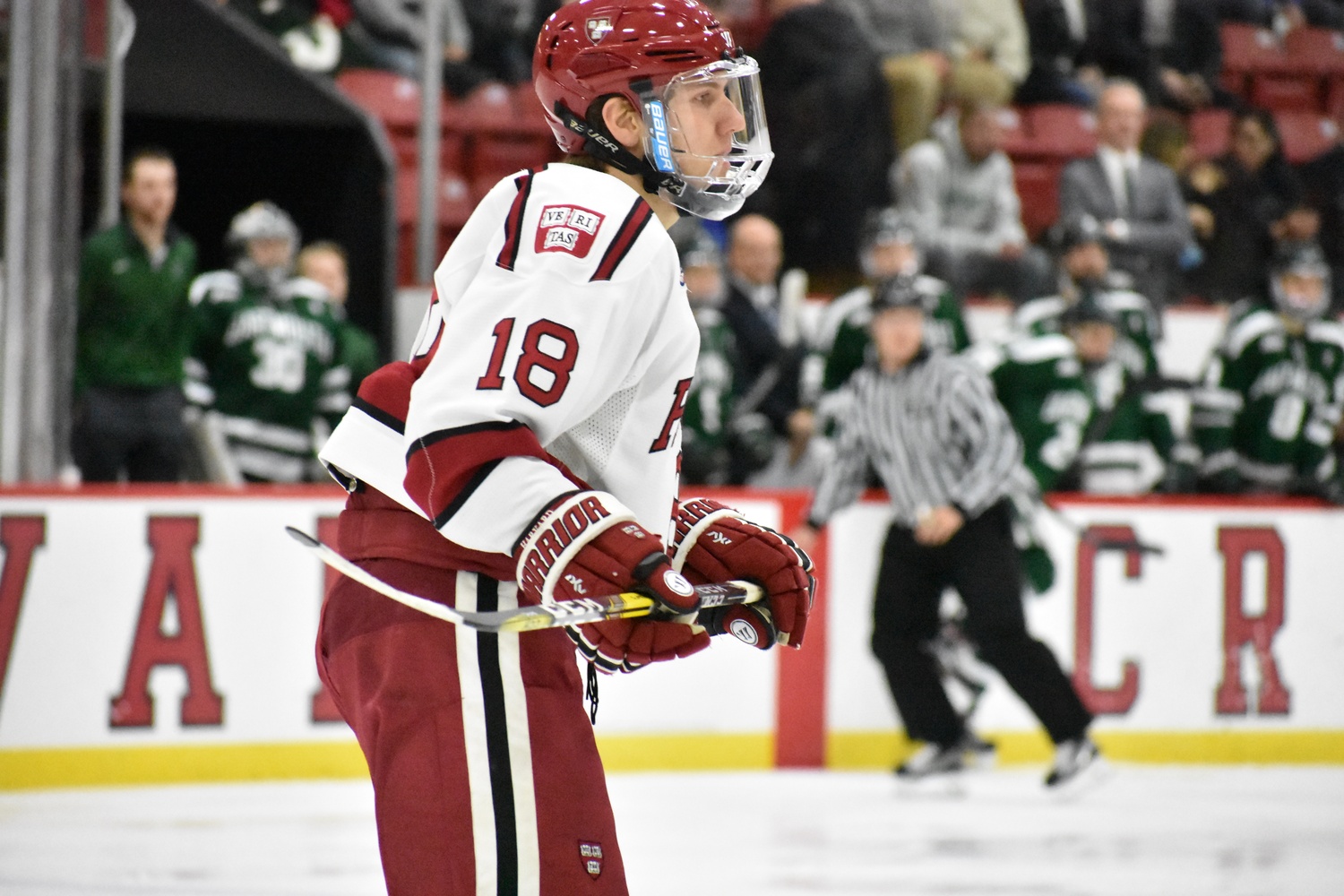 Sophomore blue-liner Adam Fox played a large role in his team's series comeback over Dartmouth. The puck-moving defenseman will have to be in top form in Lake Placid if Harvard wishes to return to the NCAA Tournament. By Amanda M. DiMartini

Though not a guarantee, Donato’s departure from Harvard and its hockey program seems imminent after impressive performances for both his college and his country in February’s Pyeongchang Olympics.

The Scituate, Mass., native’s skill was certainly on display Sunday night. To complete his hat trick, Donato split two Big Green defensemen by flicking the puck up over their sticks upon entering the offensive zone. He corralled the puck, which was swatted even higher into the air by Dartmouth alternate captain Tim Shoup, lost a glove in the process, and punched home his own rebound.

“I just saw a little space in between the two defenders,” Donato recalled. “All of a sudden I realized my glove was off. I didn’t even feel it go off, [I] just gripped the stick a little cold, and I go, ‘Oh.’ And I brought it to my backhand, I couldn’t get it up, and then I just tried to bring it back to my forehand and...thankfully it went in.”

With his third hat-trick performance of the campaign, Donato pocketed at least a point in all five clashes with the Big Green this year. The centerman also regained possession of the NCAA lead in goals per game.

“[Ryan] takes hockey very seriously. He prepares more than anybody,” tri-captain Merrick Madsen said. “Since I had shots from Jimmy [Vesey ’16, Hobey Baker winner], he’s the closest thing to being able to just pinpoint pucks and put them in the craziest of places…. I guess I’m just thankful that I’m on the side that I am.”

The game wasn’t all glitz and glamour, though. In fact, the first period contained a truly strange play. Dartmouth sophomore Shane Sellar put a seemingly harmless backhand shot on net, but the puck bounced up on Madsen. The flailing goaltender did make the save, albeit an unconventional one. Madsen was forced to pin the puck against the post using his back pads, only to let it fall to the ice after the referees whistled play to a halt.

“[Sellar] missed the net, and it kind of hit the side of the net, and it popped up, and I felt it on my shoulder,” Madsen explained. “I kind of just twisted my back and…put everything I could up against the post, and apparently, the puck was stuck in between me and the post. I didn’t know where it was, but I was scared if I even moved at all that it would go in.”

While Donato’s offensive outburst eventually stole the game for the Crimson, it was the visitors who jumped out to the early advantage. Freshman forward Collin Rutherford drew first blood just five minutes after puck drop.

Alternate captain Corey Kalk threw a puck toward the net mouth, where a crashing Rutherford whacked at it multiple times before batting it past Madsen.

Madsen, who started all three games for Harvard this series, appears to be coach Donato’s goalie of choice after a season of uncertainty between the pipes. The senior helped the squad all the way to the Frozen Four last year and did his part this weekend (2-1-0, 2.05 GAA, .906 SV%) in ensuring his tenure as a Crimson backstop persisted.

If Harvard wants to continue its ECAC playoff run—with a title being essentially its only hope of reaching the NCAA Tournament—Madsen’s play and a general sense of stability in the cage will be paramount. Looking ahead to the semifinals, the Crimson’s matchup sends the net-minder mixed signals. 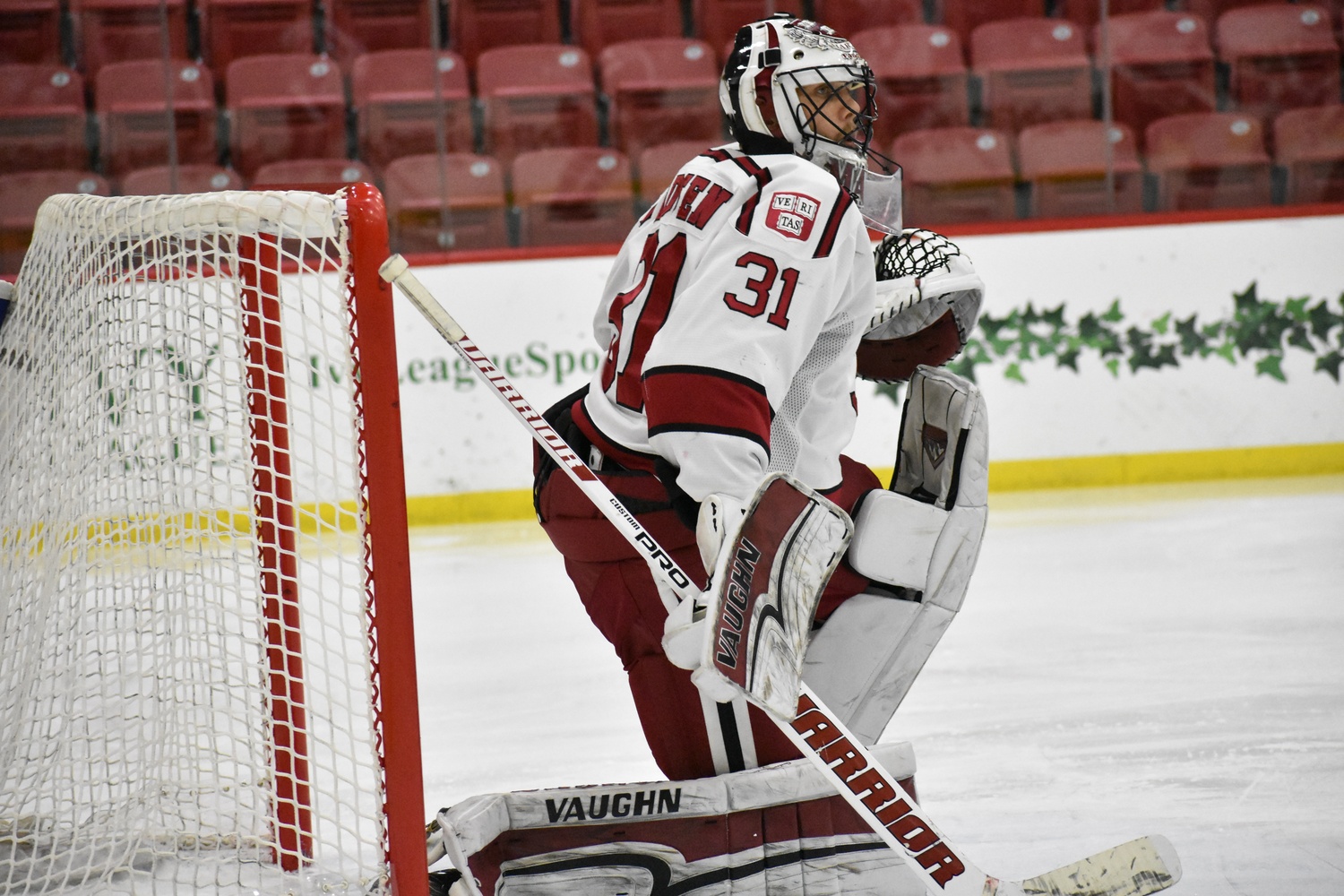 Tri-captain Merrick Madsen helped his team to victory this weekend and will be the starter moving forward. After a season of goaltender controversy, it looks like the Crimson are finally stabilizing the situation by sticking with Madsen. By Amanda M. DiMartini

On one hand, the teams’ most recent showdown saw Harvard upset the then-No. 2 Golden Knights thanks to big-time play from Madsen (2.00 GAA, .929 SV%). On the other, a late-January meeting between the two squads represented one of Madsen’s major setbacks this season (6.12 GAA, .800 SV%). That game, the tri-captain earned the hook from coach Donato after ceding a game-changing goal from beyond the blue line.

As long as the Acton, Calif., product gives his team a chance to win, however, expect him to continue to field pucks for Harvard. And Madsen did just that this weekend despite what a .906 weekend save percentage—pedestrian on paper—might indicate.

Entering the series, the Big Green was riding the offensive renaissance of sophomores Will Graber and Sellar and freshman Quin Foreman. Thanks in part to timely saves from Madsen, the three key players combined for just a single point all weekend after totaling six against St. Lawrence in the first round.

Madsen also played a role in stymying a late-game push from Dartmouth, who mustered just one more score before the final horn sounded.

“They’re looking at the end of their season there,” said Madsen. “They’re going to just throw everything at us that they can. We had a lot of guys step up and block a lot of shots, which was humongous.”

Despite a storied Ivy rivalry between the teams, this weekend marks the first-ever Crimson victory over the Big Green in a best-of-three setting. Harvard, after all, has played just two other game threes against its Hanover, N.H., counterpart (2011 and 2013) and now owns an 8-5 all-time record against Dartmouth in ECAC playoff play.

The series win concludes the Crimson’s campaign at the Bright-Landry Hockey Center. The program’s seven seniors will never again lace up their skates in Harvard’s home building.