In his NHL debut, the former Crimson iceman shone in front of family, friends, and hometown fans, registering a goal and two assists 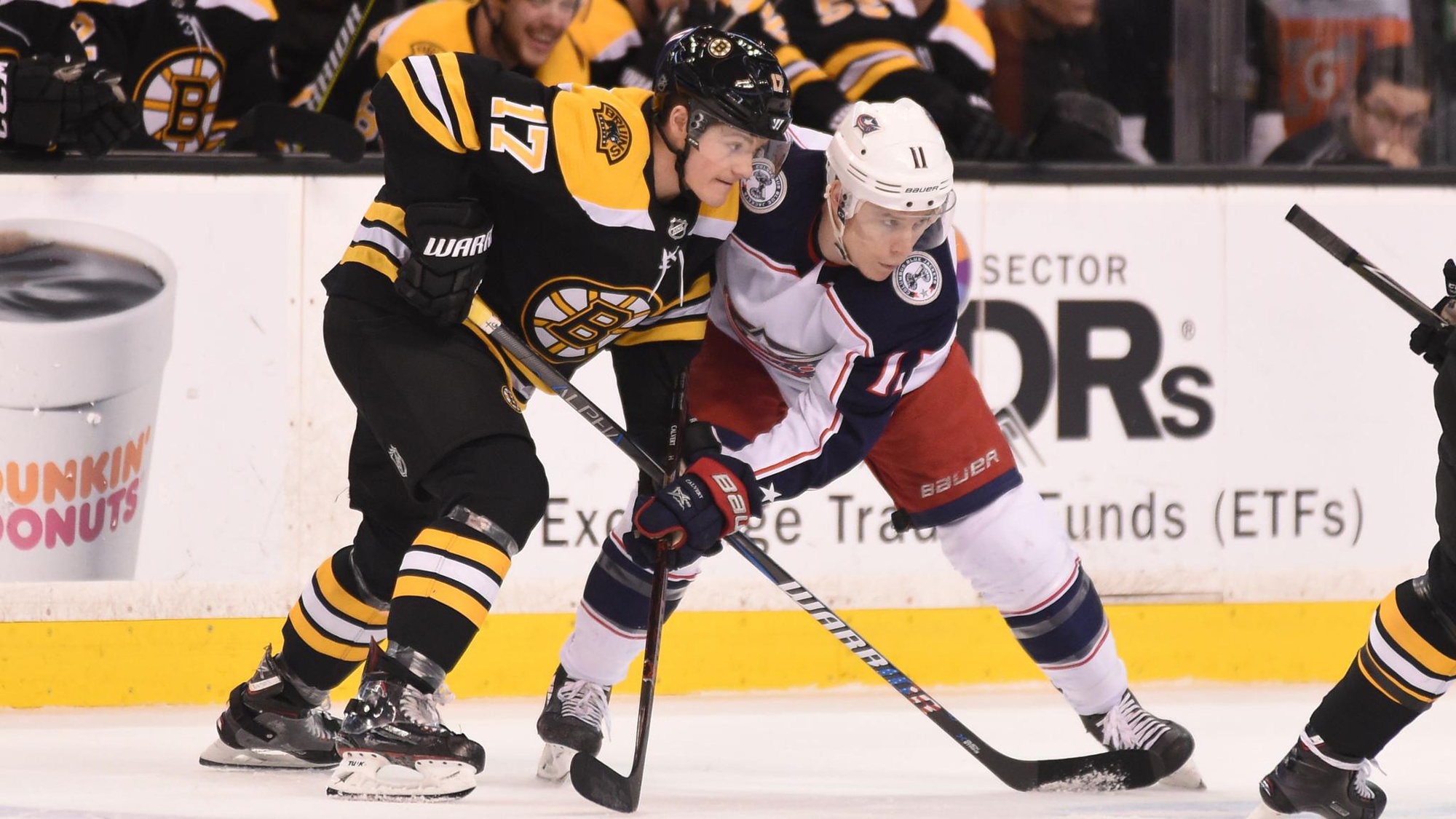 Former Harvard star Ryan Donato made his NHL debut for the Boston Bruins on Monday night. The academic junior notched his first professional goal and chipped in two assists in the team's 5-4 overtime loss to the Columbus Blue Jackets.
By Spencer R. Morris, Crimson Staff Writer

BOSTON — Not many NCAA hockey players can say that they have skated for three teams in a single season. Former Harvard standout Ryan Donato is an exception.

Sunday night, the junior announced his early departure from the College to join the National Hockey League’s Boston Bruins, just two days after the Harvard men's hockey season concluded and a month after returning from his stint for team USA in the 2018 Winter Olympics.

Donato, who inked a two-year entry-level deal with his hometown team, promptly hit the ice with his new teammates for a morning skate on Monday before his NHL debut that evening. The Scituate, Mass., native had one of the busiest days of his life, but his first day as a Bruin will certainly be one to remember.

Before logging even 10 minutes of ice time in the black and gold, Donato tallied his first NHL goal on a one-timer from his lethal office: the left circle. An ecstatic Donato and a roaring TD Garden crowd made for the highlight of an already momentous day in the life and career of the recent Crimson iceman.

“It’s a whirlwind experience,” Donato said, before pivoting to discuss his goal. “I’m pretty sure I blacked out during it. It was a lot of fun, and I still can’t believe it happened myself.”

The jam-packed day began with a casual but important skate at Boston’s practice facility, the Warrior Ice Arena. While only half an hour in duration, the morning run-through allowed Donato to ease into his NHL gig and get to know his new team—a squad that includes both future hall-of-famers and up-and-coming stars.

Head coach Bruce Cassidy did not waste much time getting his young forward involved. Donato led the pre-practice stretch, surrounded on all sides by his new teammates.

The second-round draft pick’s acclimation was made easier by the fact he recognized plenty of the faces in the locker room. By virtue of attending Boston’s development camp for each of the last three summers, the left-hander had already met six skaters in Monday night’s lineup. Among these was ex-Denver forward Danton Heinen, who played the wing opposite Donato in his debut. 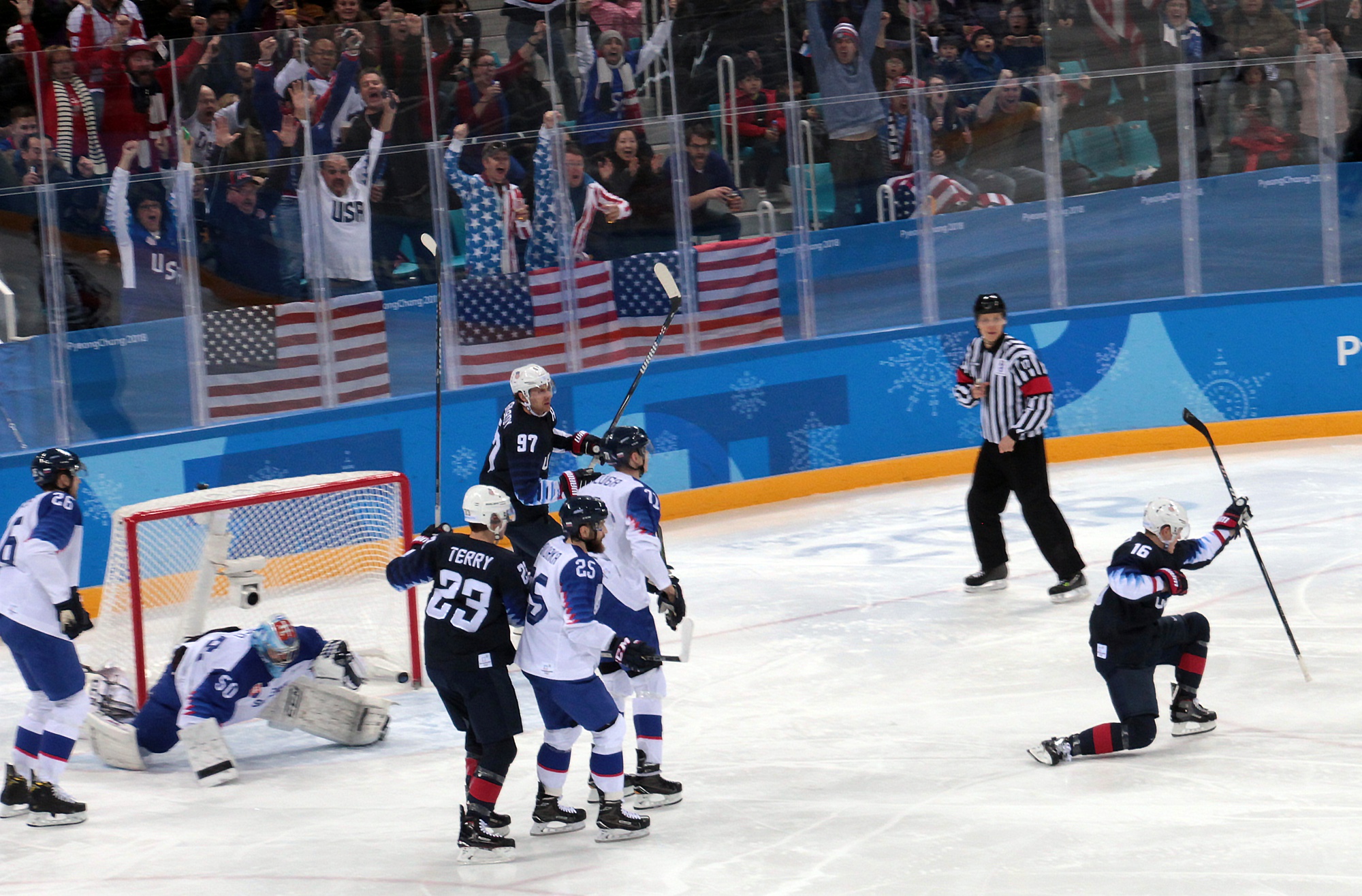 Donato, pictured here celebrating a goal during his Olympic stint in February, has now sported three uniforms this season and excelled for all three teams. By Courtesy of USA Hockey/United States Olympic Committee

Another familiar face for this year’s ECAC Player of the Year was the oldest competitor on the ice on Monday, 39-year-old forward Brian Gionta. The 5’7” NHL veteran captained the USA Olympic team for which Donato played in February and promises to be a valuable mentor for the recent signing.

“[Gionta] played with him over at the Olympics,” Coach Cassidy said after Monday’s morning skate. “That’s a good guy to have right away to bounce ideas off on the bench. [Ryan] should have plenty of feedback.”

Donato could not escape the media after the skate. Journalists, television stations, and radio commentators battled to hear the 21-year-old’s thoughts on his first day in the NHL. While the attention may have been distracting, Donato had his eyes set on the main event.

At 7:00 p.m. the puck dropped for Donato’s inaugural NHL game, with a streaking Columbus Blue Jackets team in town and looking for two points. The tilt marked the culmination of a life’s dedication to hockey.

“During warmups actually, I was just kind of taken away,” Donato said. “It kind of felt like a dream, and I really didn’t even get that warmed up because I was too focused on everything else and just kind of the whole situation… It was an unbelievable experience.”

The late scratch of Bruins forward Rick Nash meant coach Cassidy needed a fill-in for second-line left wing duties. Donato received a promotion without even taking a NHL shift, getting bumped up from the fourth line to fill Nash’s void. Plus, Donato received ice time with the second power play unit, so the team was counting on his contribution from his very first shift.

“It’s kind of a unique situation where I come in when the team is needing players,” Donato said of his unforeseen top-six role in his debut. “I’m just happy that they thought highly enough of me to put me in those situations to have success. When you’re playing with great players, it’s not too hard to have success.”

“For me, it was a blessing,” said Donato, when asked about debuting at home. “Some people would think it’s tough just because there’s a lot of commotion with your friends...but those are the people—friends and family—that support you, and I couldn’t be happier to have these guys here.”

As if scoring in his first game was not enough, Donato followed up his goal with a pair of assists and became one of the Bruins’ major creators of offense on Monday night. For the Dexter School product, though, it was business as usual.

“I think early, he was trying to make some plays but then realized, ‘Listen, just play to your strength,’” Coach Cassidy said of Donato’s debut performance. “I’m sure there’s a few teaching moments once you go back over the game tape…but I liked him a lot. I’m sure [center David Krejci] did as well, they seemed to have some good chemistry.”

Despite Donato’s best effort, he will have to wait until Wednesday for another crack at his first NHL win. The Blue Jackets stole the game in overtime, 5-4.

“It was fun. Obviously it ended tough,” Donato said. “It all went well personally, but obviously it’s still bitter because of the loss.”

Win or lose, Donato’s individual performance left Bruins fans giddy with excitement. Sure, he marked up the score sheet. But perhaps more importantly for a break-in player, Donato acted as a determining force in the game without hesitation. The same Ryan Donato Harvard saw for three seasons and Team USA saw for three weeks came out to skate on Monday night.

“This is one game, but some of the guys that come in, you saw this with [defenseman Charlie] McAvoy,” Coach Cassidy said, noting that Donato fearlessly put forth his brand of hockey. “He just played his game. It would be great if he has similar success…. [I’m] very impressed by that, to be able to come in here, especially [in] your home town, maybe [with] some jitters there.”

In a span barely longer than 24 hours, the former Crimson centerpiece signed a professional contract, began integrating himself with his new team, handled an onslaught of media attention, and accomplished a milestone he will never forget.

Not bad for a day’s work. But, even with his newfound limelight and shiny NHL contract, Donato left TD Garden late Monday night planning to return to his same old dorm room in Harvard’s Winthrop House.

Not only is the forward living at school for the time being, but he also plans to complete the academic semester. The sociology concentrator has every intention of earning his degree, ideally at the same time the rest of his class does, even if it means lugging his books on the team’s road trips.

Over the next few months, Ryan Donato will navigate the tricky balance between his professional hockey obligations and his schooling. For now, you can catch him in class Tuesday morning at 9:00 a.m.—no, that is not a misprint. The academic junior will attend lecture and take notes as if Monday's events simply never happened.

In reality, though, Donato could not have experienced a more thrilling—and exhausting—first day as a Boston Bruin.