The high schoolers’ stop at Harvard follows weeks of television appearances, interviews with national publications, and high-profile advocacy on Twitter.
By Alexandra A. Chaidez and Simone C. Chu 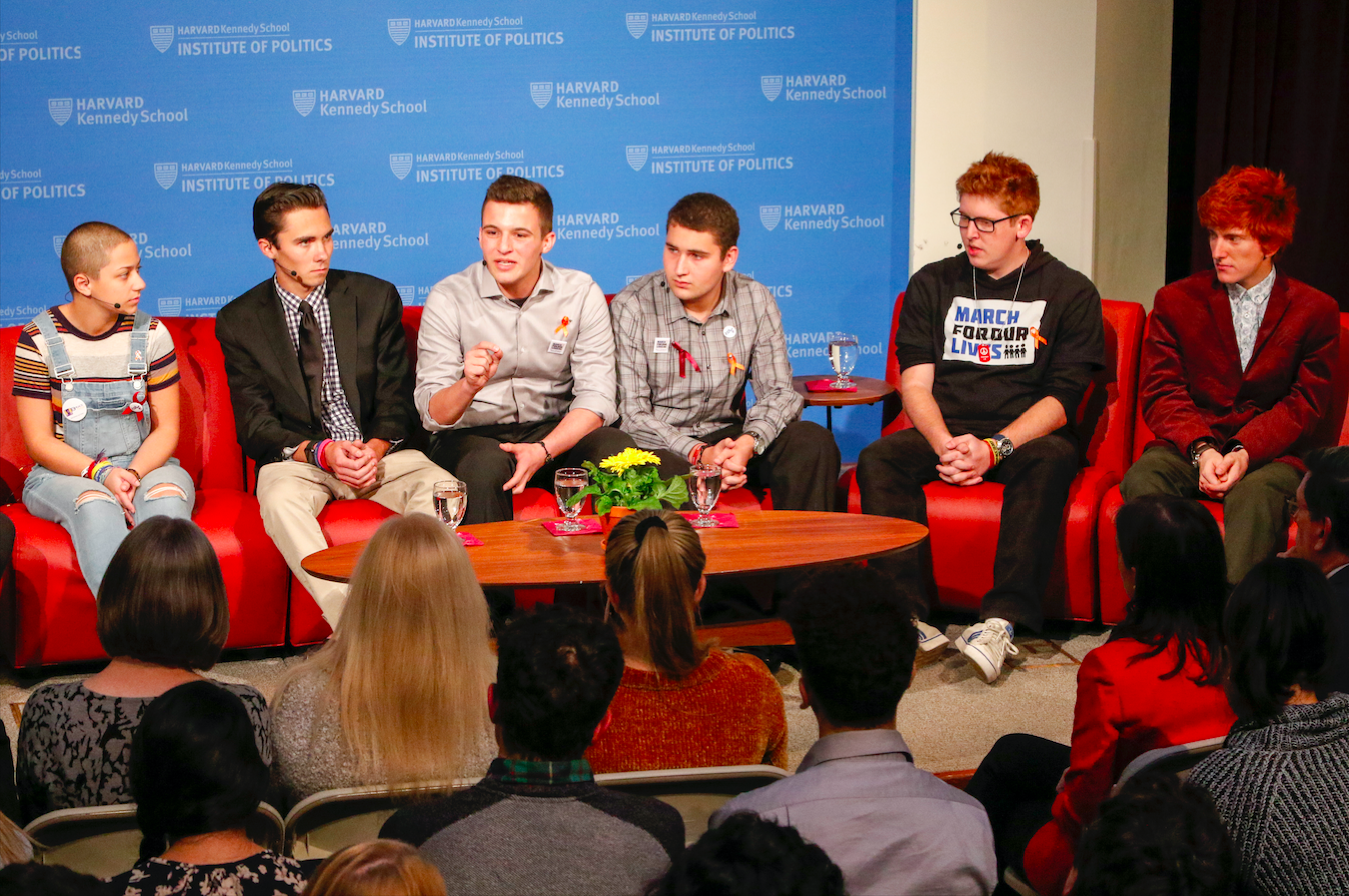 The high school-aged survivors of the recent Parkland, Fla. shooting are using their experiences to spur national awareness and action. By Timothy R. O'Meara

The panel, titled “#NEVERAGAIN: How Parkland Students are Changing the Conversation on Guns,” featured five survivors of the Feb. 14 shooting at Marjory Stoneman Douglas High School in Parkland, Fla. During the shooting, Parkland students hid in closets, texted their parents farewell, and listened as their friends met violent deaths at the hands of the shooter, who has since been indicted on 34 counts of premeditated murder and attempted murder.

Now, the survivors of the shooting are using their experiences to spur national awareness and action. The high schoolers’ stop at Harvard follows weeks of television appearances, interviews with national publications, and advocacy on Twitter—in many ways the signature platform of the students’ call to action.

At Harvard, the students did not shy away from describing the horrific events of Feb. 14 in unsparing detail. The speakers included current and former Parkland students Matthew Deitsch, Ryan Deitsch, David Hogg, Cameron Kasky, Alex Wind, and Emma González, the 18-year-old who became the face of the #NeverAgain movement after giving a viral speech days after the shooting. 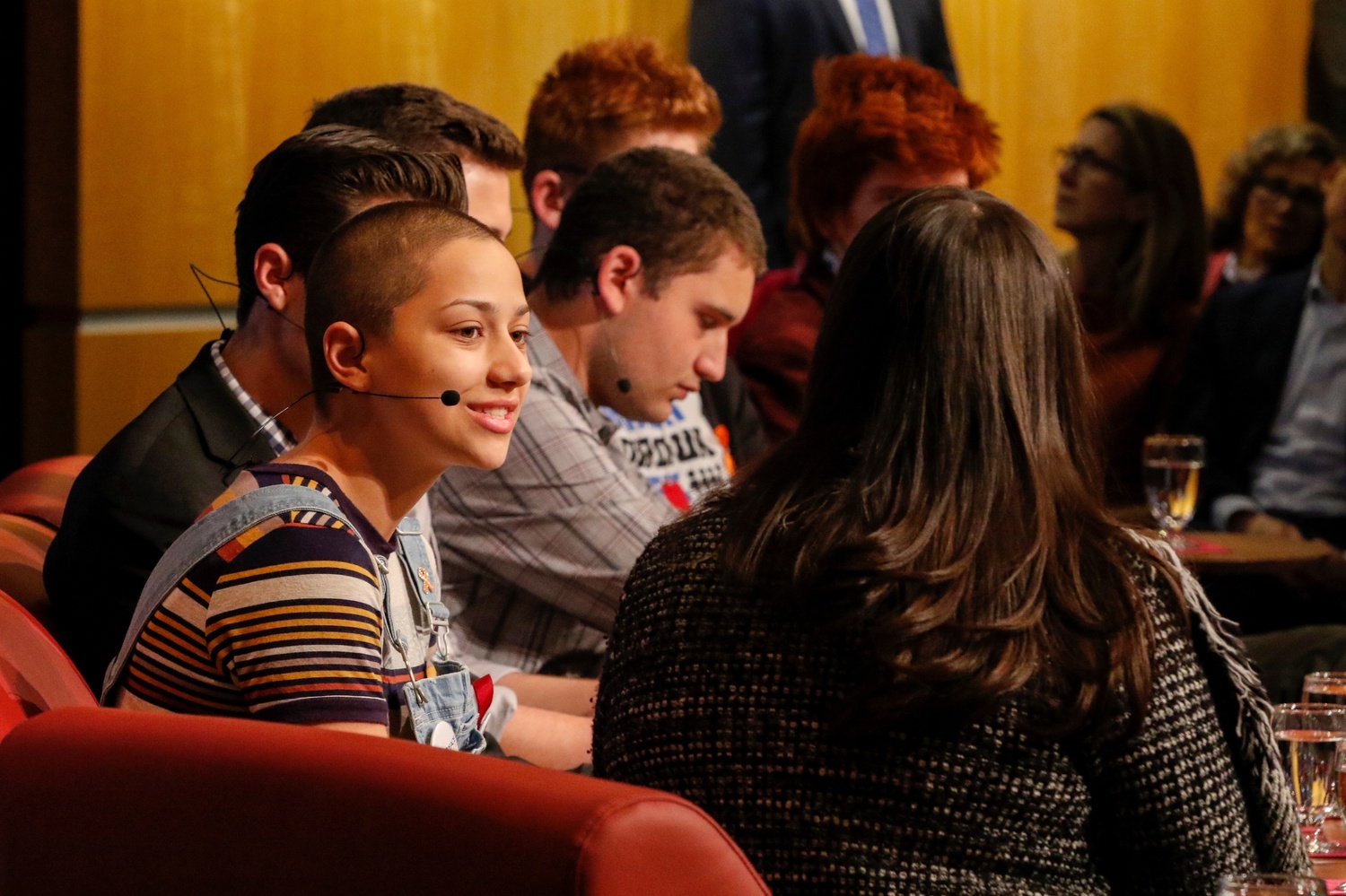 Marjory Stoneman Douglas High School senior Emma González and five of her classmates spoke at the JFK Jr. Forum Tuesday about their organization of the #NeverAgain movement, a push to end gun violence across the United States. By Timothy R. O'Meara

González opened the panel by calling for a moment of silence in recognition of a shooting at a Maryland high school that took place Tuesday morning. As of late Tuesday evening, the only casualty of that shooting was the shooter. Two students were injured.

“It’s important that we have these moments of silence to remember these individuals, but I think it’s just as important to speak up,” Hogg said Tuesday. “We have been silent for too long as a nation. We’ve allowed these things to continue for too long.”

Wind said he thought the shooting at his high school is no different than shootings that have torn apart lives in Orlando, Las Vegas, and other places across the country over the past several years.

Wind said the key difference this time around lies in the survivors’ response—and in their age.

“The difference here is that we are the ones that were locked inside the closets, texting our parents what could have been our final ‘I love you’s,’” Wind told the assembled crowd of roughly 200. “We were the ones that were sitting there praying that, when we heard knocks on our door and the glass shattered, that it wasn’t a shooter, that it was the police.”

“I don’t think this movement would be possible if we weren’t teenagers,” Wind added.

The students also spoke Tuesday about how the movement first came together. Kasky recalled that everything “started small” on his “living room floor.”

The survivors mainly wanted to prevent the Parkland shooting from becoming just one of “countless” incidents of gun violence around the country, Kasky said.

“I’ve seen this happen countless times,” Kasky said during the panel Tuesday. “What happens is we get two weeks in the news, we get a bundle of thoughts and prayers, everybody sends flowers, and then it’s over. And then people forget.”

“And I said, ‘What’s different this time? What can we do differently this time?’” he added.

The national phenomenon started in a public park. The students met up, ate pizza, and launched Emma’s now-famous Twitter account together, Beth González—Emma’s mother—said in an interview after the event.

I don't think this movement would be possible if we weren't teenagers.

Beth said many of the high schoolers initially chose not to tell their parents about their activism.

“They were creating this movement in a park with donated pizza. At no point was there any request for parental okay,” she said. “They were like, ‘I’m going to go change the law, and you think I need a permission slip?’”

The clandestine meeting in the park launched a digital snowball. Tuesday’s six panelists have racked up a collective nearly 2.1 million Twitter followers over the past month. (Emma’s account alone boasts over 1 million followers.) The students have communicated directly with politicians, fellow activists, and celebrities over social media.

The movement’s exponential growth has garnered the attention of politicians. On March 9, Florida Governor Rick Scott signed an array of gun limits into law, including legislation that raises the minimum age to purchase a firearm to 21. The new law represents a dramatic change in direction for a governor who earned an “A+” rating from the National Rifle Association across his seven years in office to date.

The speakers said Tuesday they hope more high schools will begin offering civics programs to ensure students are prepared to speak out for what they believe. Ryan Deitsch said his government teacher, Jeffrey Foster, has been a source of great support.

“We learned about the NRA that day, Feb. 14,” Deitsch said during the event. “And now we’re going head to head with them.” 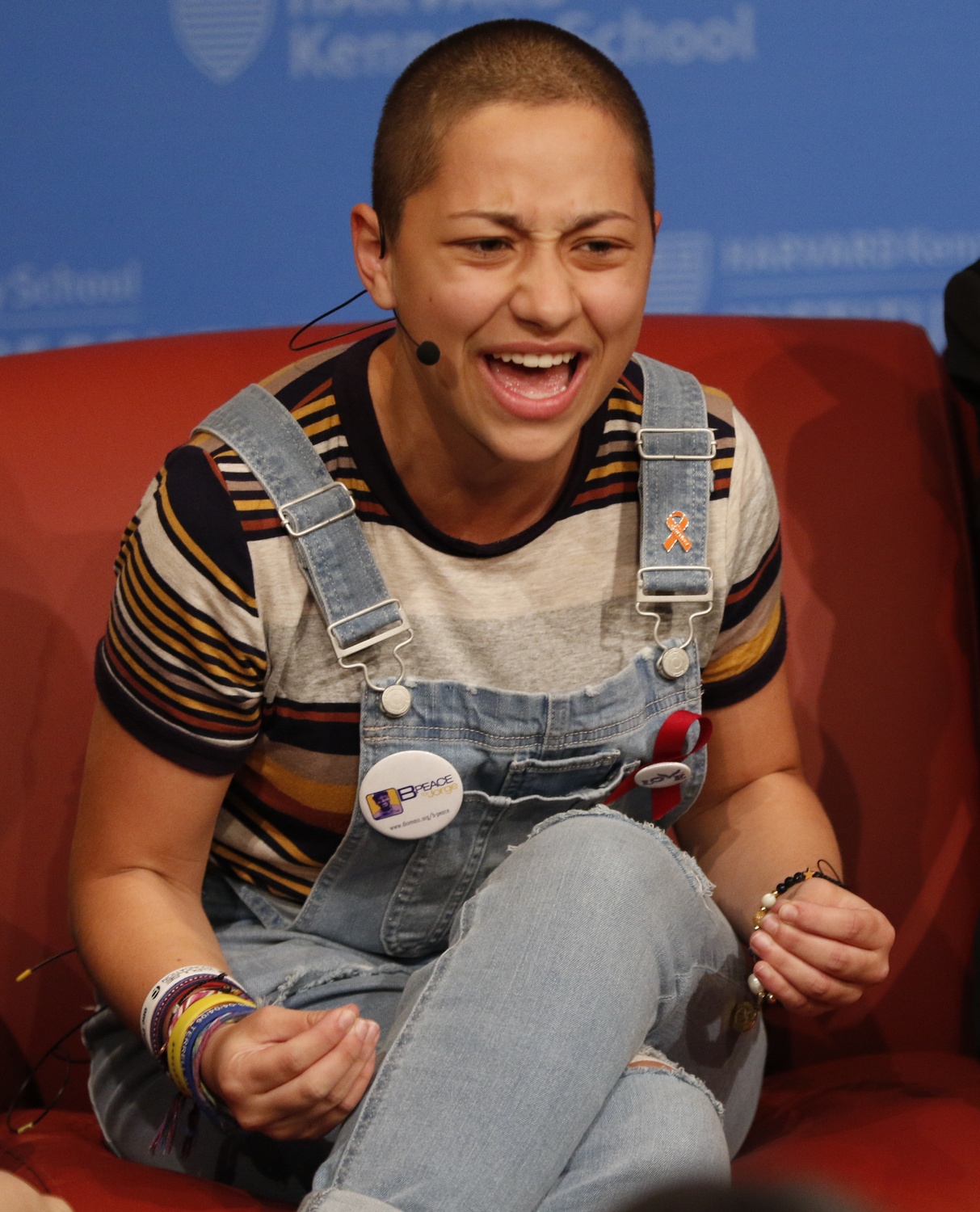 Emma González speaks at the IOP. By Timothy R. O'Meara

The students said they also hope to inspire a national cultural shift towards greater civic engagement. The high schoolers repeatedly urged eligible voters in the audience to exercise their civic rights.

“I was told today that the rate at which Harvard students vote at midterms is 24 percent, and I hope that this talk can somewhat inspire that to at least be the national average,” Matthew Deitsch said after the event. “I need the most intelligent people in the nation voting so we have more intelligent and just leaders.”

Abdelaziz N. Bahnasy ’21, who attended the event, said he was “inspired” by the Parkland students’ mission and focus.

IOP Director Mark D. Gearan ’78, who introduced the panel, said the IOP plans to host Kyle Kashuv, a Marjory Stoneman Douglas High School student who he said “has been actively supporting other legislative solutions,” at a later date.

This Saturday, the #NeverAgain movement’s planned “March for Our Lives” will kick off in cities across the nation, including Boston. The students on the panel encouraged attendees to participate.

“We’re expecting 2.5 million people marching worldwide, at least a million people in D.C. alone. Just the fact that all those people are standing in solidarity with us, and they’re unified with us, it’s absolutely incredible,” Wind said after the event. “It just shows that the people in this country are sick and tired of the normalcy of this mass shooting epidemic that we have.”