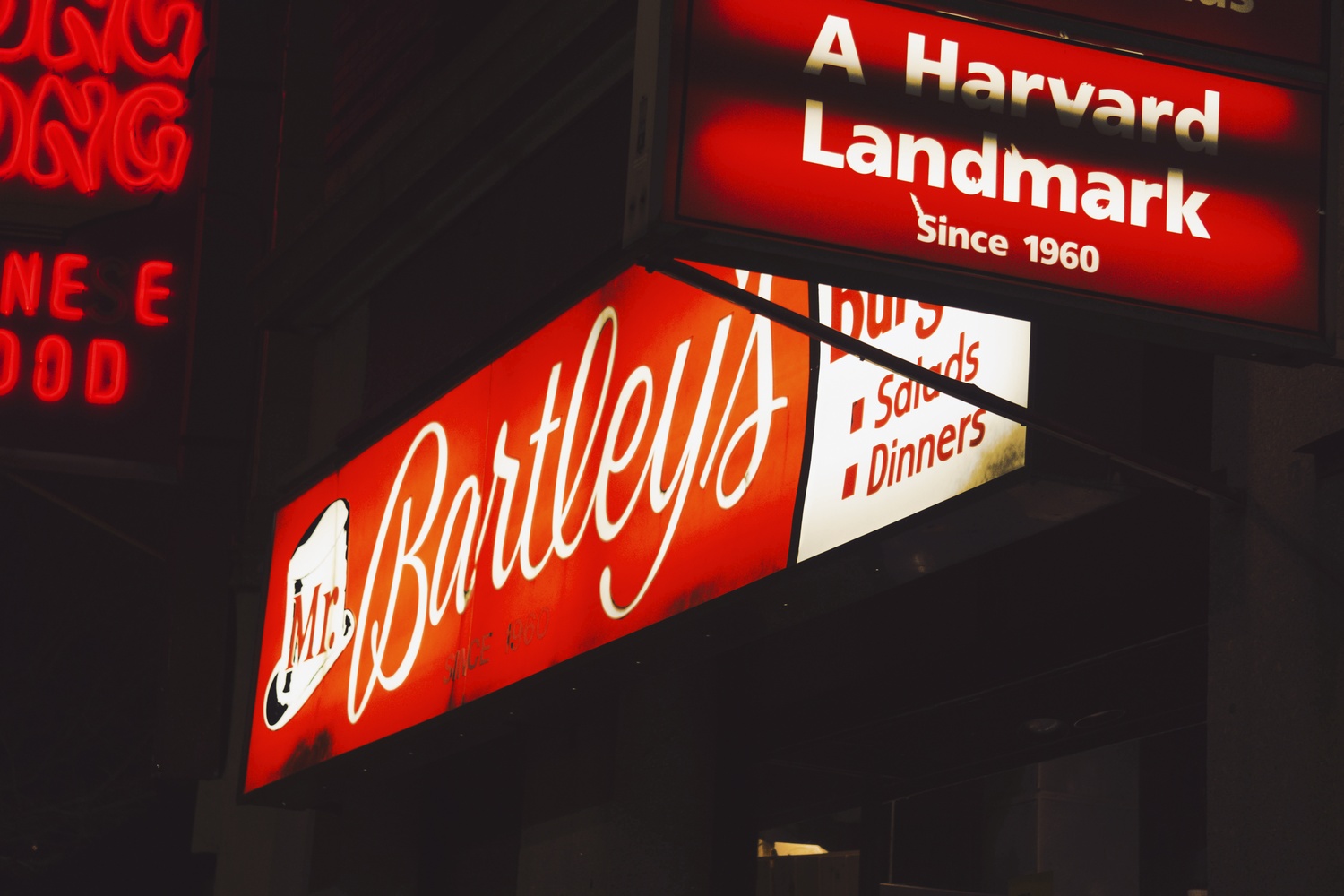 A Depression Era baby who grew up in North Andover, Bartley left school in ninth grade to support his family. He worked at a mill until he couldn’t stand it anymore, according to Bartley’s son Bill, who currently manages the restaurant. Eventually, Bartley got into the restaurant business, operating a pharmacy food counter in Long Island.

“We always say he started life from way behind the goalpost and made it past the other end with not a lot of help besides my mother,” Bill Bartley said.

In 1960, after getting together $10,000 in tip money and loans, Bartley and his wife Joan moved to Cambridge and took over the Harvard Spa convenience store on one end of Harvard Square. Bartley's Burgers—now a Harvard Square fixture and huge tourist attraction—started as a small grill that sold greeting cards and paper goods and made most of its money off newspaper sales.

Bill recalled that, when he asked his mother about their retirement plans, she said she and Bartley never imagined they would be able to retire.

“He had everything riding on it, he had five kids all together. Failure’s not an option now and it wasn’t an option then,” Bill said. “I can’t imagine what he would have done if he had been highly educated."

"There’s nothing my dad couldn’t do,” he added.

The concept of a gourmet burger restaurant was a novelty at the time, Bill said, but Bartley’s business savvy allowed the restaurant to endure for almost sixty years and to enliven an ever-changing Harvard Square. After all, “Colonel Sanders moved on to other spaces,” Bill Bartley joked, while Bartley stuck to his spot despite offers to expand into pricier real estate.

Bill Bartley said he grew up in his father’s restaurant—sometimes quite literally, his crib rocking in the back of the store. “The restaurant is a part of my family and is one of the family members my dad created,” he said.

Paul Lee, the current manager of The Hong Kong Restaurant, grew up alongside Bill Bartley as both men's fathers worked long hours at the Hong Kong and Bartley’s Burgers. Lee recalled playing catch with a tennis ball with Bartley as a kid, running over to order a hamburger for his father, and stopping by for a chat as Bartley took orders outside on warm days in later years. Once, the two restaurants shared a fridge when one of the establishments' appliances broke down.

“I’d consider him the mayor of Harvard Square,” Lee said of Bartley. “He was a character. He always had a good story for you.”

To wring success out of a fast-paced, swiftly changing business, Bartley matched hard work and perseverance with a sense of humor and one-liners like “Hot food hot,” “You can’t sell from an empty cart,” and “They eat with their eyes.” Bill recalled how his father decorated the restaurant with bumper stickers, a poster of beer cans titled “What I really learned in school,” and what he called a “cheesy” corner of Elvis memorabilia.

When his staff was feeling down, Bartley might appear with a mop on his head as a wig, Bill said. If someone didn’t show up for work, the next day he might say, “You know you should never miss work. That’s so I realize how little you do when you’re not here.”

“I started in this business because I just wanted to be with him,” Bill said. “He was that dynamic a character.”

Bartley was “a simple guy,” Bill Bartley, and rubbed elbows with everyday people just as easily as he did with celebrities like Shaquille O’Neal, Jackie Onassis, Katie Couric, and the array of politicians, sports hotshots, and academics who flocked to the restaurant to talk to “Mr. B.” Bartley loved to listen, ask questions, and chat about baseball.

Christos Soillis, the owner of nearby Felix Shoe Repair, remembered how Bartley extended friendship and kindness to him when he was a poor and hungry immigrant just getting started in the shoe repair business.

“I am lucky to be in this country, but I don’t forget yesterday. Never,” Soillis said. “There is no replacement for people like Mr. Bartley.”

Sollis recalled how Bartley sometimes let it slide when he couldn’t quite afford a hamburger. He said Bartley gave him advice on navigating the English language, on the economy of the Square, and on customer service.

“If you have somebody you trust, you find is honest, don’t lose it,” Soillis said. “You do the best you can, you do as much as you can to keep it.”

A devout Catholic, Bartley attended mass every day, insisted on closing on Sundays, and stubbornly served up Lent specials even when they didn’t sell very well.

Away from the bustle and ringing phones of the job, Bartley led a much quieter life in his rare time off from his “Mr. B” persona. He worked on menu ideas, treated his family to seafood on Sundays, or took walks through the streets of Cambridge and Boston or at his beach cottage in Seabrook, N.H.

He had “just a giant heart and he loved to laugh,” Bill said.

Beyond just concocting burgers, Bartley was “the best cook I’ve ever met,” Bill said. Bartley's corn chowder was unparalleled, his son said, though it was eventually replaced by clam chowder on the menu due to tourist demands.

Bartley made a legacy out of naming different burgers at his restaurant after politicians and prominent figures. His son carries on the tradition, with burgers currently on the menu sporting monikers like the “Siriously delicious” iPhone to the “way right and way wrong” Mike Pence burger, though Bill said his father disagreed with some of the more biting names.

For all the elaborate burgers he designed, Bartley’s favorite was just a bun and a medium-rare patty–but it better be done right, Bill said.

“It’s going to be quite an adjustment, but with his faith I’m sure he is in a good place,” Bill said. “And he’ll be criticizing what we’re doing on a daily basis, I’m sure.”

Bartley is survived by his wife Joan and their five children, Kathryn, Joseph Jr., Bill, Robert, and Christopher.

— Staff writer Sofia W. Tong can be reached at sofia.tong@thecrimson.com.