Women’s Lacrosse Fails to Hold onto Halftime Lead Against UMass 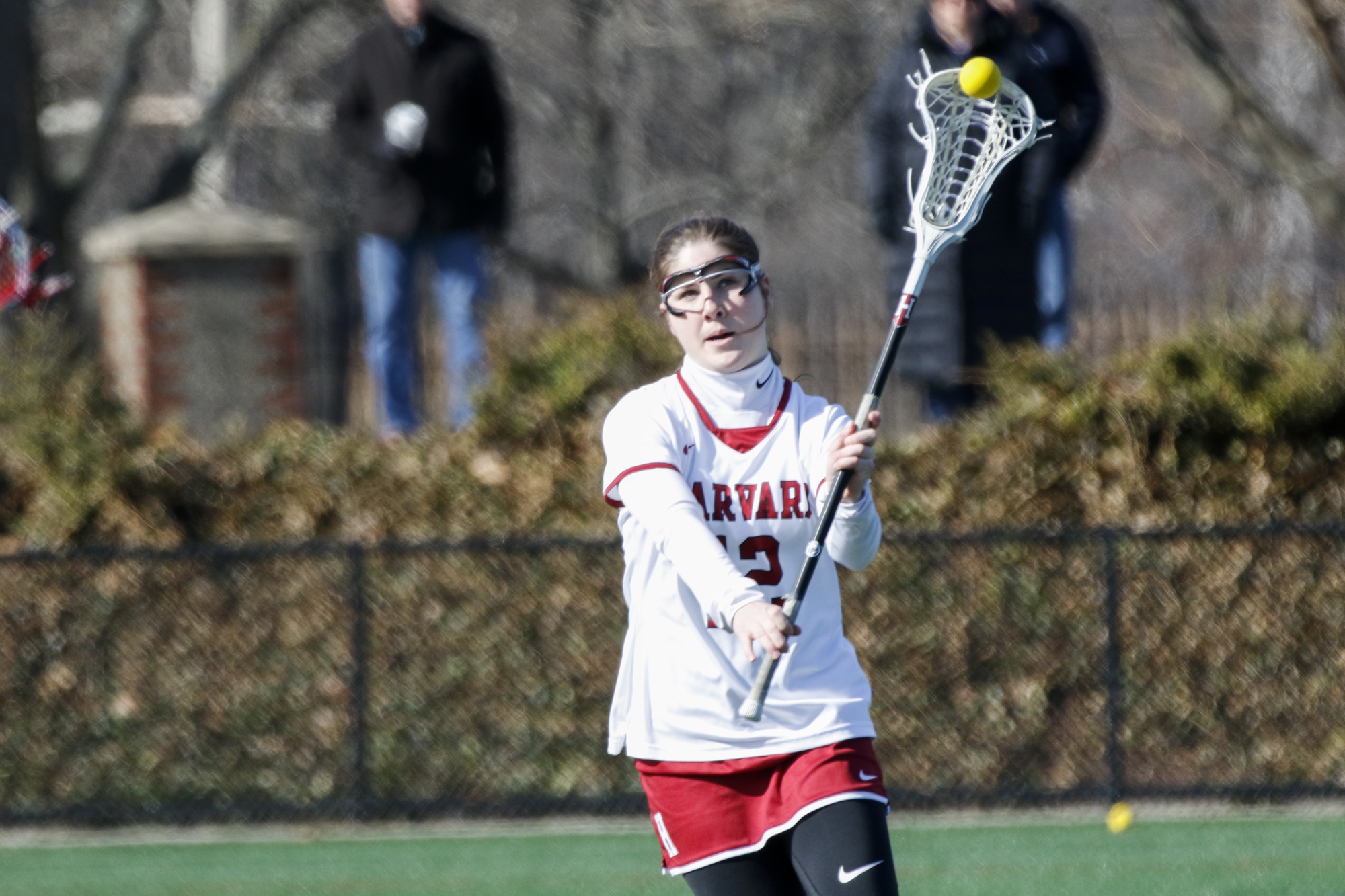 In an effort to forestall playing in the snow, the Harvard women’s lacrosse match against the University of Massachusetts, Amherst, was delayed 24 hours on Wednesday. In effect, the team missed a calm afternoon and instead squared off in the heart of what little storm the Nor’easter provided.

On the snowy Thursday afternoon, the Crimson (3-4, 0-1 Ivy) squad fell 22-17 to its Minutewomen opponents at Richard F. Garber field in Amherst, Mass. Though Harvard led at the break, a stellar second stanza by UMass (5-3) carried the team to victory.

In a game characterized by runs for both teams, the Minutewomen began the second half with a streak of goals that established a lead they never again relinquished. As the second set of thirty minutes began, a goal from senior midfielder Julia Glynn—assisted by Nicole Baiocco—three minutes in pushed the lead to five and the score to 12-7.

UMass controlled the ensuing draw, the Crimson fouled, and in the 18 seconds following Glynn’s point, the Minutewomen had negated the point. The team never looked back. UMass scored again in 42 seconds, and again in 38. Netting eight of nine points in an 8:34 time frame, the Minutewomen claimed a 15-13 lead with a quarter hour to play.

“We started winning draws, which was key,” said UMass head coach Angela McMahon in an interview with the Daily Collegian. “I felt like a good amount of the shots we were taking were high quality, therefore translating into more goals. For us to win the draw, score the goal, win the draw, we were able to create some good momentum there and we fed off that energy.”

The match began favorably for those in crimson and white. UMass rocketed three straight goals before Harvard sophomore attacker Hannah Keating stopped the skid with her ninth goal of the season. Assisted by Tessa Queri, Keating’s strike was followed by one more Minutewomen point before the Crimson’s first period run. Junior midfielder Keeley MacAfee squeezed a shot by UMass’s Lauren Hiller, cutting the home team’s lead to two. An offensive onslaught followed. The six-point run finished with Harvard up, 7-4.

Throughout the first half, the Crimson outscored its opponent by four, with 11 points to the Minutewomen’s seven. The second frame showcased a spirited UMass performance to make up that difference, with the team notching 15 goals to the Crimson’s six.

After UMass’s 8-1 streak, Harvard pushed the margin to one point twice more, first closing the gap to 15-14 and then again to 18-17 with 4:39 remaining. Battling to either tie or grow the lead, the opponents fought for the advantage. A foul from Crimson sophomore defenseman Tate Green granted them Minutewomen just that in the form of a free position attempt. Holly Turner was golden on the shot, drawing UMass’s lead to two. By the final buzzer, that had increased five.

In a game that was far closer than the final score indicated, Glynn recorded a team best seven goals, increasing the senior’s season total to 30.

“We scouted [Glynn] a lot and she came out ready to play,” said UMass junior Holly Turner to the Daily Collegian. “At halftime we just made the adjustment of getting on her hands and stick and making sure to play body and not going for the check.”

MacAfee led the team in points, adding five goals and three assists to the stat sheet. Junior attacker Nicole Baiocco matched MacAfee’s team-high three assists. Queri contributed three goals of her own, tacking a single assist on to her total.

Manning the net, senior classmates Meredith Brown and Olivia Gundrum split their time. The former managed to get between the ball and the goal twice while Gundrum tallied six saves and four ground balls.

Also on defense, rookie Celia Concannon tied her own career high with four ground balls and two caused turnovers. In ground balls, Harvard held an 18-13 advantage over its opponent. In every other category, UMass carried the day. Marginally outpacing Harvard 41-38 in shots on goal, 6-2 on free position shots, 10-8 on saves, and 22-19 on draw controls. The Crimson also committed three more turnovers than UMass.

The loss—Harvard’s third in four games—comes as the team prepares for a two-game slate of divisional play. With the team traveling to New York to battle Columbia on Sunday and hosting Dartmouth the next Saturday, Ivy League play has arrived.