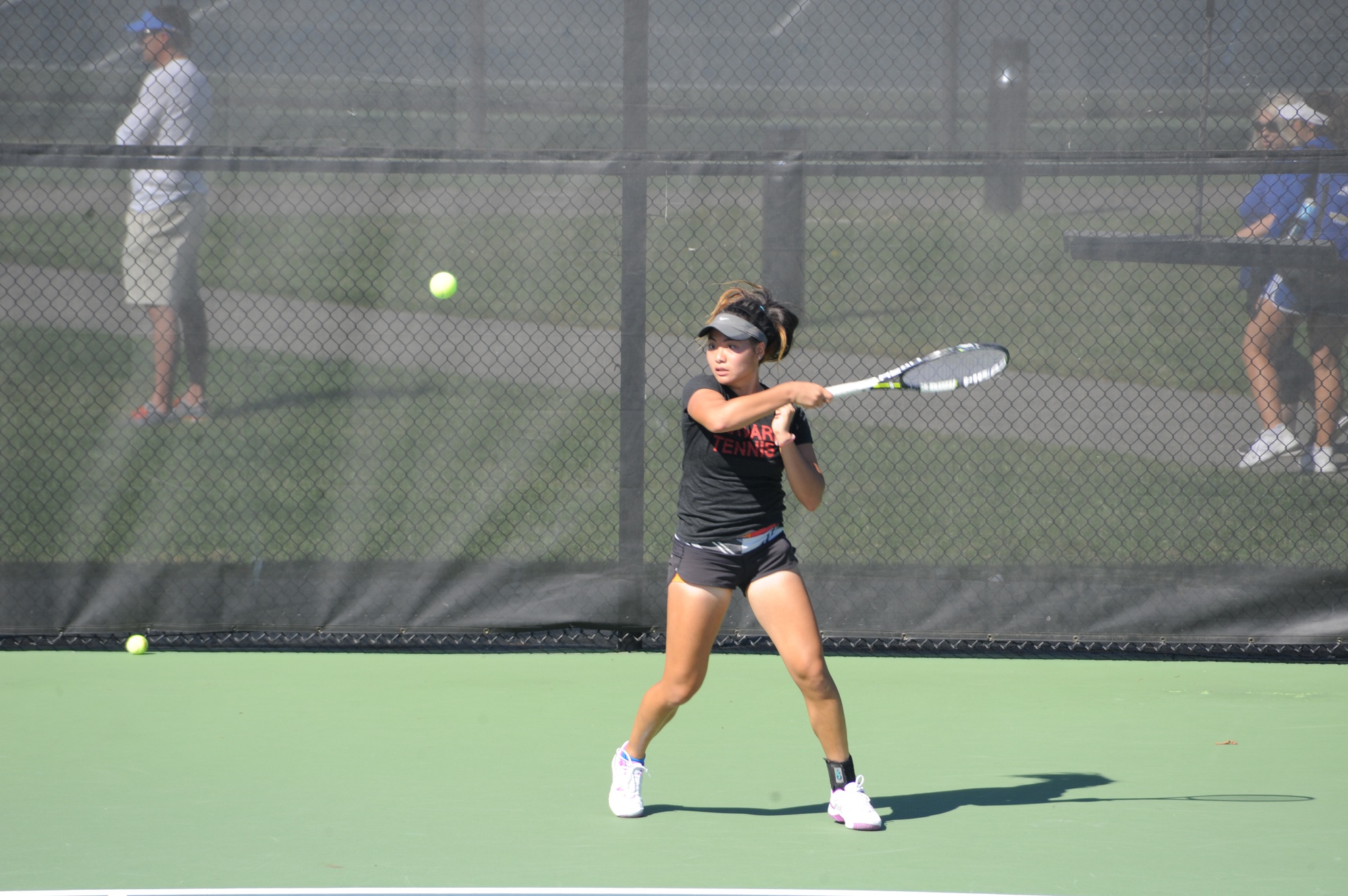 The Crimson extended its winning streak to two matches with its victory on Sunday. By Matthew W DeShaw
By Ronni Cuccia, Contributing Writer

The Harvard women’s tennis team moved back to .500 on Sunday at home against Quinnipiac, improving its record to 8-8. This matchup against the Bobcats (8-6, 3-0 MAAC) was also the last one before Ivy League play begins next Saturday when the Crimson visits Dartmouth in Hanover, N.H. The win against Quinnipiac comes off a spring break trip to Southern California.

With wintry conditions still prevailing in the Boston area, the match was held on the indoor courts at Harvard’s Murr Center. The Crimson dropped just one individual match on the day, eventually triumphing, 6-1. Overall, Quinnipiac boasts a winning percentage of .571 and is undefeated in its conference.

Harvard won its first point of the day by sweeping Quinnipiac in doubles. Junior Erica Oosterhout and sophomore Natasha Gonzalez beat Dominique Vasile and Proyfon Lohophaison in second doubles by a score of 6-3. Another significant win in doubles was from captain Annika Ringblom and freshman Anna Li. The duo won, 6-4, in first doubles.

On court two, sophomore Jenna Friedel took on the Bobcats’ Jennifer Lu in second singles. As Friedel and Lu battled back and forth in the second set, Friedel yelled words of encouragement to herself before the start of nearly every point. Her teammates, lined up in a row on a neighboring court, matched her intensity and cheered her on.

“Jenna’s a fighter, always has been,” Green said. “The team gets fired up when she gets pumped up. It definitely helps us. Sometimes she channels it the right way, and she’s been working on that. It’s been going the right way the last few weeks, and we’re going to build off that for sure.”

Ultimately, Friedel’s high-energy effort paid off, as she beat Lu in two sets, 6-2, 6-3, at the second singles position.

A few other players stood out in singles play, including Gonzalez. She won three straight games in the second set of fourth singles to defeat Layla Rodriguez. Oosterhout earned her 16th singles victory over Dominique Vasile in first singles, 6-1, 6-0. Ringblom won her third singles match as well and as coach Green said, she helped bring the energy needed to motivate other players.

On Saturday the Crimson will face Dartmouth in its first Ivy League match. Last year, Harvard defeated a Dartmouth team that was ranked 44th in the nation, 4-3. Last year Harvard ended its season with a 17-8 record and a 5-2 record in conference—only losing to Cornell and Penn.

“Our focus all season has been to improve each day and practice and in matches we are doing just that,” Green said. “So as long as we stay on track and keep the right attitude good things will happen.”

The players have similar aspirations of improvement as their coach.

“Our goals for the rest of season are to compete as hard as we can in each of our remaining matches,” Jasper said. “The ultimate goal is to win Ivies and get a berth to the NCAA, but we will take it one match at a time. We need to control the things we can control and be ready for any obstacles—injuries, wind, sun—whatever comes our way. The most important thing is being supportive of each other, whether we are on the court playing or on the sidelines cheering. We win as a team and lose as a team.”