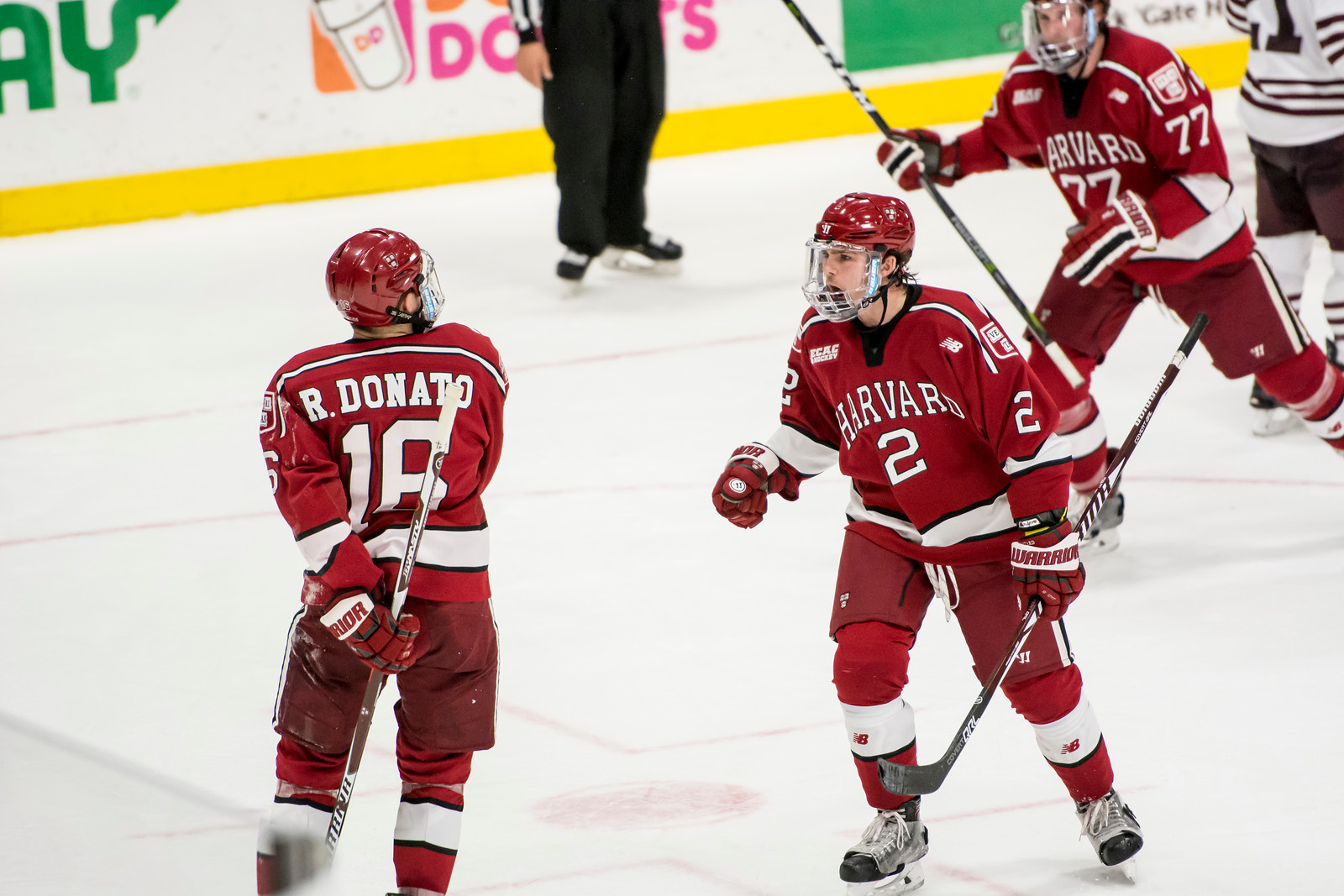 Your 2017-2018 Crimson. After graduating the nation's highest-scoring senior class (193 points) back in May, Harvard faced the formidable task of retooling its roster in order to remain in the NCAA's top five, where it began the season. 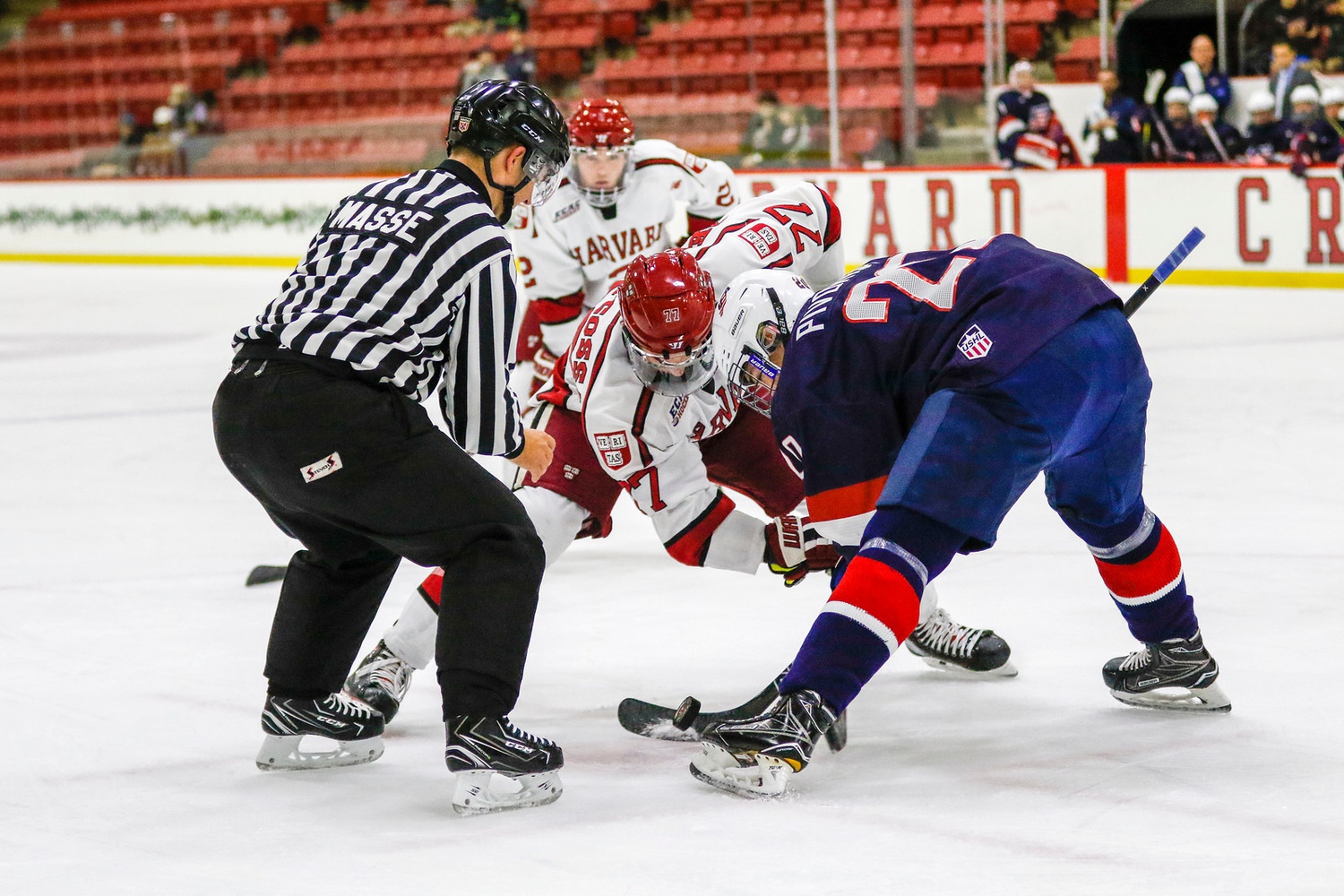 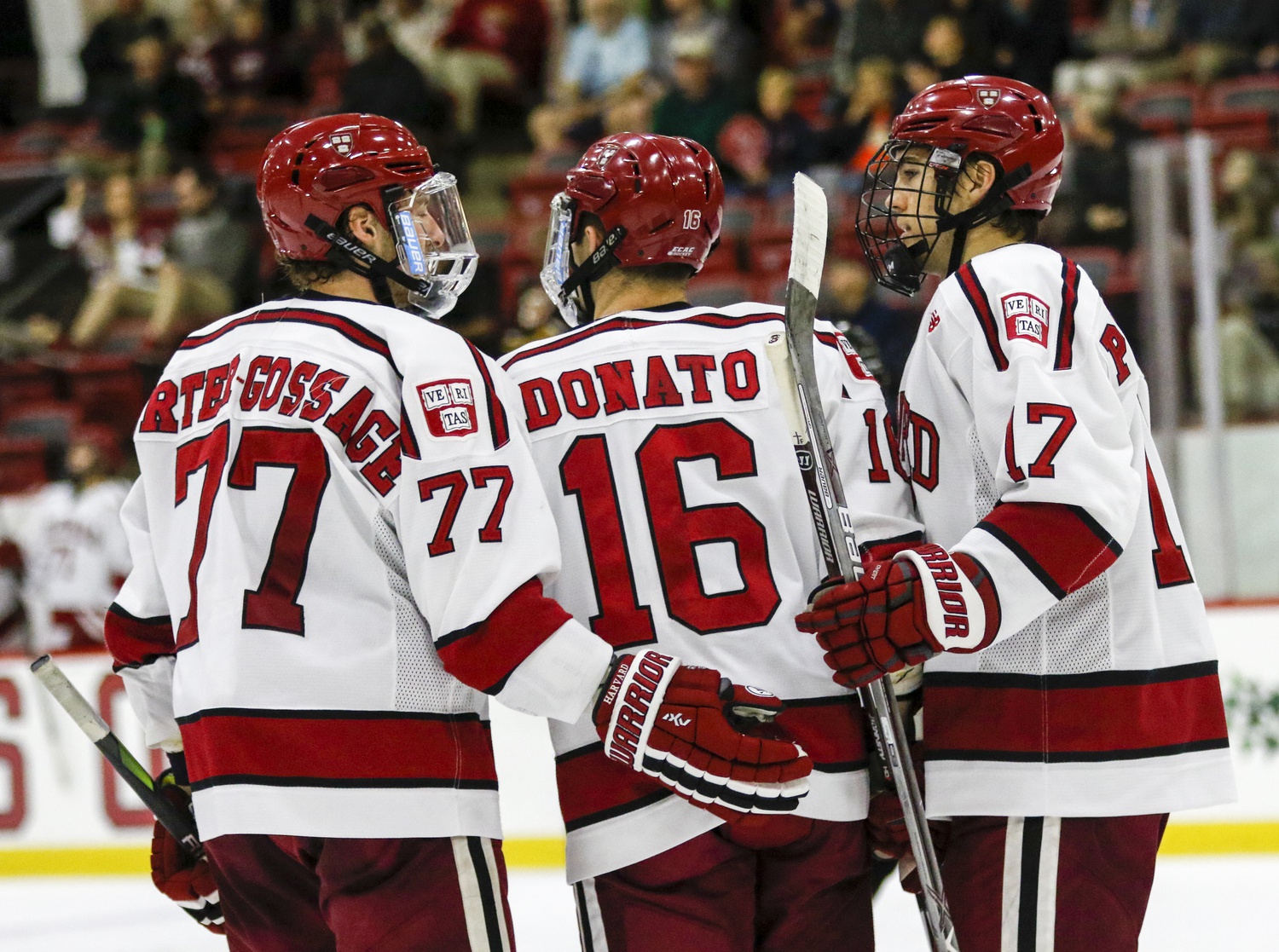 In mid-October, the Crimson prepared for its upcoming campaign with a scrimmage against the U.S. National Team Development Program (U-18). Coach Ted Donato '91 readied his lines for opening night after he saw the talent he had at his disposal. 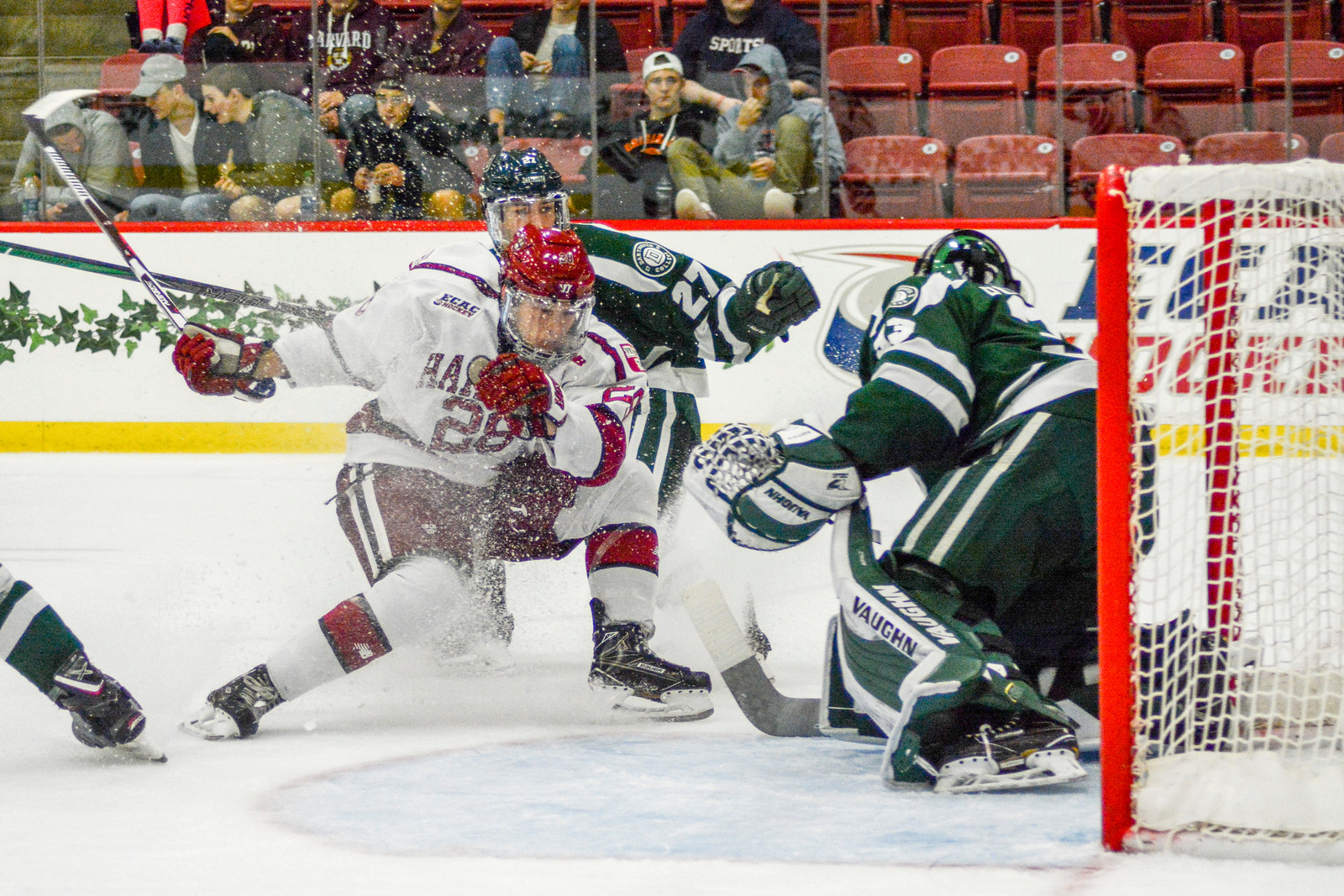 By Maxime A. Harrington

Harvard finally kicked its season off on Oct. 29 in a rare Sunday matchup vs. Dartmouth. The Crimson nabbed a 5-0 shutout victory. 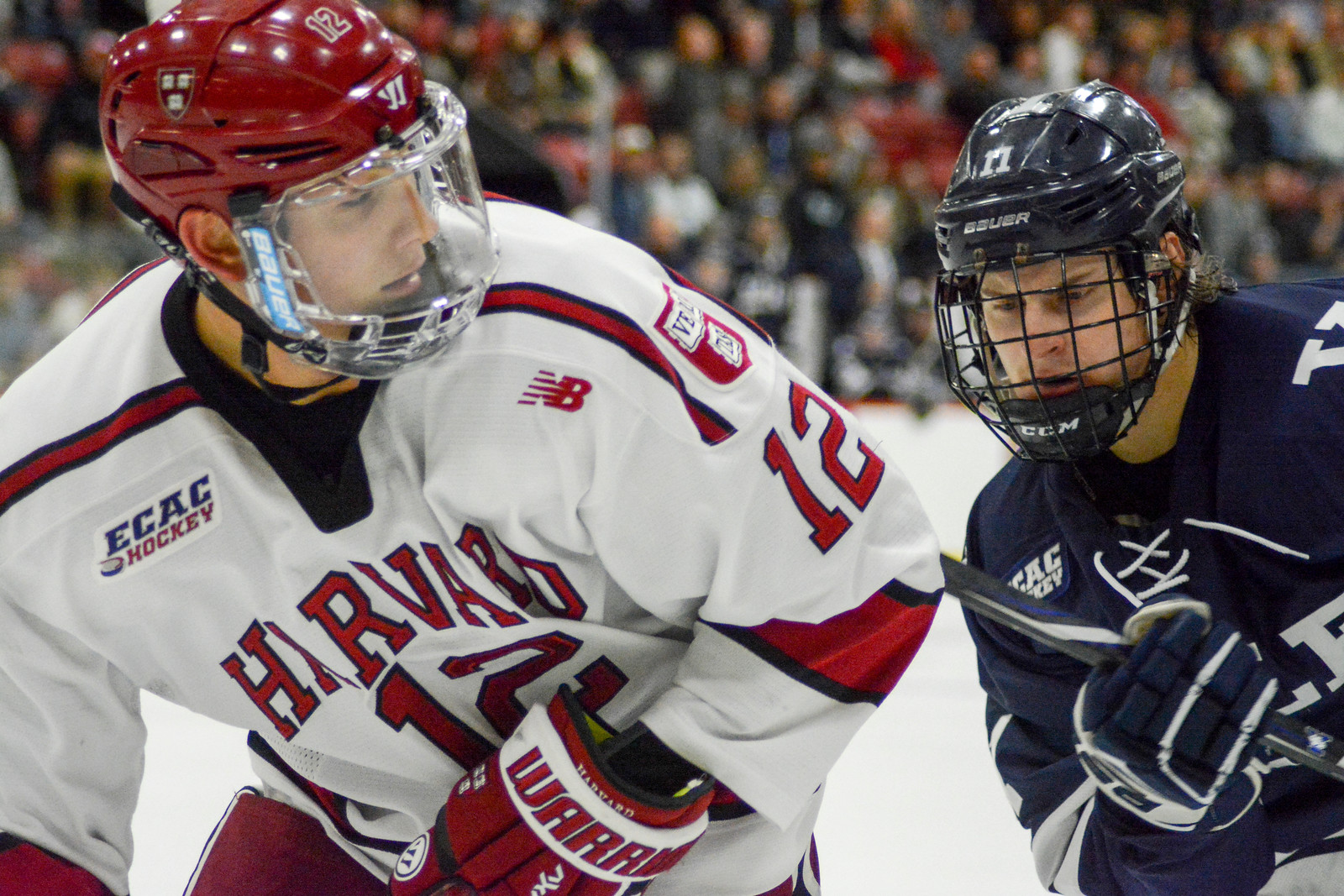 The winning did not last long, however. Storied rival Yale came to Cambridge and stunned a then-No. 3 Harvard squad. After the Crimson went unbeaten in four matchups with the Bulldogs last year, the early-season defeat served as a wake-up call. 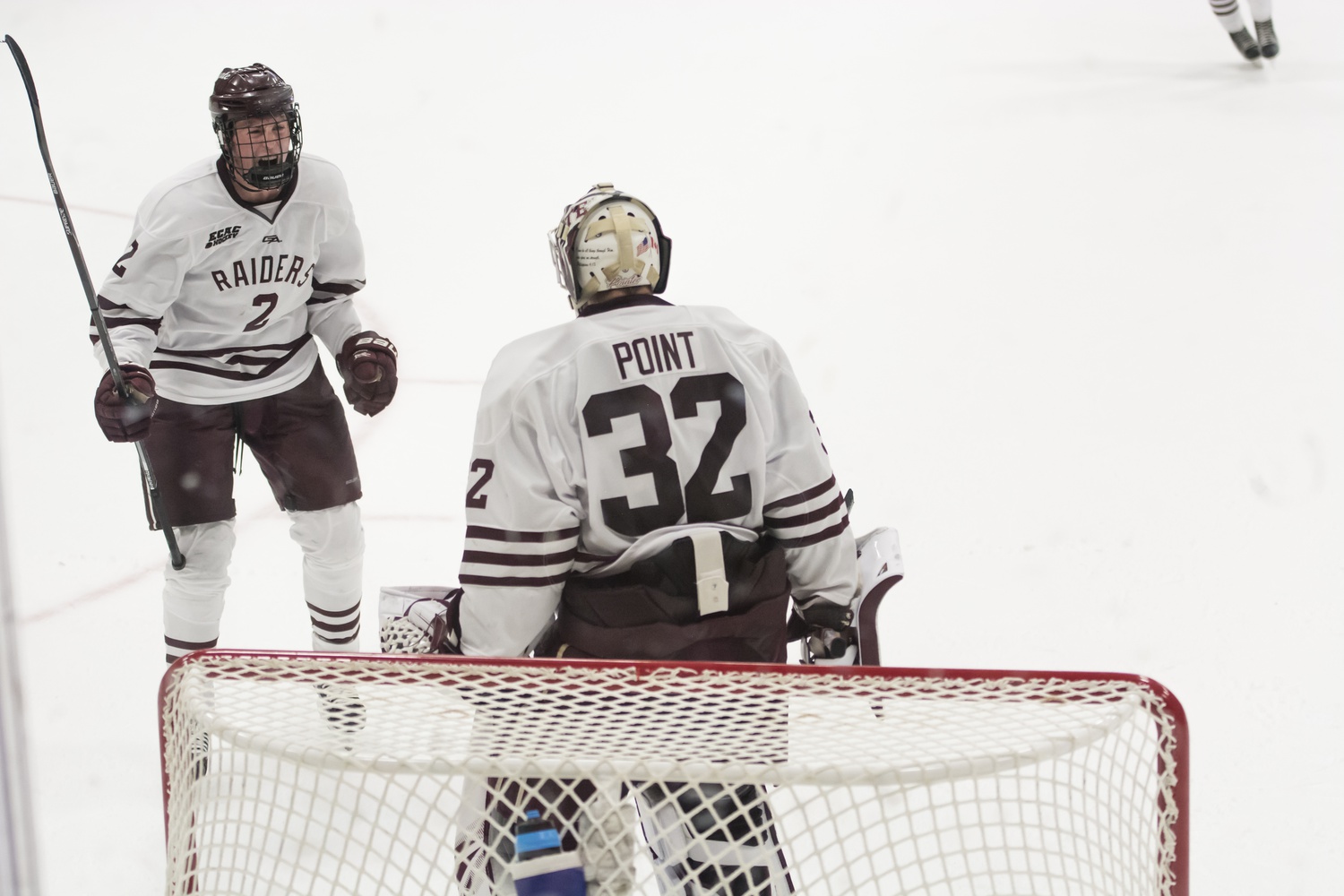 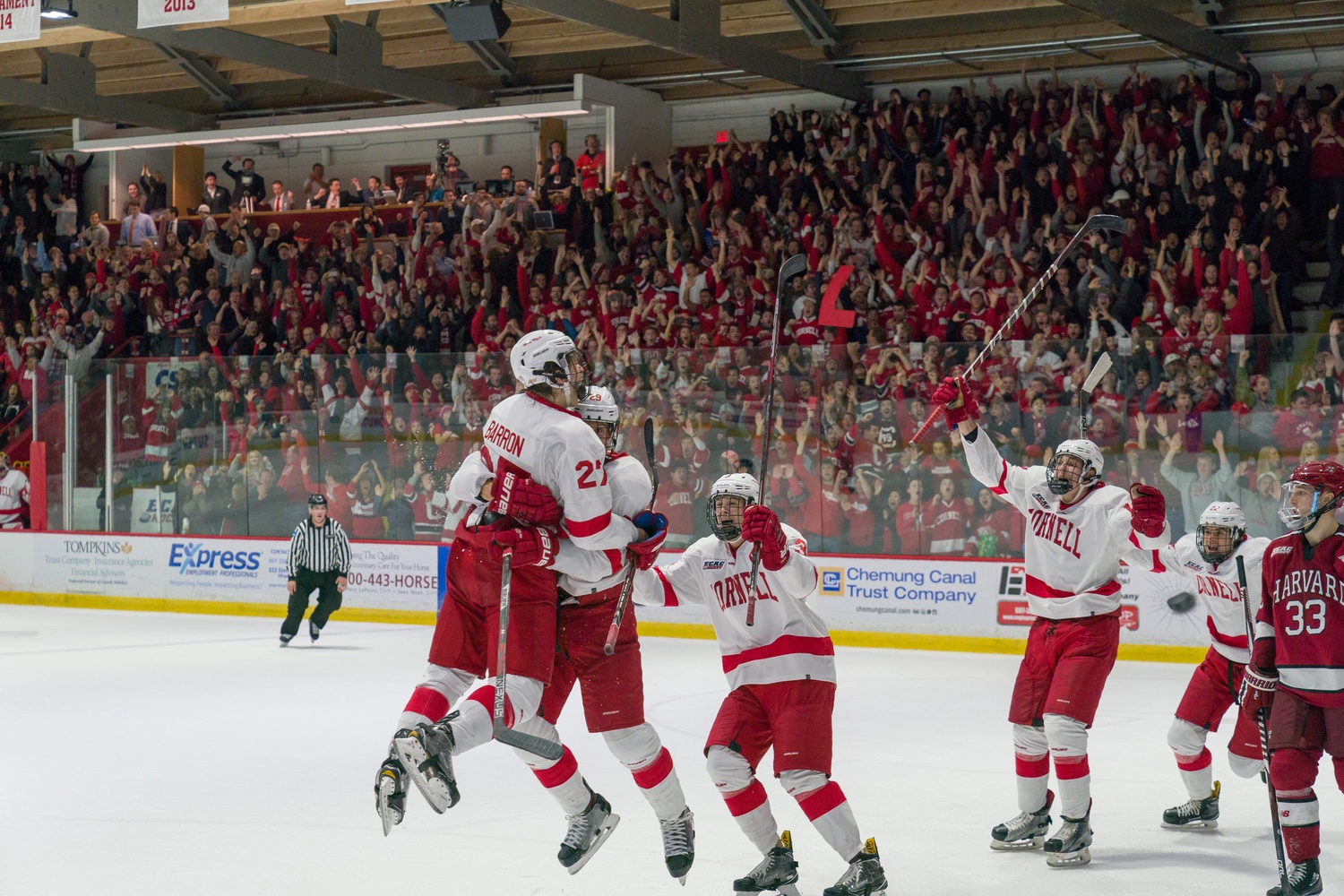 Harvard soon hit the road for a program-record nine-game away stretch. The first stop on this road trip was Colgate, where net-minder Colton Point (1 GA, 30 SV, .968 SV%) carried the Raiders to victory. The frustrated Crimson continued on to Cornell the next night, where Alec McCrea potted the game-winner with just 2.3 seconds remaining. 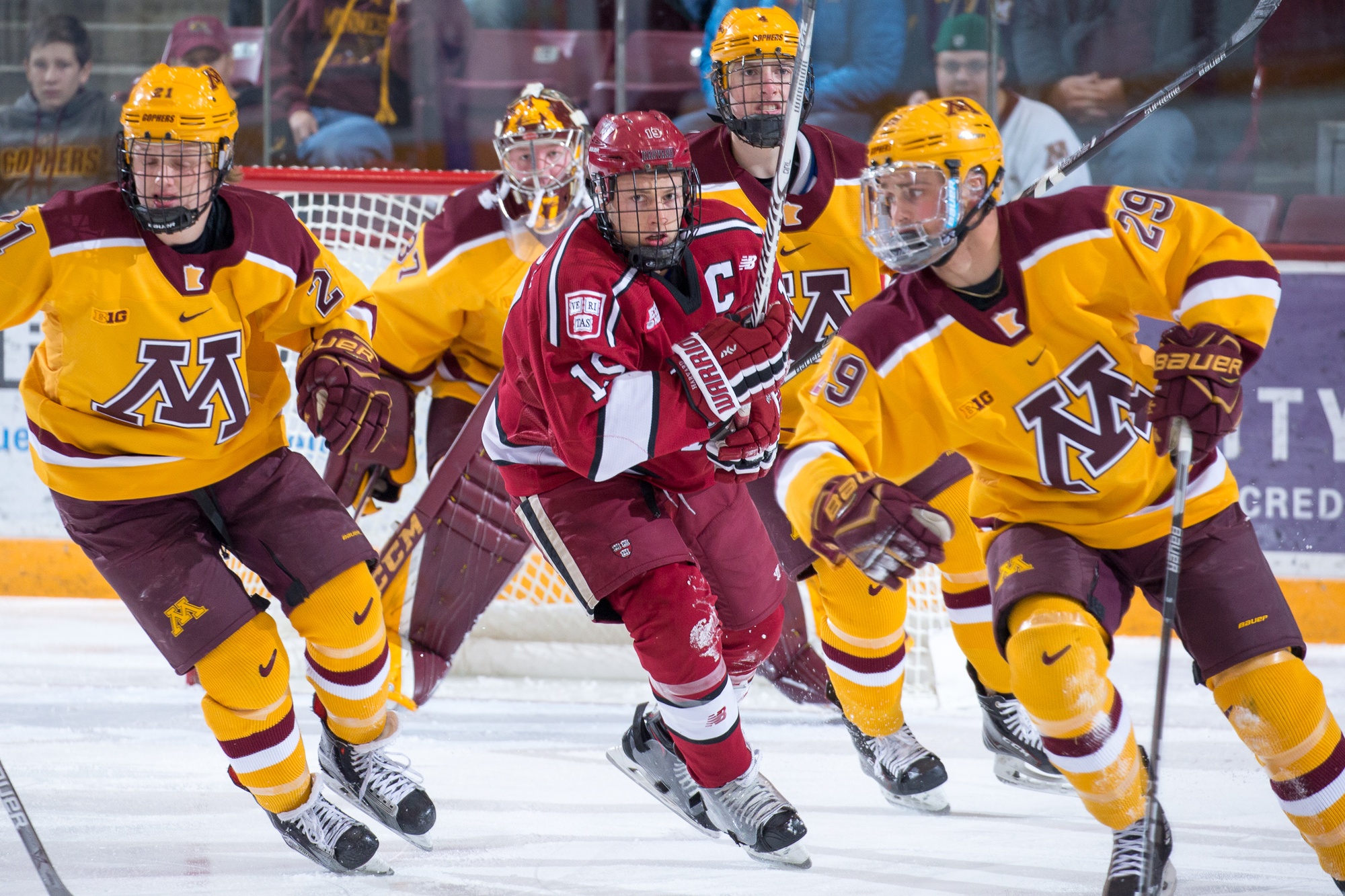 By Courtesy of Jim Rosvold/USCHO

The team's Minnesota natives, including tri-captain Jake Horton (pictured here), had their homecoming weekend spoiled by a pair of losses at the hands of the Golden Gophers. The defeats marked Harvard's first four-game skid since Feb. 7, 2015. 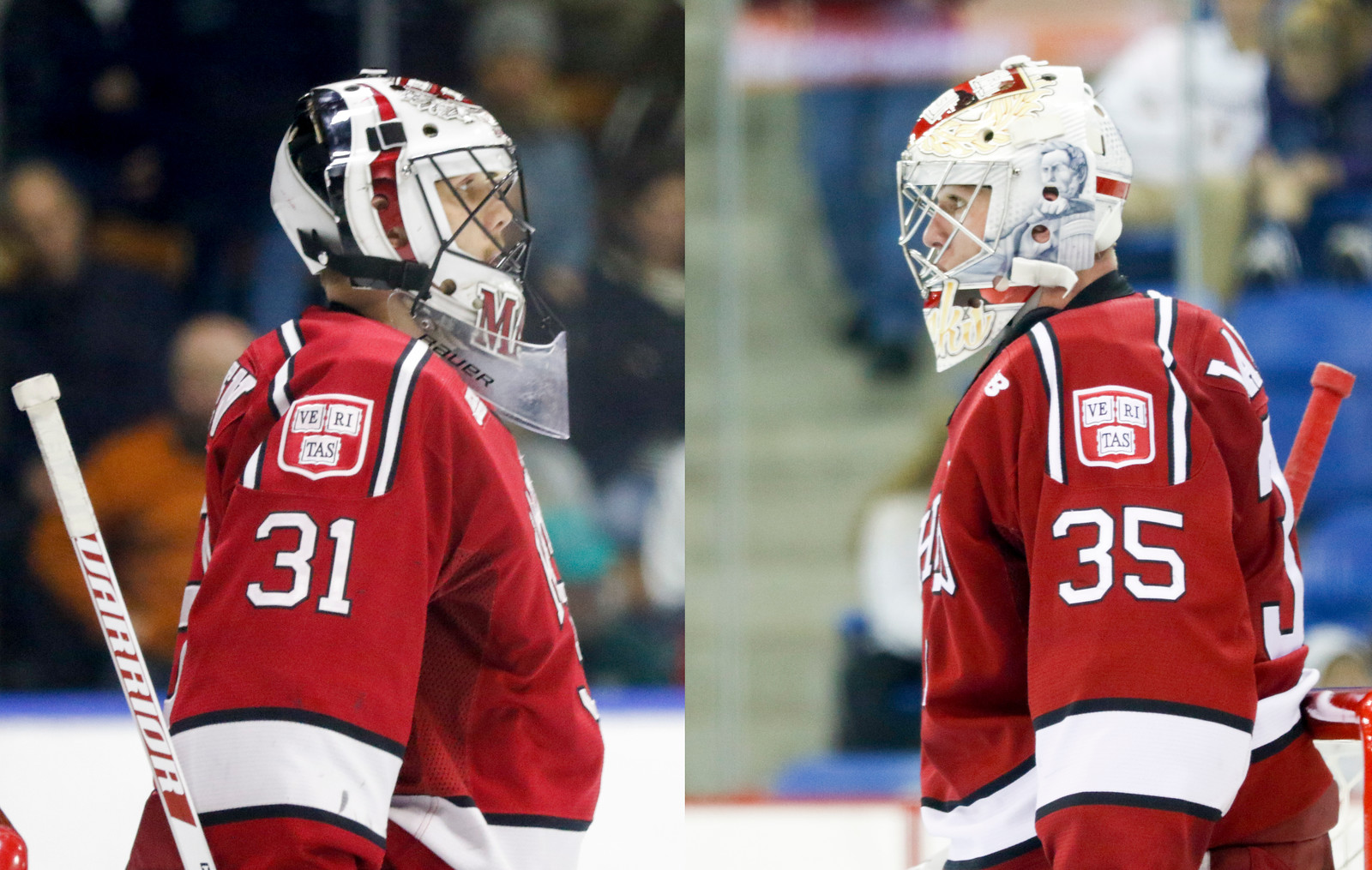 The Crimson soon dropped out of the USCHO top-20 rankings for the first time in over 70 weeks. Backup net-minder Michael Lackey logged wins over Quinnipiac and Princeton in early December, initiating a battle for the starting role between Lackey (right) and tri-captain Merrick Madsen (left). 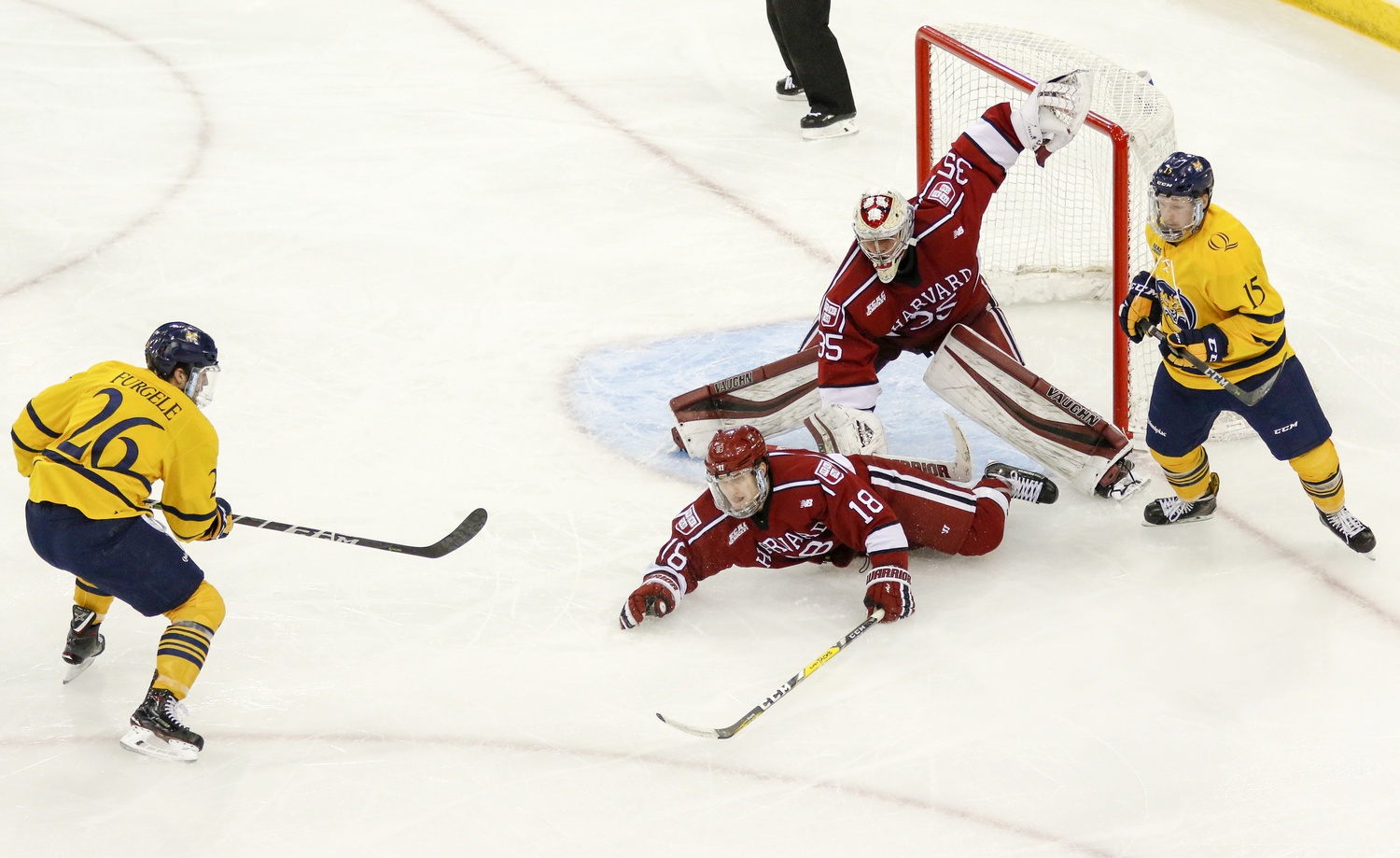 Lack Attack at the Pac - 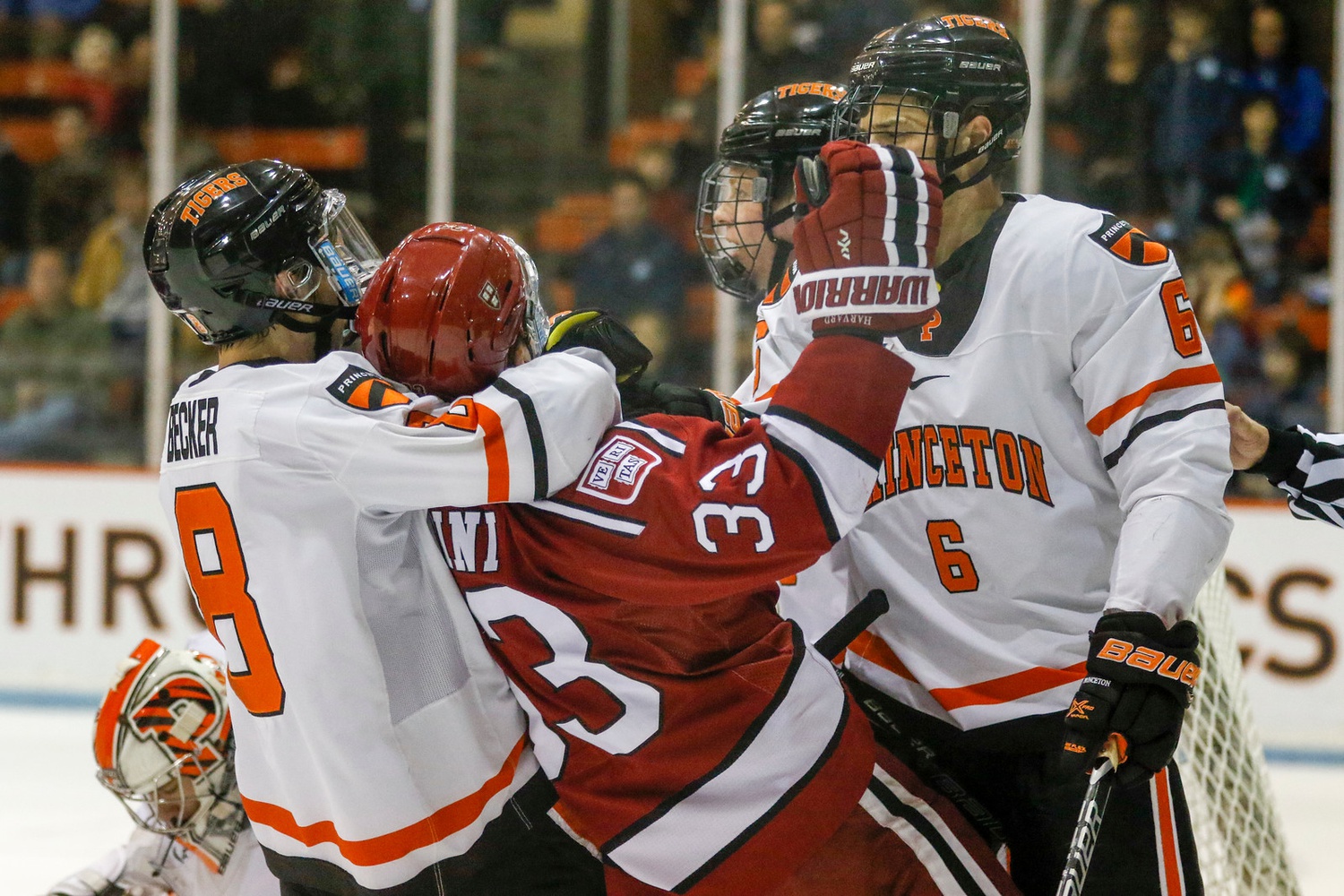 Regardless of the growing uncertainty between the pipes, the triumphs that weekend helped steer the Crimson back toward its winning ways. 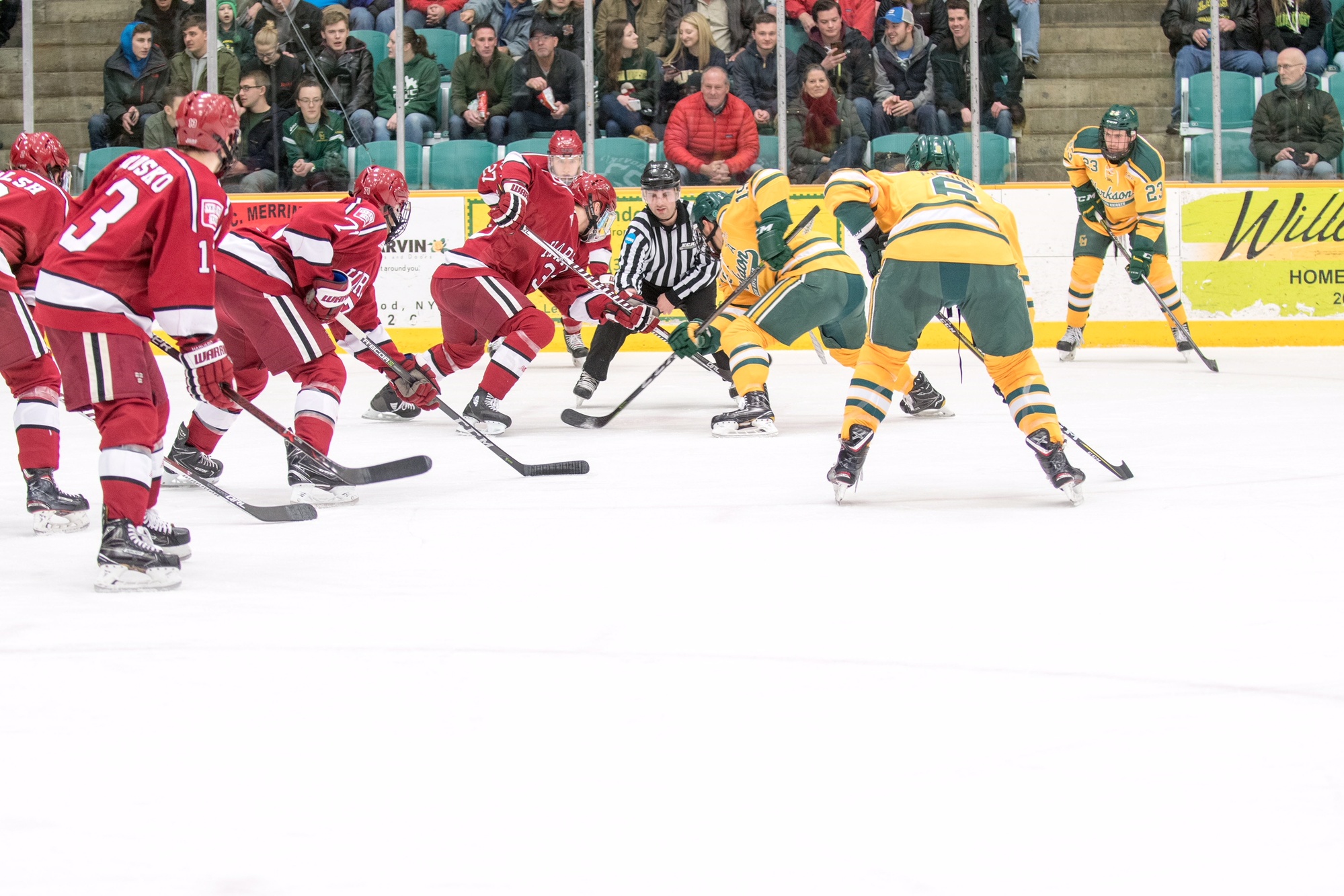 By Courtesy of Clarkson Athletics

Harvard continued its promising start (3-0-2) to 2018 when it skated to a thrilling 6-6 tie against then-No. 2 Clarkson. The performance, while worth just a point, showcased the Crimson's ability to beat any team on any given night. 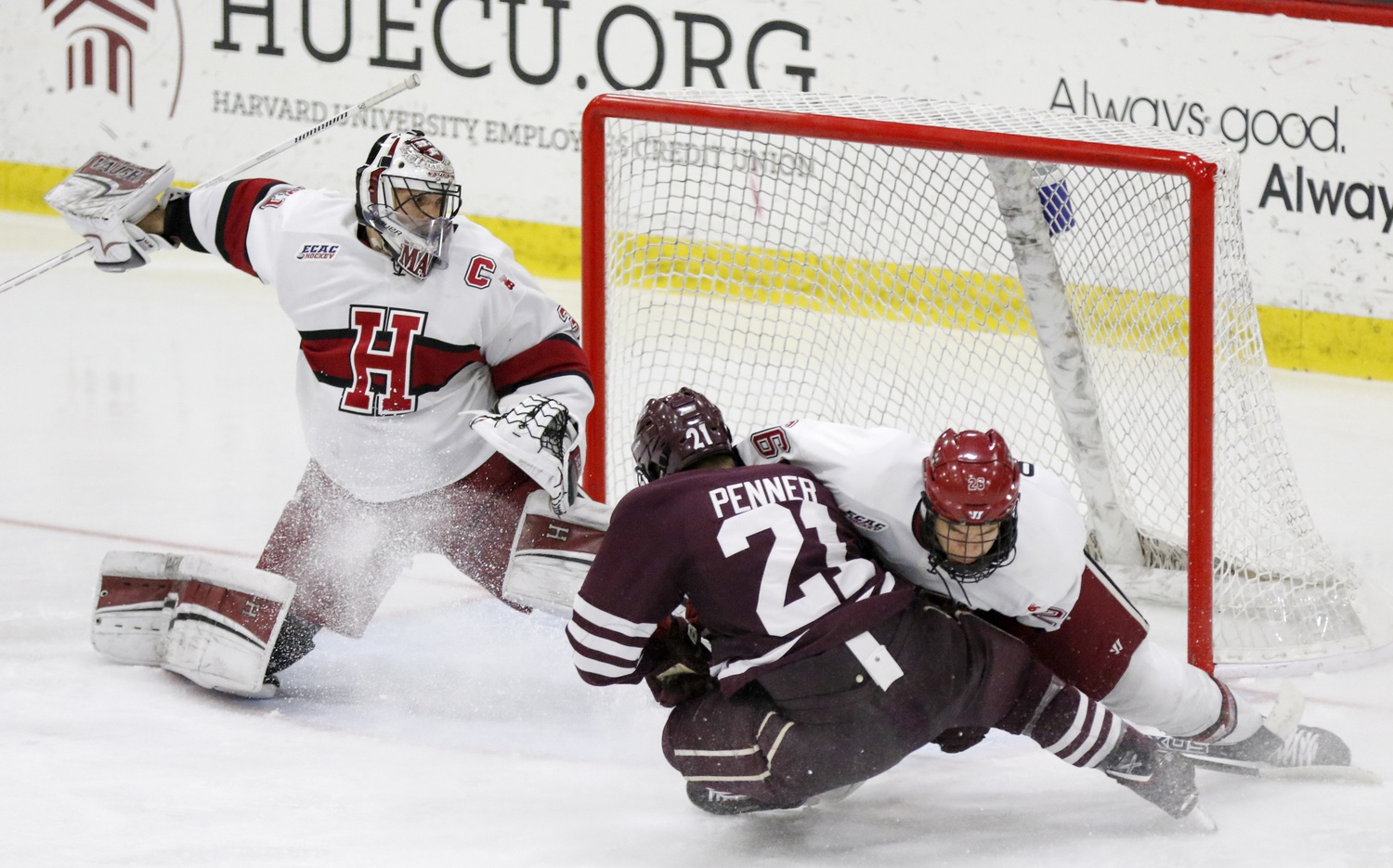 Trying to Hold Them Off - 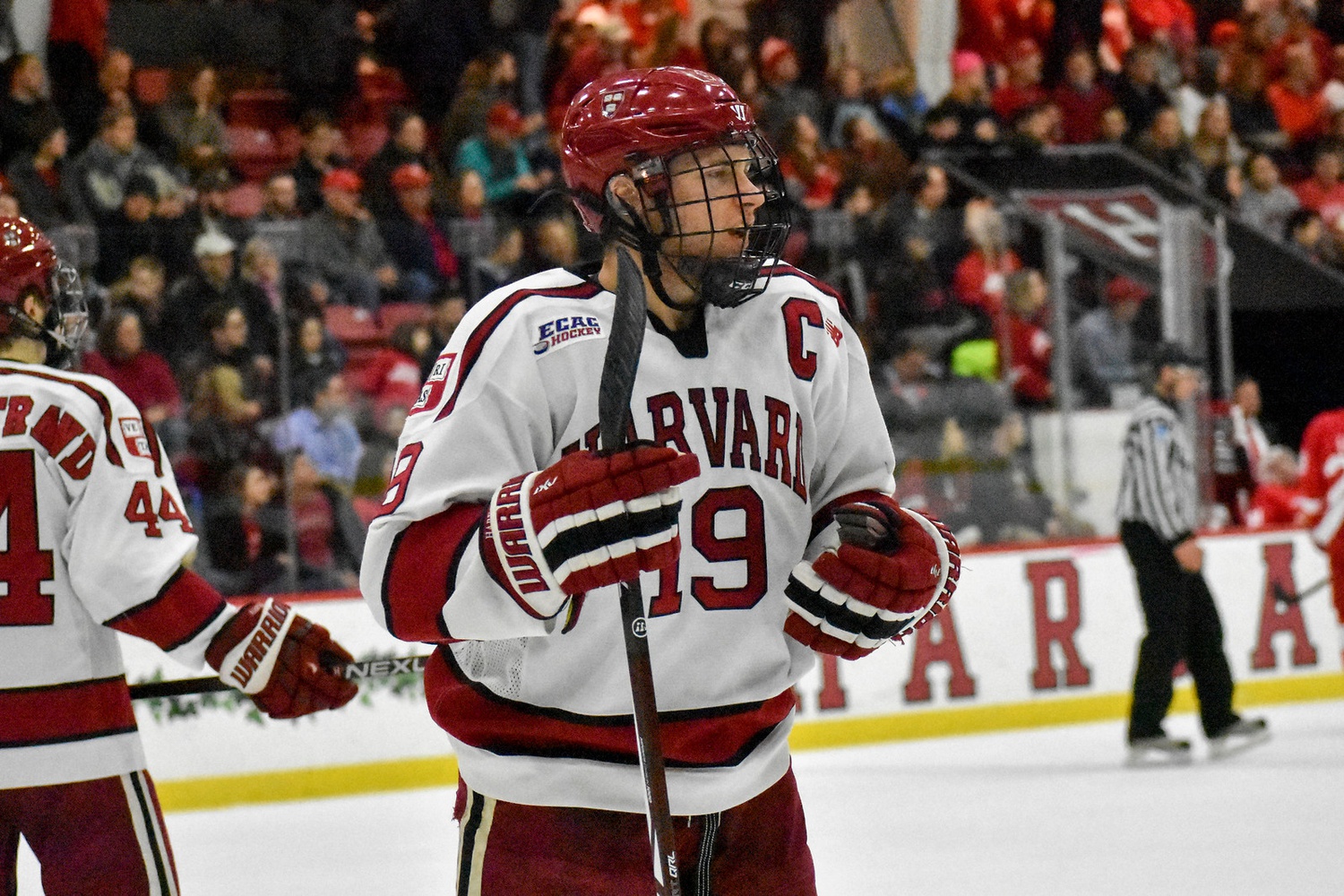 Where Did All the Goals Go? -
By Amanda M. DiMartini and Timothy R. O'Meara

In late-January, then-No. 2 Cornell and Colgate came to the Bright-Landry Hockey Center, with the Crimson looking to avenge the November weekend that derailed the team's season early on. Harvard, though, did not find the back of the net all weekend, and the frustration mounted. 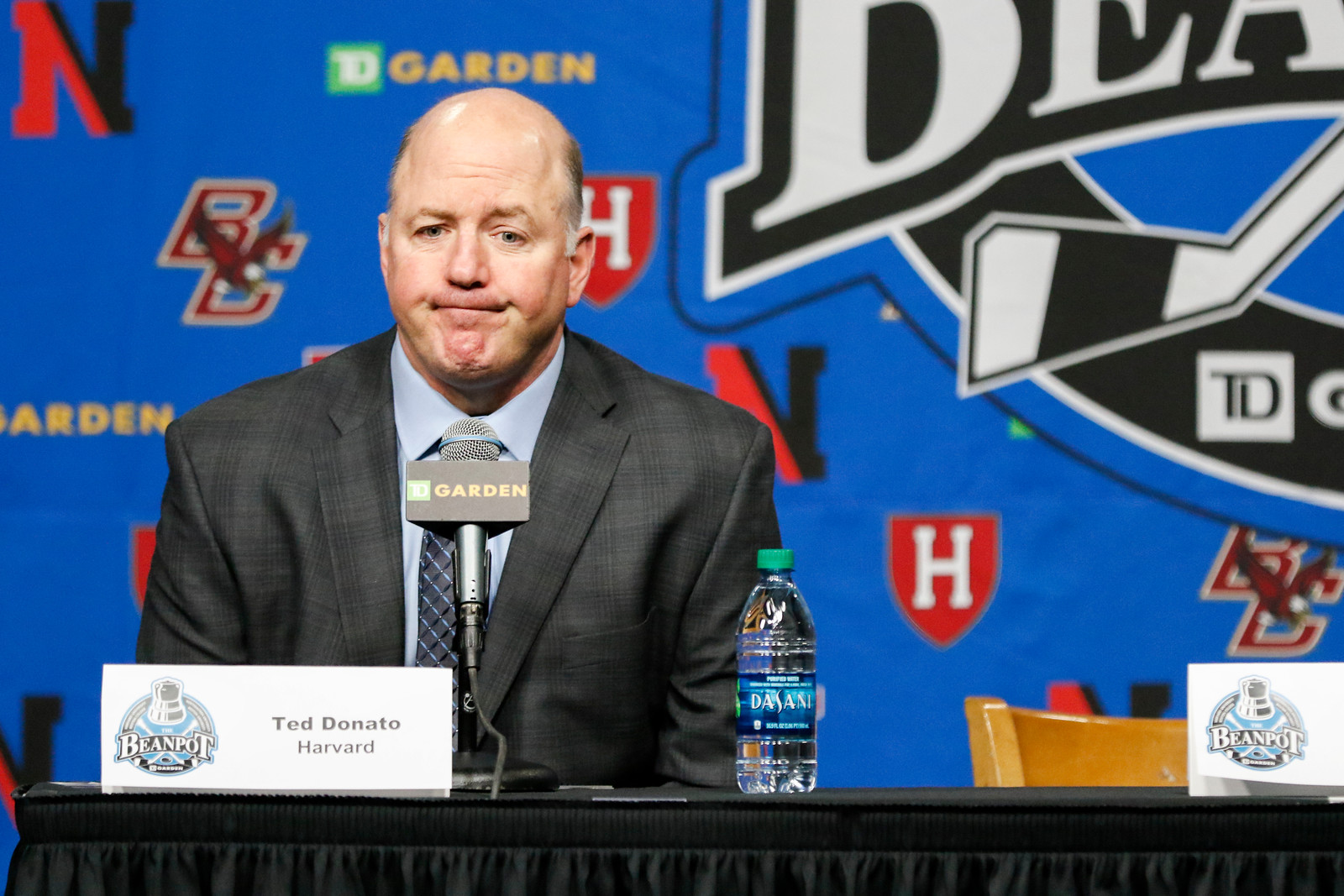 Early February rolled around, and that means one thing: the Beanpot. In a rematch of last year's tournament finale—one that saw the Crimson take home its first title since 1993—Boston University got the best of Harvard in double overtime after a seemingly innocuous wrist shot squeaked by Madsen's pads. The bad goal on such a big stage certainly fanned the fire of the Lackey-Madsen drama. 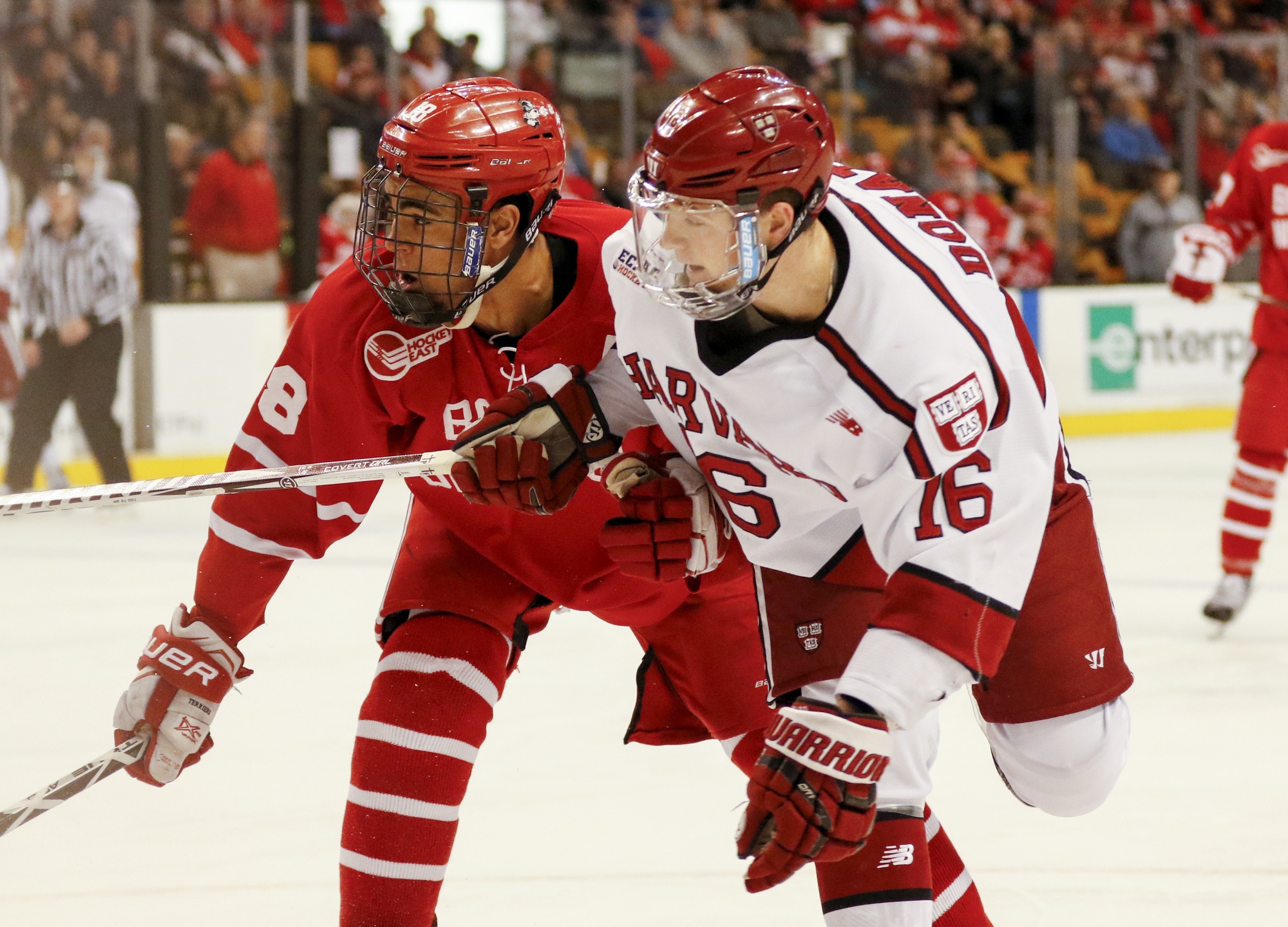 In the midst of a slump (1-4-0 in last five), the Crimson lost its offensive centerpiece, junior Ryan Donato, to Olympic competition in Pyeongchang. While sporting the red, white, and blue, the Boston Bruins prospect joined forces with Beanpot foe Jordan Greenway (on left). 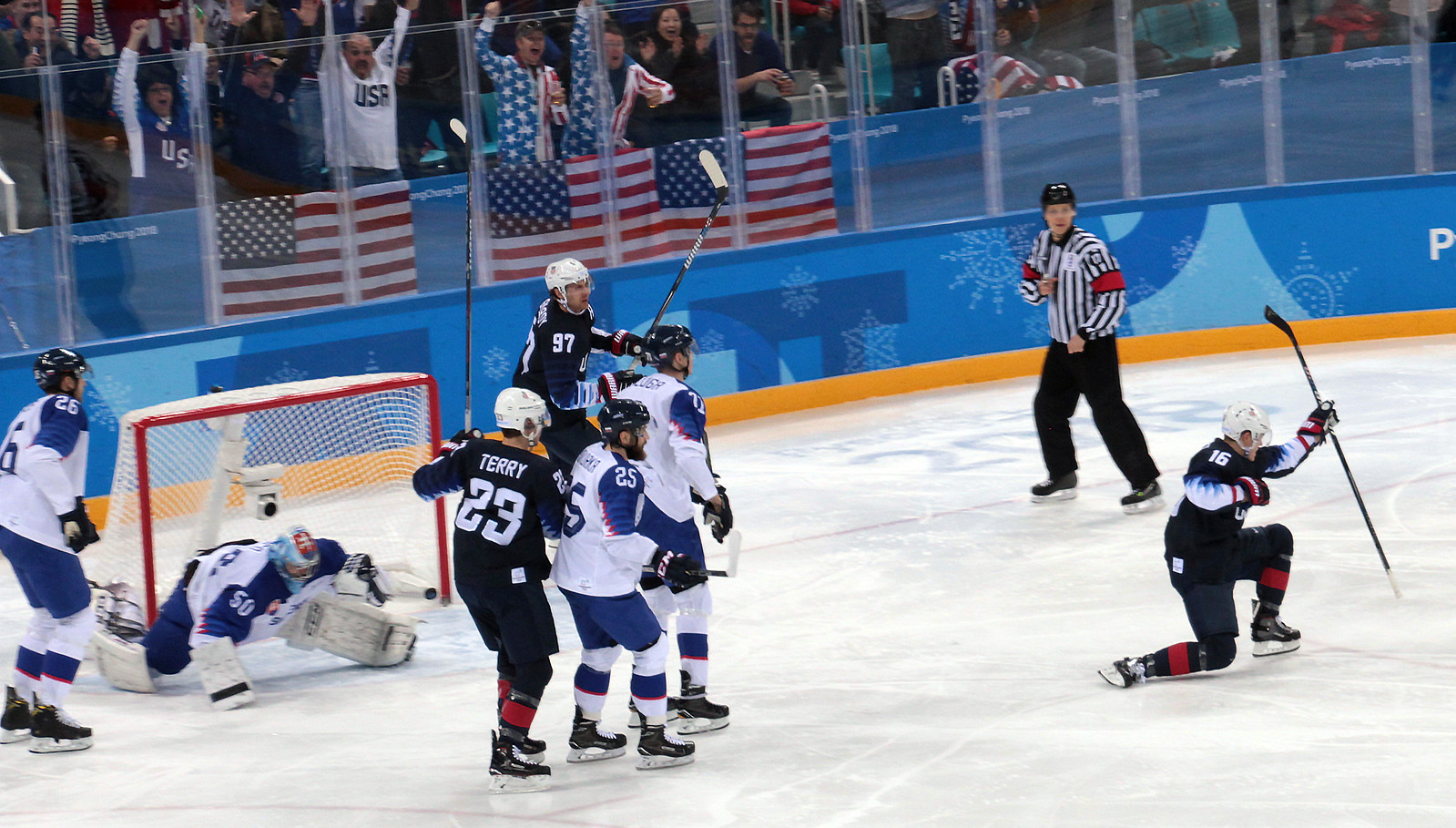 Donato made the most of his opportunity for the stars and stripes. His performance (5 GP, 5–1—6) put him atop the Americans in scoring and tied for first tournament-wide in goals. 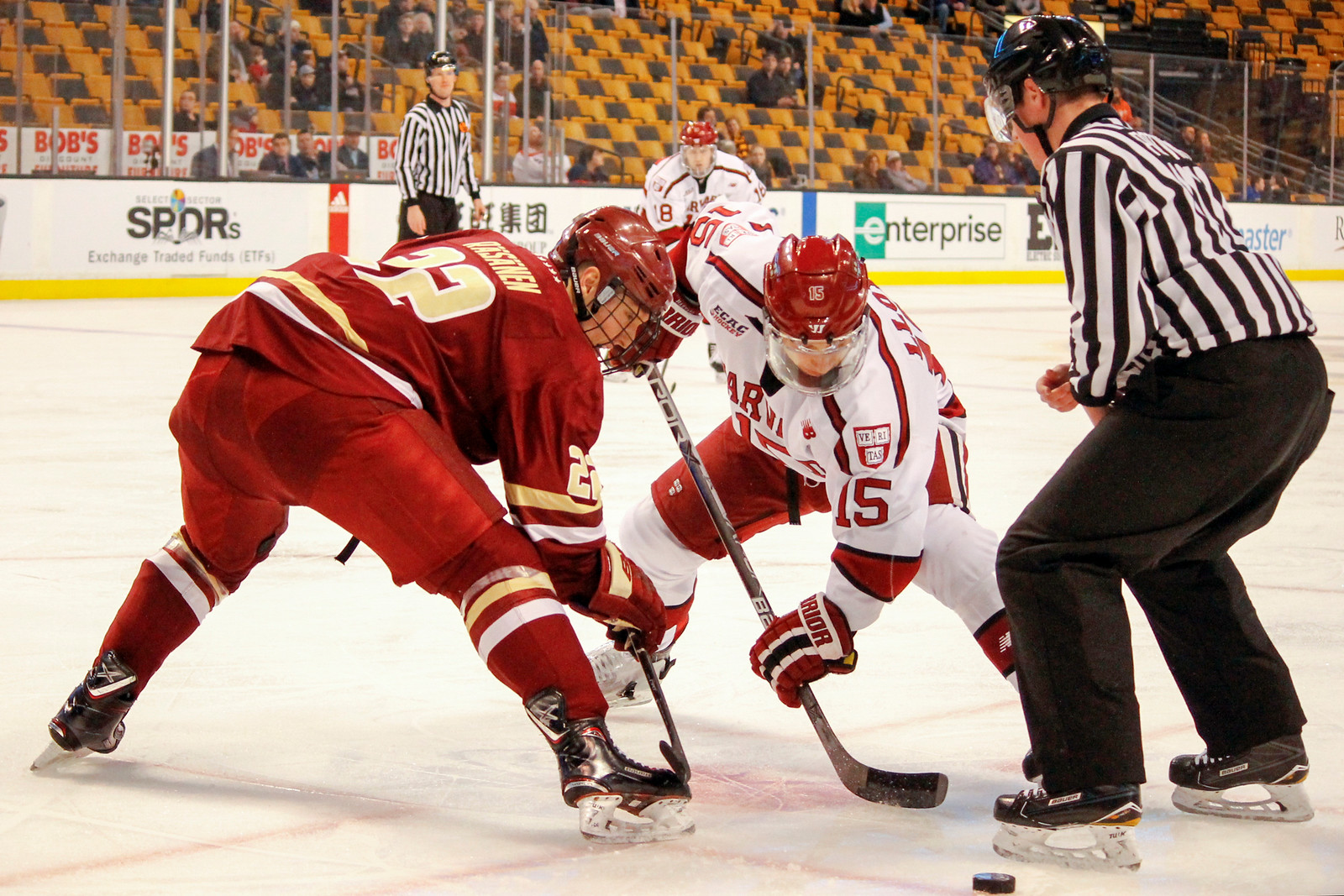 It's never a game teams want to play. Nevertheless, Harvard skated in it this year. The squad faced off against Boston College in the Beanpot consolation game in a mostly empty and lifeless TD Garden. At least the Crimson walked away with the two points after a 5-4 overtime win. 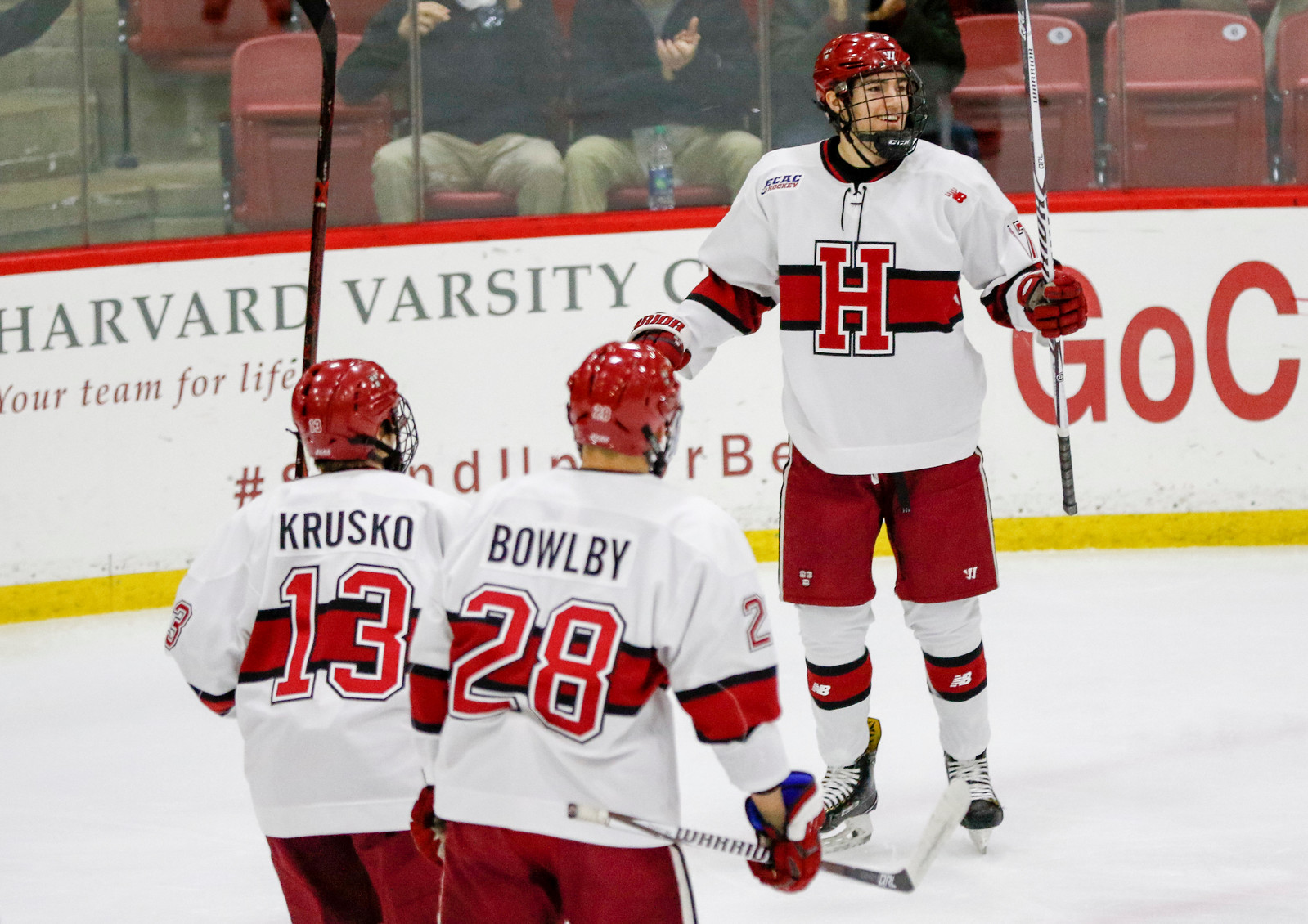 In mid-February, Harvard returned home for its final regular season weekend at the Bright. The "North Country" teams were in town, and the Crimson earned decisive wins over both opponents. Skaters like sophomore Ty Pelton-Byce (pictured here) played an instrumental role in filling the void left by Ryan Donato. 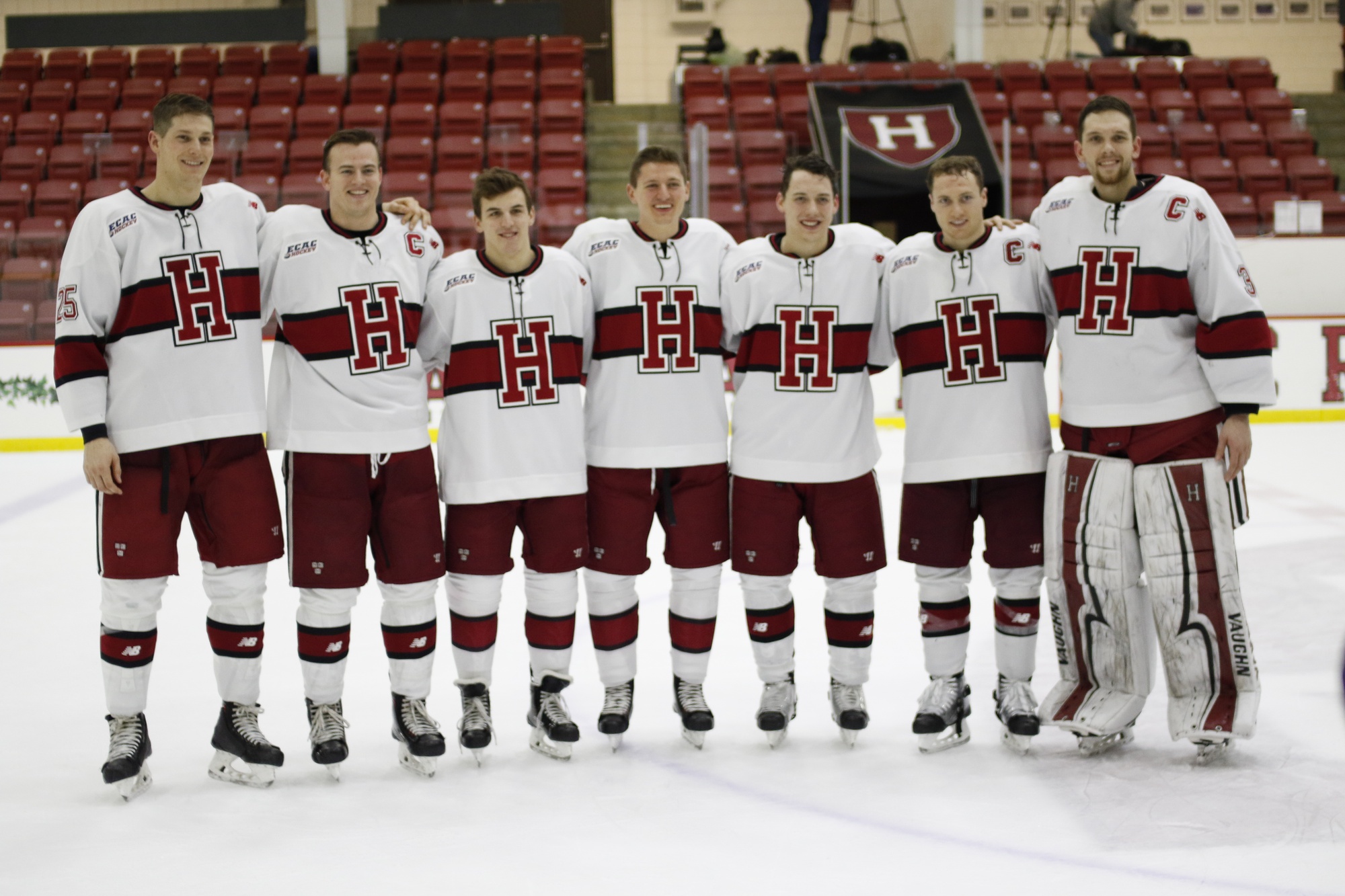 That Saturday, the program honored its seven seniors, including the team's first-ever trio of captains, after a compelling thrashing of then-No. 7 Clarkson. The class of 2018 has amassed 81 wins to this point and has a chance to become the winningest class in the last two decades at Harvard. 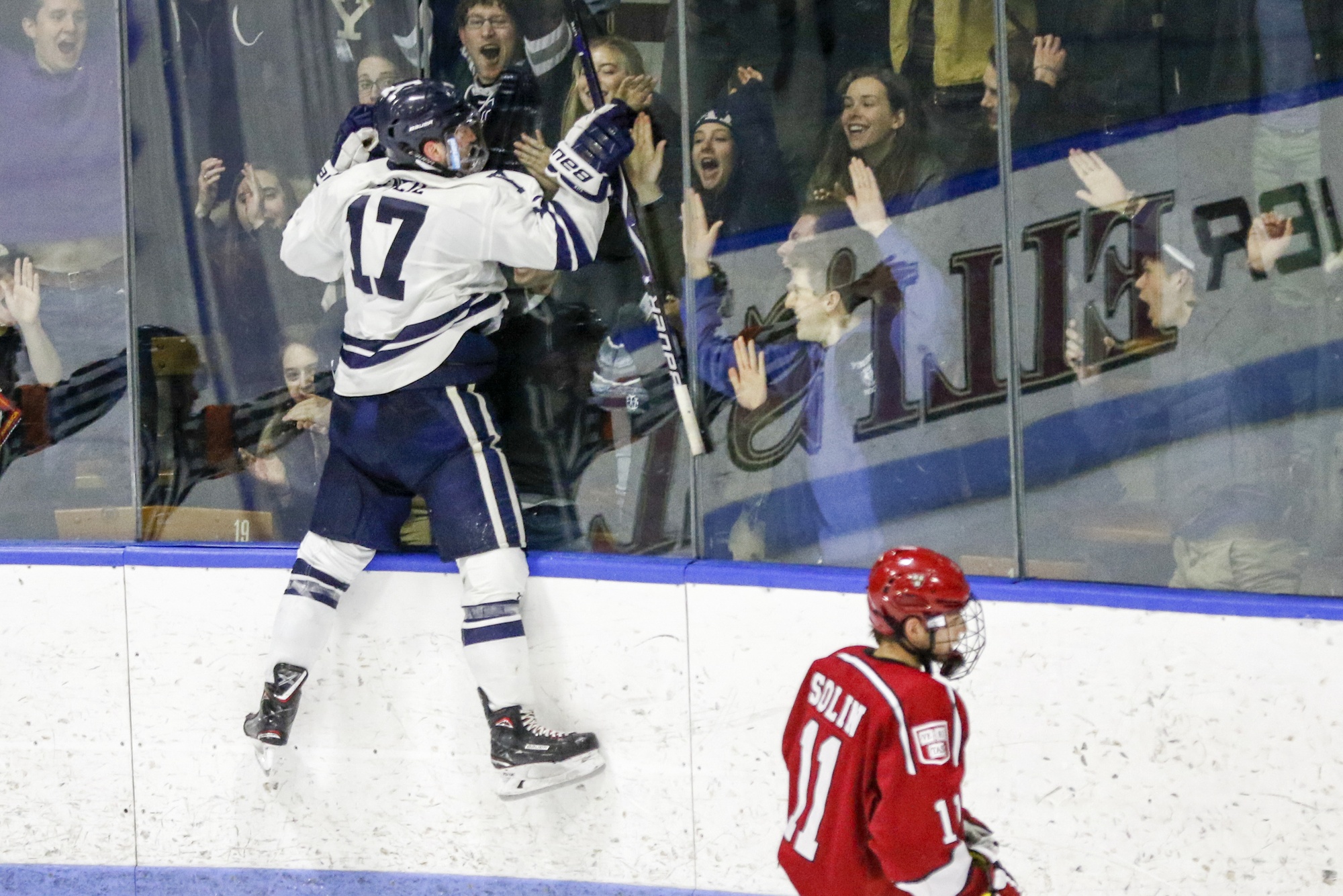 The Clarkson victory proved to be Harvard's last of the regular season. The squad regained Donato's talents and, confusingly, still managed to fall to Brown and Yale. A first-round bye in the ECAC playoffs was locked in by that point, so the games did not carry any postseason implications for the Crimson. Nonetheless, freshman Kevin O'Neil's late-game winner (aftermath pictured here) stung for a Harvard team that suffered its first sweep at the hands of the Elis since the 2014-2015 season.

And that brings us to today. Coach Donato's group waits patiently for an opponent in next weekend's ECAC quarterfinal round. If the Crimson wants a shot at the NCAA Tournament this year, it will likely need to run the table in the conference tournament.