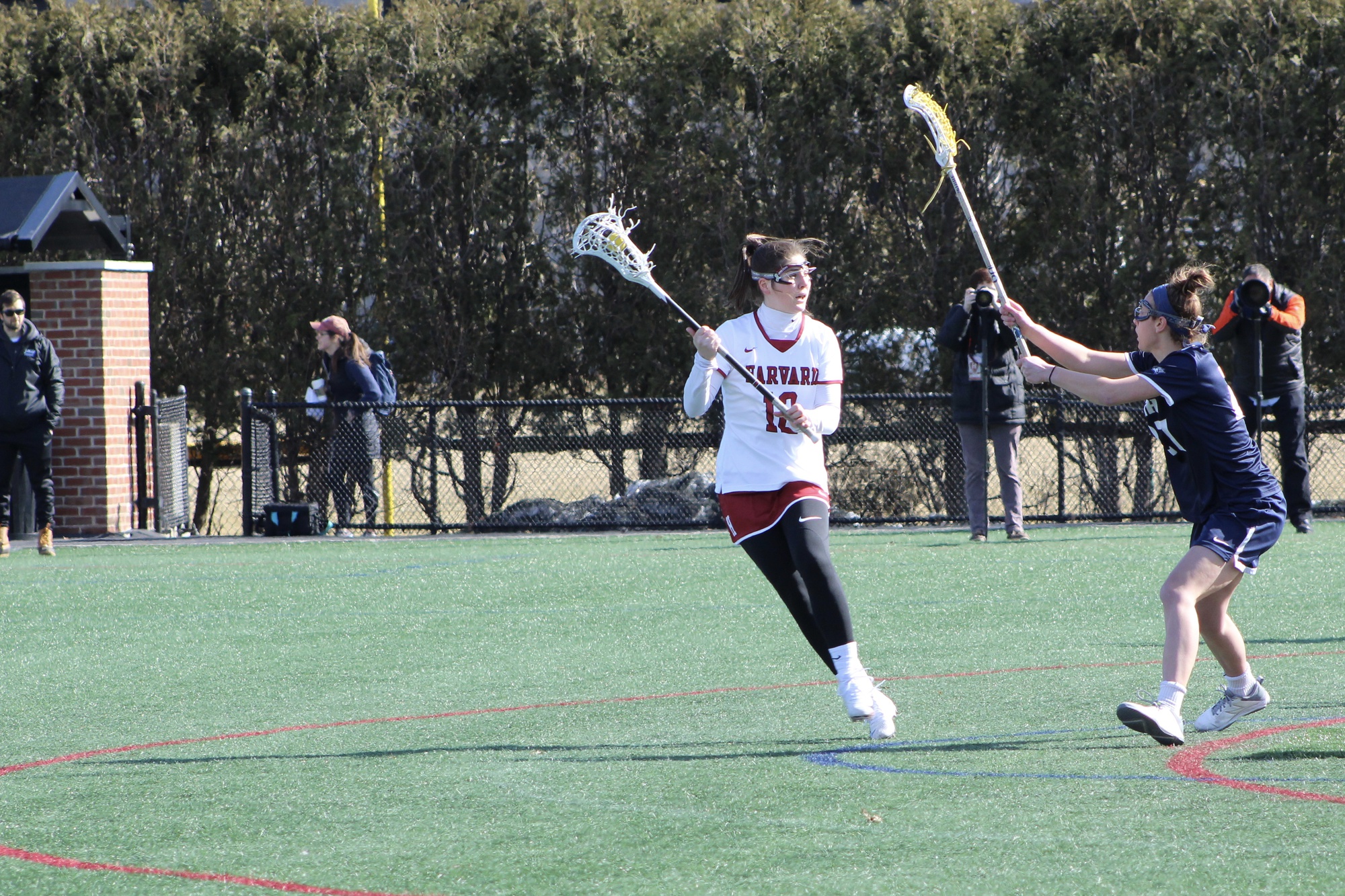 It took the two teams more than the allotted 60 minutes on Saturday to decide the winner. As the Harvard women’s lacrosse team took on perennial opponent Yale in enemy territory.

Crimson junior midfielder Keeley MacAfee’s goal with 2:55 left in the second half tied the game to force overtime and marked MacAfee’s second straight six-goal performance. One minute and 24 seconds into the extra period, a Yale overtime goal iced the game, 16-15, in favor of the Bulldogs.

Things were even throughout the afternoon grudge match at Reese Stadium with both teams equaling each other in nearly every category.

“It was a good hard-fought game,” coach Lisa Miller said. “Both teams played well, neither team gave up anything. It was a competitive Ivy league game that came down to situational play and we made some nice plays down the stretch to tie it up.”

Harvard (2-2, 0-1 Ivy) matched its opponent in clears, turnovers, and draw controls en route to a back-and-forth match that went down to the wire. The game saw its largest differences in ground balls as well as shots as Yale (4-0, 1-0) outshot the Crimson 43-32 in the game.

The shot count, according to the coach, does mirror the story of the game.

“They put 27 shots on frame,” Miller said. “We were pretty similar. We’re an efficiency offense. We don’t take a lot of outside shots. We take quality shots and put them on frame.”

Fouls by Harvard contributed to several shots for the opposition.

“They were on the line maybe 12 times,” Miller said. “That’s going to increase their shot output, and a lot of that is off-ball fouls.”

The pendulum swung the Bulldog’s way initially going up 2-0 in the first with goals by senior midfielder Emily Granger and freshman attacker Kayla Duperrouzel. The Crimson rallied back with five unanswered goals including McAfee’s first.

Harvard had a chance to put the game away at that point, but Yale rallied back and eventually pushed the score to 7-7, tying at the half. A combination of some inexperience and poor clearances on the defensive end led to a 5-2 run by the Bulldogs.

“We’re pretty inexperienced on the [defensive] end,” Miller said. “Until we get a little bit more experience. We’re going hard we just need more experience to some of those [critical] decisions in game. The experience will come with time.”

That is when The Crimson stepped up with two timely scores. Junior midfielder Caroline Garrity scored her single unassisted goal with 4:18 to play to bring Harvard within one. Soon after, MacAfee added her sixth goal, unassisted with 2:55 to play in the game. The scoring outburst was said to be a product of good team play.

“They have good team chemistry,” Miller said. “They have good game understanding and good timing; they’re shooting the ball really well. We’re pretty confident on the [offensive] end of the ball.

A goal by senior Bulldog attacker Kiwi Comizio with 4:36 to go in the overtime period was the deciding factor in the matchup.

The Bulldogs remained undefeated with the first game of Ivy League play while the Crimson fell to .500 on the season. Coming into a game against an undefeated team and a known rival did not change anything for the team.

“Coaches go one game at a time” Miller said. “The next game is always the most important game. You do not want to live your life thinking this game is bigger than any other game.”

A loss this past weekend showed areas for improvement for the future, including experience and clearances on the defensive end.

Despite the loss, there are still many good things to look for going forward.

“I was happy,” said Miller. “There were so many good things that you cannot be unhappy. All the [negatives] are fixable. It’s so early in the season.”