With a 2-1 victory over St. Lawrence in Sunday’s matinee, Dartmouth advanced to the quarterfinals of the ECAC Championship where it will clash with the Crimson in a best-of-three series for a spot in Lake Placid's semifinals.
By Spencer R. Morris 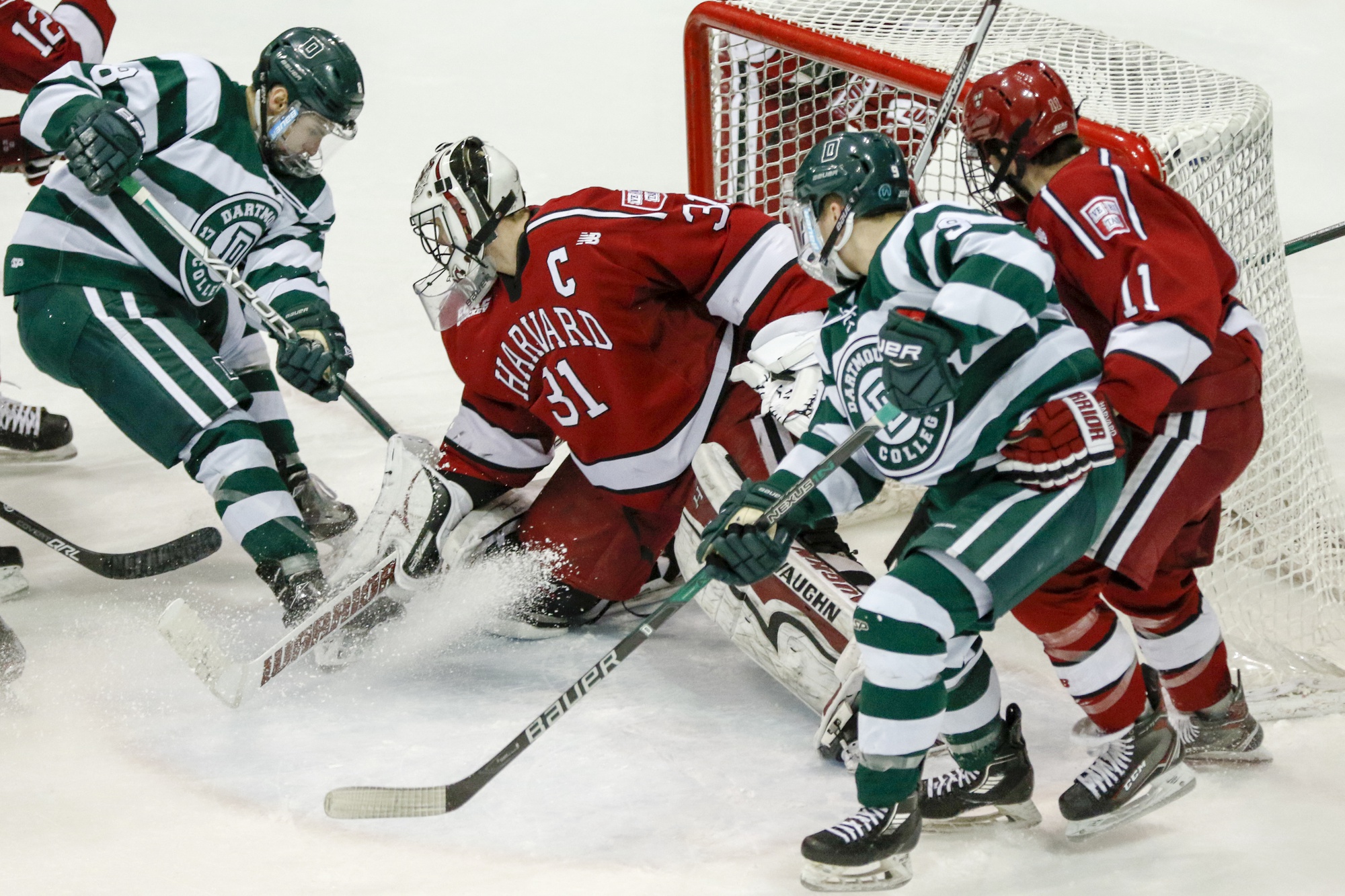 In two starts versus Dartmouth this season, tri-captain goaltender Merrick Madsen has sent away all but one shot sent his way (.976 SV%). While it is likely that the senior will get the starting nod from coach Ted Donato '91, it isn't a guarantee, as junior backup Michael Lackey has been competing for the blue paint. By Timothy R. O'Meara

After a week of waiting patiently, the Harvard men’s hockey team finally knows which foe will come to Cambridge this weekend hoping to spoil its chances of reaching Lake Placid for the fourth straight year.

With a 2-1 victory over St. Lawrence in Sunday’s matinee, Dartmouth (15-15-2, 11-10-1 ECAC) advanced to the quarterfinals of the ECAC Championship where it will clash with the Crimson (13-12-4, 11-8-3) in a best-of-three series. The winner earns a spot in the semifinals hosted at Herb Brooks Arena, the site of the 1980 “Miracle On Ice” game between team USA and the Soviet Union.

“[Reaching Lake Placid again] is really hard to do,” Harvard coach Ted Donato ’91 said. “We’ve been fortunate to be there the last three years, but I don’t think we take it for granted. It’s such a great venue, and it’s a carrot for us right now. We want to have a chance to defend our ECAC championship, and it starts on Friday against a real good Dartmouth team.”

The Crimson, the four-seed in the conference tournament, returns to action after enjoying a bye this past weekend. Harvard had already clinched a position in the ECAC’s top four—and thus a week off—before it battled Brown and Yale in late February. Nevertheless, a disappointing pair of results against the Ivy League rivals, who were both eliminated from playoff competition in the first round, has made Harvard eager to return to competitive action.

“Every game, you take away the negatives and positives,” said Crimson junior forward Lewis Zerter-Gossage. “That weekend didn’t go quite as we wanted, but having [the bye] week definitely gives us more time to mentally get back into it. Any playoff series, it’s a whole different beast…. People should be fresh and rebooted for this weekend.”

Zerter-Gossage, who sat out against Yale for precautionary measures, has availed himself of the extra time the bye week has provided and will return to the lineup this weekend. For the winger and others, the off-week is a welcome break.

“Towards the end of the season, you play more games and guys get a little bit worn down,” Harvard tri-captain Eddie Ellis said. “It’s great to use the extra week to get guys healthy, and at the same time…any extra week that we have to get better ourselves and not worry about preparing for an opponent is huge.”

The Big Green enters the series, spanning Friday through Sunday if needed, on a relative high note. Following a loss to the Crimson on Feb. 2, the squad picked up late-season victories against Yale and then-No. 7 Clarkson and has seen a surge in its scoring, averaging roughly half a goal per game in excess of its pre-February average.

Two sophomore forwards, in particular, have led the way for Dartmouth offensively. Will Graber and Shane Sellar, imposing their size at 6’5” and 6’3”, respectively, pace their team in scoring thanks to elevated play since Harvard completed the regular season sweep last month. Graber (32 GP, 9–16—25) has logged 13 points in nine games since that turning point, and Sellar (31 GP, 11–11—22) has registered 12.

“Graber, Sellar, and [freshman Quin] Foreman are three big guys who have been filling the net a little bit for them,” said coach Donato, providing his pre-scout of the weekend’s opposition. “We know those guys pretty well, but we haven’t seen all three of them together. They’ve got good size, they’re hard to contain down low…. It provides a good challenge.”

In spite of the Big Green’s recent offensive uptick, the Crimson has allowed just one goal to Dartmouth this season. Both victories over the Hanover-dwellers (5-0, 4-1) were decisive. In this way, the quarterfinal matchup favors Harvard, who has nabbed the teams’ last three tilts and lost just one out of the last nine (7-1-1), dating back to 2014. 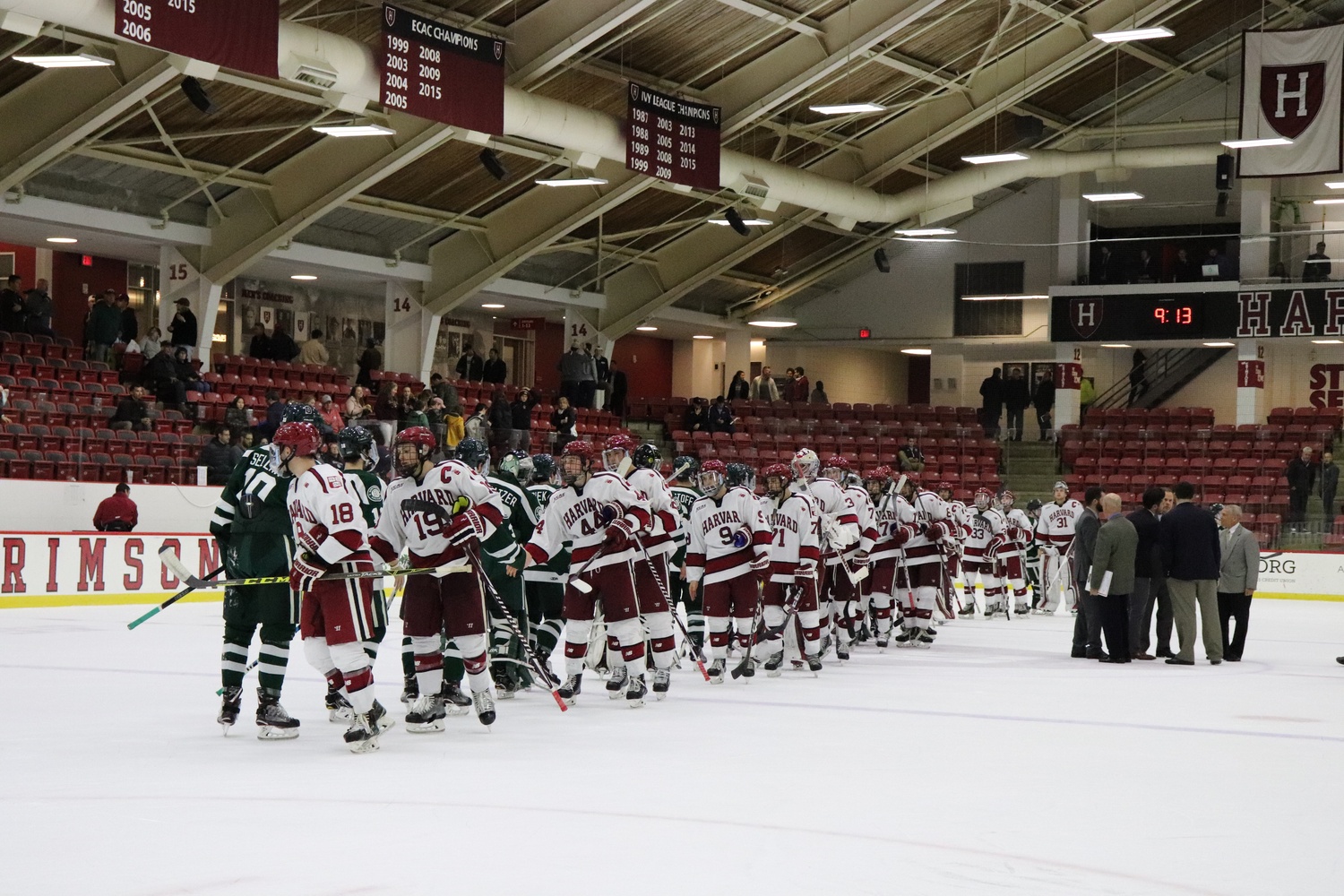 The Crimson claimed both meetings in the 2017-2018 regular season, outscoring the Big Green 9-1. By Lu Shao

On the flipside, for a team that entered the ECAC Championship with a lackluster 13-14-2 record, the Big Green boasts a more impressive slate of wins than the Crimson. Most notably, Dartmouth took down then-No. 2 Denver in mid-December and returned from the holiday hiatus with a victory over then-No. 16 New Hampshire. The squad followed up these performances by tying then-No. 17 Minnesota-Duluth.

In its conference schedule, the Big Green swept Clarkson—ranked No. 2 and No. 7 at the time of the bouts—as well as Yale, a team that stole both games from the Crimson in the regular season for the first time since 2014-2015. The green and white also skated past Colgate, a squad that Harvard failed to beat this year.

The Crimson, on the other hand, owns a 2-4-2 record against ranked teams and can hang its hat only on victories over then-No. 7 Clarkson and then-No. 19 Boston College in the Beanpot consolation game.

“Last year, we played [Dartmouth] maybe thinking that it would be an easier game than it was,” said Zerter-Gossage, alluding to last January’s 8-4 loss to the Big Green. “Maybe teams like Denver, Duluth, and Clarkson had that same mindset…. They could definitely take wins out of everyone no matter how well their season is going.”

As is often the case in playoff hockey, special teams may be the deciding factor in the series. For Harvard, the ups and downs of its power play have closely tracked its wins and losses. The team has suffered two rough patches this season—one at the outset of its nine-game road stretch in November, and the other from late January through the Beanpot.

Incidentally, both stretches of sub-par outings have begun with Cornell and Colgate, and both have included dry spells on the man advantage. In the earlier skid that bounced the Crimson from the USCHO top-20 rankings, coach Donato’s group went just 1-for-15 (.067) on the power play. In the more recent slide, the team failed to score on 16 attempts.

Of late, Harvard has rebounded from the man-up drought. Since snapping the scoreless streak in mid-February, the Crimson owns the NCAA’s third-best power play conversion rate (.400).

This smoldering man-advantage unit will battle a 23rd-ranked Dartmouth penalty kill (.822 on the year) that has mostly held Harvard’s power play in check this season (.833 against the Crimson).

“The first thing that jumps off the page is that they don’t take a lot of penalties, which usually helps you have a better killing percentage because you can be a little bit more intense and aggressive if you’re taking two as opposed to six,” coach Donato noted. “Those numbers are important, but what’s really important is in one game. You can be 0-for-4, but if you need a goal in the third period and your power play delivers, that’s the game.”

The clash between Harvard’s extra-man group and the Big Green’s penalty kill unit is more or less a toss-up. This is only one aspect of the special teams duel, though. The Crimson will also be tasked with shutting down the Dartmouth power play. 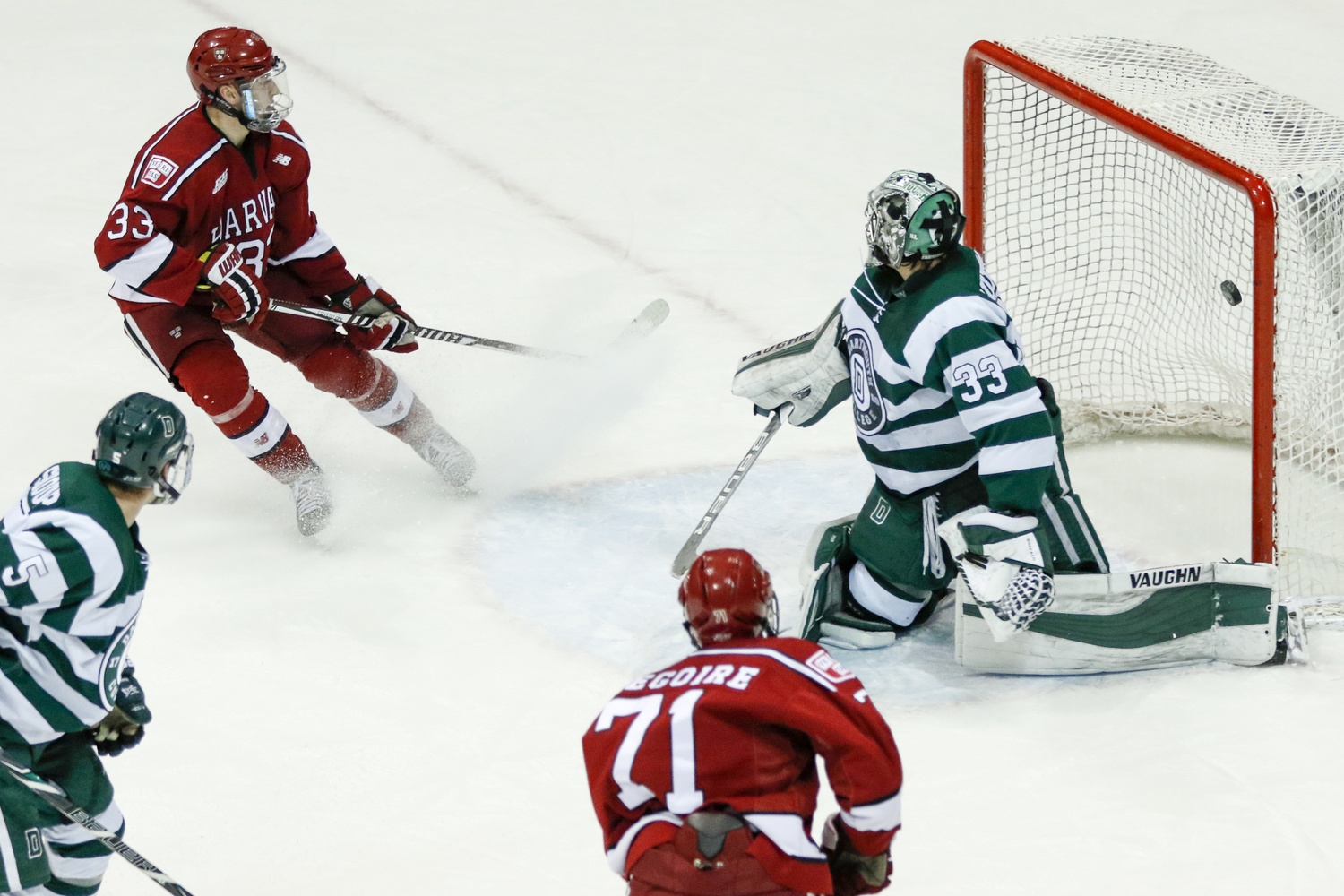 Freshman Jack Badini's line did some damage in senior net-minder Devin Buffalo this season. He and his wingers will look to inflict some more this weekend. By Timothy R. O'Meara

Luckily for this weekend’s home team, denying the Big Green’s man advantage will be easier than solving its kill. Dartmouth has cashed in on just 12.6 percent of its power play opportunities, good for fourth-worst in the nation.

Meanwhile, Harvard has weathered 80.6 percent of the opposition’s extra-man chances and killed off all seven of the Big Green’s power plays during the regular season. It is worth noting, however, that the Crimson has posted a dreadful .741 penalty kill percentage in the last month, good for bottom 10 in college hockey.

“It’s a fresh new slate for everybody,” said coach Donato, suggesting that the playoffs provide a chance for both teams to reinvent their special teams. “You got to do the fundamentals that allow you to have a successful penalty kill: make sure you have good clears, come up with a big save make it tough to enter, win 1-on-1 battles.”

A key component of any team’s penalty kill is the player between the pipes. Looking toward the blue paint, the goaltender showdown will be another defining facet of this weekend’s quarterfinal matchup.

Dartmouth’s masked man, senior Devin Buffalo (14-9-1, 2.69 GAA, .910 SV%), has had an up-and-down season much like the team in front of him. The Alberta native, though, has been crucial for his squad of late—sometimes, it’s Buffalo who steals the show; other times, the net-minder receives enough run support to hang onto victory.

Whatever the reason, Buffalo is responsible for all but one of the Big Green’s wins this year, and he is entering the Harvard series fresh off a sturdy weekend against the Saints (2-1-0, 1.69 GAA, .932 SV%).

For the Crimson, the story in net this season has been a bit more complicated. Tri-captain Merrick Madsen (8-8-3, 2.18 GAA, 9.23 SV%) lost the label of definitive starter after posting a 2-5-1 record through the first two months of the campaign. In the spirit of meritocracy, coach Donato awarded backup Michael Lackey (4-4-1, 2.72 GAA, .899 SV%) three starts in December—the first time Madsen watched games from the bench since his sophomore season.

While both tenders finished the regular season at .500, Madsen’s numbers speak for themselves. The senior ranks 17th nationwide in goals against average and 12th in save percentage.

It may sound puzzling that a sub-.900 goaltender would be stealing starts from Madsen, given his impressive statistics. But consistency has been a major issue not only for Madsen but for the team in general, and coach Donato has used a few goalie changes to rally his group. 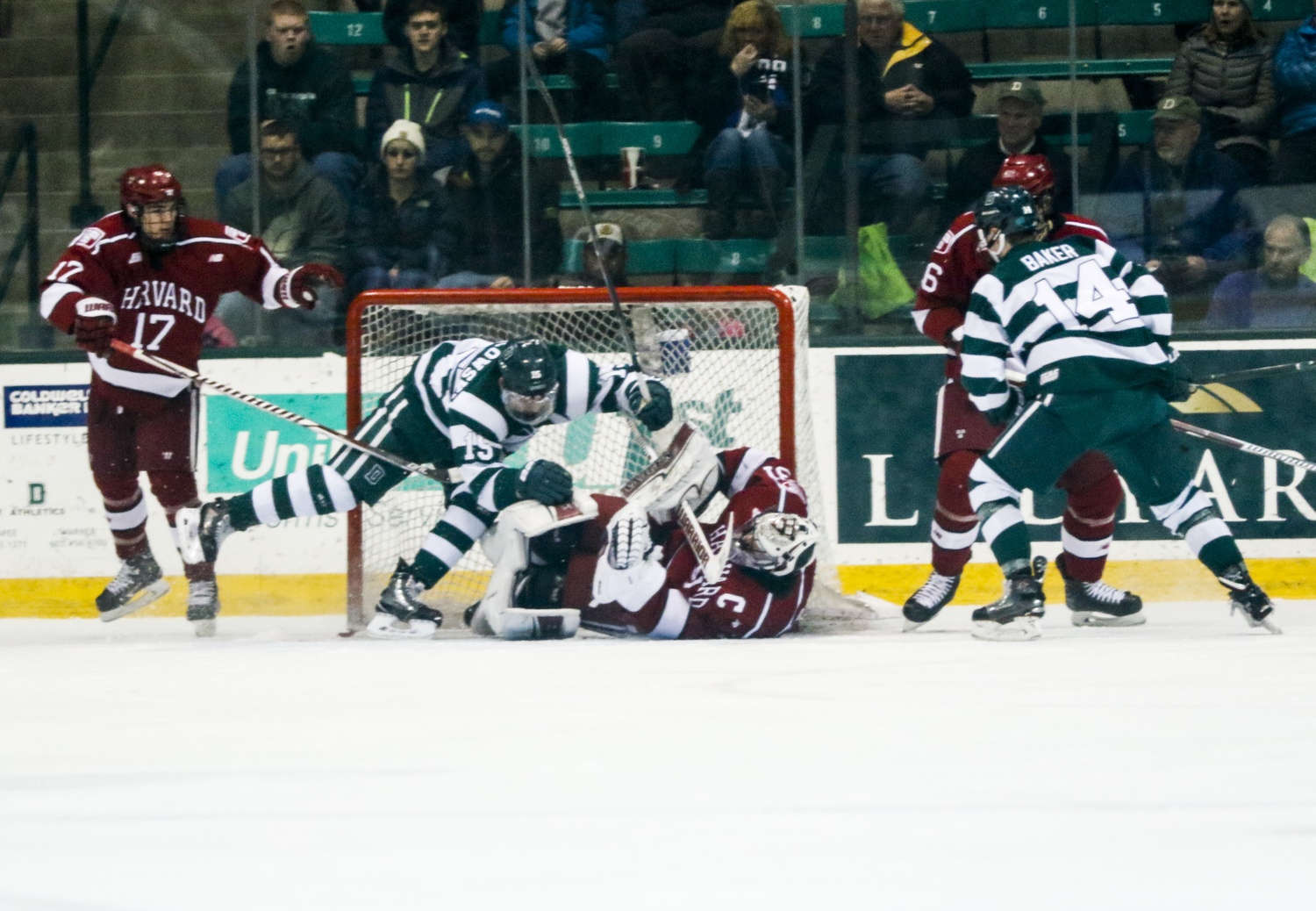 The Big Green's premier forwards, sophomores Will Graber and Shane Sellar and freshman Quin Foreman, will use their size to make life hectic for whomever tends the cage for the Crimson this weekend. By Timothy R. O'Meara

The assumption is that the seasoned veteran and captain will get the nod in the playoffs. There truly is no way of guaranteeing a Madsen start, however, especially since it has been a month (3-3-0) since Harvard started the same net-minder in consecutive contests.

“That decision becomes magnified this time of year, but I don’t think the dynamics really change,” coach Donato said. “We want a chance to win every night…. The leash is pretty short. We have a series to start, but after that, you don’t get a game two.”

The bench boss was reluctant to favor one backstop over the other as of early this week.

A postseason start in game one on Friday will be either Lackey’s first or Madsen’s 13th. Regardless, the Crimson will enjoy a collective first when Dartmouth comes to Cambridge.

Harvard has faced the Big Green six times in the ECAC Championship tournament—in four single-elimination games and, more recently, two series. The Crimson icemen, owners of a 6-4 record in these games, will host Dartmouth at the Bright-Landry Hockey Center for the first time in ECAC post-season history.

Which squad will emerge victorious from the quarterfinal showdown? Harvard will look to continue this year’s success against the Big Green and make some noise in the conference tournament. Dartmouth seeks a spot in Lake Placid and a chance to play spoiler for the conference’s elite teams—a skill the group has already displayed throughout the season.

The series will ultimately come down to which versions of the Big Green and the Crimson show up this weekend.