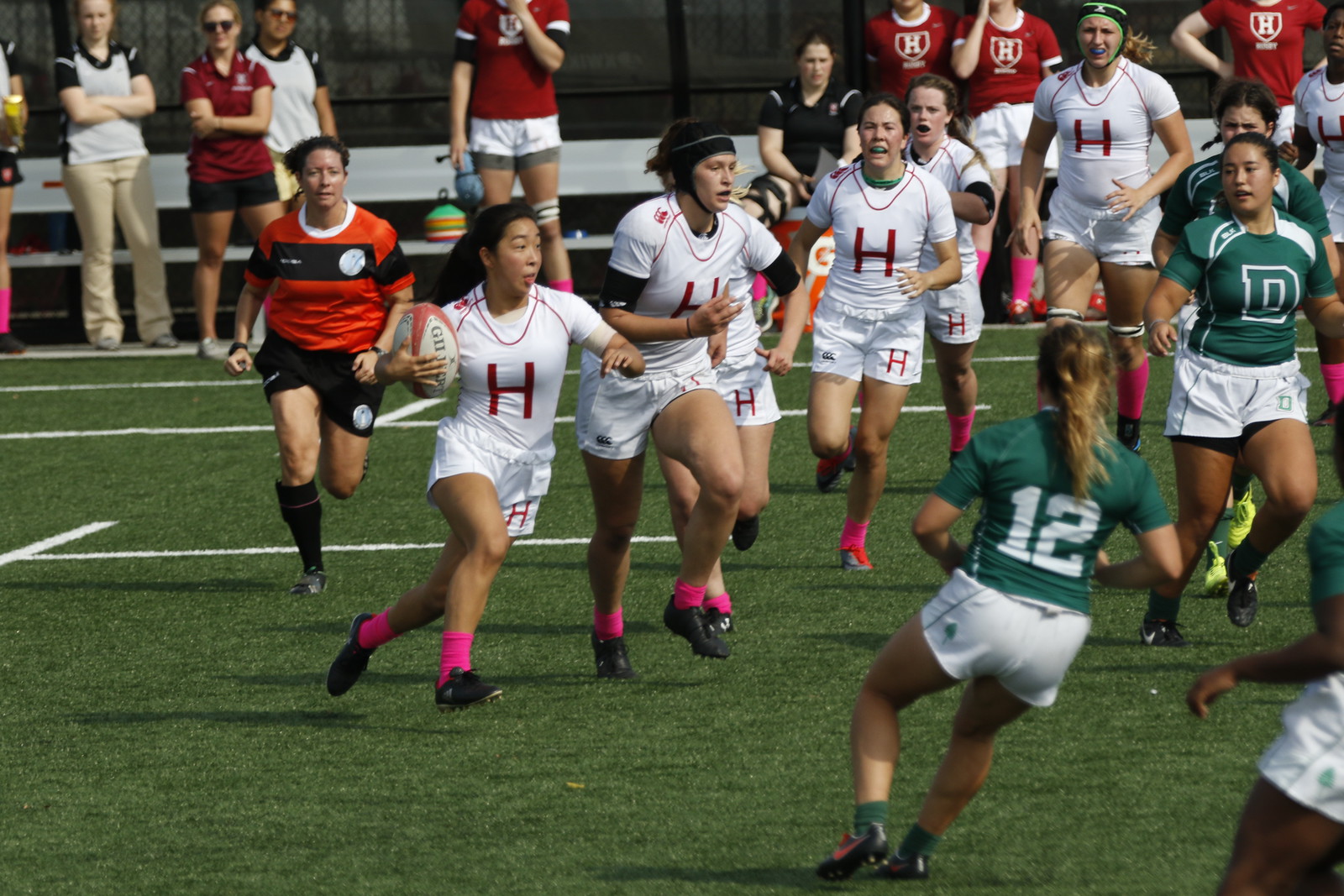 The rugby team pushes the ball upfield in a tilt against Dartmouth. By Timothy R. O'Meara
By Kim Arango and Amir Mamdani, Crimson Staff Writers

On Saturday, April 14, the Harvard Radcliffe women’s rugby team (12-3) took on Dartmouth in the Ivy League 7s finals, in pursuit of its third consecutive crown. However, the two-time defending champion was ultimately bested by the women from New Hampshire in a 29-0 scoreline, relegating the Crimson to a second-place finish in the Ancient Eight championship.

Harvard had previously faced off against the Big Green last year, when the Crimson claimed a 10-5 victory over Dartmouth to secure a Ivy 7s Championships title after defeating Princeton in the semifinal, and besting Penn and Columbia in group play.

Despite suffering a loss to the Big Green during group play, Harvard came back to secure the championship victory, an effort the team hoped to repeat on Saturday. Despite falling behind in the first half against Dartmouth, the team hoped its experience and stamina would life it to a third consecutive championship.

“Though we don’t have as many competition days, the tournament style takes a different kind of focus and energy because we play many short games over 6-8 hour days,” sophomore Dominique Cantave said. “We’ve certainly been focusing on our play, shoring up our defense and attack. But, another component to our training has been making sure we can last through five games. We’ve done a lot of mobility and conditioning so our bodies can take the contact, and also mindfulness training to have intense focus throughout the day.”

Early on in the 2018 championship match, however, it was evident that the Crimson was facing an extremely difficult Big Green squad. Harvard proved unable to surmount Dartmouth’s early lead, and was shut out in the championship match. After falling behind 17-0 at halftime, Harvard proved unable to scratch the score sheet to conclude its Ivy 7s campaign.

This year, the Crimson opened group play by facing off against Columbia, Cornell, and Brown, the teams comprising Pool A. The team rolled past the competition both in group play, and the semifinal against Princeton. The women from Cambridge tallied an impressive total of 174 points, while holding their opposition to a mere 14 points.

In the opening match of the tournament against Cornell, freshman Arianna Romero and junior Rachel Harkavy both scored three tries apiece to lead the team in scoring. However, the tries were not limited to that pair alone, with sophomore Delia Hellander scoring in the opening minute. Harvard’s momentum only increased after a successful try from junior Genevieve Quirion. The defending champions coasted to a 64-0 opening victory, with further tries from sophomore Robyn Beese, freshman Sabrina Kim, and conversions from junior Susie Clements and Hellander. The Big Red appeared overmatched by the Crimson, who appeared set on a third consecutive championship run.

The winning momentum continued for the Crimson into its second match of the day, against the Lions of Columbia. The defending champions sealed a 40-5 victory, with Hellander tallying 16 points off of two tries and three conversions, supported by more scoring from Romero and Quirion. In the final group play match, against Brown, Harvard closed out the match in a 24-7 victory. The scoring was kicked off with Romero scoring the first try of the match, putting the freshman at the top of the team’s scoring. Not to be outdone, Romero’s fellow freshman Kim added tries as well, ending the match with 15 points to become the match’s top scorer.

“Going into the Dartmouth game, we were really trying to focus on running our pattern and staying calm and composed throughout the entire match,” Hellander said.

Despite a disappointing second-place end to the Ivy 7s championship, the Crimson’s season will continue into April, and potentially May, depending on the team’s performance.

Harvard will have a quick turnaround, as the squad will take on Army, Norwich, and Northeastern in the Bowdoin Polar 7s invitational. The Crimson will be looking for revenge, after dropping a 34-10 contest to the Black Knights earlier this season.