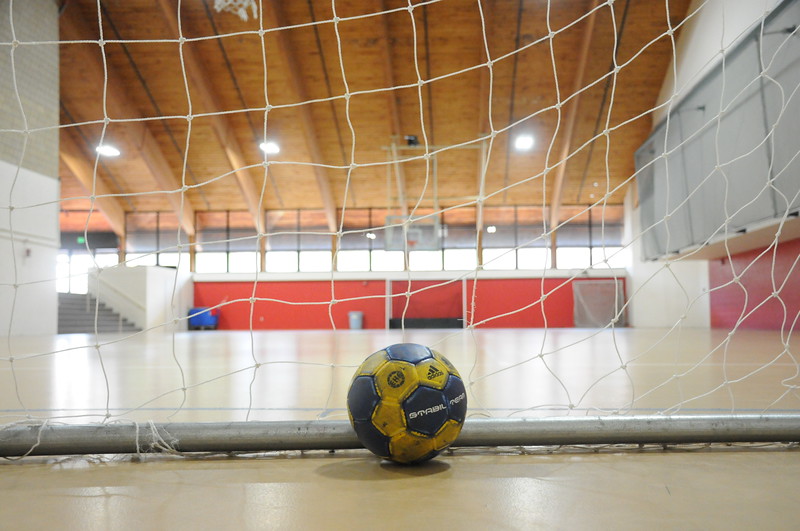 To accommodate the passion and fervor for soccer on campus, the Harvard Club Futsal team was created as an accessible outlet for students to play the game they love. By Henry Zhu
By Ronni Cuccia, Contributing Writer

Prior to 2014, the soccer scene at Harvard was composed entirely of varsity and club soccer. Seeing a demand for a more casual and inclusive way for students to play the game they love, Dawit Gebregziabher ’16 and Henry Scott ’18 founded the Harvard Futsal Club.

Starting off as small casual group of soccer enthusiasts, Harvard Club Futsal has expanded to an organization that today has more members than almost all other club sports on campus.

“I’m very proud to have witnessed the evolution of the club in the past four years and its growth from twelve members and one session per week to over 150 members and three sessions per week,” Gebregziabher said. “The club fills an existing need on the campus and it has been a great pleasure to be involved.”

Although futsal does not get as much publicity as soccer, its players insist it is just as enjoyable. Futsal is essentially an indoor version of soccer, usually played on a basketball court with small nets on either end. The rules are more loose than those in soccer. There is no referee, there are no offsides, there are no fouls, and no out of bounds. In fact, sending the ball off of the walls is all a part of the strategy of the game.

In soccer, the players who are most disciplined, in the best shape, and have the strongest boot have advantages over other players. In futsal a different strategy is required. The players that are the most creative, skilled, and even unconventional often excel in the indoor game.

At Harvard, earning a spot in the more “structured” version of club soccer can be extremely difficult. Tryouts for men’s club soccer happen every September around the first week of school. There is very little space on the roster for new players. Even with the low odds, 100 people try out and only around three to six new players are taken on the team each season.

“In order to be one of the few to ultimately earn an invite to regular practice, you have to stand out quickly among the rest of the players,” Scott said. “Usually one stands out through one's playing style and decision making, and most often those who manage to catch the eye happen to be players with experience playing the 11v11 soccer in organized and competitive conditions.”

Women’s club soccer tryouts can be equally as competitive. Usually around 30 to 50 women try out while only between four to twelve girls make the cut. The amount of people who show up every year to both the men and women’s teams demonstrate the massive interest in spaces on campus where people can play the game. Futsal seeks to create those spaces.

Because futsal is open to anyone and allows everyone to play, it creates a pick-up style, recreational environment compared to the organized practices and drills of club sports. The structure also means that the people who take time out of their week to go play club futsal also happen to be extremely passionate about the sport.

“As an international student who grew up playing the game, I understood the popularity of informal pickup games especially among other internationals.” said Gebregziabher in a written statement. “There were and still are other groups for organizing pickup but due to the weather they are often limited to playing from late spring to early fall. The club was thus setup to give students a way to play year-round, including the winter months.”

At a typical club futsal session, there are about 15 to 25 graduate and undergraduate students of both genders that show up to play. The attendees are randomly separated into different teams. Each team has a goalie and four field players. Club futsal plays five minute games or until one team scores in order to get more playing time for everyone.

“The game is fast-paced and everywhere: side walls are fair game, no refs, no fouls,” Scott said. “Here, creativity and unconventional maneuvering take precedence over physicality and any amount of years of academy-level training. Deficiencies in form—atypical ball-handling techniques, risky decision-making—here are met with admiration, or, if especially weird but successful, hysterical cheers. Because of this, futsal is more open to an array of playing styles.”

The organizational structure of Harvard Club Futsal naturally incentivizes meeting new people. The teams are mixed up every time they meet, so every time there are different people on different teams. Oftentimes no two people on a team are from the same country.

There is also some overlap between club soccer players and futsal players despite the difference in styles of play of the two games. Club futsal attracts people who grew up playing street, and other unconventional forms of soccer. Every time club futsal meets, there are both men and women present, people from various countries, and people who play soccer in different ways.

“Most people who show up are soccer fans and lots of people come in their team’s jersey,” said sophomore club soccer and futsal player Cameron Jones. “It creates an atmosphere that’s really vibrant because everyone’s talking about Ronaldo’s bicycle kick goal, or the latest round of Champions League games and arguing about players and teams.”

The club has expanded from meeting once a week on Saturdays to three sessions a week. There are members who have competed in professional futsal leagues in Europe and players who have never played on an organized team.

It is rare at Harvard to find a space or group that does not require a “comp” process or a tryout. Between the uniquely passionate and diverse students who are part of Harvard Club Futsal, all that is needed is a love for soccer.