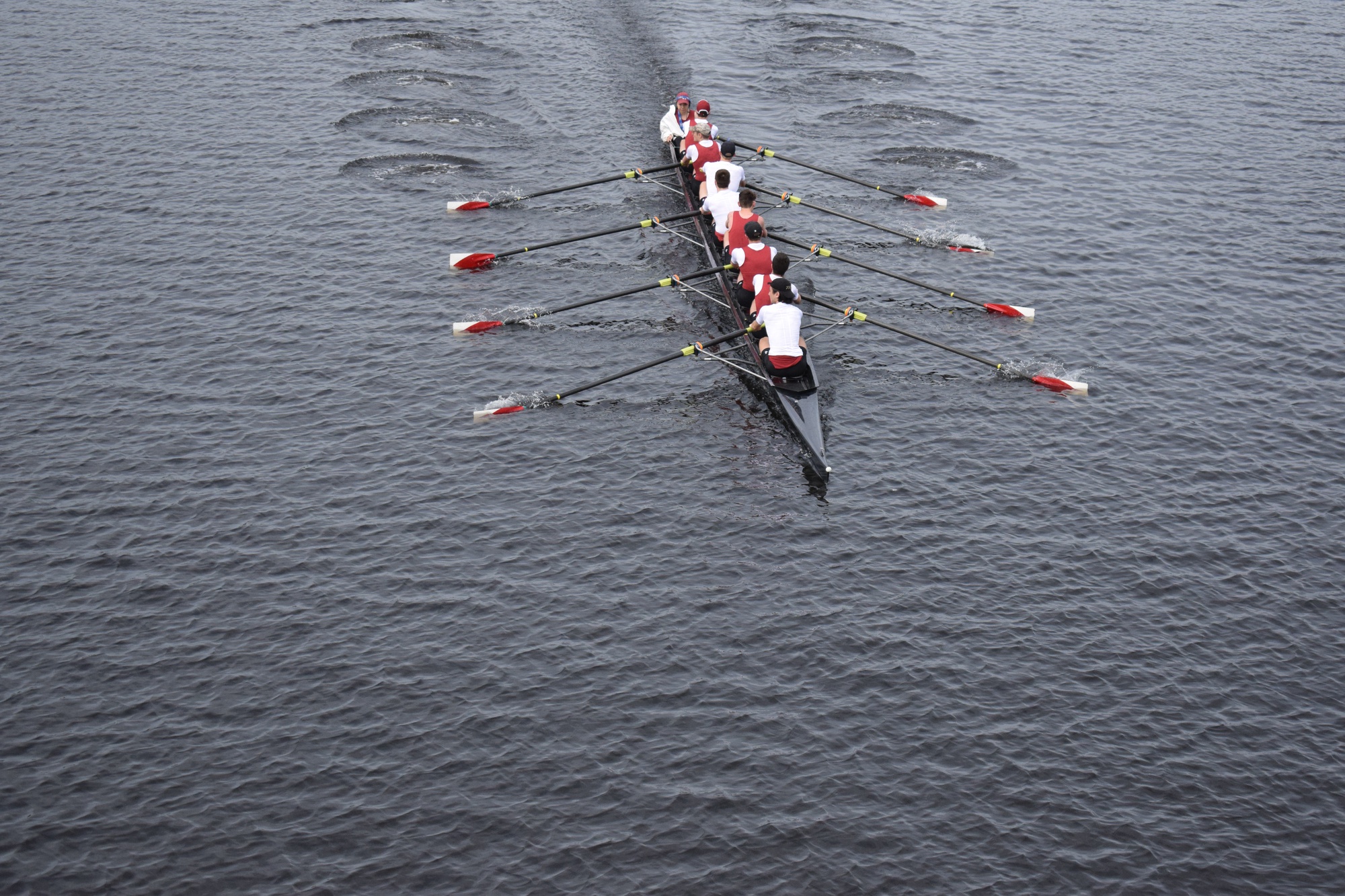 Harvard men's lightweight crew, which is undefeated so far this season, has also seen individual successes as freshman Drake Deuel broke the lightweight world record in the half-marathon for the erg.
By Leon K. Yang, Crimson Staff Writer

Harvard men's lightweight crew, which is undefeated so far this season, has also seen individual successes as freshman Drake Deuel broke the lightweight world record in the half-marathon for the erg. By Ellis J. Yeo

It was raining when freshman Drake Deuel arrived at the Harvard men's Newell Boathouse on the Charles. Unable to get on the water, the rookie hopped on an erg and casually broke the lightweight half-marathon world record erg time by nearly an entire minute.

“It was an incredibly rainy, miserable day outside and we weren’t able to row, so I was indoors on the erg and I just felt really good,” Deuel said. “I knew that that time was out there, and I thought I’d go for it.”

“It was a pretty measured effort,” Deuel said. “It’s an hour and 12 minutes long for my time, so you have to be consistent throughout and just hold on and try not to die and run out of energy, go too fast, that sort of thing. I have a lot of experience with these long, drawn-out pieces. It’s sort of what I’m best at. For our racing, it’s usually only 2,000 meters, so that would take six or seven minutes, so it’s a very different exercise.”

Setting records is nothing new for the Dallas, Texas, native, who earlier this year set the lightweight world record in the 10,000 kilometer distance on the erg. The record was recently edged out by Canadian Maxwell Lattimer in 33:27.8. Lattimer competed for Canada in the 2016 Rio Olympics.

“He got it by like 0.8 seconds, so I have to get that one back later this year,” Deuel said. “It’s just a good bit of rivalry and fun.”

Deuel had an illustrious career at Highland Park High School, where he was a member of Dallas United Crew. In his senior year, he came in second at the 2017 Youth Nationals in the men’s single.

For senior Andre Dupuis—Deuel’s captain—the freshman’s massive accomplishment is indicative of a commitment to progress and fitness.

“Honestly, I wasn’t really that surprised,” Dupuis said. “This guy puts in a lot of work. He has a tremendous work ethic, and so I think this was just a product of all the work he put in.”

Deuel also holds the American lightweight 2k record with a time of 6:05.1. The current world record is held by Denmark’s Henrik Stephansen, who completed the distance in 5:56.7 back in 2013. Deuel is looking to the C.R.A.S.H.-B. erging competition held in Boston to potentially beat that time.

“The most important record is the olympic distance 2,000 meters, which is the standard racing distance of rowing in general for the spring season,” Deuel said. “That’s definitely the most coveted time and of course the most difficult to achieve.”

However, despite all these individual accolades, Deuel still prioritizes the performance of the rowing program as a whole and the performance of his boat, which he describes as “what really matters.” Deuel races the first varsity eight, which last week dominated Dartmouth and MIT, beating the rest of the field by more than eight seconds. The performance pushed the lightweight team into the number one ranked spot in the nation.

“The individual is important and it shows what I can do, but not at all more than what our team can do and how that fitness can translate into the boat and onto the water to help the team to achieve those results against other schools,” Deuel said.

Dupuis said that he appreciates Deuel’s sentiment and focus on the team as a whole.

“I think it’s great,” Dupuis said. “I think the team effort is what is most important for the program, so it’s great to see someone who has the drive and the level of fitness that he has and is willing to contribute into the collective effort of the team.”

Moving forward, Deuel hopes to compete in the Olympics, held in 2020. He will spend the summer training and improving his sculling with two oars, something different from the one-oar rowing of collegiate competition.

“For the olympic boat, for lightweight, it’s a double, so two guys with two oars each,” Deuel said. “I’m looking to improve my speed and rowing on the water along with my fitness to try to make something happen for Tokyo.”

In only his first year of college, Deuel has certainly made something happen.