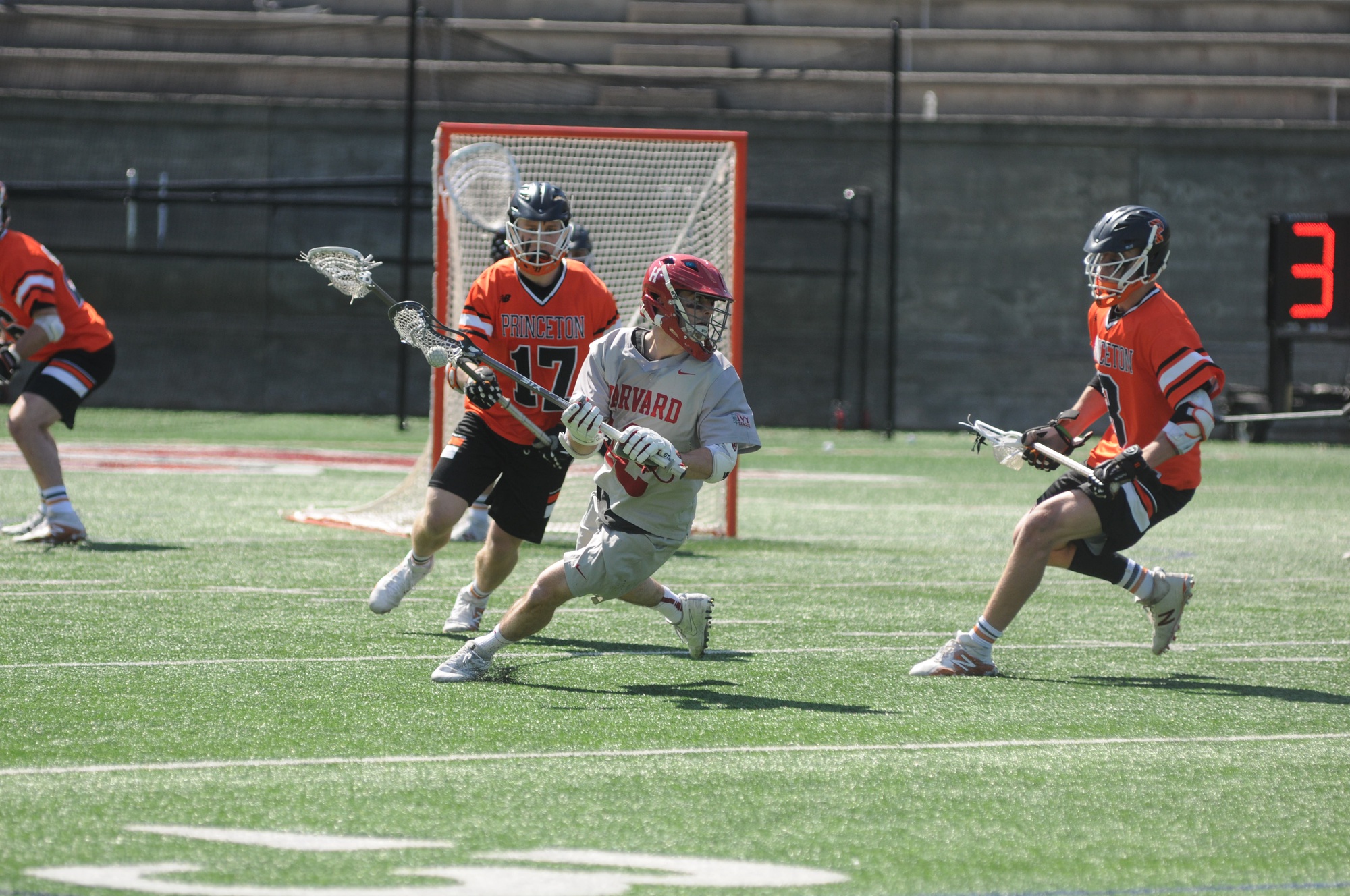 Men's lacrosse put up 57 shots against Princeton, but only 10 of them found the back of the net. By Henry Zhu
By George Hu, Crimson Staff Writer

Trailing 10-5 heading into the fourth quarter on Saturday, the Harvard men’s lacrosse team knew that it would need a monumental effort in the final frame to rally past conference rival Princeton. But with a possible spot in the Ivy tournament on the line and the seniors playing in their final home games at Harvard Stadium, the Crimson certainly had no shortage of motivation. The only question was whether there was enough time.

Harvard began the fourth quarter seemingly determined to answer this question, ripping off four straight goals in just over two minutes of gameplay to close within one point. Two penalties by the Tigers, including one by senior goalie Tyler Blaisdell, then gave the home side a 6-on-4 opportunity against Princeton’s backup netminder. It looked as if, fifty minutes after first faceoff, the two sides would be back to square one.

Just as it did throughout the game, however, Princeton found a way to beat back the Crimson attack. Harvard saw four consecutive shots during the man-up opportunity either blocked or saved, and as soon as the Tigers regained possession, their leading goalscorer, Austin Sims, found the back of the net to end the run.

The Crimson could not muster up another rally, and the visitors tacked on a couple of insurance goals later in the quarter to take the drama out of the last few minutes. With the 15-10 victory, Princeton (7-5, 2-3 Ivy) remains in contention for a spot in the conference tournament. Harvard (7-5, 2-3), despite the loss, still holds qualification hopes as well.

“It’s a disappointing result for us, for sure,” said Crimson senior goalie Robert Shaw. “But with one huge game left, we know we still have everything to play for and we’ll make sure we make the necessary adjustments this week to come out strong against Yale.”

If Harvard manages to overcome the Bulldogs, who are currently undefeated in conference play, it will also need a Princeton loss to Cornell to secure a spot in the tournament. Likewise, the Tigers need a loss by Brown in addition to winning their own matchup to qualify.

But before any of these scenarios were set in stone on Saturday, the two teams played through a highly entertaining affair in front of a crowd of nearly 2,000. Even though it did not see many lead changes, the contest featured several momentum swings courtesy of big runs by both sides.

After the Crimson jumped out to a 2-0 lead, Princeton put together a dominating 7-0 run spanning fifteen minutes to seize control of the game. Five different Tigers players put their names on the scoresheet, with four assists coming from a sixth source, star sophomore Michael Sowers.

“We’ve shown the ability all season to shut teams down for extended periods,” Shaw said. “When we allow these big runs, it’s just a matter of losing focus, and it’s something we need to be much better about.”

Preventing runs is one challenge that Harvard had trouble with against Princeton, and not being able to stop Sowers was a big part of the issue. The attackman, who entered Saturday’s matchup leading the nation with 6.55 points per game, put together another strong performance with one goal and six assists. He constantly caused problems for the Crimson from the X, where he picked apart the defense with well-timed and well-placed passes.

“Sowers is a big talent, a really good distributor of the ball,” said Harvard coach Chris Wojcik ’96. “We knew that coming in and tried to disrupt his rhythm with slides and some tight defense, but credit to him and their entire offense for finding him in good spots where he could hurt us.”

Sowers’ pinpoint accuracy told the story of the game in a nutshell, as Harvard had more total chances but could not place the ball in the right spots to beat the Tigers’ Blaisdell. In fact, the Crimson had a season high 57 shots, including 30 on frame, but Blaisdell countered by matching his career high in saves with 20. His stellar play, combined with some poor shooting from the home side, doomed the Harvard offense to just 10 goals to show for its efforts.

Senior midfielders Carney Mahon and Joe Lang had 13 and 11 shots in the game, respectively, but combined for only six total points. Meanwhile, Princeton managed to limit Crimson star attackman Morgan Cheek to two goals and a single assist. Cheek remains three points shy of 200 and five assists shy of 100 for his career.

“Our shot selection needed to be much, much better,” Wojcik said. “Any time you’re getting over fifty shots but only ten goals, it can’t just be the opposing goalie. There’s a lot of things we need to fix on our side if we want a good shot next weekend.”

The game against conference rival Yale now looms even larger than it would in most years, as a loss against the Bulldogs would end Harvard’s 2018 season.