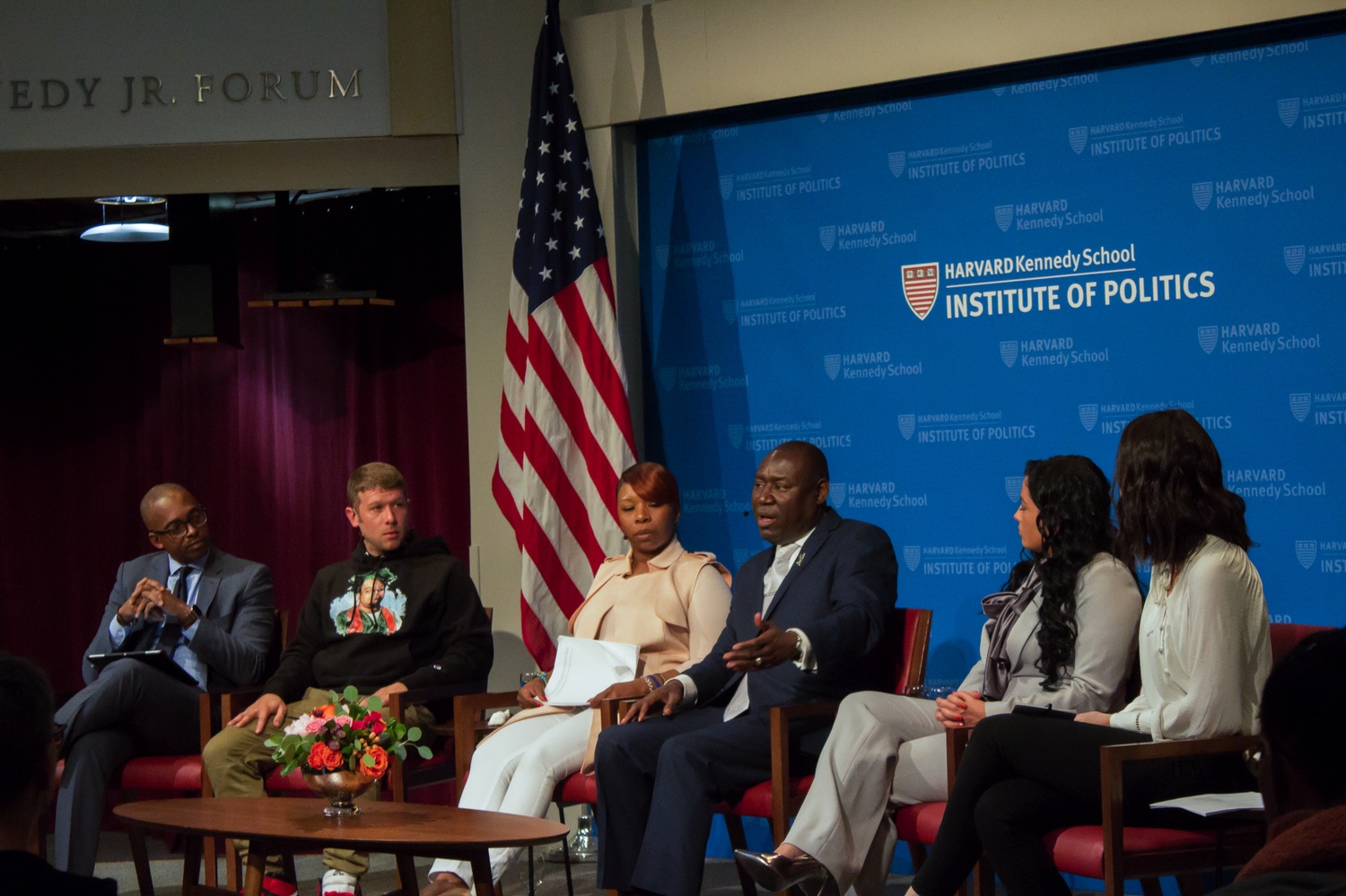 Lezley McSpadden, the mother of Michael Brown, spoke at the Institute of Politics Monday, along with two of the family's attorneys and the documentary filmmaker behind Stranger Fruit. By Awnit Singh Marta
By Paula M. Barberi, Crimson Staff Writer

Crump prompted McSpadden to talk about her political interests during the panel event: “Please talk about what you're contemplating.”

Several minutes later, McSpadden said that a run for office would constitute part of her broader advocacy efforts after the 2014 shooting of her son. Brown was 18 when he was fatally shot by a white police officer in Ferguson, Mo.

“We're pushing forward and we're coming through,” McSpadden said. “We have to get behind people that look like us and into elected seats so that they can really do what's right in our community. I'm going to start with me when I run for city council.”

“We're seeing new people being elected, but will it change what happened then? No. But we can change the course of what may happen tomorrow and what is happening now,” McSpadden added.

Pollack wrote to The Crimson after the event that McSpadden is considering the run “very seriously” and has spoken about it “publicly.”

A screening of Pollack’s documentary on Brown’s death, “Stranger Fruit,” preceded the panel. Pollock recounted hearing news of the 2014 shooting and said he moved to Ferguson immediately after to research the event.

“I didn’t want to go there with a Christopher Columbus-type attitude,” Pollock said.

Both Pollock and Crump commented on the media’s portrayal of Brown, saying they took issue with his description as a “thug.”

“Just imagine if it was your child, and then not only the death of the child, but the cover up of the character, which I think is the thing that is so unhuman about this and so different,” Pollock said.

Crump also pointed to what he identified as the differential treatment of minorities by law enforcement.

“We certainly can't forget about Dylann Roof, the young white supremacist who went and killed nine of the most innocent people you could ever find in a church in South Carolina,” Crump said. “Then the police not only take him alive, but they take him to Burger King to get a burger and fries. Where is the humanity for Michael Brown? For Stephon Clark? For Alton Sterling? For Philando Castile?”

Jasmine Rand, another attorney who represented the Brown family, said that lawyers are often limited in the advocacy they can provide.

“That's why Jason needs to tell this story through the film. And that's why Lezley needs to keep telling it. We all have to work together in as many mediums as we can to create social change,” Rand said. “ We can write the most beautiful laws in the world... but that's not enough because we have inequitable minds sitting on benches and inequitable minds sitting in jurors boxes and they're going to continue making inequitable resolutions. Being a lawyer is not enough.”

Pollock concluded the panel event with an entreaty to audience members to become involved.

“In terms of the movement, please connect with us. We're going to be here. I think that today can be a historic day in reopening the case,” Pollock said. “We will look back at this day to the people in this room and remember that it started here at Harvard.”