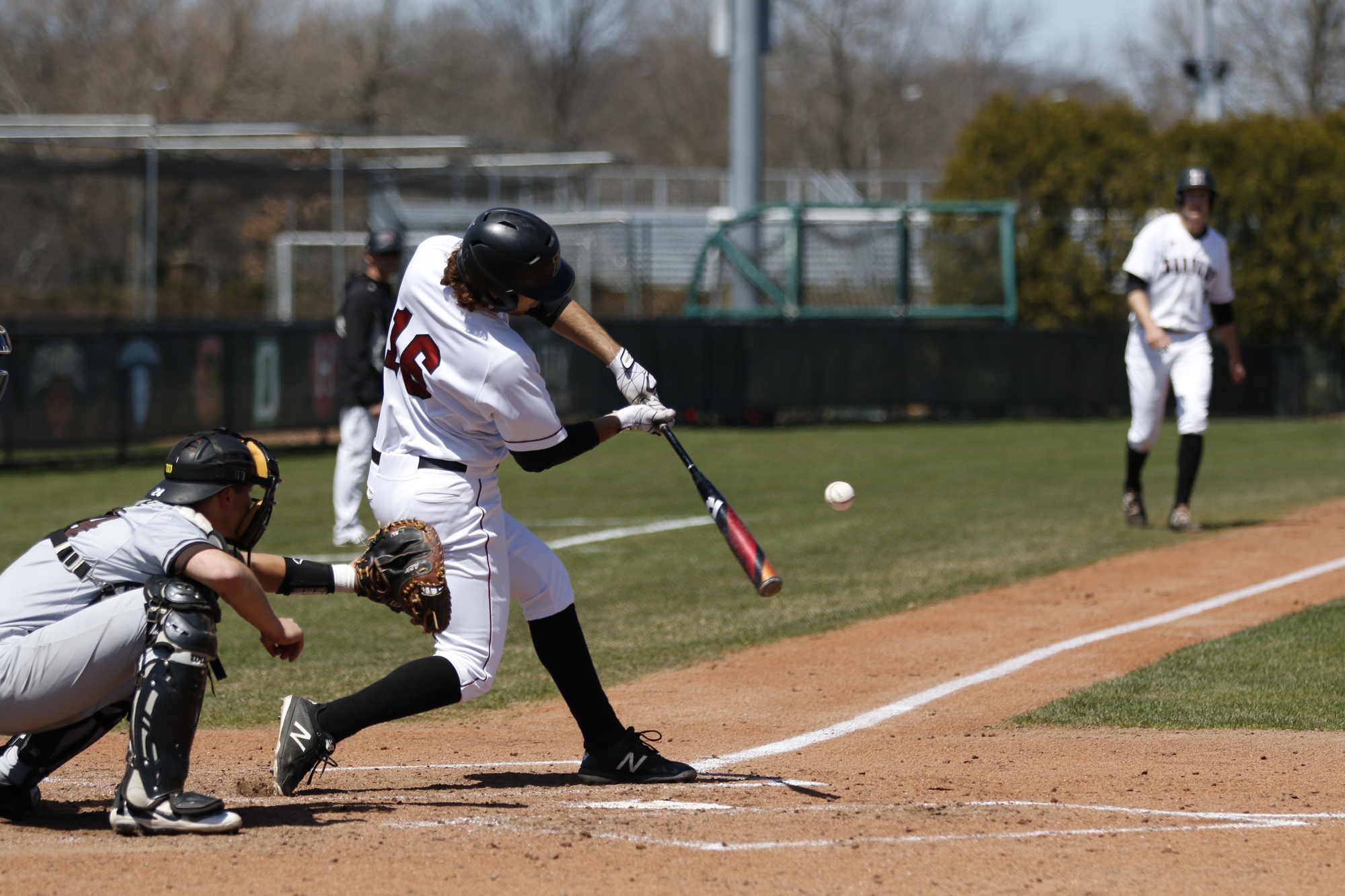 Junior Jake Suddleson hones in on a pitch against Brown. By Timothy R. O'Meara
By Bryan Hu, Crimson Staff Writer

For each of the past seven seasons, the Harvard baseball team hasn’t been a competitive Ivy League squad. From 2011 to 2017, the Crimson lingered amongst the bottom half of the Ancient Eight standings, twice finishing in the cellar and never finishing above two games under .500 in conference play.

This year’s squad has rejuvenated Harvard’s status in the Ivy League. The Crimson is now gunning for its first Ivy League Championship title since 2005, when it defeated Cornell at O’Donnell Field in Cambridge, Mass. Thirteen years later, Harvard might just have what it takes to get back to the championship series.

Led by senior second baseman Matt Rothenberg’s 7-for-12 series at the plate, the Crimson convincingly swept a pivotal midweek tilt at Princeton to propel itself back into the thick of Ivy contention. Harvard (19-17, 9-6 Ivy League) now joins Columbia (14-23, 9-6) in a tie for second, while the sweep puts a serious dent in any chances that Princeton (10-20, 7-8) had at making the top two.

The series was a convincing one—the Crimson outscored its Ivy rivals by 16 combined runs across the three games and trailed for all of just one half-inning.

On Tuesday, Harvard took the opener in Princeton, N.J., 5-1, behind a balanced attack and lockdown pitching, then rocked the Tigers for 14 hits and 13 runs in a 13-6 victory in the nightcap. With a chance at its first Ivy sweep since 2009, the Crimson finally closed out a series this season, dropping Princeton, 8-3, on multiple-RBI days from junior first baseman Pat McColl and sophomore two-way player Hunter Bigge.

“We’re definitely happy right now, but we’re not satisfied,” said junior center fielder Ben Skinner, who has keyed the Harvard offense all season long in the leadoff spot. “We’re looking ahead to three big games against Cornell, and I think we put ourselves in a good position, we’re excited going forward.”

The last time the Crimson was in contention for the title was in 2010, when it jockeyed for position atop the Ancient Eight table before fading away towards the end of the season.

Rothenberg went 3-for-4 at the dish, McColl drove in three runs on an RBI single and double, and freshman righty Enzo Stefanoni threw four innings of shutout relief ball to lead Harvard over the Tigers in the series-capper on a cold and wet Wednesday afternoon at Clarke Field.

Bigge got the scoring started with a solo shot in the second, and McColl and junior slugger P.J. Robinson tacked on two more with RBI hits in the third to stretch the lead to 3-0. After Princeton knotted the game at three in the sixth, the Crimson offense put up five straight tallies to bring out the brooms.

Stefanoni gave up four hits, struck out two, and walked none, lowering his ERA to 4.05 in 13.1 innings of work this season.

“Enzo, coming in, he really showed that he has a big heart,” Skinner said. “He just did a great job.”

The rookie’s work came in relief of junior righty Simon Rosenblum-Larson, who, like senior Noah Zavolas, was working on short days’ rest, having started against Brown just four days prior. Rosenblum-Larson, after getting the no-decision against Brown, got another no-decision after pitching a short bullpen-like session of 3.0 innings to start the game. The hurler struck out seven of the 14 batters he faced to up his K/9 to a team-leading 11.19.

Freshman righty Jack Mahala worked the fourth and fifth innings and gave up just one hit, though he was charged for two earned runs.

Letting the Tigers tie up the game at three, however, proved no issue for Harvard, as junior catcher Devan Peterson broke the tie with an RBI single to score freshman shortstop Buddy Mrowka. McColl, an RBI machine in the two-hole, kept the scoring going with a double to score Peterson and Rothenberg.

The series, meant to have been the Crimson’s Ivy-opener, had already been delayed twice. The third attempt looks like it was, indeed, the charm for Harvard.

On Tuesday evening, the Crimson won a big 13-6 matchup to guarantee a series win and begin pulling away from a mediocre .500 record.

Skinner went 4-for-5 at the top of the lineup and stole yet another base to lay the foundation for Harvard’s day. McColl got on base three times behind Skinner, setting the stage for Robinson to drive in three runs on two hits in the three-hole.

Whereas the early goings in the season witnessed Harvard use big innings and big days from select hitters, recent games have shown a trend towards runs produced by timely hitting up and down the lineup.

Sophomore outfielder Jake Suddleson drove in two and scored three times in the cleanup role, hitting a triple and a homer along the way. Bigge reached base in four of six plate appearances and scored twice.

That the Harvard offense is starting to come alive is evidenced by the fact that the squad now has seven everyday players hitting .275 or above—Peterson, Mrowka, McColl, junior catcher Jake Allen, Rothenberg, Robinson, and Skinner. That kind of platoon continuing their hot streak can only mean incoming damage for its Ivy opponents.

The Crimson players also tend to defer to the success of the offense as a whole.

“It felt good, just getting pitches I could handle and putting good swings on them, not trying to do too much, just getting something I could hit,” Rothenberg said. “It was good to help my team out this week.”

Zavolas got the start on the mound, also pitching three short innings on just two days’ rest. His scoreless innings streak, however, was snapped at 24.0, as the Tigers got a run across in the first. The senior got the win, moving to 6-1. Sophomore righty Grant Stone tossed 4.0 innings of two-run ball behind him.

Nothing more could be asked out of a ballclub than a solid wire-to-wire win, with timely hitting, great defense, and effective pitching.

Harvard outhit Princeton 10 to seven, committed zero errors in the field, got six stellar innings from freshman starter Buddy Hayward. Hayward was followed up by a rare three-inning save from sophomore Kieran Shaw, enough for the visitors to take the series opener against the Tigers, 5-1.

Skinner and Rothenberg had the only multi-hit days on the visitors’ side, though Peterson did draw three bases on balls.

Robinson got the scoring started with an RBI groundout in the first, and the Bad Boys of Boston never looked back. Senior outfielder Austin Black, Skinner, Bigge, and Mrowka all followed up with single-tally RBIs to steadily grow the Crimson’s lead.

The tale of two the two rookie Buddy’s—Hayward and Mrowka—has been in full effect this season.

Hayward has worked 32.2 innings this season and sports an ERA just under 5.00, while Mrowka has batted .278 in 54 plate appearances.

One last key to Harvard’s success was its clean fielding all series long. Compared to Princeton’s seven errors, the Crimson committed just two errors on the series, something it sorely needed, as its fielding percentage has been a weakness all season long.

“Defense is definitely a part of the game that our coach emphasizes,” Bigge said. “If we’re having a tough day, then we like to get our ground-balls the day after, and come out the next series and just perform at our highest level. I think Princeton was a good example of that.”