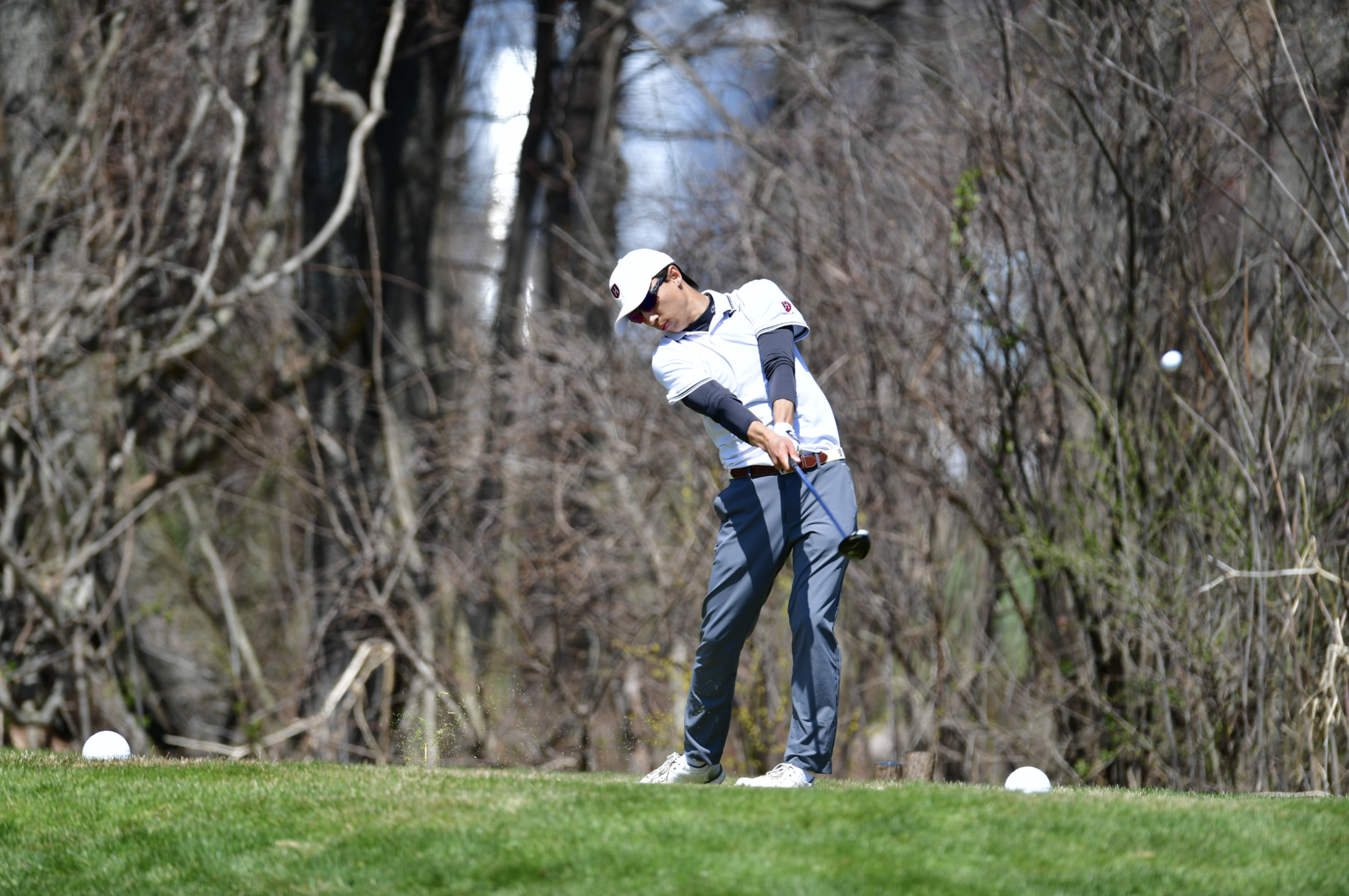 Freshman Grant Fairbairn drives the ball down the fairway. By Courtesy of the Ivy League
By Max McEvoy, Crimson Staff Writer

After spring break training and two tournaments, the Harvard men’s golf team rounded out its short spring schedule with the competition that defines the season: the Ivy League Championship, hosted in Stonewall, Penn. Two years ago, the Crimson won the competition for the first time in 42 years, and a year later, it took the cup again. This weekend appeared to be a golden opportunity for a three-peat, as the team was tied for first entering the final day of play.

But it was not to be. Harvard slipped to a third place finish after a difficult final round.

Yale, who were the favorites entering the tournament after strong performances this spring, lived up to form, winning by 22 shots and shooting a tournament team low of +2 in the final round on Sunday. Dartmouth had a colossal final day as well, jumping from sixth to second, edging out the Crimson by a single shot. Harvard beat fourth-place Cornell by the same slim margin. By the end of competition, the gap between second and fifth was just four shots – the fight for second came down to the wire.

The Bulldogs managed to pull away from any late drama, improving upon each day, ensuring an impressive win buffer. At the bottom of the table, Brown (sixth) Princeton (seventh), and Columbia (eighth) followed Yale’s trend of improvement, but extremely poor performances on the first day left very little room for error, and it showed on the scorecard.

The big loser this weekend was Harvard who, after a strong first day, had an even better second. It all unraveled for the Crimson however, in the third round, where the team shot +25 - the worst team score from the final round. The Crimson was left frustrated with the third round performance.

“It was just one of those days,” said captain and senior Greg Royston. We played considerably under our potential, if we were at our best I believe we would have won. Today [the final round] we were just off, no one had a great day. I was pleased with the effort we gave, however, we were all very excited and I thought we had a really good chance coming into the final round. We had the right attitude today it was just one of those days.”

The dip in form from first and second to the final day of competition was unexpected given the conditions at play. The weather on day one – Friday – was abysmal, with strong winds and a chill unbecoming of the Northeast in mid-April. All across the board, the Ancient Eight shot their worst scores. The second day, Harvard’s best, brought warmer weather though the wind persisted. On Sunday, the wind dissipated and the temperature was in the mid 50s – the level of control the golfers should have had increased, but here the Crimson faltered.

The course, which was in prime condition, was not a simple one. With tight and long fairways, a strong first shot was paramount, the opposite landing players in an early hole. This proved to be the undoing of the seven eventual runners up.

Though the team ultimately failed in its quest for a three-peat there are positive signs going forward. This is a young team, with three freshmen, two sophomores, one junior and one senior. Royston will be the only graduate. With this comes continuity, and an exciting future. Freshman Grant Fairbairn followed up his strong showing at the Princeton Invitational with a solid weekend in Stonewall.

“For Grant as a freshman in his first Ivy Championship, this was a really great performance,” said Royston. “He did all he could to advance the tea. It was particularly impressive because he didn’t play in this fall, then came out big this spring.”

For Royston, the tournament was his final match playing for the Crimson. Throughout his four years with the team, he has consistently been a top performer, making history, driving the Crimson to back to back Ivy League Championships in his sophomore and junior year. His teammates will miss his passion and commitment to the team.

“I’ve spent three years with Greg, four if you consider that he’s the one that took care of me during my official visits,” said junior Aurian Capart. “Greg graduating is a tough blow for the team because he is a fantastic player and a great teammate. Fortunately, we built many memories together, especially the last two Ivy League Championships wins. We are losing our captain but also a great friend in Greg.”

While the Crimson look to grow in the offseason, its goal for next year is simple: a third Ivy Championship in four years.