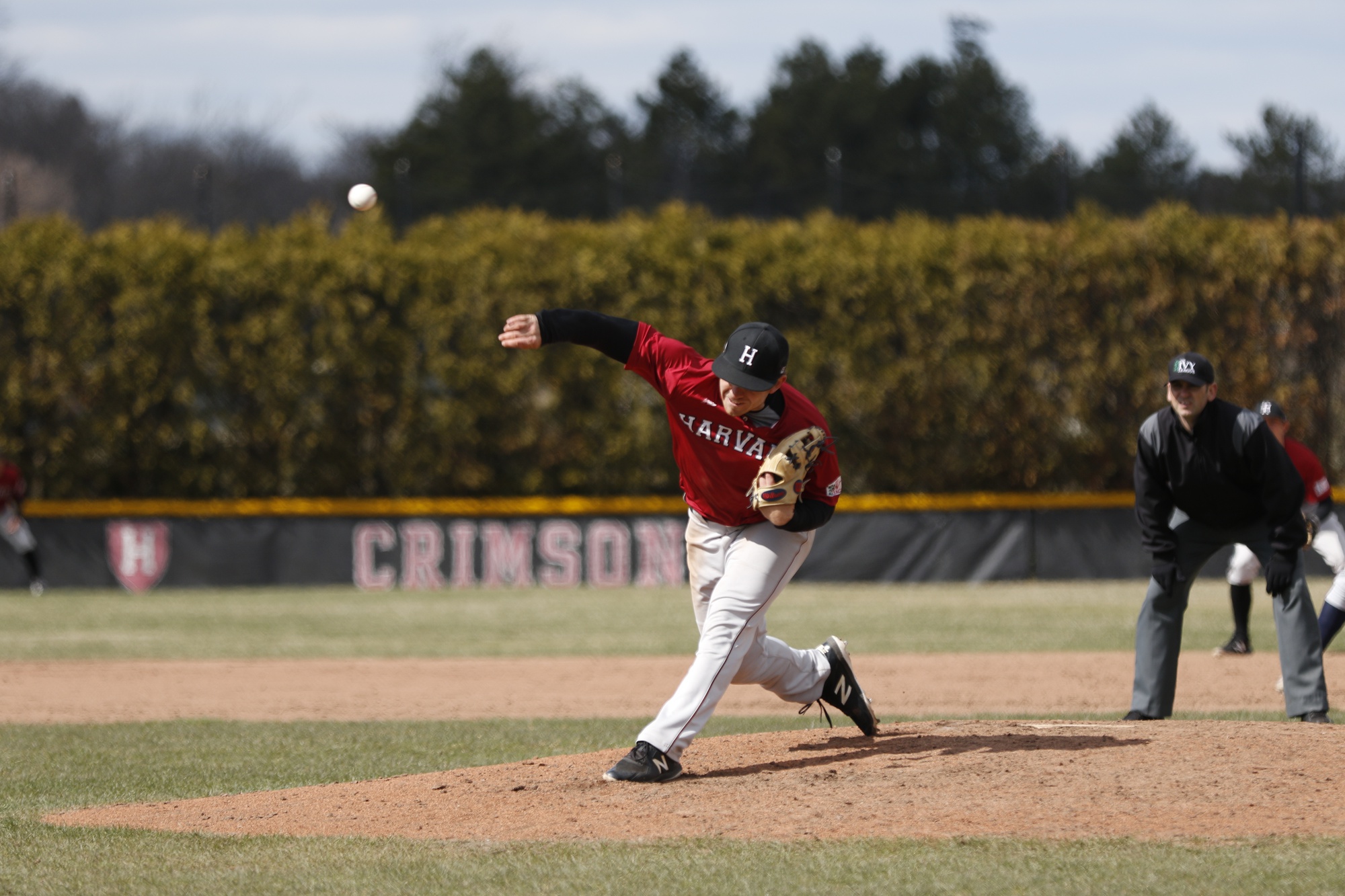 Sophomore righty Hunter Bigge, who struck out eight Quaker batters across 4.2 innings on Saturday, took the loss after allowing two runs in the eighth inning. His ERA now stands at 2.60 on the year.
By Bryan Hu, Crimson Staff Writer

Sophomore righty Hunter Bigge, who struck out eight Quaker batters across 4.2 innings on Saturday, took the loss after allowing two runs in the eighth inning. His ERA now stands at 2.60 on the year. By Timothy R. O'Meara

As senior starting pitcher Noah Zavolas said, it’s nice to finally be able to sleep in your own bed for a weekend.

After 23 games on the road, the Harvard baseball team (12-14, 3-3 Ivy League) finally returned home last weekend, playing games at O’Donnell Field in Cambridge for the first time in 2018.

The home confines and a bleacher full of Crimson fans must have done good things for the players, as Harvard took a series from Penn for the first time since 2010.

The Crimson won two of three against the Quakers (8-17-1, 3-5-1), putting on both pitching and hitting clinics in Saturday’s doubleheader before narrowly missing out on the sweep on Sunday afternoon. These results bring Harvard to a 12-14 overall mark and a 3-3 Ivy record.

Zavolas was the lynchpin for Harvard in the series-opener, tossing 7.0 innings of one-run ball in a 5-2 win. The Crimson followed that up with an offensive explosion, putting up a couple of crooked numbers in a 14-5 nightcap triumph. The next day, Penn struck back in the series-closer, preventing a sweep by scrapping out a 6-5 victory.

“We always prep here during the fall, in the bubble in the winter, and being able to actually sleep in your own bed for a weekend is always a leg up,” Zavolas said.

Harvard won’t be back home again until April 21, when it takes on Brown in Ancient Eight action.

Baseball can become a game of responses, but for the Crimson on a bright and blustery Sunday afternoon, the late-inning response simply wasn’t there. The Quakers held on to a 6-5 victory after taking the decisive lead on a late 2-RBI single.

After taking a 2-0 lead on junior first baseman Patrick McColl’s two-run first-inning dinger, Harvard gave it away as Penn crossed the plate four times in the fourth. The Crimson immediately struck back, scoring three in the bottom half of the frame to reclaim a 5-4 lead.

Despite striking out the side, sophomore third baseman/pitcher Hunter Bigge allowed the Quakers’ decisive runs in the eighth. Bigge got the hard-luck loss after giving up two earned runs and striking out eight in 4.2 innings of relief.

Harvard was sloppy in the field, committing five errors on the day.

“Errors are going to happen,” Bigge said. “At the end of the day, if I located some pitches better, those [errors] wouldn’t have mattered that much. Errors are part of the game of baseball and we’re going to practice our fielding and get better.”

Junior center fielder Ben Skinner went 4-for-5 at the dish, upping his season average to .343. A constant threat on the bases, the leadoff man swiped his team-leading ninth stolen base of the season.

Sophomore shortstop Chad Minato and freshman outfielder Tommy Seidl both collected RBIs in the fourth, the latter driving in his first runs of his rookie season on a two-out, two-run single.

Freshman two-way player Buddy Hayward got the start on the mound and went 3.2 innings, giving up four earned runs while striking out five. The rookie, already garnering Ivy League attention, has a 5.76 ERA and is second on the team with a 10.08 K/9.

Scoring 14 times on just 12 hits, the Crimson cracked the nightcap of Saturday’s doubleheader open early, putting up eight runs in the second before piling on a five-spot in the fourth.

Crooked innings were common for Harvard all weekend. The runs came in bunches—the Crimson only posted a single one-run inning in the series.

“For us, hitting is really contagious,” Zavolas said. “When the top of the lineup, or even the middle or bottom of the lineup sets the table, then we can push them around, and it really helps us get going.”

Spotted a huge lead, junior righty Simon Rosenblum-Larson had no problem keeping the Quakers at bay, giving up one earned run in 5.2 innings of work. Three bullpen relievers helped solidify a 14-5 win.

Senior left fielder Austin Black led the offensive charge, knocking in a career-high five runs on two hits. Skinner once again continued to get on base, posting his first of two 4-of-5 games with a RBI and a run scored. Bigge, playing at the hot corner on defense, went 2-for-3 and hit the first home run of his career, a two-run shot to left that also scored Black.

“I saw a fastball inside…I was looking to get something to hit out over the plate, probably hit a sac fly out there, and luckily I got all of it,” Bigge said. “It felt good to kind of get into one.”

Designated hitter P.J. Robinson, after his heroics in the Beanpot semifinal against B.C., posted another big day, going 2-for-3 with two walks, three runs scored, three RBIs, and a solo shot late. Robinson’s slugging percentage has been slowly creeping up and now sits at a team-leading .478 on the year.

Harvard was especially efficient with its hitting in the series-opener, scoring five runs on just six hits and one walk. All five runs came in yet another crooked-number third inning in which 10 Crimson batters stepped to the plate.

With his team unable to get consistent scoring going, Zavolas put the team on his shoulders, throwing 76 of his 106 pitches for strikes in a seven-inning, scoreless performance that scattered seven hits and KO’d six Penn batsmen. Sophomore Kieran Shaw closed out the game with a six-out save to preserve the win.

“It felt really good, especially being able to come out here and pitch here at home for the first time in awhile,” Zavolas said. “It was nice because we can see the family and the home crowd as well.”

Zavolas now leads the Harvard squad with 39.0 innings of work and a 3-1 win-loss record as a starter.

Bigge got the third-inning rally started with a leadoff single, which was followed by a Minato walk and a two-out McColl RBI single to score both runners.

Sophomore outfielder Jake Suddleson, Robinson, senior second baseman Matt Rothenberg, and Black kept the merry-go-round going with five straight singles and walks. By the time Bigge came back up to fly out and end the inning, the Crimson had scored five in the blink of an eye to take a 5-1 lead.