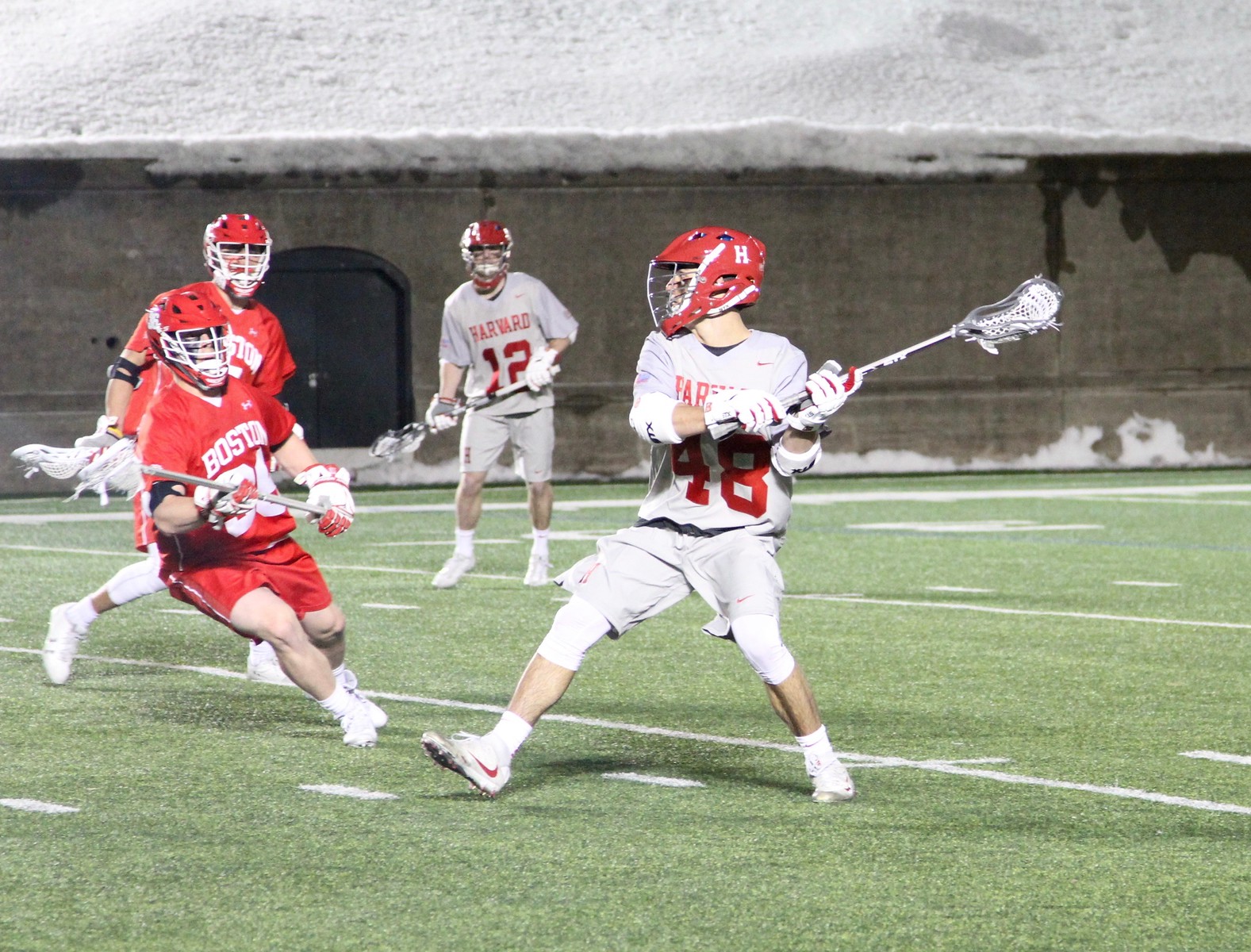 The Crimson has seen some key contributions from its freshman class this year, from players like Kyle Salvatore (48). Salvatore picked up his first career hat trick in the win over Dartmouth last month. By Henry Zhu

Entering Saturday’s matchup against No. 10 Cornell, the No. 19 Harvard men’s lacrosse team knew that if its defense could contain Jeff Teat, it stood a good chance of picking up a big road win. But limiting Teat, the Big Red’s star sophomore attackman who broke its freshman scoring record last season, is easier said than done.

The game hung in the balance for much of the first half, with the two teams trading goals in the second quarter. Teat’s strong play kept Cornell just a step ahead, as he scored or assisted on seven of his team’s eight goals in the half to stake the Big Red to 8-6 halftime lead.

After assisting on two more goals in the third quarter, Teat then scored his final goal with 12:51 remaining in the fourth, capping off a 4-0 run that put the game out of reach for the Crimson. By the time the dust settled, he had four goals and a career high eight assists, matching another career high with 12 total points.

Behind Teat’s strong play, Cornell (7-3, 3-1 Ivy) comfortably topped Harvard (7-3, 2-1 Ivy), 15-11, handing the visiting Crimson its first conference loss of the year. Harvard drops to the third spot in the conference, while the Big Red now sits second behind No. 3 Yale, which is still undefeated in the Ivy with a 4-0 record.

“We didn’t play our best game, by a long shot,” said Crimson coach Chris Wojcik ’96. “Credit to Cornell, they played a very good game offensively, and really controlled things with their face-offs and time of possession.”

The Big Red certainly came out firing on Saturday, as a 4-0 run in the first quarter threatened to knock Harvard out of the game early on. Junior midfielder Jake McCulloch tallied two goals during the run, including the fourth with 2:30 remaining in the frame to push Cornell out to a 4-1 lead.

The Crimson responded well, however, scoring three unanswered goals to draw even midway through the second quarter. Two of the scores came in man-up opportunities, a positive for the Harvard all day as the team converted 5-of-7 total opportunities. But within minutes, the Big Red hit back with two goals of its own, taking a lead it would ultimately never relinquish.

Cornell’s play in the third quarter then broke the game open, as the home side collected nine ground balls to the Crimson’s two and dictated play throughout the 15 minutes. Sophomore face-off specialist Paul Rasimowicz won 3-of-4 face-offs in the period, part of a strong day overall in which he put up a 19-of-30 line at the X. Without the ball for much of the third, Harvard could only watch as the Big Red stretched its lead to 11-6.

“A frustrating part of the game for sure,” said Crimson captain and midfielder Sean Coleman. “We didn’t have the focus we needed for the whole 60 minutes, and they just wanted it on the ground more than us. That’s something we’re definitely going to look at and try to fix before next week’s game.”

On Harvard’s side, senior attackman Morgan Cheek once again put up a strong performance with two goals and three assists, while classmate Carney Mahon recorded his first hat trick. At the end of the day, however, it was not enough to keep up with a career day from Teat.

“He’s obviously a very good player with a great understanding of the game,” Coleman said. “We had a game plan for defending him heading in and we just didn’t execute it well enough. We could have limited the damage, and we really paid for not executing it.”

Teat’s performance put him at 65 points on the year, good for second in the nation behind Duke senior Justin Guterding, who has 68. Cheek is not far behind with 49 points, hovering near the top ten in the country.

The Crimson will need all it can get from Cheek and the other seniors on the team as they make the final pushes of their college career. The schedule certainly doesn’t get easier, as difficult road trips to Penn and Yale remain, along with a home tilt with Princeton.

“We’ve just got to continue doing what we do, making adjustments and having a good mentality,” Wojcik said. “Our guys will be focused when we get back on the field on Monday and we’ll fix what we need to fix before heading down to Penn.”