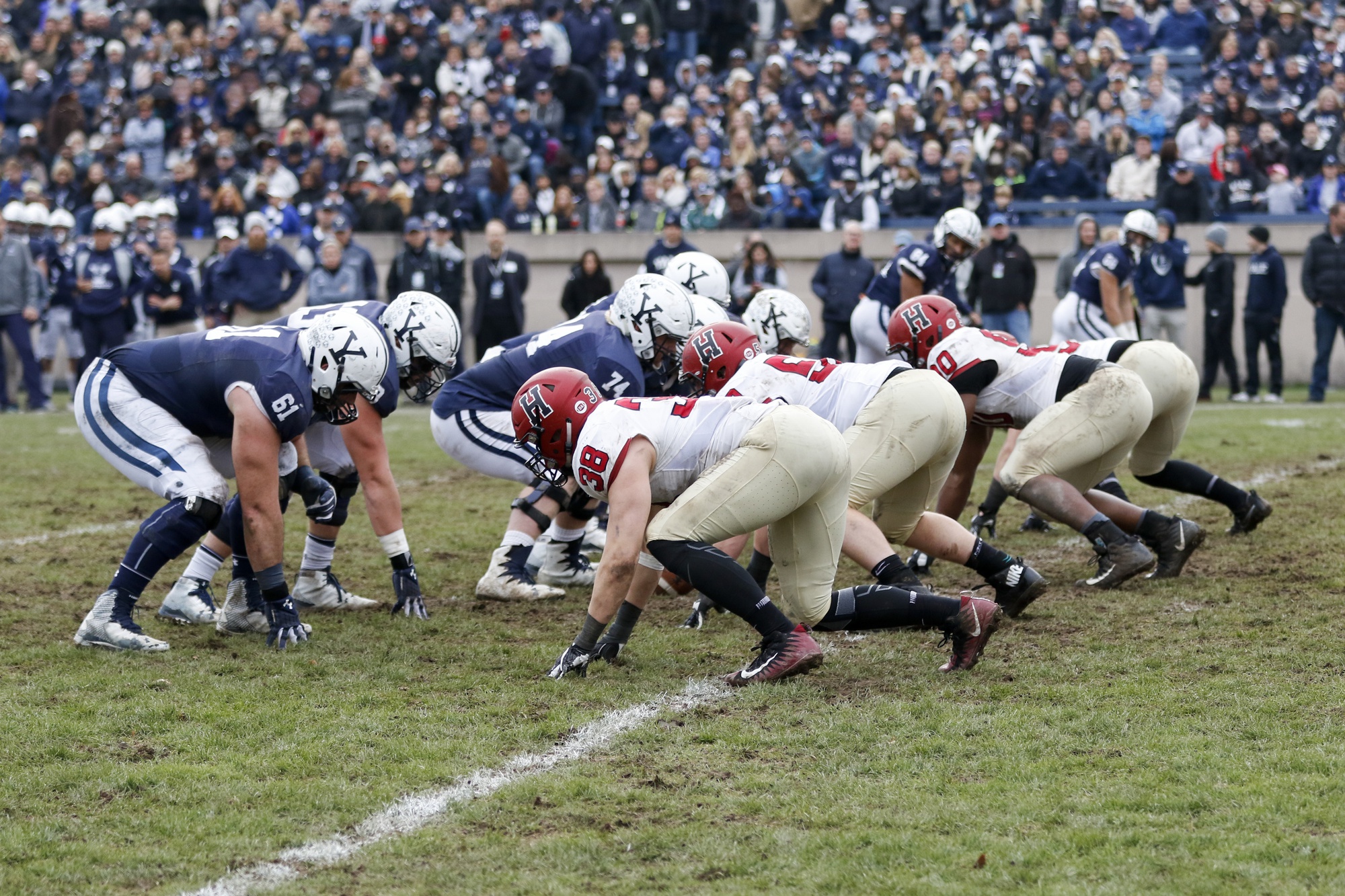 Harvard looks to recover from a 24-3 loss in the 2017 edition of The Game when it takes the field this November against Yale. By Timothy R. O'Meara
By Jack Stockless, Crimson Staff Writer

Harvard-Yale is the second-oldest college football rivalry in the country, behind only Princeton-Yale. Since 1875, the Crimson and the Bulldogs have gone to battle 134 times in a contest that defined each team’s season, even during years in which either or both teams had no hopes of winning the Ivy League.

Since The Game has such a long and storied tradition, it is only fitting that it is played at two historic stadiums. Alternating every year, Harvard Stadium and the Yale Bowl play host to the annual mid-November showdown.

This year, though, a third famous stadium joins that group. Harvard and Yale will face off at Fenway Park in Boston on Saturday, Nov. 17.

“I think that’s pretty cool,” freshman quarterback Jake Smith said. “I’ve never even been to a Red Sox game so that might be my first time in Fenway, which will be a little bit of a different feel. I was kind of looking forward to playing in the Colosseum last year, but Fenway, all the rich history there is going to be so cool.”

Planning the venue change was in the works over two years ago, and all the pieces finally fell into place last fall. Brett Miller, Project Manager, Special Events with the Fenway Sports Group, pointed to relationships at the highest level at both Fenway and Harvard as the main driving force behind the idea.

“It was...Mark Lev, our managing director, and Sam Kennedy, the president of the Red Sox...talking with folks over here that they’ve known for years and years,” Miller said. “One, we were looking for a game, and two, Harvard was looking for a place to play it. And I think it couldn’t have made more sense with Harvard and Yale being the second-oldest college football rivalry and Fenway being the oldest [Major League Baseball] park in the whole country.”

Fenway, which made its debut in 1912 as the home of the Boston Red Sox, is nine years younger than its counterpart in Allston. Harvard Stadium opened its gates for the first time in 1903, and the Yale Bowl followed shortly thereafter in 1914.

A few decades ago, Fenway was a semi-permanent football venue. The Boston Patriots played some of their home games at the ballpark when they were part of the American Football League, before joining the National Football League in 1970 and rebranding as the New England Patriots in 1971.

Fenway has played host to college football games in the recent past. In 2015, Boston College and Notre Dame played a neutral-site game there. Last year Fenway introduced its first Gridiron Series, in which it hosted three college games—including Dartmouth against Brown—and a slate of high school games.

Tailgating opportunities seem to be one of the main reasons why Harvard students come out in droves to support the Crimson. Though football fans surely abound as well, many undergraduates view The Game as more of a festive end-of-semester activity.

“We’re working on a lot of neighborhood entertainment options, and we’re trying to duplicate the experience we have over here [at Harvard],” Miller said. “There’s obviously some things that just aren’t going to be the same, but we’re working pretty diligently because we know that that’s such a big part of the game and the atmosphere.”

There is precedent for pregame entertainment at Fenway, however.

“With Notre Dame, we turned that into a whole fan fest and that was an incredible atmosphere, and if we’re able to do the same thing for Harvard-Yale I think that would be awesome, but nothing is set in stone,” Miller said. “We look forward to finalizing that and releasing all those details in the next few months.”

At first glance, Fenway Park does not appear to be an ideal venue for a football game. Many seats are low to the ground, which can obscure fans’ views of the action, and the seats are angled in such a way to be optimal for baseball, not football.

“Obviously the lower seating is not as ideal,” Miller said. “It’s great for baseball. That’s why we play baseball there, but it’s pretty cool for football. And it’s loud.”

“I had concerns about it, but actually starting with Notre Dame and Boston College back in 2015 and going through last year, it’s incredible,” Miller said. “It’s such a small, intimate park, and unless you’re sitting directly behind a pole, which there’s about four seats in the whole park that do that, it’s a really great view.”

Fenway Park is not unique in hosting college football games in the fall. According to Miller, neutral-site games are becoming more popular in the collegiate ranks.

"I think if you’re going to move it, you’re going to be moving it to a place like Fenway,” Miller said. “Sort of offers that same historical perspective and relevancy. I think people are going to stay for every second of the game and enjoy it and know that it’s a once-in-a-lifetime opportunity probably.”

Though playing a storied rivalry game at such an historic ballpark is surely different than any run-of-the-mill game, Harvard football will have to wait until time expires in the fourth quarter to take it all in.

“When the game rolls up, we’re just going to treat it like another game and another day,” junior running back Charlie Booker said. “It’s definitely not just another day, but that’s just the mindset I always have to go in with.”

A previous version of this story stated that Harvard-Yale is the third-oldest college football rivalry. In fact, it is the second-oldest and the third-most played.