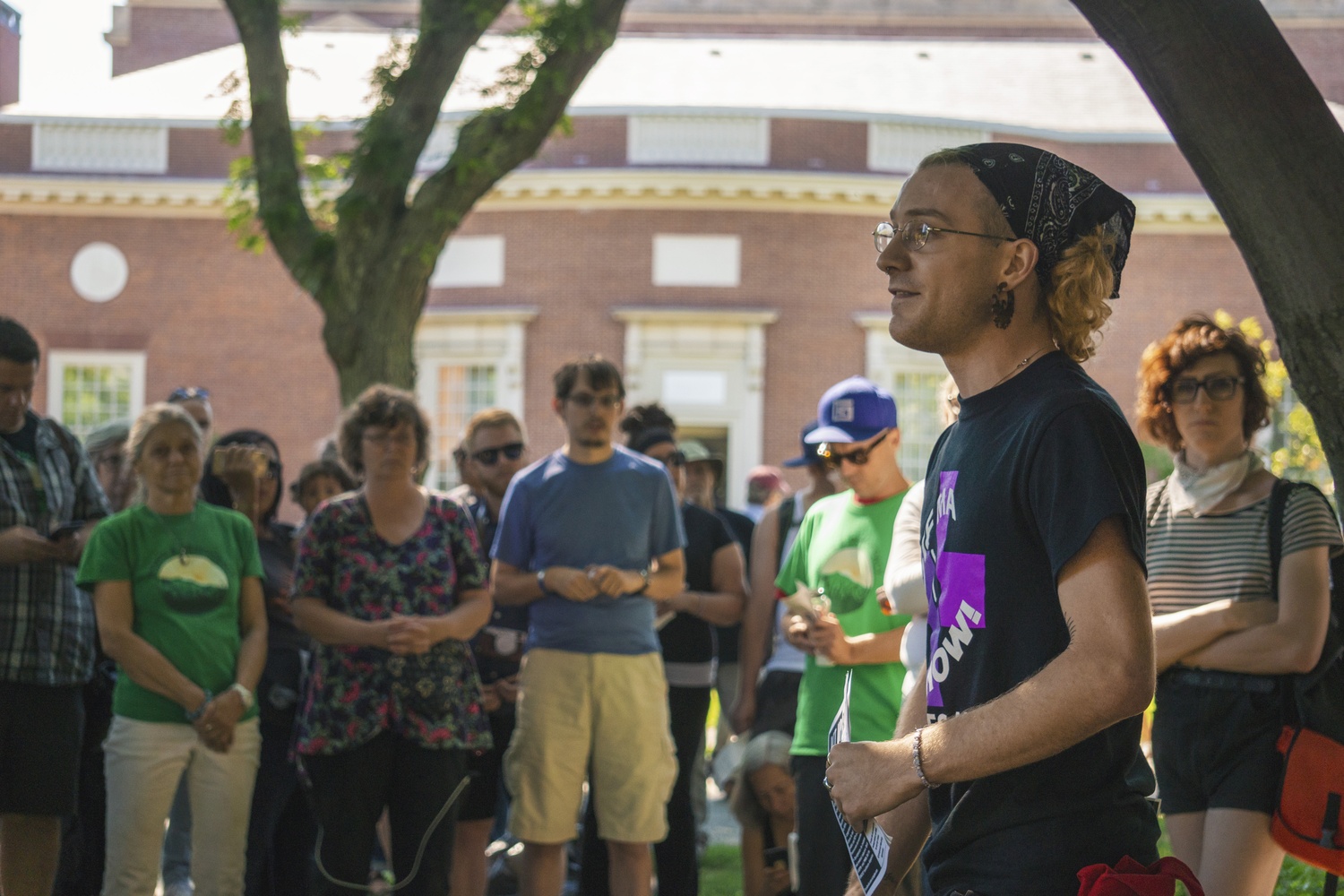 Shouting “people over profits” and throwing pill bottles on the floor, more than 30 demonstrators held a “die-in” in Harvard's Arthur M. Sackler Museum Friday to protest its connections to a family they said spurred on the opioid crisis and profited from addiction nationwide.

Led by photographer Nan Goldin—whose works are displayed in the museum—protesters demanded Harvard refuse future funding from the Sacklers. They also urged the Sackler family to invest in the overdose reversal drug naloxone, safe injection facilities, and medication that can combat addiction. They charged that the family, which helps lead the multi-billion dollar drug company Purdue Pharmaceuticals, knew the pain relief drug OxyContin was highly addictive but downplayed its dangers when marketing it to doctors.

The Sacklers have drawn widespread criticism in recent years for the role some say the family played in spurring the nationwide opioid crisis. Though family members descended from Arthur M. Sackler—a philanthropist and drug marketer—do not have shares in Purdue Pharmaceuticals, his brother’s descendants have served on the company’s board.

The family has also donated extensively to Harvard, paying for the Arthur M. Sackler Museum, one of the museums that comprises the Harvard Art Museums and houses the University’s collection of Asian, Islamic, and Mediterranean art.

Medical School students and the Center for Popular Democracy’s Opioid Network—a band of more than 45 grassroots organizations that have formed in response to the opioid crisis—organized the demonstration.

Darshali Vyas, a fourth-year Medical School student, said she helped spearhead the protest because she thinks the opioid epidemic is “the emergency of our time.”

“This is a crisis, this is impacting our patients, they’re dying, and we want to help them,” she said. “A lot of deaths are very preventable, which I think I and a lot of my classmates have witnessed, and we feel that there is this need for urgent action.”

Robert Josephson, Purdue Pharmaceuticals’ chief director of communications, wrote in an emailed statement Saturday that the company shares Goldin’s “concern about the prescription and illicit opioid crisis,” is “committed to being part of the solution,” and feels that “more needs to be done.”

This is not the first time the Sackler’s donations have drawn criticism from Harvard affiliates. In January, Goldin urged the Art Museums not to accept donations from the family because of what she called their role in starting the opioid epidemic. Several members of the advocacy group Prescription Addiction Intervention Now, which Goldin founded, attended Friday’s protest.

Darius K. Gordon, national field organizer for the Center of Popular Democracy, said it was “important” to hold a protest at Harvard because the University is “a very prestigious place.”

“I think just having the Harvard name attached really brings a lot of attention to the issue that is brought up,” he said. “The sooner that we can resolve this issue the better for everyone.”

Demonstrators said they attended the “die-in” both to protest the Sacklers and to call for immediate action to fight the opioid epidemic.

Mardge H. Cohen, a doctor at Boston Healthcare for the Homeless, said she came to the protest because she is “upset and horrified” about the number of preventable deaths from opioid misuse.

“As a physician, as a person in our society, as a grandmother who sees kids playing in parks, I just think we need to address people who are very marginalized, very stigmatized,” she said. “It’s the major public health problem in many many areas in our country.”

“There’s so much that money can accomplish that Harvard has, that the Sacklers still have, that Purdue still makes,” Cohen said. “There’s just so many ways they can make a difference and we’re insisting that they do that.”

A previous version of this article incorrectly stated that Arthur M. Sackler played a major role in distributing OxyContin. In fact, Sackler died nearly 10 years before the drug came to market.