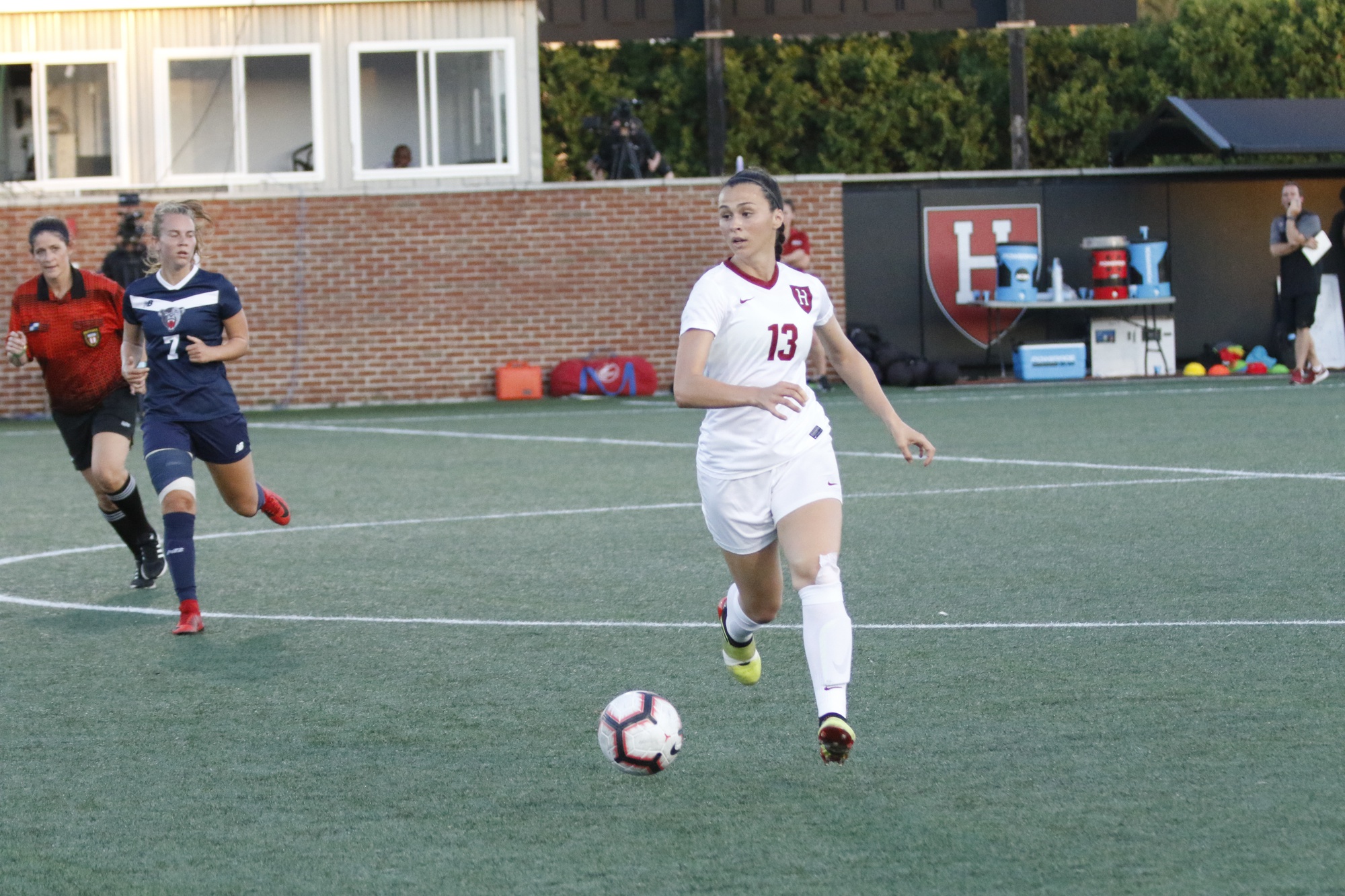 Going into its sixth contest of the season at Providence, the Harvard women’s soccer team had yet to record a first-half goal. It was not a matter of being in an offensive drought — the Crimson had scored six times in five previous games, including four in an outburst against Syracuse. All tallies had just come after halftime.

That finally changed on Sunday afternoon when star midfielder and co-captain Leah Mohammadi found the back of the net in the 29th minute. Receiving a pass from freshman forward Sophie Hirst at the top of the box, Mohammadi unleashed an arcing shot that snuck in between the crossbar and the outstretched arms of Providence senior goalie Shelby Hogan.

Harvard managed to control play for much of the remainder of the half, earning its first halftime lead this season. The second frame, though, was all Friars. The home side put three shots past Crimson junior goalie Kat Hess to reverse the tide and ultimately pull away for the 3-1 victory.

With the loss, Harvard fell to 2-4-0 on the season while Providence improved to 5-2-0. The Crimson now has two more games to iron things out before beginning conference play, while Providence will look to continue its torrid start to the season, which includes a perfect 4-0-0 record at home.

“We wanted to start out strong today, and we did,” Harvard coach Chris Hamblin said. “We wanted to be aggressive to start out the game and dictate the pace of play, and we were able to do that. Now, we need to extend that mindset throughout the entire 90 minutes.”

Playing in their sixth contest in 17 days, the minutes and miles the Crimson players have recorded did seem to catch up to them as the game went on. The Friars, in comparison, took the field four times during that same period of time.

Providence, however, certainly had the firepower to win the game from the beginning. The Friars had only failed to score in one of its six previous contests, a road game at No. 3 North Carolina that they dropped by the narrow margin of 1-0.

“For them to come out of the gates and win four out of six, with their only losses against North Carolina and Duke, we knew they were a good team,” Hamblin said. “We tried to contain them but in the end just gave them too much space to operate in, especially in that second half.”

Junior defender Olivia Lucia and sophomore forward Hannah McNulty provided the goals for Providence, with McNulty bagging a brace. Lucia’s goal tied things up in the 54th minute, while McNulty’s first goal in the 76th minute, which came off of a rebound in the six-yard box, proved to be the winner. She then added a well-placed finish in the 81st minute to seal the game.

“They [Friars] were a really good team and came out with a good game plan to break us down in the second half,” said Harvard midfielder and co-captain Zayne Matulis. “We had our chances to respond, but all credit to them.”

There were still positives for the Crimson, as Hirst’s assist in the 29th minute represented the first one of her collegiate career. A highly touted recruit coming out of high school, the freshman now has two goals and an assist to her name through just four games.

“I’m really proud of how Sophie has come on and immediately made an impact,” Matulis said. “The freshman class as a whole has been great. Everyone has been learning quickly and really growing into their roles on the team.”

Senior goalie Danielle Etzel also extended her shutout streak to 311 minutes with a strong performance between the posts in the first half. She made two saves to keep Providence off the board in the first half. Harvard will continue to look for contributions across its squad, from the freshmen to the seniors, as Ivy play nears.