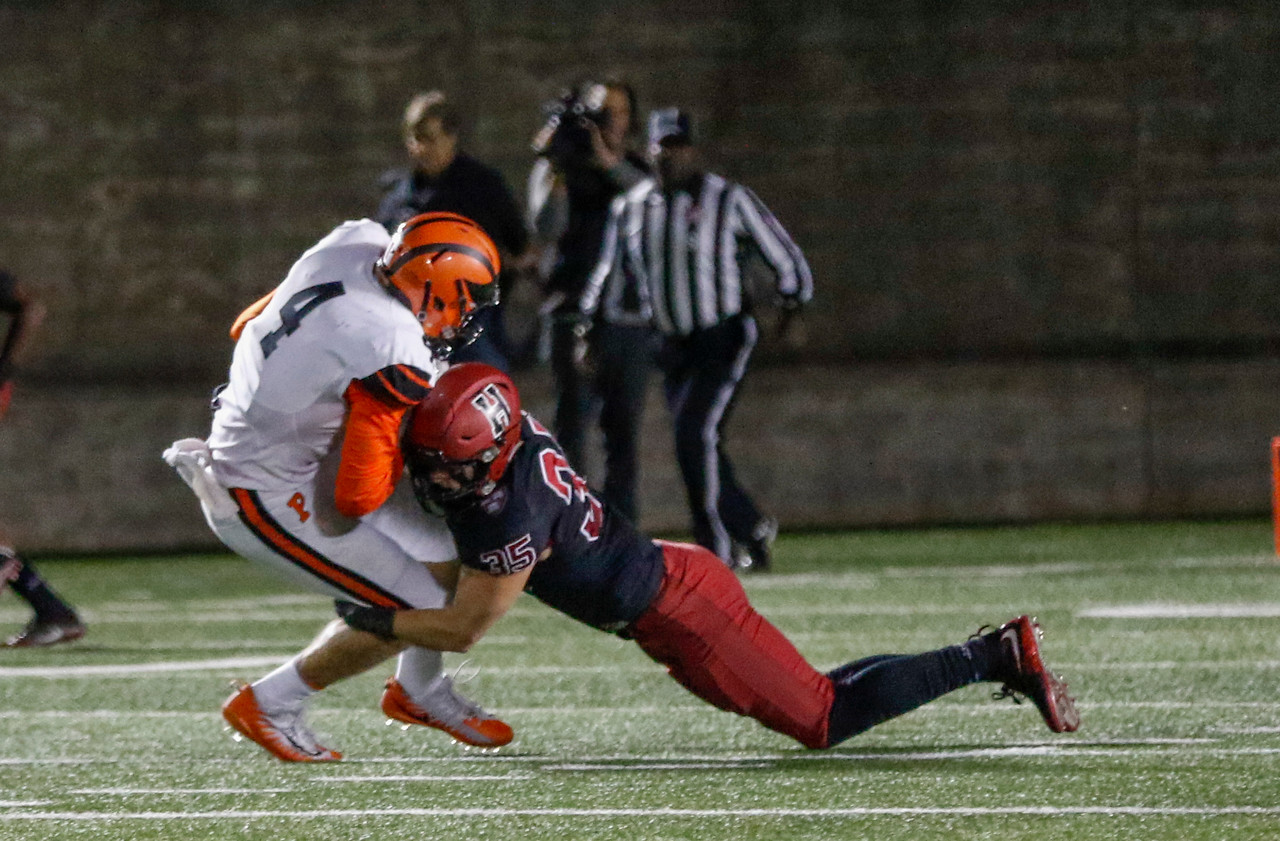 Ask captain Zach Miller what motivated him this offseason and he will give you a very simple answer.

“From the second we left for Thanksgiving break guys were grinding,” Miller said. “We’ve been working on it for nine months because we know the feeling of going 5-5. We know the feeling of seeing Yale walk off the field 9-1, beating us, winning the Ivy League Championship, putting a sour taste in our mouths. We’ve been working with that in the back of our minds every day.”

Harvard football had nothing to play for but pride when it entered the Yale Bowl last Nov. 18, and even pride escaped the Crimson by the end of the fourth quarter. Harvard was at the tail end of one of its worst seasons in recent memory — which says a lot, considering the team still did not fall below .500 — and to make matters worse, rival Yale dominated for a full 60 minutes. The Bulldogs triumphed, 24-3, and cemented themselves as Ivy League champions.

The Crimson has not had a losing season since 1998 when the team went 4-6, but head coach Tim Murphy’s main goal this fall is not necessarily to recapture the dominance that the squad displayed throughout the 2000s and into the 2010s. Rather, Murphy wants Harvard to “reach [its] full potential” following a rare down season.

“I know that that particular goal isn’t necessarily quantitative, but to me that’s the most important goal, whether that is to reach our potential and win every single game and an Ivy League Championship, or just to maximize whatever our talent level is,” Murphy said. “Beyond that, to be a better football team than we were a year ago, stating the obvious.”

The first stop on the Crimson’s road to improve its fortunes is a tough one. Harvard will kick off its season by hosting the University of San Diego, which received one vote in the FCS Coaches Poll and went 10-1 in the 2017 regular season before bowing out of the second round of the playoffs to perennial contender North Dakota State. The Toreros already have two games under their belts — the first a 38-9 drubbing of Western New Mexico and the second a 54-21 loss to UC Davis, which received 29 votes in the Coaches Poll.

Murphy and his team describe San Diego as an extremely physical team on both sides of the ball. It runs an under-center offense that features a brutal running attack and highly synchronized play-action passes over the top.

The quarterback in charge of the Toreros’ Stanford-style offense is Anthony Lawrence. The redshirt senior was named to the STATS FCS Walter Payton Award watch list before this season, and for good reason. In 2017, Lawrence threw for 3,131 yards, had 33 touchdowns to just three interceptions, and completed 65.5 percent of his passes.

Countering Lawrence and San Diego will be a veteran-heavy Crimson team, with a few younger impact players sprinkled in. The veteran presence that already existed on last year’s defensive unit will be replicated, as numerous players elected to play a fifth year, including Miller. The offensive unit also features a number of seniors who have previously played important roles on the team.

Starting at quarterback on Saturday, though, will be sophomore Jake Smith. In his rookie campaign, Smith showed flashes of brilliance alongside expected growing pains. Now entering his second season, he plans to take advantage of tireless offseason workouts and increased comfort with Harvard’s system.

“I’d say my confidence is at an all-time high right now,” Smith said. “Last year I was kind of thrown in the fire, kind of had to learn on the go. I think just the fact that I’ve gotten so many reps over however many months has just really made me feel a lot more comfortable.”

According to Smith, improved arm strength and decision-making will be key to his development in his second year quarterbacking the Harvard team.

One side effect of the Crimson’s stacked roster of upperclassmen is that freshmen will have to work that much harder to see on-field action.

“At any level, whether you’re Alabama, Harvard, Stanford, or Amherst College, it’s challenging to make an impact right away, and part of it is in the Ivy League you lose a lot of practice and meeting time in the preseason because of freshman orientation,” Murphy said. “If you’re going to compete for a championship, it’s pretty much going to be on the broad shoulders of your upperclassmen.”

Despite the fact that so many key pieces of Harvard’s roster have three or more seasons of experience under their belts, week one is often chock-full of unknowns. However, the Crimson aims to use this to its advantage as it prepares to suit up against the Toreros on Saturday.

“When they come in they’ve only had four or five days to prep for us, and we’ve been focusing on them since the beginning of the preseason,” Miller said. “We’re hungry.”