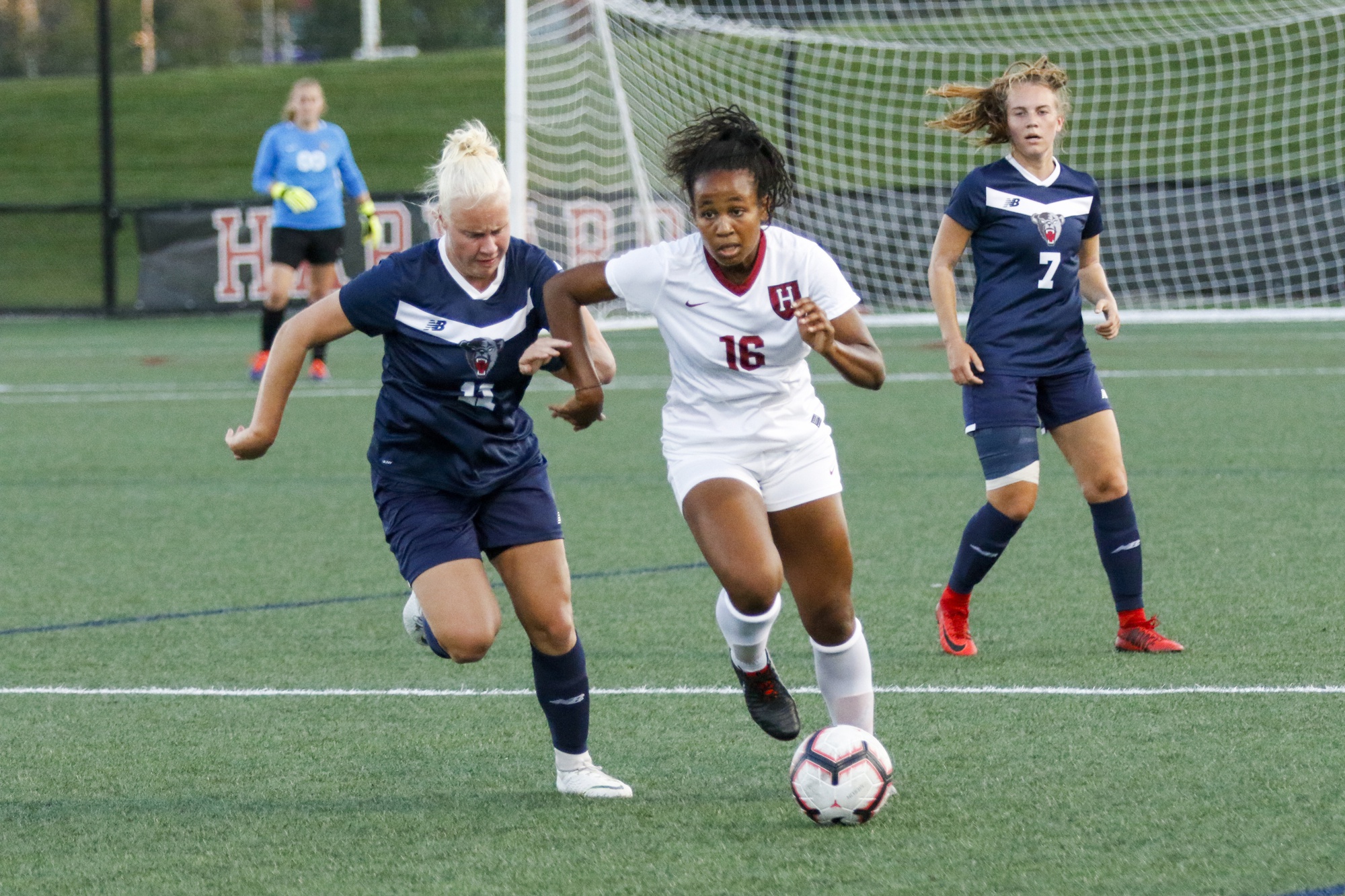 In a physical game Sunday afternoon at Ohiri Field, the Harvard women’s soccer team and the Northeastern Huskies brought the heat with a high-intensity game marked by 32 total fouls.

The Crimson responded forcefully, however, winning a 2-0 slugfest on first-half goals by senior midfielder Leah Mohammadi and freshman forward Sophie Hirst. The victory moves Harvard to 3-4 on the season and drops Northeastern to 3-6-1.

Gaining a sense of resilience and grit will be integral to a young team yet untested in Ivy League waters. The current Crimson team, leaning on a large group of rookies to drive it forward, perhaps left Ohiri having just taken a massive step forward towards becoming a hardened, seasoned squad.

“We’ve had some really good moments, and we’ve also had some challenging opportunities to deal with adversity as well, and I think [the coaching staff] challenged the team today to be able to manage the moment,” head coach Chris Hamblin said. “And as we’re preparing for Ivy League play, we want to possess the ball, we want to move the ball, we want to create some good chances, but at the end of the day, sometimes you just have to win ugly.”

Mohammadi, the team captain, got the scoring started in the 13th minute.

After being fouled hard running down the left side of the field, the Harvard senior set up and unleashed a line-drive free kick off the Northeastern wall and towards the far side of the goal. Senior Huskies goalie Nathalie Nidetch was unable to react to the deflection in time and the resulting tally gave Mohammadi her team-leading fourth goal of the season.

With a 1-0 lead in hand, the Crimson kept digging. As Hamblin noted, one thing that the squad worked on throughout the week was keeping the intensity up after they gained a lead.

“We were 1-0 up against Providence last week and played really well in the first half,” Hamblin said. “Then in the second half, they came out and really came at us, and we weren’t able to manage that. So we talked a lot about it this week—how do we manage the pressure? How do you manage being up? Keep attacking them, keep attacking them, instead of holding onto it.”

Almost immediately after Mohammadi’s strike, Harvard was back at it again.

Freshman midfielder Taylor Nielsen found sophomore forward Murphy Agnew with a deep outlet pass a minute later, and Agnew danced around the Northeastern backline, waiting for an opportunity to arise. That chance showed up in the form of Hirst, who snuck into the box whilst staying onside. Agnew threaded a perfect pass to Hirst, who finished past the outstretched arms of Nidetch to give the Crimson a 2-0 lead in the fourteenth minute.

“That’s what our focus really was on today, treating it like an Ivy League game, coming out, getting some first half goals and then extending that to the second half, ” Mohammadi said. “At the end of the first half, we had a little bit of a lull in our momentum, but we did a good job of possessing the second half and bringing the momentum back to our side.”

Both sides continued to play hard and fast for the remainder of the 90 minutes, but the early flurry proved to be all the scoring either side would manage.

“[Northeastern] swung momentum their way a little bit towards the end of the first half, beginning of the second half,” Hamblin said. “And I’m really proud of the resolve we showed just to defend well, make good choices, and manage the game well.”

Harvard’s defense stood strong in allowing the 2-0 lead to stand.

Senior goalie Danielle Etzel and junior goalie Kat Hess split time between the posts to keep Northeastern off the board, combining to record Harvard’s third shutout of the season. Both netminders took hits in the box but still achieved the end result—keeping the ball out of the net. Etzel’s 45 scoreless minutes, meanwhile, extended her scoreless streak to 356 minutes.

“The goalies have both been incredible,” Mohammadi said. “They’re competing with each other, and I think that they’re constantly pushing each other to be better.”

The Crimson and Huskies, despite the one-sided scoreline, matched up evenly in the box score.

Harvard took eight shots to Northeastern’s nine and forced the Huskies’ goalie into three saves. The Crimson made four saves—two credited to Hess, one to Etzel, and one to the Harvard team as a scramble in front of the net resulted in a cleared ball.

Hirst’s goal was her third of the season, while Nielsen and Agnew got their second and third assists of the season. The rookie class has been a vital cog in the Crimson engine—five of the team’s nine goals have been scored by freshmen.

“We grew up today, I think we really grew up today,” Hamblin said. “As a young team, we’ve made some mistakes, where experience would allow us to be able to navigate those situations, but today, we did a lot of the right things.”

It won’t always be perfect. Striving to be perfect can even hold you back. Harvard will now look to carry that tooth-and-nail experience into the rest of the season.