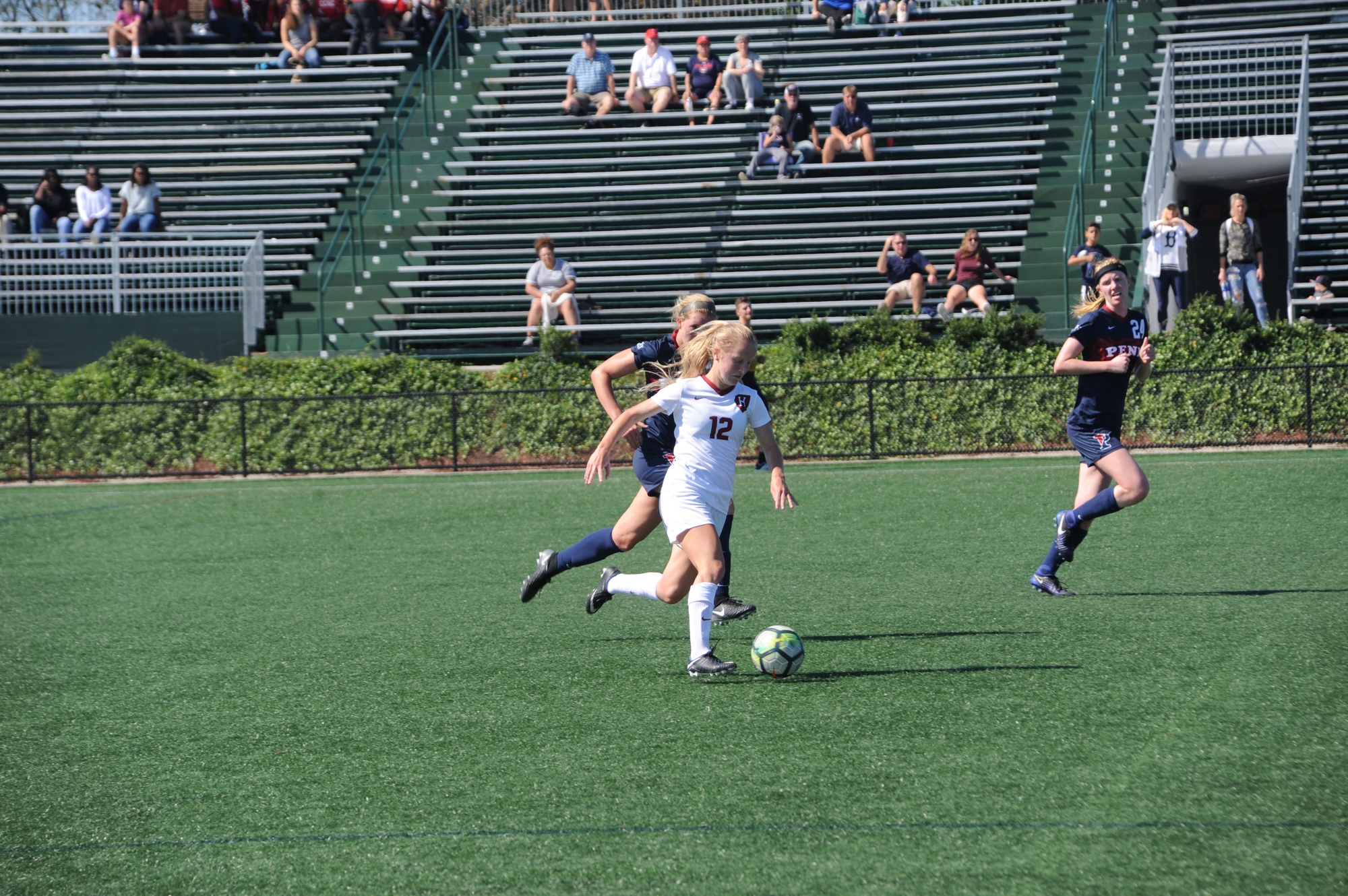 Sophomore forward Murphy Agnew's effort to draw a penalty at the outset of the second half against Syracuse kickstarted the Crimson offense, which went on to net four goals. By Matthew W DeShaw
By Bryan Hu, Crimson Staff Writer

After dropping two games to West Coast teams to open the season, the Crimson responded by blowing out Syracuse, scoring four goals for the first time since 2015.

The past two iterations of the Harvard squad have been defined by  staunch defense, characterized by star goalkeeping and the synergy of its core defenders, more so than by its ability to score.

For one, the Crimson graduated four key defensive specialists last season. For another, Harvard brought in no fewer than 10 rookies this summer, several on the offensive side of the ball—and all of whom can make an impact.

“Every time you come into preseason, you have a new team,” said head coach Chris Hamblin, entering his third year at the helm of the program. “And you’ve got to formulate that identity. We obviously lost a lot, some special players, but we’ve also brought in some special players. We’re a new team this year, and this is the first time we’ve really shown who we can actually be, so we’ve just got to build on this now.”

Down in the Bay Area to open the season before returning to Jordan Field for its home opener last Thursday, the new-look Harvard team was on full display as it prepares for the grind towards Ivy League play in late September.

The Crimson (1-2) was dispatched of by Cal, 2-0, and San Francisco, 2-1, last weekend, but put a stamp on its home field with a defiant 4-0 victory over Syracuse in its first home tilt.

Last Saturday, on a day when upperclassmen started moving into Harvard dorms, the Crimson faithful watched as their team quickly turned a 0-0 halftime tie at Jordan Field into a comfortable 4-0 decision over the visiting Orange (2-2).

Harvard seemed to gain confidence as the game went on. After a shaky start that witnessed both sides go back and forth, the Crimson first gained more control over the time of possession split, then inched closer with a couple of chances by junior midfielder Meg Tveit and reigning Ivy League Rookie of the Year Murphy Agnew in the first half.

It wasn’t until Agnew drew a yellow card to start the second half that Harvard drew blood. Freshman midfielder/forward Sophie Hirst stepped in to take the penalty and sunk the shot inside the right post for a 1-0 lead in the 52nd minute.

The Crimson kept digging, however, getting goals from another rookie, forward Trinity Thomas, and offensive mainstay senior Leah Mohammadi in the 64th and 69th minutes to expand its lead to 3-0. Freshman midfielder Taylor Nielsen capped it off with a superb floater from outside the box in the 75th to close the scoring at 4-0.

“Honestly, it’s kind of a blur right now,” Nielsen said after the game. “I just remember it was coming back…. I’ve always been one to take the longer shots, playing mid, and I saw that it was an open space, and it was a perfectly weighted ball back, so I went for it and it floated in.”

Unable to come up with a response, Syracuse only lightly tested senior goalkeeper Danielle Etzel, dotting the Harvard net with six shots-on-goal that the veteran Crimson netminder easily handled. Etzel played all 90 minutes for her third career individual shutout and first win of the 2018 season.

The goals were career firsts for Hirst, Thomas, and Nielsen, with Nielsen also assisting on Thomas’ score. Mohammadi’s penalty shot gave the senior her second goal of the season.

“I think today, [our starting group] really connected,” Nielsen said. “Once we fought through the flow of the game, especially after the first half and the first goal, that’s when we finally settled down and played our game.”

Mohammadi scored Harvard’s first goal of 2018 in the 86th minute of last Saturday’s matchup against USF, but it wasn’t enough to overcome a 2-0 deficit as the Dons (4-1) defeated the Crimson, 2-1 at Negoesco Field.

The loss illustrated the struggles that Harvard has historically had when attempting to rally. Dating back to the start of the 2017 season, the Crimson is now 0-10 when its opponents score first, highlighting the importance of being able to play downhill soccer.

San Francisco junior forward Izzie Lueken got the Dons on the board in the fifth minute of the game off a cross from junior forward Miciah Madison. The 1-0 scoreline held up until the the 74th minute, when USF extended its lead to 2-0 on touch-and-go play in the box.

“I’m proud of how we competed today,” Hamblin said last week. “Obviously, we’re not happy to take the loss, but we showed a lot of positives today, shook off some rust. Getting the chance to figure some things out, I like how we adjusted as the game went on.”

Mohammadi’s header during a scramble in front of the net with fewer than five minutes to play got the Crimson on the board for the first time in 2018, but the Dons were able to close out the visitors for a 2-1 victory.

Just a thirty-minute drive from Negoesco Field, Harvard kicked off its 2018 campaign with a visit to Edwards Stadium in Berkeley, Cal. The affair proved too much for the Crimson, as the Golden Bears notched their 18th consecutive home win in non-conference play with a 2-0 victory.

Mohammadi tallied Harvard’s only shot-on-goal and Hess was able to win a one-on-one battle in the 52nd minute, but that was just about all the Crimson was able to manage.

Cal senior forward Miranda Nile’s penalty goal in the 14th minute proved to be the winner, and sophomore forward Emma Westin tacked on insurance in the 68th minute.

The matchup marked the collegiate debuts of Harvard rookie defenders Jillian Wachira and Courtney Rabb, as well as Nielsen and Thomas.

“We have a lot of freshman who have come into the team, fit right into our system and our culture, and are ready to contribute,” Hamblin said. “You saw that today, with Jillian, Taylor, Trinity, [and] Courtney all getting their first taste of play at the collegiate level. And I think they performed very well, especially Jillian helping anchor our back line. We have things to work on as we would expect, but overall really pleased with the set of debuts we got today."