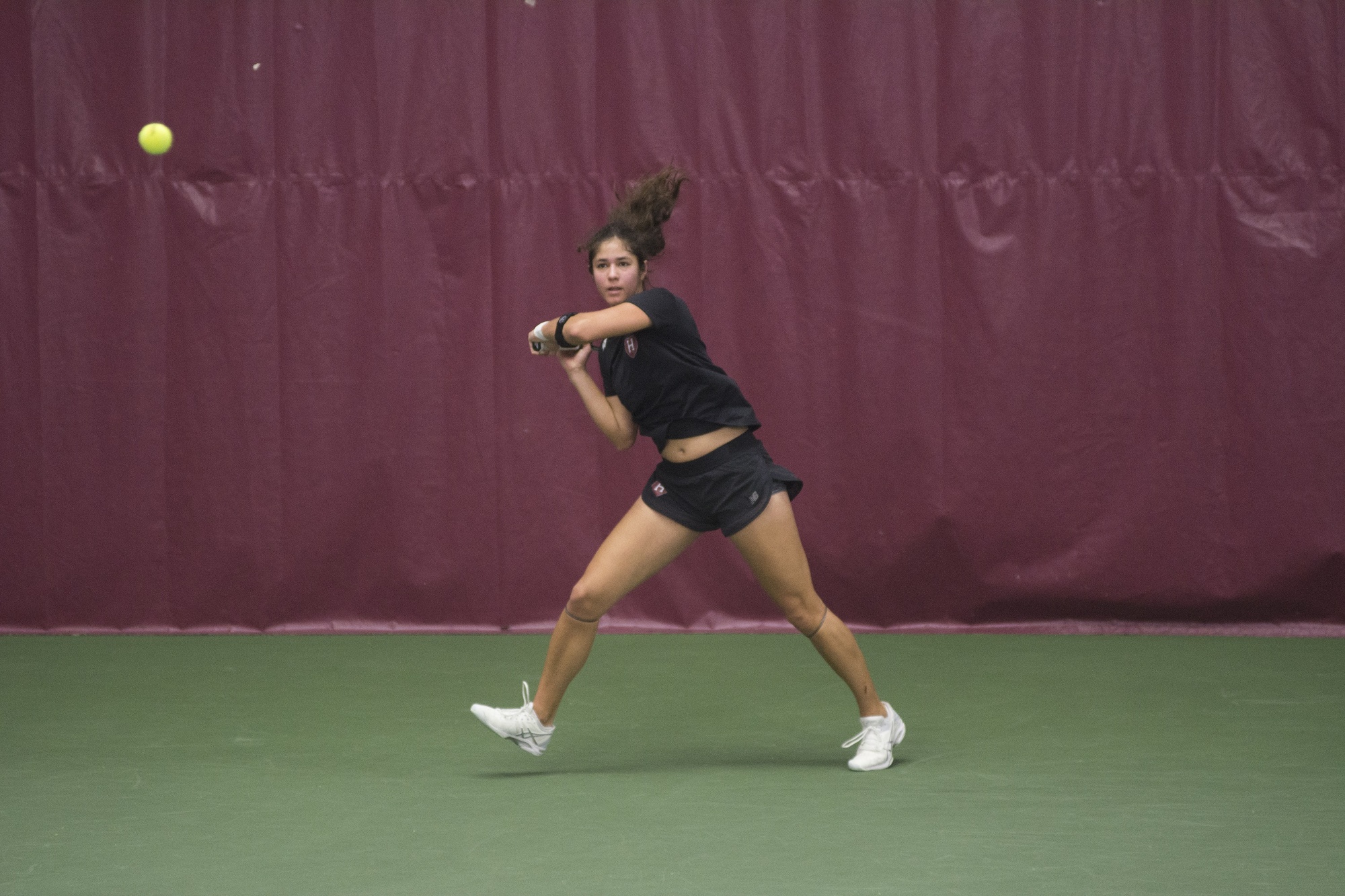 On the first day of the women’s appearance at the Dartmouth Invitational, the Crimson won all six of its contests. By Lu Shao
By Shuvom N. Sadhuka, Contributing Writer

Both Harvard tennis teams got off to promising starts to their seasons this past weekend, earning victories against conference and out-of-conference rivals. The men’s team submitted a strong performance at the Chowder Fest tournament, winning singles and doubles matches against Old Dominion, Indiana, and Texas Tech. The women’s team traveled to the Dartmouth and Columbia Invitationals, finishing with winning records at both and going nearly undefeated at Columbia.

For the men’s team, the 2018-19 season is one with some uncertainty, in large part due to the departure of head coach Dave Fish at the end of last season after he spent 42 years with the team and amassed 21 Ivy League titles. Taking Mead’s place as the new head coach is Andrew Rueb ’95, who most recently served as the assistant coach under Fish. As a player at Harvard, Rueb won Ivy League Player of the Year twice and captained the team in his final season.

However, the team has plenty to build off from last year, especially under senior captain Andy Zhou, who came into the weekend ranked No. 112 in the ITA Preseason Singles Rankings.

Zhou showcased his abilities at Chowder Fest, sweeping opponents from Old Dominion, Indiana, and Texas Tech 3-0 in singles Flight 2. Freshman Brian Shi and junior Logan Weber also impressed in their doubles debut together, going undefeated on the weekend, including an impressive 7-6 tiebreaker over Texas Tech’s duo of Parker Wynn and Bjorn Thompson. Other notable Harvard performers included senior Andrew Ball and freshman Harris Walker, both of whom went 2-1 in singles.

The women’s team sent squads to Columbia and Dartmouth to open the season. At Columbia, Harvard won five singles matches and four doubles contests. The Crimson certainly has plenty of future potential in its younger ranks, as freshmen Rachel Lim and Chelsea Williams both put forth stellar debuts. Williams, who came into Harvard as a five-star recruit, won a three-set match over Mika Genkova from St. John’s University. Lim won both two matches in her singles draw before teaming up with fellow freshman Annika Bassey to split a pair of doubles matches. Williams was paired with Clemence Krug of LIU-Brooklyn to defeat a Hofstra duo, 8-1.

The tournament at Dartmouth was a particularly strong one for the Crimson, as Harvard’s team prevailed in all six matches on the first day before losing just two matches the rest of the way. The Crimson also swept the Big Green in doubles play, winning four out of four matches. Perhaps most impressive was freshman Rachel Eason, who went undefeated on the weekend, defeating Dartmouth’s Allison Chuang, 6-0, 6-2 and Madison Hwang, 6-1, 6-2. She also worked with junior Natasha Gonzalez to defeat Dartmouth’s duos of Jasmini Abidi and Chuyang Guan and Nina Paripovic and Nicole Conrad, 8-4 and 8-3, respectively.

Both teams have tough schedules ahead of them — the men’s team will be at home for the Ivy Plus tournament against Princeton and Yale this weekend, the women’s team off to California for the Oracle ITA Masters — but if this opening weekend was any indication, Crimson tennis is poised to see a great deal of success on both the women’s and men’s sides during the 2018-2019 season.