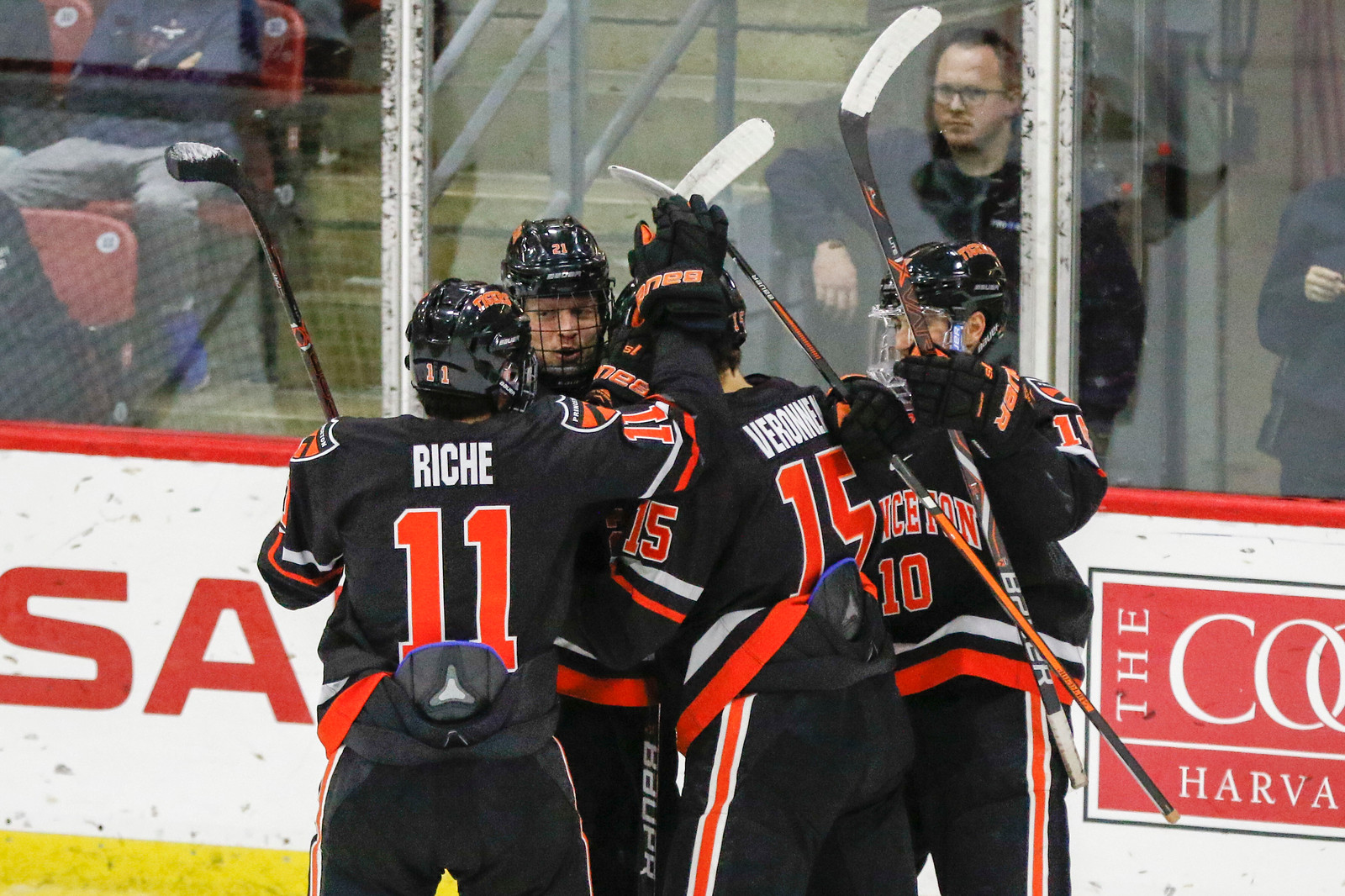 PRINCETON, N.J. — One minute into the third period, and just seven seconds into a Princeton man advantage, senior forward Alex Riche golfed a loose puck past Harvard net-minder Michael Lackey. The puck had rebounded into the slot, idling at the feet of Crimson freshman Jack Drury where it was waiting to be whacked in.

Riche’s fifth tally of the season proved to be the game-winner on Friday night at the Hobey Baker Rink. The Tigers (6-10-2, 4-6-1 ECAC), who added an empty-net goal in the waning minutes, overcame the Crimson (6-5-3, 3-4-2) by a final mark of 4-2, taking the season series against Harvard with their first win against the Ivy League rival since 2013.

“We gave up goals too easily,” Crimson coach Ted Donato ’91 said. “We took some penalties, to me, that weren’t necessary…. Really, that was the difference in the game. They get the two powerplay goals.”

Although the teams entered the first intermission notched at 1-1, the stalemate did not last long. One minute into the middle frame, Princeton forward Liam Grande broke into the zone and shoved a backhanded shot into the pads of Lackey. While Lackey kept out the initial chance, Grande’s linemate, sophomore Luke Keenan, crashed the net and punched home the rebound for another early-period strike.

“[Early-period goals] are daggers,” co-captain Michael Floodstrand said. “You have to really learn to keep a level head when those things happen. Those are things that we have to tighten up on. We had a great shift there in the first minute of the second, and they get a fortunate bounce.”

Just as in the first stanza, though, the teams traded scores in the second period. Twelve seconds into a Harvard powerplay, junior defenseman Adam Fox sent a one-timer from the point toward the net, where it beat Princeton goaltender Ryan Ferland. Fox, a prolific offensive blue-liner, sits second in the nation in points per game (1.57). 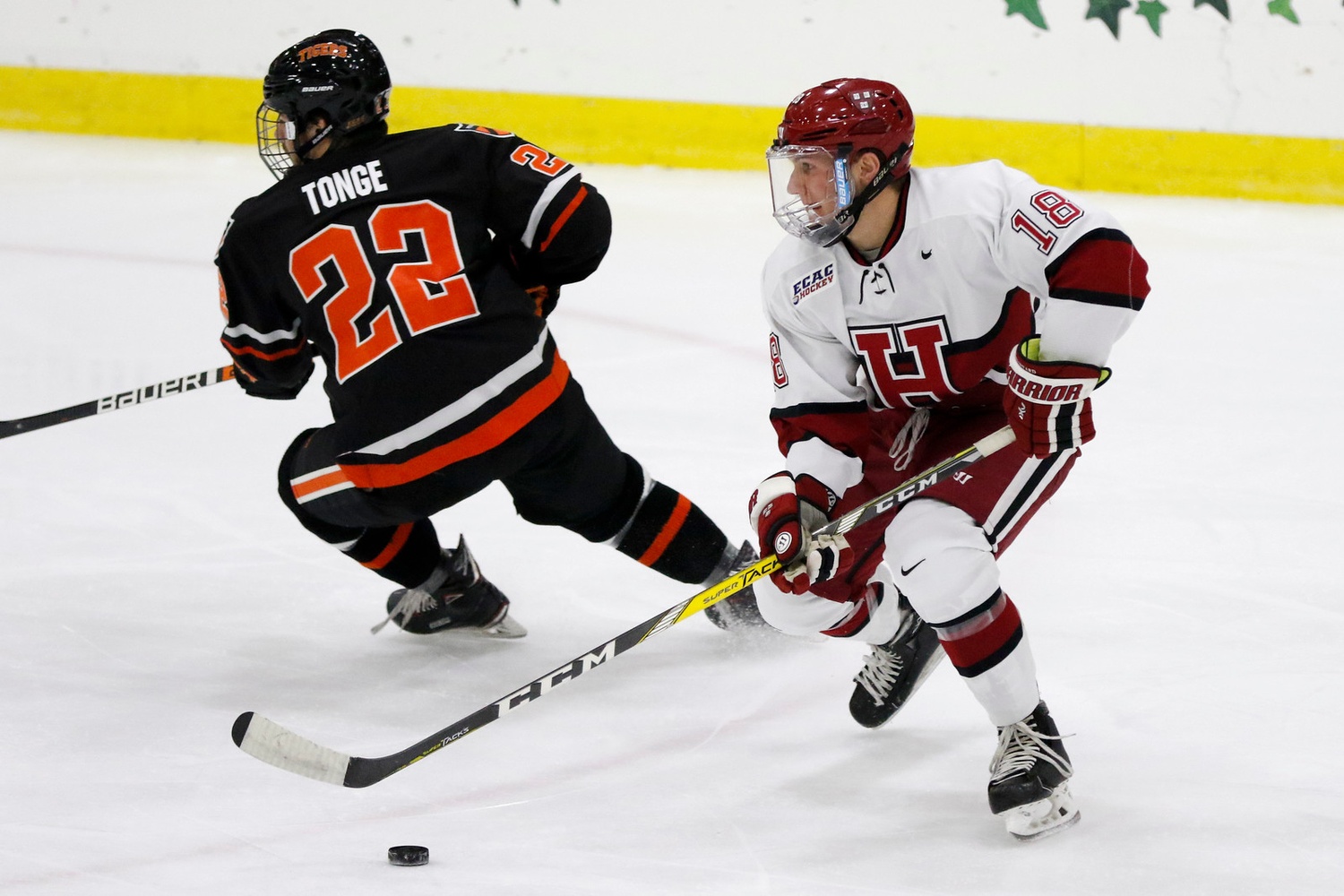 Through 14 contests in 2018-2019, the Crimson has struck on the powerplay in all but three tilts. After a one-for-four performance, Harvard’s lethal man-up unit continues to lead the NCAA in effectiveness (35.2%).

“The powerplay has been huge for us all year,” Floodstrand said. “We’ve got so much talent on there…. They’ve done a hell of a job the entire year.”

The Crimson opened the scoring for the eighth time this season. Five minutes into the tilt, Drury won an offensive draw, giving linemate Frédéric Grégoire a lane to shoot through traffic. The junior’s wrister made it through the noise in front of Ferland and found twine.

“It’s one of a bunch of faceoff plays,” coach Donato said. “They all look good when you win the draw clean like that, so good shot by Freddie [Grégoire], nice faceoff win by Drury.”

Just over two minutes later, the Tigers erased the early Harvard lead after a Derek Topatigh slapshot from the point beat the left pad of Lackey.

When the two teams met for the first time this season — a 4-4 tie in early November — Princeton’s star wingers, Ryan Kuffner (13–13—26) and Max Véronneau (7–17—24), left their mark on the contest. The senior alternate captains combined for seven points and proved deadly on the man advantage.

Friday night, the Crimson kept the Tigers’ two offensive workhorses in check, relatively speaking. Kuffner and Véronneau, both pre-season All-ECAC selections, totaled just two points between them including Kuffner’s empty-net dagger with a minute remaining in the bout.

“First and foremost, if [shutting down Kuffner and Véronneau] is not a point of emphasis, we’d be fools,” coach Donato said. “They finished third and fourth in the country last year in points. I thought we did a better job of not giving them easy offense. Ultimately, though, if they had two-and-two tonight and we won 5-4, I’d be a lot happier.” 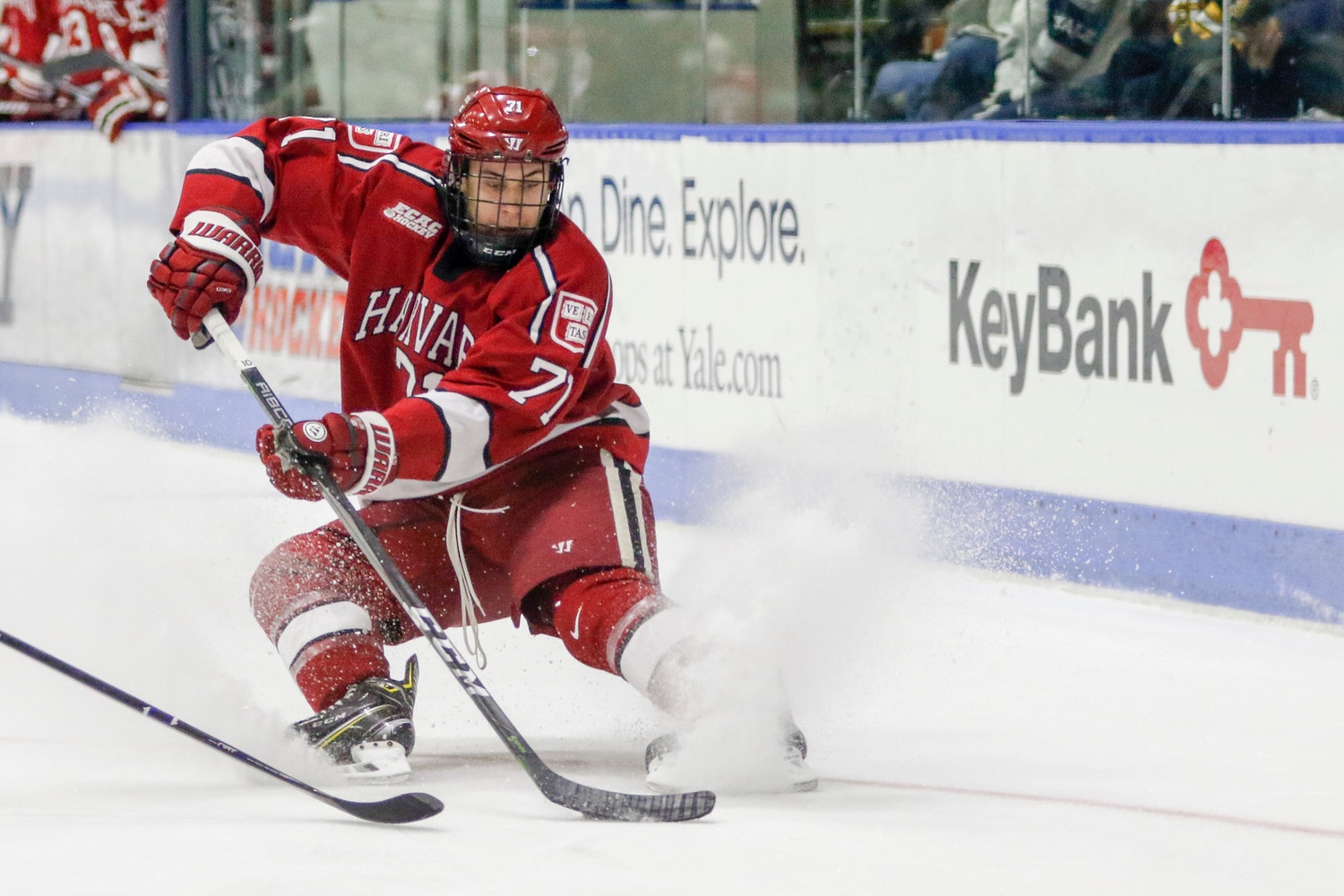 In the second half of the first period, Princeton had an opportunity to seize a 2-1 lead. With Lackey down and out, the net was all but empty for a Tigers forward ready to bury the puck. Harvard forward Justin Szeto, however, dove past the crease and thwarted the sure tally with an extra-effort play, keeping the score even at one.

Plays like Szeto’s kept the Crimson in the game, but the squad simply did not get the offensive production it needed to match Princeton.

“The biggest thing for us now is not to get frustrated,” Floodstrand said. “[Scoring] is going to come, without a doubt, but you have to tighten up other areas of your game for that stuff to come out.”

Harvard turns to No. 6 Quinnipiac on Saturday night in a crucial ECAC matchup and measuring-stick game.