After conceding a lead, the Crimson recovered to win two conference points 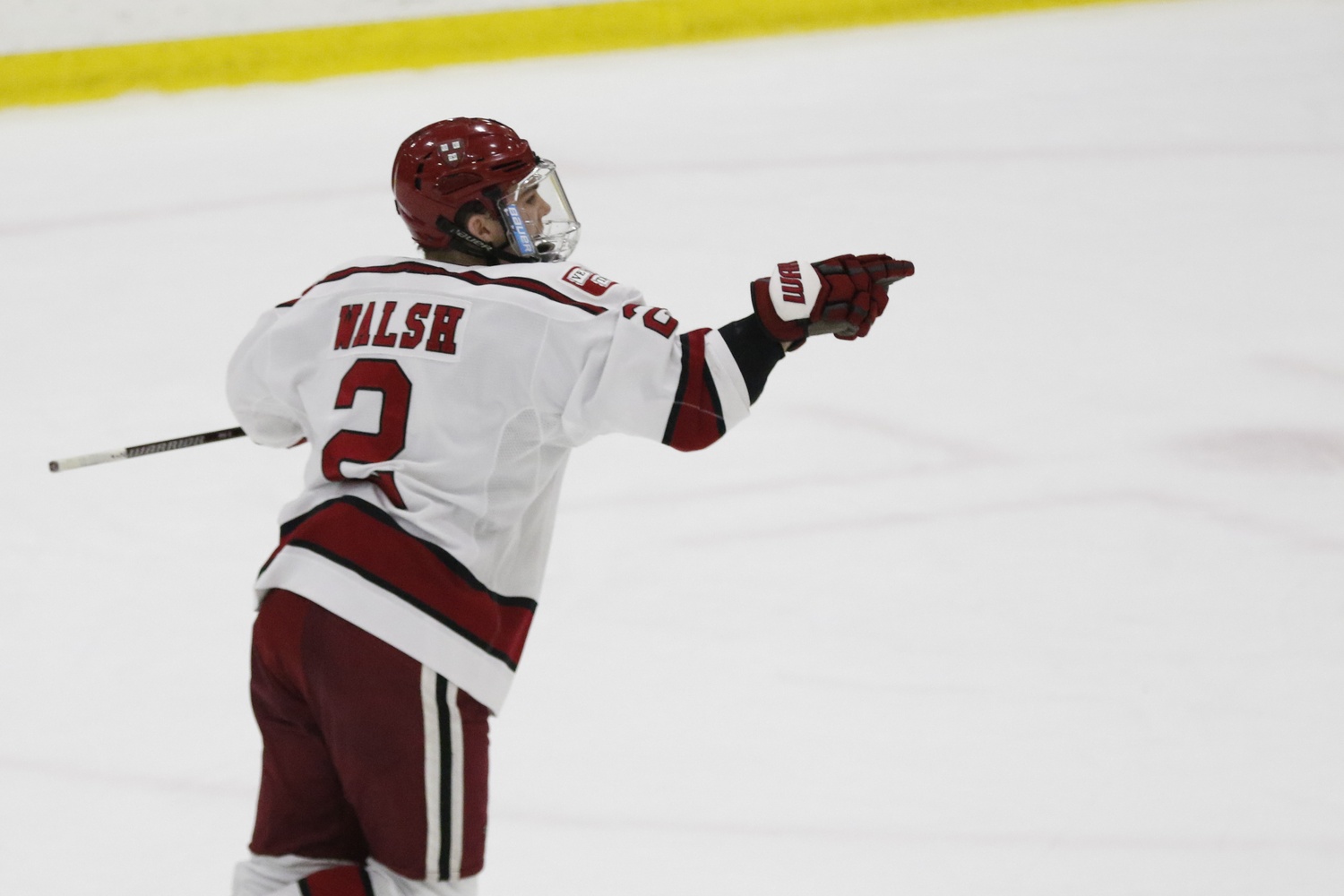 The Harvard men’s hockey team has a bad history with Clarkson and 3-1 leads. On Friday night, the Crimson found itself in that dangerous position again, having lost its lead and fighting in overtime for two points. This time, though, a set play boosted Harvard past the Golden Knights.

On an offensive zone draw two minutes into the extra frame, the Crimson called a timeout. The plan was simple: sophomore Jack Badini, the nation’s second-best faceoff man (67%), would win the draw back to his classmate, defenseman Reilly Walsh. Walsh would rip the shot to the far side of Clarkson junior net-minder Jake Kielly. And it happened exactly as they planned.

“It went perfectly,” Badini said. “Probably if I did that ten times, it would happen once or twice.”

A heartbeat after the puck was dropped on that last faceoff, Walsh’s OT winner helped Harvard (9-6-3, 8-5-2 ECAC) topple No. 10/9 Clarkson (16-7-0, 7-4-0), snapping the visitors’ eight-game winning streak. Sophomores shone on the scoresheet: all four goal-scorers for the Crimson were second-years. 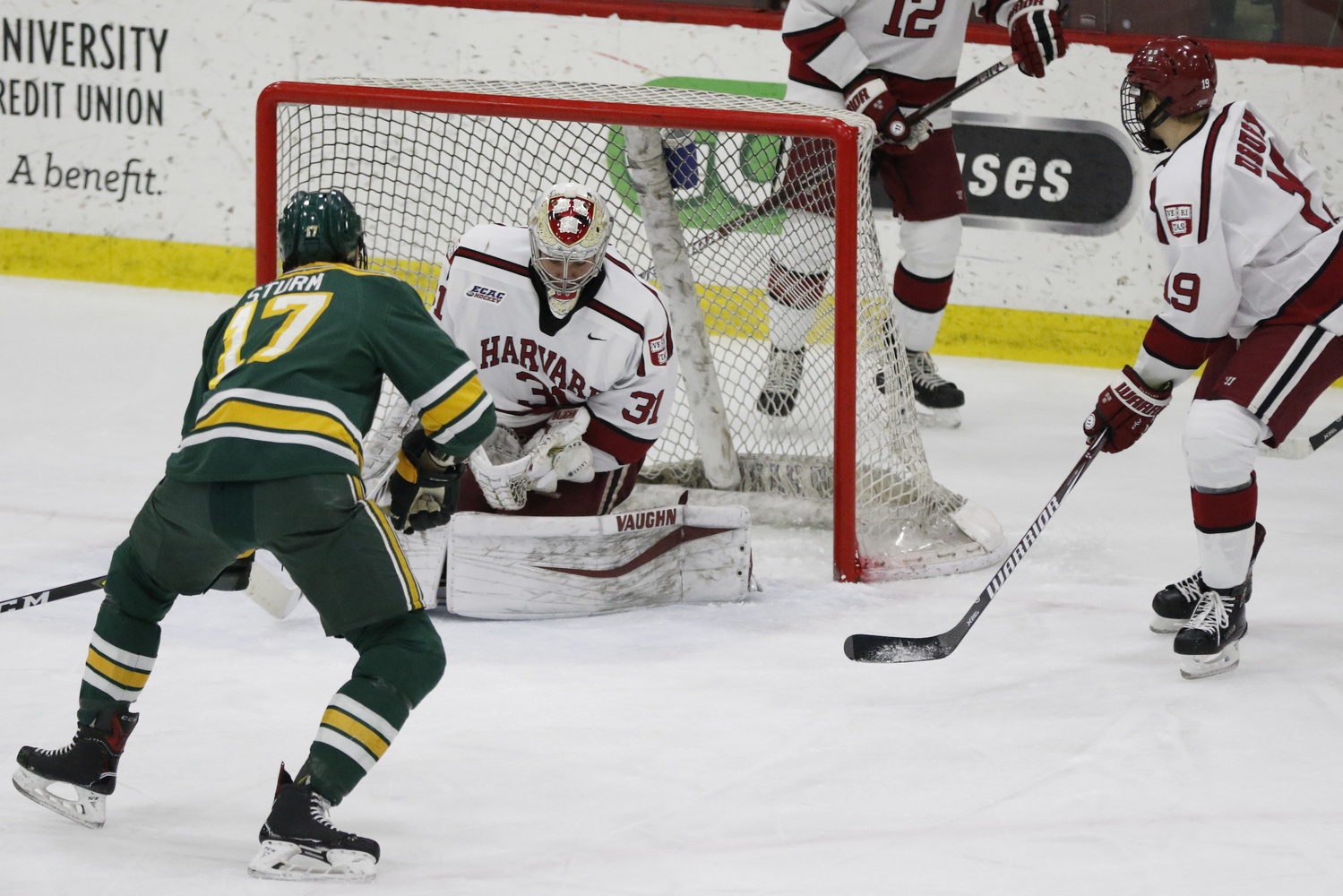 Nico Sturm has proven to be a thorn in the Crimson's side before. This time, however, Badini's goal cancelled out Sturm's before the first period had ended. By Timothy R. O'Meara

But the contest did not begin so favorably for the home side. Less than four minutes into the contest, Clarkson struck first. Junior co-captain Nico Sturm was positioned in front of Harvard senior goaltender Michael Lackey just in time to receive a feed from junior linemate Haralds Egle. His quick shot slipped through Lackey on his glove side.

In past games this season, the Crimson has faltered to start play and failed to recover from early setbacks. This was not one of those games. Instead of allowing the momentum to shift wholly in the Golden Knights’ favor, Harvard pressed on, outshooting Clarkson almost two to one in the first period. That pressure paid off late in the frame, as Badini beat Kielly with a backhand to knot the game at one.

“When you play good teams, you really just have to stay with it,” head coach Ted Donato said. “...Win or lose, I thought we did a lot of good things.” 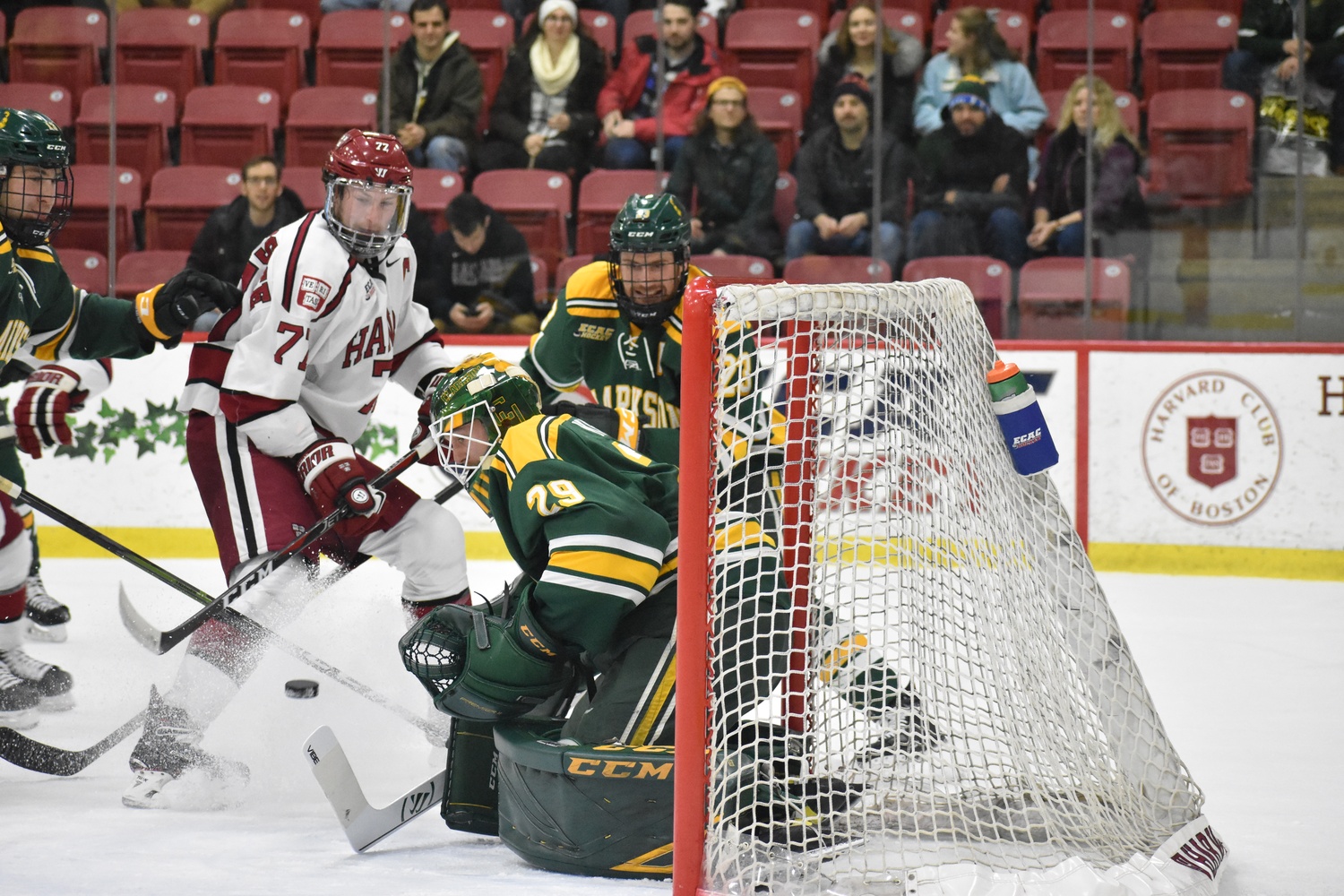 Clarkson net-minder Jake Kielly faced 41 shots in 62 minutes of play, turning away 37 of them. By Amanda M. DiMartini

The Crimson was in turn outshot 6-14 in the second period, but the team put up two unanswered goals. The first of those came, again, from Badini on the rush, on a feed from junior forward Nathan Krusko. The second came after a strong effort from co-captain Michael Floodstrand, who forced a turnover and fed sophomore Henry Bowlby at the right circle. Though the Golden Knights had their chances, momentum seemed to be going Harvard’s way.

“I thought we played well in the third period,” coach Donato said. “We gave up a couple chances, a couple bounces end up in our net. But that’s what good teams do to you.”

Clarkson arrived with a response in the third period. Rookies Josh Dunne and Anthony Callin each tallied a goal for the visitors, and in six minutes of regulation with the score tied, neither team could pull ahead. Particularly disappointing for the Crimson was the fact that the tying goal ricocheted off a defender’s stick — Walsh’s stick. But Walsh found redemption with his own tally, and Harvard emerged from the night with two points. 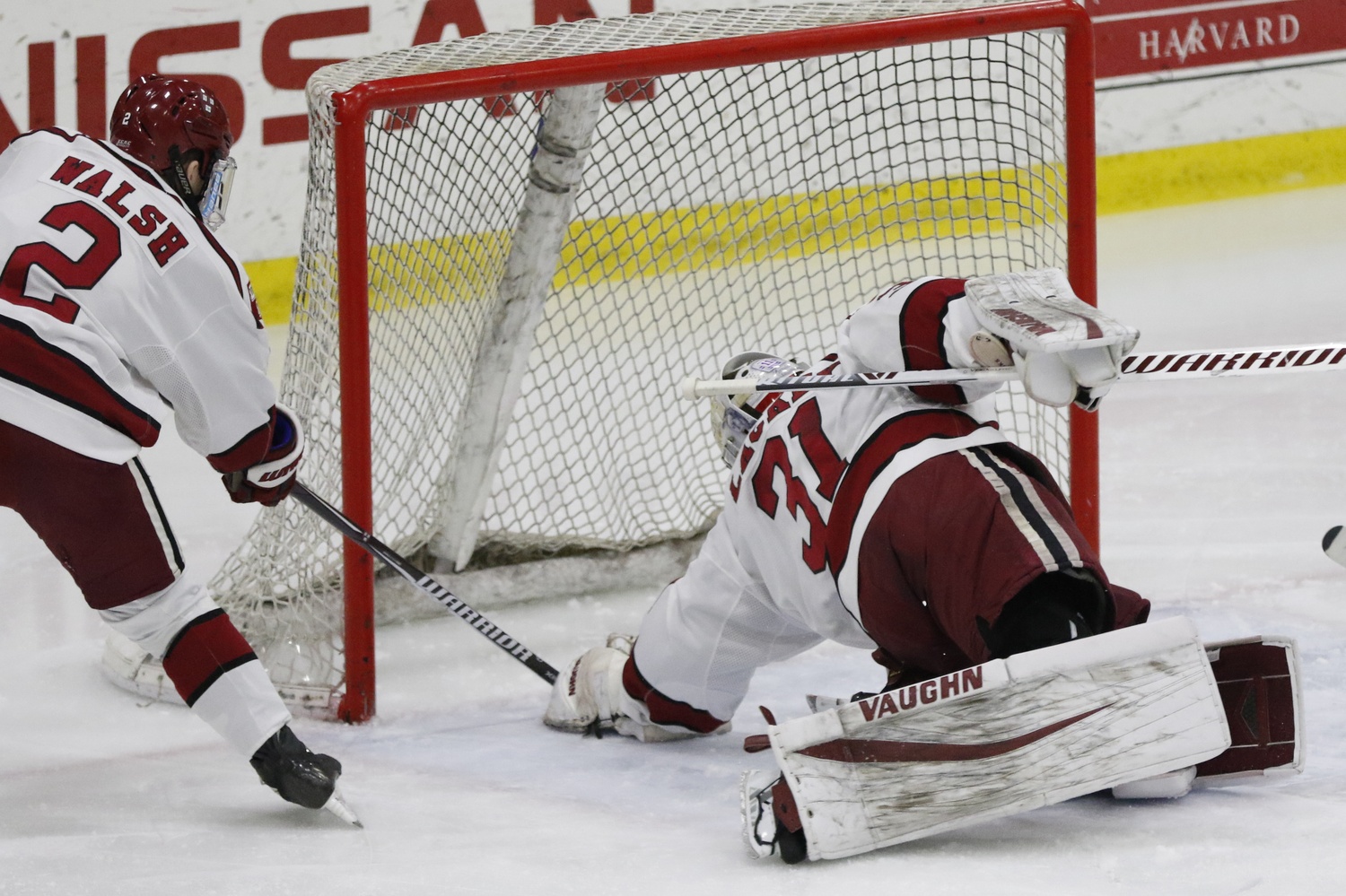 Michael Lackey has proven to be an effective, reliable backstop this season, and has maintained a .936 save percentage over January's slate of games. By Timothy R. O'Meara

Interestingly, the whole game was played without a single penalty being called — a factor that might have changed the contest, considering Harvard’s NCAA-best power play. The shoot-first mentality and quick pace the team kept up during the game, however, served it well despite the lack of special teams. Three Crimson players had five shots to their name: Badini, rookie defenseman Jack Rathbone, and junior defenseman Adam Fox. At the other end of the ice, Lackey’s .903 save percentage goes against his fairly consistent recent successes. But the net-minder did not look shaky, despite the numbers.

A fruitful offense is crucial as Harvard comes upon the next milestone of the season. The Beanpot is fast approaching, and while the Crimson has tested itself against BU, its other crosstown rivals pose different challenges. In terms of ECAC play, the table is tighter than ever: only three points separate sixth-place Harvard from Cornell at the top of the table. Upcoming matchups against St. Lawrence, Dartmouth, and No. 16 Union will make all the difference to the Crimson’s seeding hopes.