The 156th installment of the crosstown rivalry concluded without a decisive result.
By Spencer R. Morris 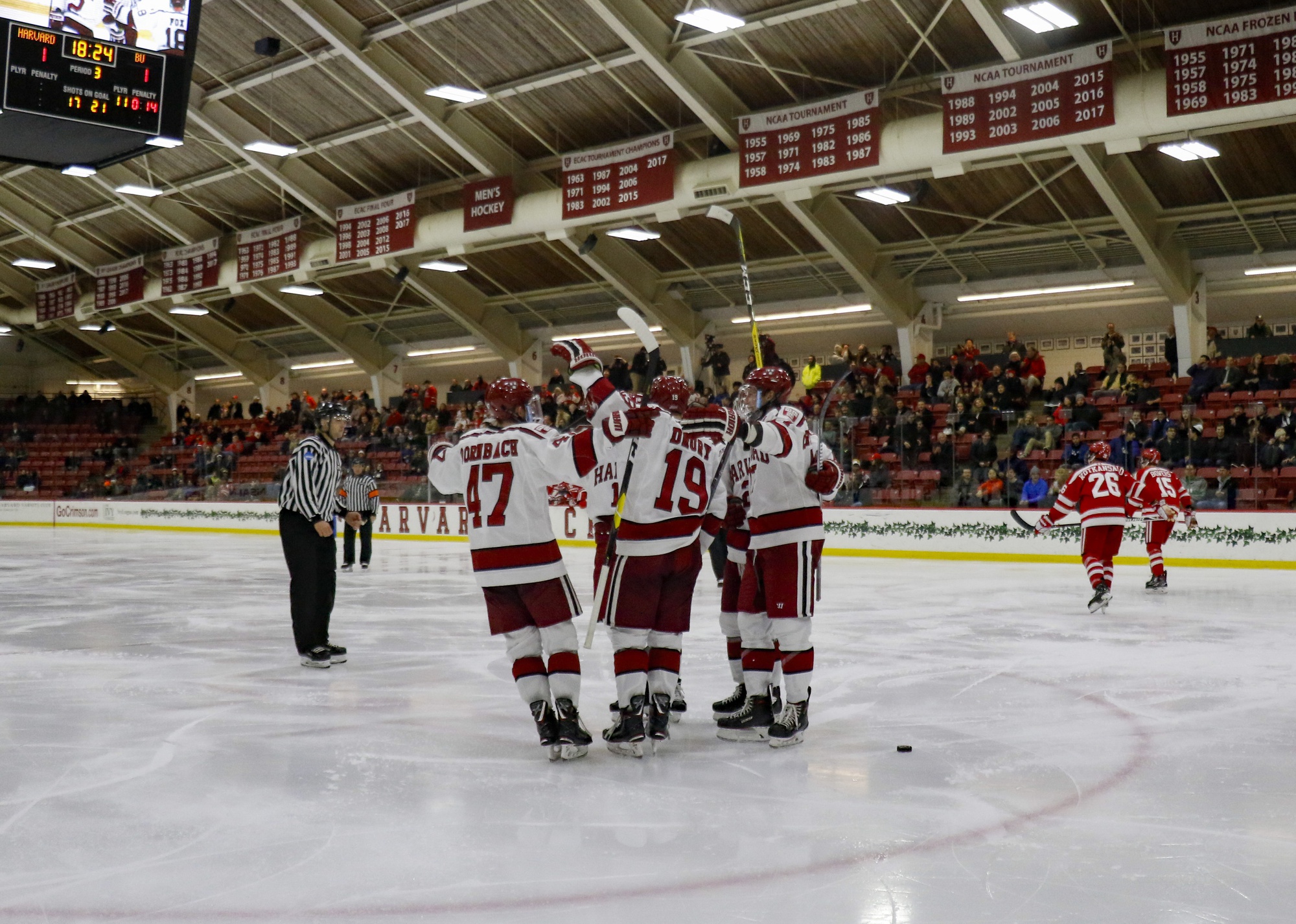 Headed into Tuesday’s matchup, the Harvard men’s hockey team and Boston University had been forced to overtime in three of their last six meetings, including the Terriers’ emotional double-overtime victory in last year’s Beanpot semifinal.

The mid-week tilt at the Bright-Landry Hockey Center added yet another chapter of extra hockey to the Harvard-BU rivalry, with the teams arriving at a 2-2 stalemate after 65 minutes.

“Although we’re never happy not getting two points at home, I thought…it was a really good college hockey game and…we did some things better than we’ve been doing them,” Crimson coach Ted Donato ’91 said. “All in all, we had some chances to maybe get the win. I’m sure they feel they had some…. The result was probably what it should be.”

Thanks to a late-second-period equalizer from Harvard (6-4-3, 3-3-2 ECAC), the teams entered the final frame knotted at one. The Crimson began the period on the man advantage and finally cashed in 5-on-4 after failing to do so on its first two chances of the game.

Freshman forward Casey Dornbach fired a shot from the circle to the left of BU goaltender Jake Oettinger. The puck ricocheted off classmate Jack Drury and bounced into the slot, where co-captain Lewis Zerter-Gossage punched it home.

The powerplay tally continues Harvard’s man-up hot streak. The extra-man unit, which leads the nation in effectiveness (36.0%), has potted at least one goal in all but three games this season and, on four occasions, has converted multiple times.

Even prior to his secondary assist on the Zerter-Gossage goal, Dornbach paced the NCAA in powerplay assists per game. Tuesday night’s performance elevated his nation-best number to 0.77. Dornbach’s apple also thrust him ahead of teammate Adam Fox for the highest assist-per-game mark in college hockey (1.23).

“Casey is a heck of a player. He’s had a great start so far,” coach Donato said. “Offensively, he’s really stepped right in and been very dynamic. [He’s] a key part of the powerplay, has helped us five-on-five, and his speed and skill…have been a big part of our offense.”

The Crimson did not hold its 2-1 lead for long, however. Four minutes after the go-ahead goal from the home team’s co-captain, BU freshman Joel Farabee beat Harvard net-minder Michael Lackey with a wrist shot.

The snipe notched the score at 2-2 and set the stage for an emotional overtime game-winner. Alas, neither team would find the back of the net in the additional five minutes

“Any time it’s an out-of-conference opponent, you really want to bear down and get those points,” Zerter-Gossage said. “We felt like we dictated the play a lot, especially in the third.” 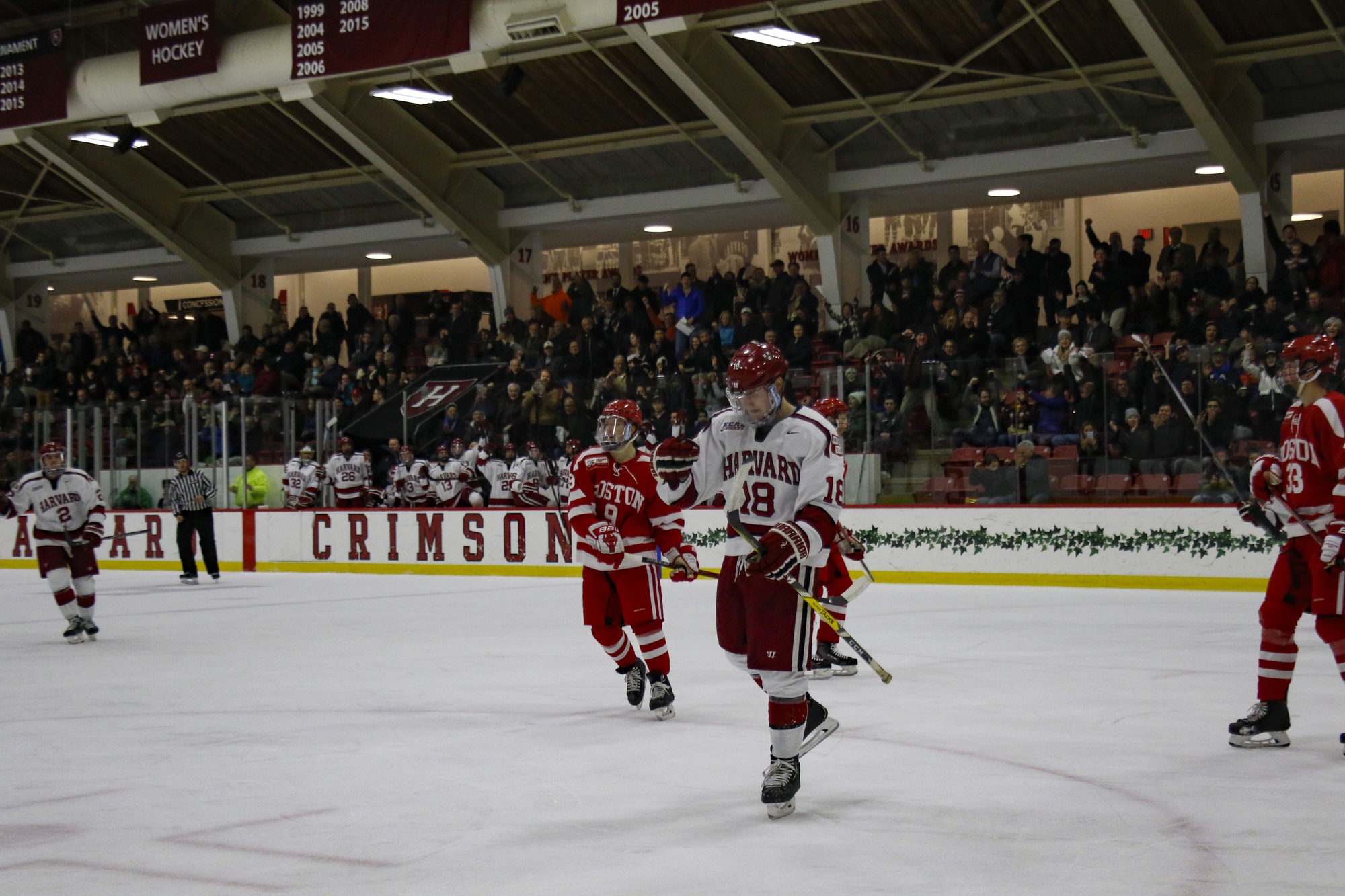 Harvard's elite offensive defenseman, Adam Fox, returned his name to its usual place — the scoresheet — on Tuesday night. Fox opened the scoring for the Crimson with a wrist shot from the slot. By Courtesy of Conner Grant/Harvard Athletics

With three minutes remaining in the middle stanza, Fox evened the score after Harvard trailed for the better part of two periods. The junior blue-liner handled a pass from sophomore forward Jack Badini and wasted no time ripping a wrist shot over the right pad of Oettinger.

With the goal, Fox got back on the scoresheet after another pointless outing on Friday. Fox opened the campaign on a nine-game point streak (5–15—20) before failing to register a goal or assist in three consecutive showings. Tuesday, he returned to his usual scoring form.

“[Getting back on the scoresheet] is good. Obviously, it’s not something I try and think about too much going into games,” Fox said. “I wasn’t getting points, but we were getting wins, so it wasn’t really too big of a concern.”

“I think if you asked [BU coach] Albie [O’Connell], he would say the same thing: those guys are tired,” coach Donato said. “You play on that stage, for that many games, that much passion and that kind of emotional atmosphere and the travel…. Jack Drury is a warrior, and he was super excited to get back in the lineup, and just having him in there gives our group a boost.”

Harvard will embark on two formidable road weekends in the middle of January, visiting Princeton and No. 6 Quinnipiac before tripping to Upstate New York to battle No. 17 Cornell and Colgate. Having Drury back in the lineup will assist the squad in regaining its mounting momentum, which the month-long winter break halted.