Football Seeks to Avenge Past Losses to Cornell on Saturday 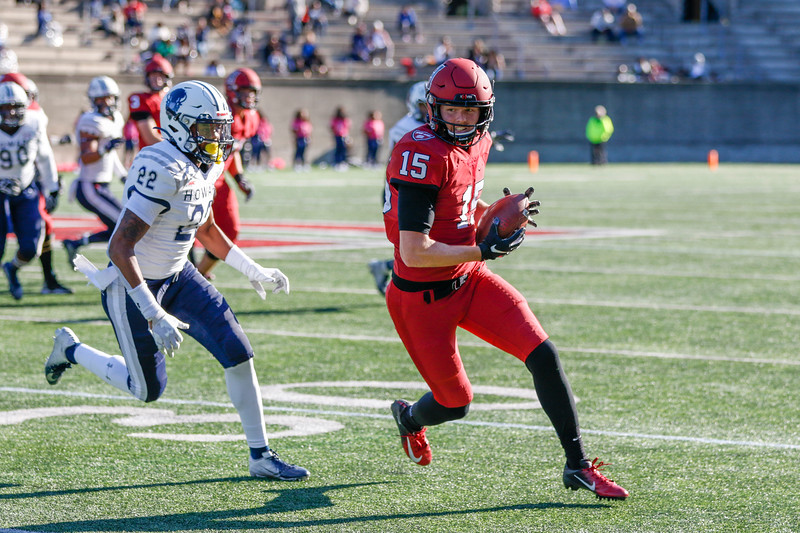 The Crimson are 2-1 heading into this weekend's bout with Cornell. By Timothy R. O'Meara
By Cade Palmer, Crimson Staff Writer

As the Crimson looks to battle Cornell under the midday sun in Harvard Stadium on Saturday, history will be against the Crimson for the first time in a while.

Two years ago, Harvard entered the 2017 rendition of the contest on the flip side, boasting an 11-game win streak against the then-home team Cornell. That year was worse for the Big Red than this one, with the team playing unremarkable, having yet to post a single victory in its three former games.

The Crimson took a quick 14-0 lead by the second quarter and then didn’t score again. Cornell did though, tabbing 17 straight to break the streak.

In 2018, Harvard was again forced to make the long, winding journey to Ithaca, N.Y., for the contest. The teams looked remarkably similar to the year before, and indistinguishable to this one.

Remembering the loss of last season, the Crimson took a quick lead, and maintained the difference up through the fourth quarter. With 10 minutes remaining, Harvard kept a 10-point buffer, 24-14, between itself and a repeat of the year before. As it turns out, 10 points wasn’t enough. Two quick Cornell touchdowns iced the game for the home team for the second consecutive year.

This season, the scene is much the same. The Crimson is 2-1 with an out-of-conference loss to a strong team, while the Big Red is 1-2 with a win against a weak win against Marist. For some reason, this hasn’t mattered in the past.

Cornell is unique in that over the past two seasons, it has served as the foil to the Ivy League title aspirations of Harvard. The team hasn’t even been particularly good both of the seasons it has beaten the Crimson. It finished fifth and seventh in 2017 and 2018, respectively. Yet, it still beats Harvard.

“I think we’ve definitely got a chip on our shoulder this week,” said captain defensive back Wes Ogsbury. “Some of the older guys that were here for both of the losses, we have a lot of resentment for Cornell and it’s really nothing against them. It’s just the fact that we feel we’re better every year but they’ve gotten the best of us the last two years. We’ve taken those losses as lessons and we’re preparing a different type of way so far.”

This season, the location and personnel have changed.

Saturday’s contest represents the end of a three-game home stint for the Crimson which has so far been fruitful, accounting for both of the team’s two victories thus far in the 2019 season.

At a more micro level, the duel looks similar to past years as well. By virtue of being division rivals, the two squads know each other well.

“They’re big, they’re strong, they’re very physical,” Harvard coach Tim Murphy said. “They play a lot of defense. Some teams are pretty basic and you know exactly what you’re going to get. Conversely, Cornell is going to give you, three-down, four-down, bear defense, and some stuff in between. It’s a lot to prepare for.”

The Big Red looks similar to past seasons. They average high 100s in both passing and rushing per game, they maintain possession for just over half the time. One stark difference is their effectiveness at fourth downs, which — being biased by the youth of the season — is 100 percent in five attempts. On third downs, however, the team is 10 percent less effective.

Harold Coles and Mike Cantanese will be familiar names for Crimson fans. The two lead the teams offensive production in the rushing department with the former averaging 111 yards per game. Cantanese serves as one of the team’s two quarterbacks, averaging 44 yards per game on the ground and another 121 through the air. Sharing the load behind the center is Richie Kenney. He’s averaging 78.67 yards through the air each game.

“This Cornell team, if you take a play off, if you miss an assignment, it can go big,” said junior defensive back Isaiah Wingfield. “It’s just really locking in on every single rep, trying to get better.”

The two-quarterback offense is a staple of Cornell’s. Last season Cantanese served as the secondary play caller, brought in every so often to run down Harvard’s throat — and doing so quite effectively. The now-senior tallied 75 yards and a touchdown against the Crimson last season.

The quarterbacks’ favorite target downfield isn’t even a wide out, its running back Delonte Harrell. The back has 135 yards and two touchdowns on the season.

Defensively, senior safety Jelani Taylor leads the squad in tackles, with 20, while defensive lineman Nathaniel Weber has the most sacks with two for 14 yards.

“It’s championship week everytime you come up against an Ivy League team,” Wingfield said. “You have to perform. If you lose one game in the Ivy League, now you’re depending on some other teams to lose and you want to be in the driver’s seat throughout the season.”

While the Big Red’s defense has had trouble making its way into the backfield, The Crimson’s has not. The team is first in the nation in sacks per game and second in the nation with tackles for loss per game with 4.67 and 9.7, respectively. Leading Harvard in that defensive front is sophomore linebacker Truman Jones with a team-leading 13 tackles and four sacks. The team is also second in the nation in first down defense, sixth in rushing defense, and first in punt blocks.

Offensively, the team is equally robust, having tallied its highest score since 2012, last week’s 62-17 routing of Howard put the Crimson on the national map for offensive production. The team is third in the nation in scoring offense, averaging 42.3 points per game.

At the helm of that production is quarterback Jake Smith. Through three games, Smith has thrown for 737 yards and eight touchdowns, with senior wideouts Jack Cook and Cody Chrest as his favorite targets. Junior Devin Darrington leads the production on the ground with 92.3 yards per game and four touchdowns overall.

“Losing a game to Cornell, two years in a row, that early in the season, it puts you on the ropes,” Wingfield said. “It’s been a rough way to start our season for the last two years. It’s stuck with us. We’re coming into this week with greater focus and intensity than we’ve ever had, one of the best weeks of practice we’ve ever had.”