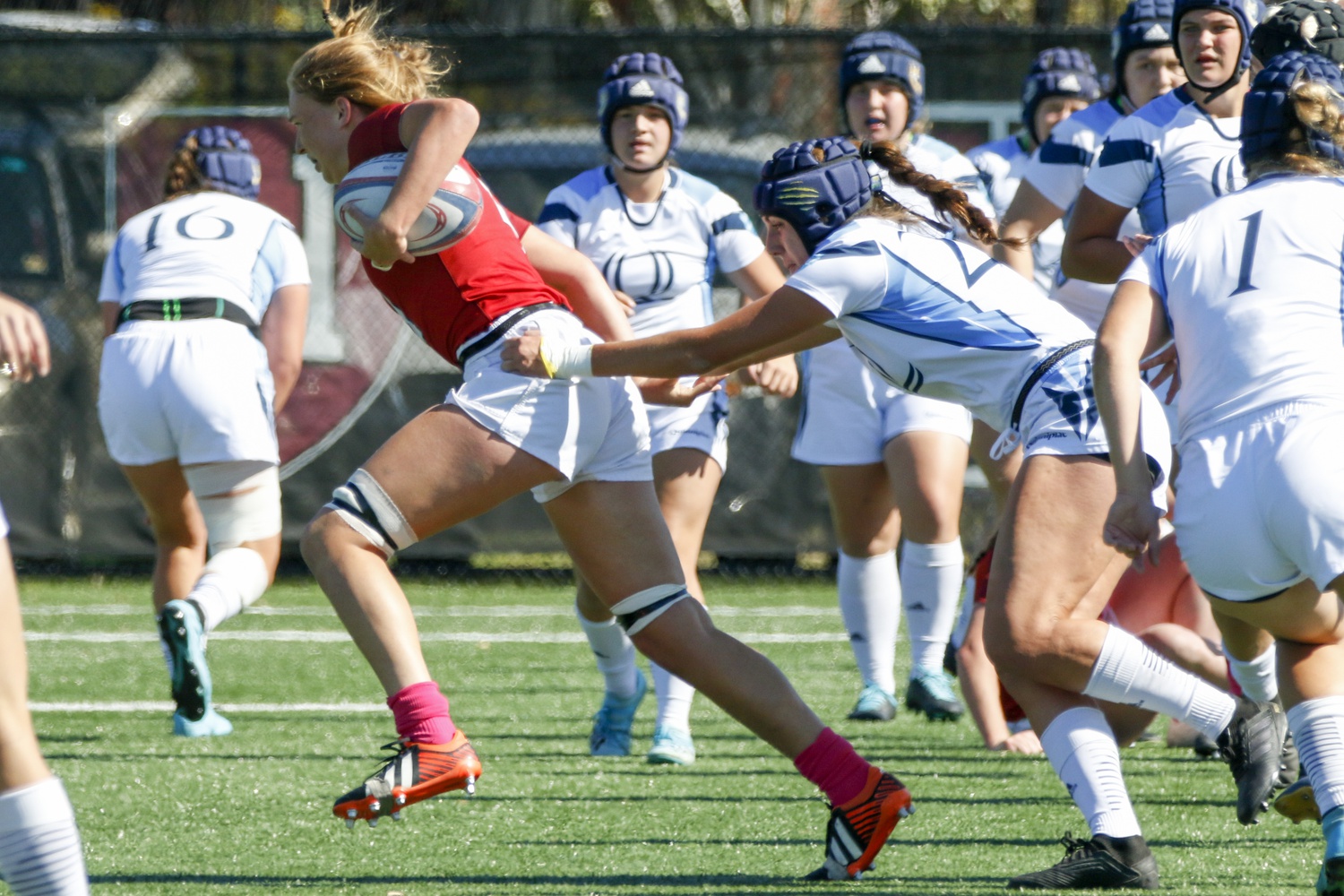 The Crimson offense was completely unstoppable this past weekend, putting up over 100 points. Meanwhile, the defense achieved its first shutout of the season. f By Timothy R. O'Meara
By Isabel A Levin, Contributing Writer

The Harvard women’s rugby team firmly defeated Notre Dame this past Saturday, finishing with a final score of 105-0. After defeating Dartmouth and Quinnipiac the past two weekends, this dominant win over the Falcons extends the Crimson’s winning streak to three games. The victory also marks the first time since Sept. 22, 2017 that Harvard has scored over 100 points, when the team beat Mt. St. Mary’s, 130-0.

Harvard (3-1, 1-0 in Ivy League) demonstrated its dominance early over Notre Dame College (0-3) and did not look back. Sophomore Emma Kearney scored the first try of the game in the opening minutes and the Crimson steadily continued to rack up points, leading 57-0 at halftime. Harvard continued to thrive in the second half as its next 48 points came in rapid succession. Junior Milan Roberts scored her first try of the season, just 20 seconds into the second half and Sophomore Sofie Fella mixed herself into the exciting action by contributing another try less than two minutes later.

“Everyone got on the field and everyone played really strongly,” said senior Captain Robyn Beese. “We just did a really good job of exploiting open space and working really well as a team, rather than individual players.”

Though the cold and windy weather created a difficult environment to play in, the Crimson persevered and maintained control of the game.

“There were definitely some moments where it was easy to get frustrated. We kind of had some dropped balls and little errors,” said Roberts. “But we were able to fix these errors throughout the game and just remain level-headed.”

Each player greatly contributed to help bring the team to a resounding victory. Twelve different players scored for Harvard, four of whom had a game high two tries. Roberts led the team with 20 points on two tries and five conversions and junior Erin Wright had her first try of the season.

A huge part of Harvard’s game plan was to give bench players a lot of playing time.

“What was really exciting was that we were able to get a lot of our reserves in and the level of play remained the same throughout the game,” said Roberts. “That was definitely a highlight for the team as we were really able to develop the team and see everyone play today.”

Harvard’s team contains eight first years, a program record, two of whom scored tries against Notre Dame. First-year Alex Pipkin scored her first career try in the first half to extend the Crimson’s lead to 45-0. First-year Brogan Mior, the team’s current point leader for the season, touched down for her first try of the game in the second half to bring the score to 77-0.

The team successfully worked as a unit, turning lengthy possessions into successful scores.

Harvard looks to continue this dominance in their final regular season game, which will take place at Brown on Saturday, Oct. 19 at 11 am. The Crimson will also host this year’s Ivy League championship against Dartmouth on Saturday, Oct. 26 at 11 am.