Crews Compete at Historic Head of the Charles Regatta 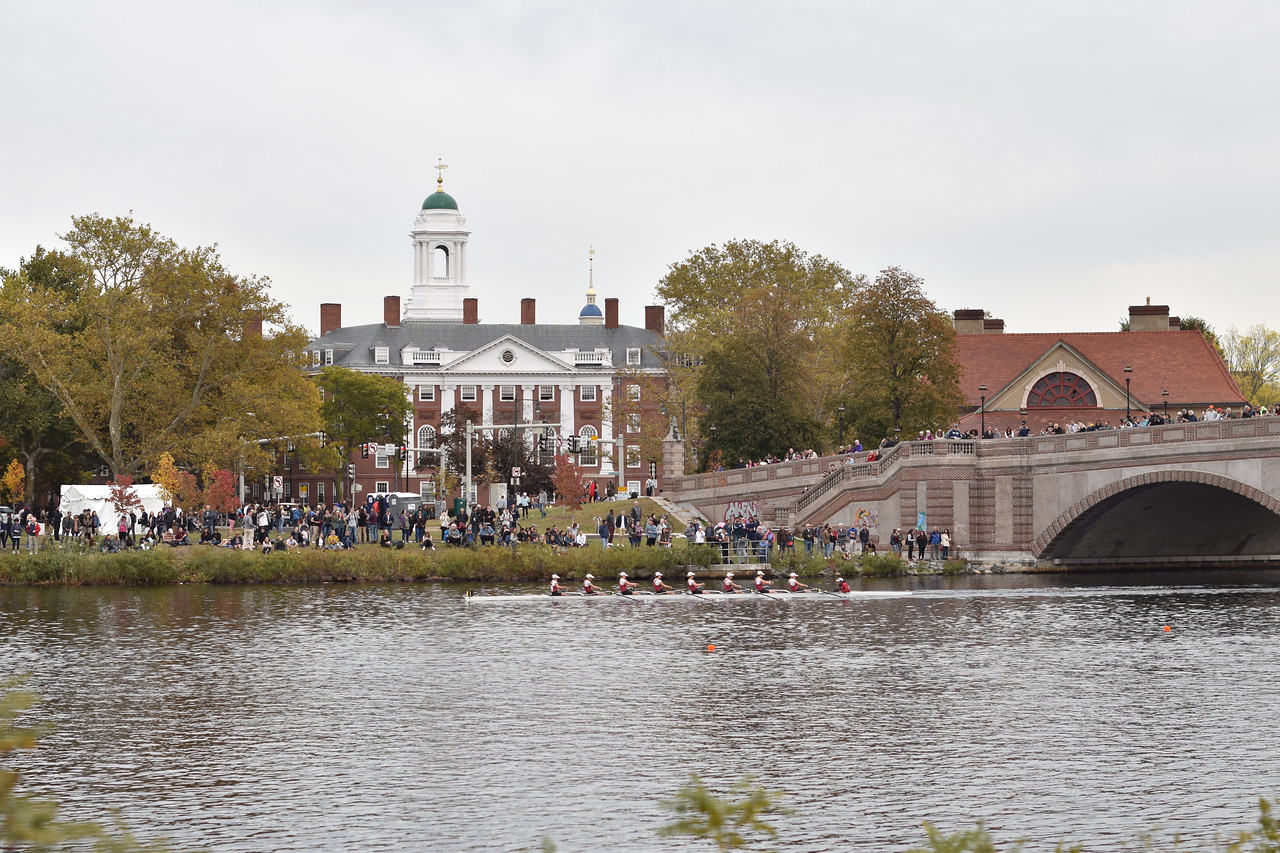 Thousands of spectators line the banks of the Charles River as boats pass by the Anderson Memorial Bridge in the Head of the Charles Regatta
By Leon K. Yang, Crimson Staff Writer

The banks of the Charles River were packed this weekend as multitudes of spectators flocked to the water to witness one of the most cherished rowing spectacles of the year: The Head of the Charles. The 55th rendition of the regatta brought with it crisp days jam-packed with highly competitive races as legions of boats sliced through the water down the five kilometer course.

At both Newell and Weld boathouse, deep, crimson flags fluttered in stark contrast under the cloudless sky. Harvard’s rowing programs took to the water to test the highest competition from across the country and to defend their home course.

The Radcliffe lightweight team took the field by storm, taking second in the lightweight eights in a time of 16:08.870. The boat, steered by senior Julia Pesner and paced by junior Brigid Kennedy in the stroke seat, finished just behind Princeton, in 16:07.2248, and edged out Georgetown, Boston University, among other crews.

“We went off the line high and hard, settled into our base rhythm, which was a very strong and long rhythm, and then where I think we had our best shift was coming through Weeks turn, which is right under the Weeks Bridge,” Kennedy said. “Our coxswain got us a perfect line coming out of the bridge, and we just flew. We brought the rate up, and our sprint really started at the half-way point of the race. We just kept driving it up from there, and we were rowing technically very well. We’ve never rowed stronger than we did in that back half.”

The staggered start of the regatta allowed the team to push ahead and catch boats that had started before them.

“We were bow five in this race, and it was to our advantage because we got to push off the boats behind us and also chase down Georgetown, which was very fun,” Kennedy said. “So I think it’s a fun mentality to have, especially because it’s so different from spring racing, when you are side-by-side the whole way down. It makes for a very exciting race.”

The Radcliffe heavyweight team emerged with two fourth place finishes in the club fours and club eights on Saturday, finishing in 19:01.666 and 16:48.244, respectively. Duke and Yale emerged victorious in the races with times of 18:37.474 and 16:42.863, respectively.

On Sunday, the Black and White finished in 8th and 14th, respectively, in the championship eights and fours with times of 15:47.198 and 19:47.767, respectively. Senior coxswain Katherine Paglione, who said that the Head of the Charles is “overwhelming in the best way,” noted that it was advantageous to race on home territory.

“We started six boats behind the olympic boats. We started ninth and place eighth, which was really exciting to pick off a boat,” Paglione said. “It’s definitely a home course advantage race. Every single day of the year, me and the other coxswains are practicing various turns on the course. The turn around the Weeks Bridge is a particularly tricky turn that a lot of coxswains get thrown around, so to know exactly what I’m doing on the course is comforting to the rowers because they know they are getting a good course.”

The Men’s heavyweight program fielded three boats in the club eights and finished in first, eighth, and 13th. The top boat finished in 14:36.166, beating second place Dartmouth by more than 12 seconds. Senior Anthony Kenny, who raced in the eight, said that the boat was able to execute its race plan from the onset.

“We were lucky because we had the first starting position, which meant that we had a clear run of the course, so it was a really simple objective for us,” Kenny said. “We just had to have a great piece. We had the river to ourselves and we didn’t have to overtake anyone. We prepared really well the two weeks leading up to it, and we just executed our race plan, which was to push through the first two miles as hard as we possibly could and then bring it home in the last mile.”

The Crimson’s men’s lightweight program raced five boats over the weekend. The lightweight four posted a second place finish. The boat, steered by junior Michael Medaugh and paced by first-year Richard Reid, crossed the line in 16:06.047 behind first place Penn, in 15:59.492, and ahead of two Columbia boats.

Sophomore Henry Bellew, who raced in the four, commended his team and highlighted the performances of Medaugh and Reid.

“Our coxswain Michael Medaugh called a great race, got us going right where it mattered before the Powerhouse Bridges in order for us to pass that first Yale boat and got a great turn around Weeks and into Weld and Anderson,” Bellew said.

“The Charles is a super long course. Fall racing is going to be 15 minutes, 16 minutes in a coxed four, which means you are really tired towards the end,” Bellew added. “Our stroke man, who sets the rhythm of the boat and dictates how much rate we have, Richard Reid, called up the rate, moved it up towards the very end and got us going in the last 400 meters, and that kind of speed can really make the difference in this kind of racing environment.”

Harvard also fielded a boat that crossed the line in 30th place. In the club fours, the Crimson posted a second place finish. In the lightweight eights, Harvard finished in fifth and 11th place with times of 14:20.056 and 14:45.965, respectively. The top place in the race was Princeton; the Tigers emerged victorious with a time of 14:06.754.

The energy of the regatta was palpable. The multitude of spectators, which reached tens of thousands, added to the jovial atmosphere of the weekend.

“I think there’s nothing more magical,” Kennedy said. “We have the privilege of having our boathouse be on the Charles, and there’s few things more magical then pulling up to our dock and having all the alumni that we love dearly welcome us back on to the dock. It was a wonderful feeling. There was a tremendous roar when we hit the dock because they had seen the results. It may be my favorite race of the year.”

For Paglione, the epicness of the Head of the Charles will be exciting to experience in her years beyond Harvard.

“I almost think that the Head of the Charles gets more fun the older you are because you just know so many people, and there’s so many social aspects of it out of the race that you’re able to connect with all of these people from your entire life of rowing,” Paglione said. “It’ll definitely be bittersweet in terms of the last undergrad race, but I’m excited to return as an alumni.”