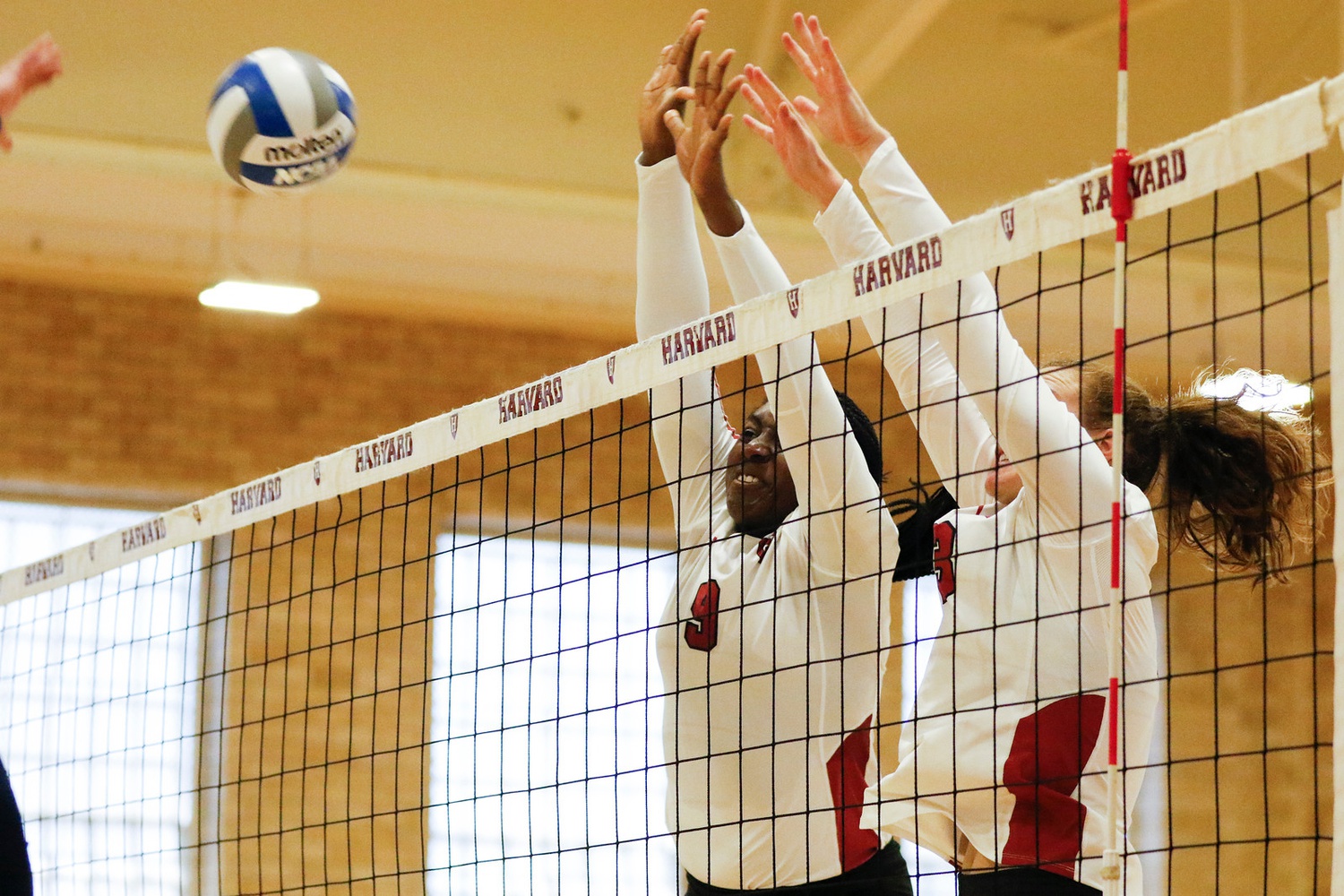 After starting the season with two wins from three, Harvard has fell to 2-8 on the season. By Timothy R. O'Meara
By Eliot Min, Contributing Writer

As the calendar turns to October, Harvard Women’s Volleyball will look to rebound from an uneven start to the season. After winning two of its first three matches, the squad dropped its next seven games and finished September with a 2-8 record.

Harvard began the season at the Harvard Invitational, with a tough loss at the hands of Colgate University sandwiched in between strong victories over Sacred Heart University and the University of Rhode Island. After falling behind two sets two one against Sacred Heart, Harvard rolled through the fourth set by a score of 25-12 and used the momentum to pull through in the fifth set, 15-13. Senior middle blocker Sope Adeleye led the charge with a career-best 14 kills. Adeleye only committed three errors during the match, which was good for a sterling .478 kill rate.

Despite fighting its way back in the third set to force a fourth against Colgate, Harvard was unable to complete the comeback and ultimately fell three sets to one. Although the squad received strong all-around performances from several of its starters — junior co-captain Evelyn Gray registered a career-high 14 kills and .276 hitting percentage, and Adeleye recorded an impressive seven blocks — the team put up a miniscule .183 kill percentage and committed 22 attacking errors en route to the loss. The squad managed to rebound in the next match, however, with a 3-1 victory over Rhode Island to close out the invitational. Gray put up an impressive 13 kills, while Adeleye and senior outside hitter Grace Roberts Burbank each contributed strong performances with 12 kills apiece.

Unfortunately, Harvard was unable to turn the momentum from its successful weekend into a winning streak. The team lost its next three matches at the Thunderdome classic in San Diego, California. Harvard dropped its first two matches in straight sets against La Salle University and the University of San Diego, and managed to win just one set against UC Santa Barbara before falling 3-1. Despite the losses, the weekend was highlighted by strong performances by some of the squad’s younger players — first-year setter/hitter Ashley Wang and sophomore setter/outside hitter Bella Almanza combined to dish out 92 assists across the three games.

“[Wang and Almanza] are directing the offense, and they're doing a fantastic job,” said Burbank.”I'm excited for them to keep it up and keep coming into their own as young players. I think it's exciting that they're already having this much success, and I know that there's only more to come for them.”

The following week, Harvard continued its skid with three tough losses, two of which came in the New England Challenge. The team lost a heartbreaker against Boston College to open the event; after forcing a decisive fifth set, the squad came up just short and dropped the final set 18-20. The squad was unable to recuperate from the gut wrenching loss in time for the match against Northeastern, which it dropped three sets to one.

To close out nonconference action at home, Harvard dropped a match against Syracuse three sets to one. Junior outside hitter Mindie Mabry continued her strong offensive season by leading the team in kills for the third straight match and hitting a strong .435. It was not enough, and Harvard’s losing streak stretched to six.

Harvard’s most recent match, which took place against Dartmouth last weekend, was a closely-contested thriller that came down to the final set. Dartmouth stormed back from a two-game deficit and took advantage of a fatigued Harvard squad, sealing the victory with a 15-6 win in the fifth set. Sophomore right side attacker Jaimie Rao turned in a sparkling performance on offense, recording a career-high 19 kills and 20 points — but it was not enough to propel Harvard to a victory in its first Ivy League matchup of the season.

“It's been a hard preseason.” said Burbank. “I think our team has learned a lot through adversity and I think we're well equipped to move into this first half of Ivy League's

and have some good experience playing some good teams under our belt”.

Harvard continues Ivy League play when it takes on the Yale and Brown squads in away matches this weekend. In October, the team will also face off against Columbia, Cornell, Princeton, and UPenn. Harvard will close out the month with a rematch against Dartmouth.