Everything comes full circle. Even if it takes about 130 years.

According to ancient football lore, Howard University’s inaugural football team lacked uniforms for its first campaign. It was 1893, and football, especially at the collegiate level, was still catching on. The sport was still 16 years shy of its first ever legal forward pass and 74 years away from the debut of the Super Bowl. With such a limited pool, Howard’s English professor head coach turned to a program that was started just two decades prior in organized collegiate football’s opening years: Harvard University. The HU located in the Washington, D.C., 450 miles away from Cambridge, supposedly borrowed its uniforms from Harvard University, a companion HU. 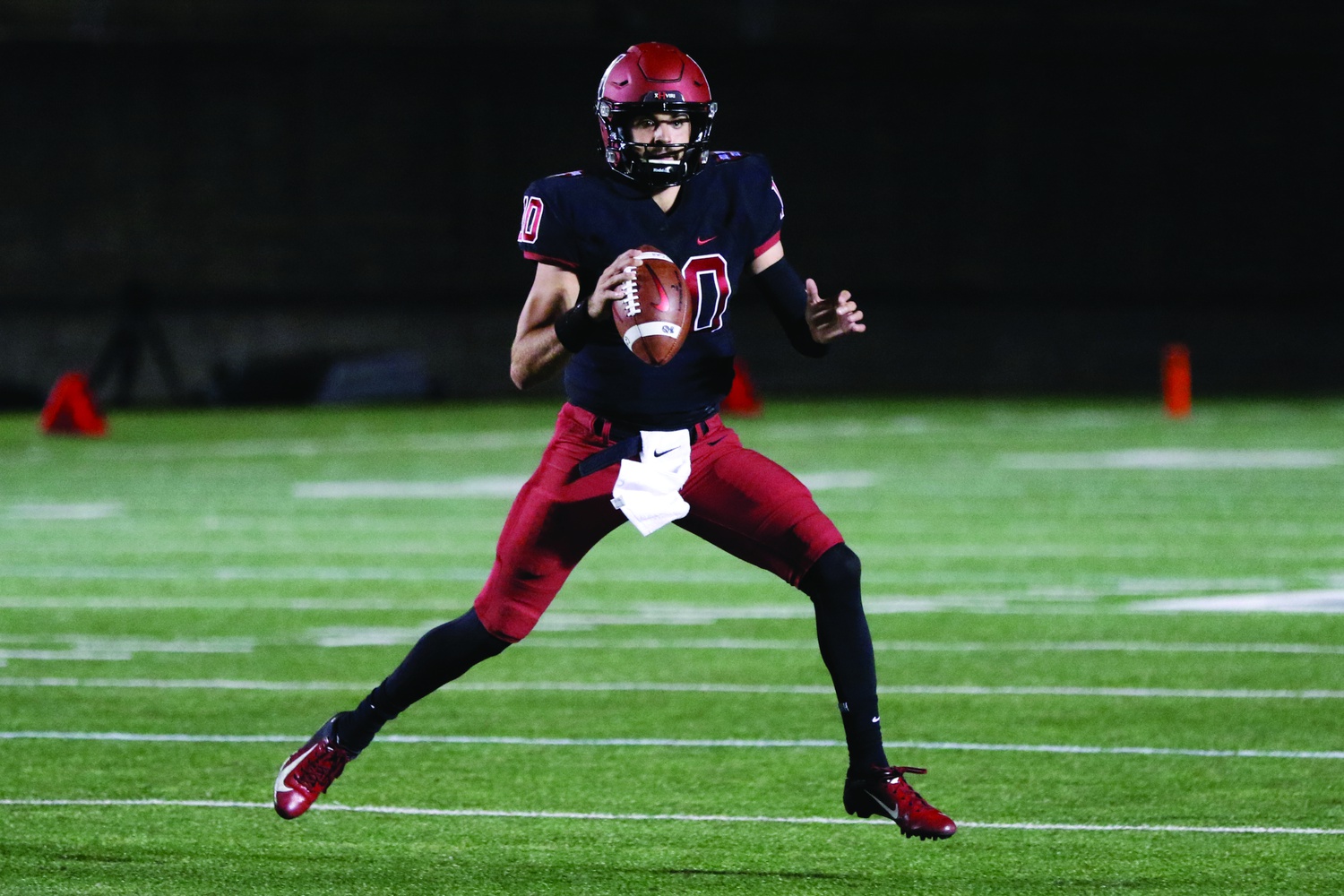 While this tale may not be true, Howard and Harvard football have been linked for over a century. On Saturday, however, they will finally truly meet on the gridiron for the first time in history.

“We were looking for new out-of-league opponents and a good academic school,” Harvard coach Tim Murphy said. “Howard is a great American college in its history and its tradition, on a lot of different levels.”

Howard, a university that has consistently been ranked academically on national lists, was founded just after the civil war as a historically black university (HBCU) in the nation’s capital.

“It’s the first time we’ve played Howard in history,” captain defensive back Wes Ogsbury said. “They like to call themselves the ‘Harvard of the HBCUs,’ so there will be some bragging rights outside of football.”

Even though this week is the Crimson’s first matchup with what Murphy called “one of the great historically black colleges,” many players on the team share personal connections to various HBCUs.

“Someone asked me, ‘as a historically black college, have any of your players had any parents or siblings [with connections]?’” Murphy said. “So I threw it out there, and I got six hits in 10 minutes.”

Outside of these personal connections, the conditions are sure to feel a bit different from most non-conference matchups for Harvard.

Howard will be sending buses of students up to Cambridge for a week full of events, tailgates, and football. The estimated influx of visiting fans is sure to add to the stadium atmosphere.

The Howard faithful will be hoping to witness a victory, as the Bison have lost four of their first five to open their season. Fans have likely had a particularly tough time, with Howard hosting only two of its opening six contests, two games that the team dropped to its opponents. While the Bison are travelling to Cambridge this season, the Crimson will head down to the nation’s capital next year before Howard returns to Harvard yet again in 2021.

While the Bison will be looking to turn things around, the Crimson will surely be hoping to capitalize on its momentum and build off of last week’s victory. In its 42-7 trouncing of conference opponent Brown under the Friday night lights, Harvard gained 520 yards of total offense, gaining 299 through the air and 221 on the ground. The Crimson was especially excellent in the high-pressure situations of the game, with the offense converting 69 percent of third downs and the defense stopping the Bears 73 percent of the time on the penultimate down. Still, Harvard remains focused on what is to come. 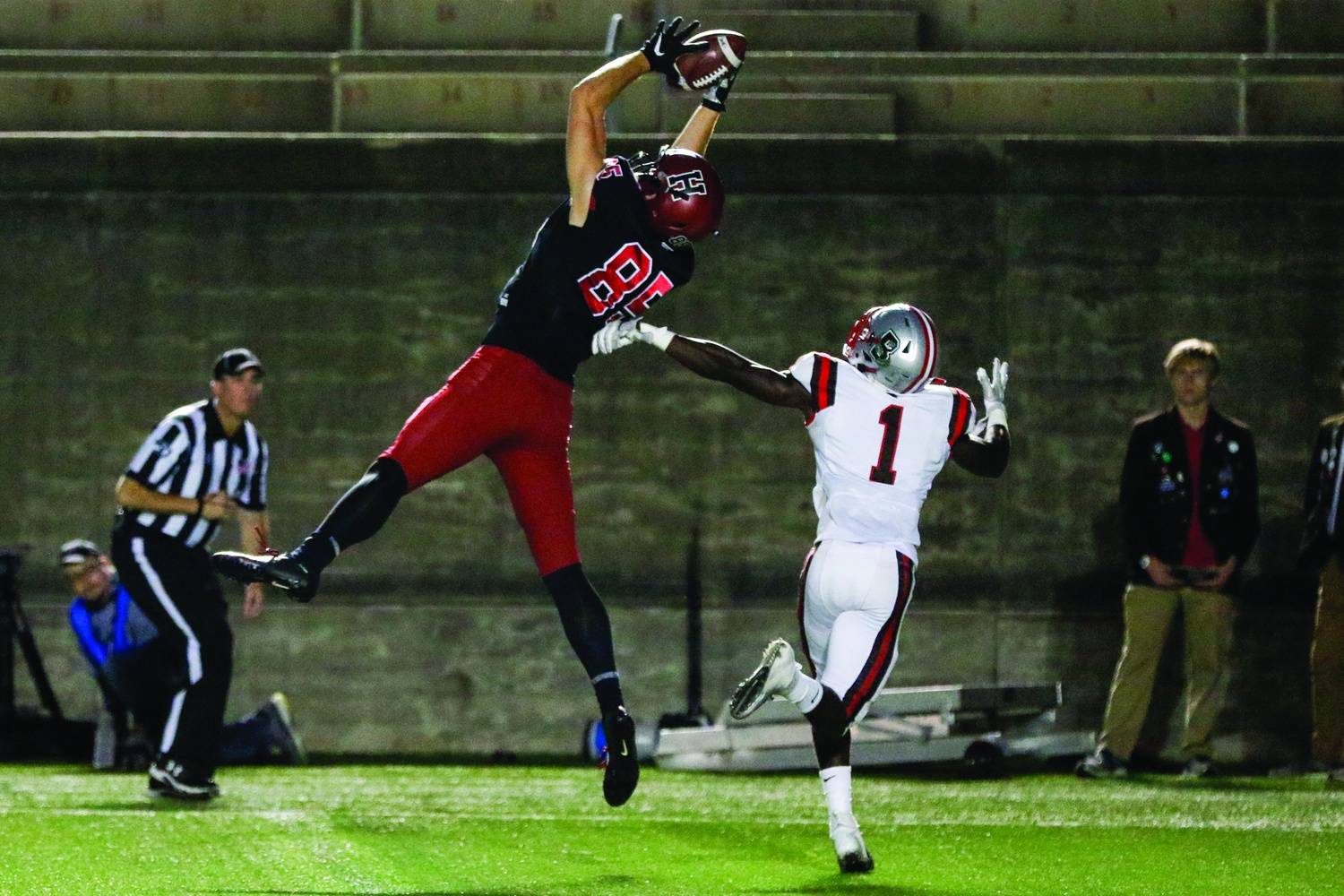 Junior tight end Adam West goes up for a leaping grab in the end zone during last weekend's home game against Brown. By Timothy R. O'Meara

“Energy has been high, focus has been great, and playmakers have been making plays,” Ogsbury said. “We’ve had a good week of practice for us.”

Even so, energy has been high for the Crimson in all areas. This includes the support system off the field as well. With the Bison sending up its students and its band, Harvard seems to feel it will be able to respond with its recent momentum, even outside of the football roster.

“I feel like this atmosphere is going to be a great one,” Ogsbury said. “They’re bringing their band, we’ll have our band, and I think our band has actually stepped up a little bit this year.”

While the band has done its job so far this season, the Crimson will also be looking to also take care of business on the field against Howard, looking for its first non-conference victory of the season.