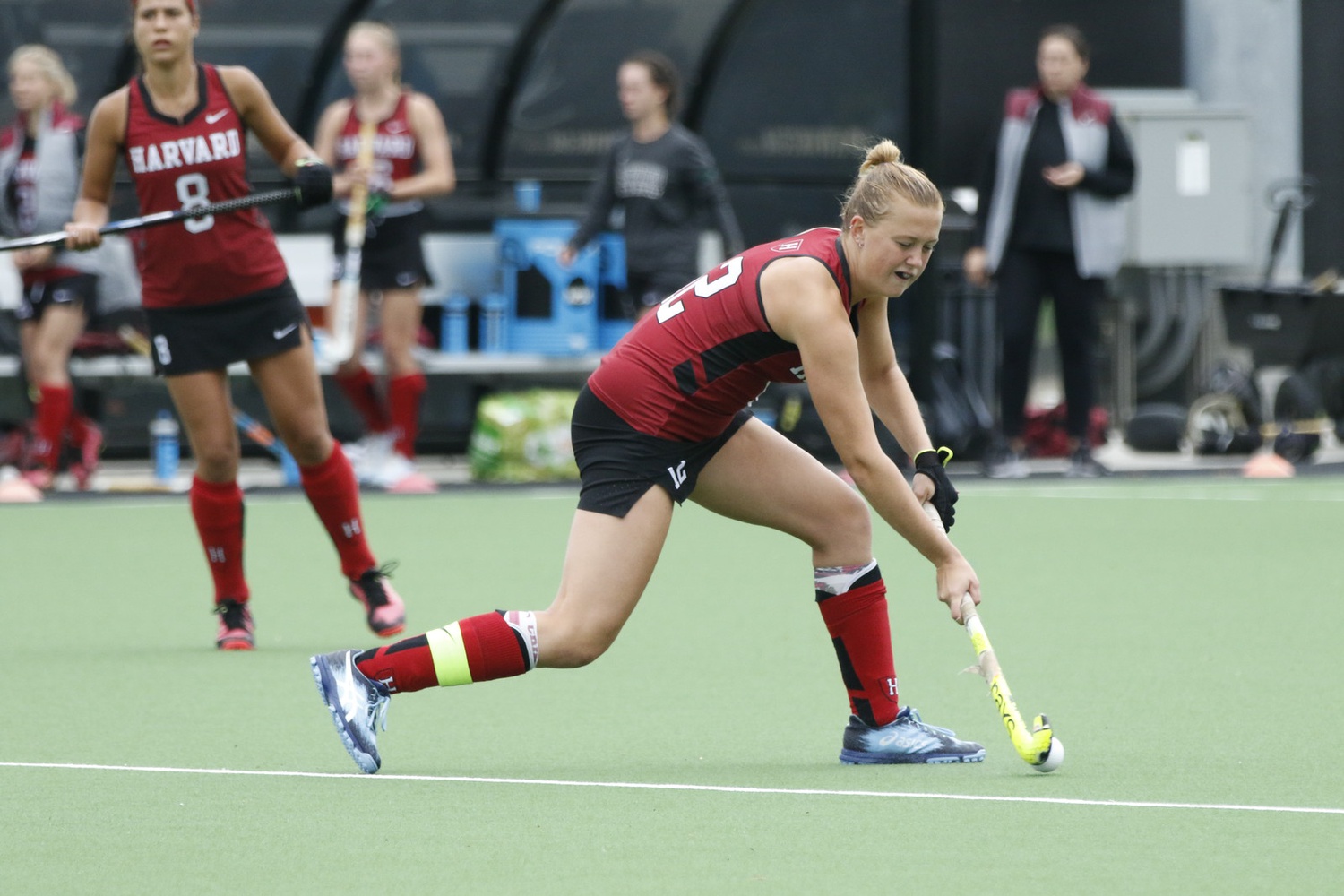 A weekend set of home games brought some familiarity and some unknowns. The two matches had little in common: Ivy play and interleague play, unranked rival and top-25 opponent, a history of wins and no history at all. The games themselves were similarly different - a fast start and a slow start, a blowout and a forced overtime.

There was, of course, one constant: Harvard’s ability to walk away with the win.

For the second consecutive game when facing a ranked opponent, the Crimson headed to overtime against No. 13 Liberty (7-2, 3-0 Big East). The last time, the extra session had proved too little, and Stanford defeated Harvard on penalty strokes. On Sunday, the Crimson (7-2, 2-0 Ivy) undoubtedly sought a different outcome.

Only five minutes of extra time were needed for that different outcome to emerge. After back-and-forth play to open overtime, sophomore midfielder Kiley Allen arched a pass over a defender’s stick and into the possession of senior forward Maddie Earle. A Liberty defender quickly covered Earle, who settled, dodged, and passed to junior co-captain Mimi Tarrant. Tarrant ripped the ball to the left corner, just past the reaching leg of Flames goalie Alison Schaefer, to end the game.

After a tired first half, Harvard took to the field not with the slump of a team down by a goal and with only two shots in the game, but with the vigor of a squad on a five game hot streak. Seven minutes into the third quarter, the Crimson earned a penalty corner. Sophomore midfielder Kiley Allen corralled the pass and settled it for co-captain Bente van Vlijmen, who took a step to the left and - as she has done on penalty corners all season - drilled it home.

The fourth quarter saw little production from Harvard but continued domination, with the Crimson’s defense shutting down Liberty’s powerful offense. A diving save on a Flames penalty corner from sophomore goalie Ellie Shahbo late in the fourth preserved the tie, giving Harvard’s offense the time it would need to score again.

Liberty entered the game with one of the nation’s best defenses - the Flames held the highest goals against average, allowing opponents only 0.57 scores per game - and an offense with the sixth-highest number of goals per game, at 3.71.

When Liberty junior forward Jill Bolton ripped in a rebound in the eighth minute of play, a distinct possibility emerged that the single score had already nailed the coffin shut. The Flames had allowed more than a single goal only once the whole season, giving up two in a win against Yale where Liberty always led.

Although plenty of play remained in the first half, the Crimson was unable to notch a single shot, offering little encouragement that Harvard could overpower Liberty’s robust defense once, let alone twice.

A second half turnaround put all the woes of the first behind, as the Crimson doused the Flames to dominate on both sides of the field. In the end, Harvard emerged with a win over one of the nation’s top defenses for its highest-ranked victory of the year.

Quakers are not famed for their aggression, and the performance from Penn (3-6, 1-1 Ivy) against the Crimson on Saturday did little to adjust this notion.

Riding the momentum of a four-game win streak and eleven-game win streak in regular season games against Ivy opponents, Harvard leapt out to an early lead, preserving the same offensive speed and efficiency from its last match, a five-goal shutout of New Hampshire.

Six minutes into the game, junior forward Natalie Sicher - who scored the game-winner in last year’s 2-1 win at Penn - rushed the ball downfield from near the Crimson goal to Quaker territory, and quickly passed to van Vlijmen in the shooting circle, who tapped the ball by Penn goalie Ava Rosati.

“We know that Penn likes to get a lot of [players around] the ball,” said Harvard head coach Tjerk van Herwaarden. “As long as we transfer and find that quick, easy pass, we should find some space…. As soon as we find that space, we have a lot of quality that can go to that space with speed.”

Twenty-four minutes later, another two goals - from sophomore forward Rachel Greenwood on an assist from van Vlijmen, and a Tarrant goal on an assist from freshman midfielder Emily Berlinghof - had been added to the board, and the Crimson was on the right side of a 3-0 lead. The Harvard defense - a freshman-heavy unit that has coalesced effectively in recent weeks into a machine that stops opponents with the reliability of clockwork - had held the Quakers to zero shots.

“Our back four defenders [were] really tight on the opposite players, just keeping them outside the circle, and [there was] a lot of communication coming from the back,” junior defender Hannah Pearce said. “Our goalkeepers chat a lot to us - where to push them [and] keep them out wide.”

The second half saw no additional mercy from Harvard. Eight minutes in, sophomore midfielder Olivia Hoover scored on a second van Vlijmen assist, and a pass from Greenwood to senior forward Casey Allen five minutes later extended the Crimson’s lead to five.

Penn junior forward Erin Quinn managed to find long and straight path to the goal in the opening minutes of the final frame to put the Quakers on the board, but Harvard responded soon after when freshman defender Mazarine Broze tapped in a rebound off Rosati on a penalty corner.

By the end of the day, six different Crimson players had contributed goals in the 6-2 win.

“It’s a really good reflection of where we are as a team, in that we don’t rely on any one player,” Tarrant said. “We’ve got a squad of 24 who… can score goals. That’s really great going into future games, because other teams won’t just be marking one player, and we can rely on our whole set of forwards and midfielders to be scoring.”

Harvard travels to Newton, Mass., to face No. 13 Boston College on Thursday before returning home to continue Ivy League play on Oct. 13 against Brown.