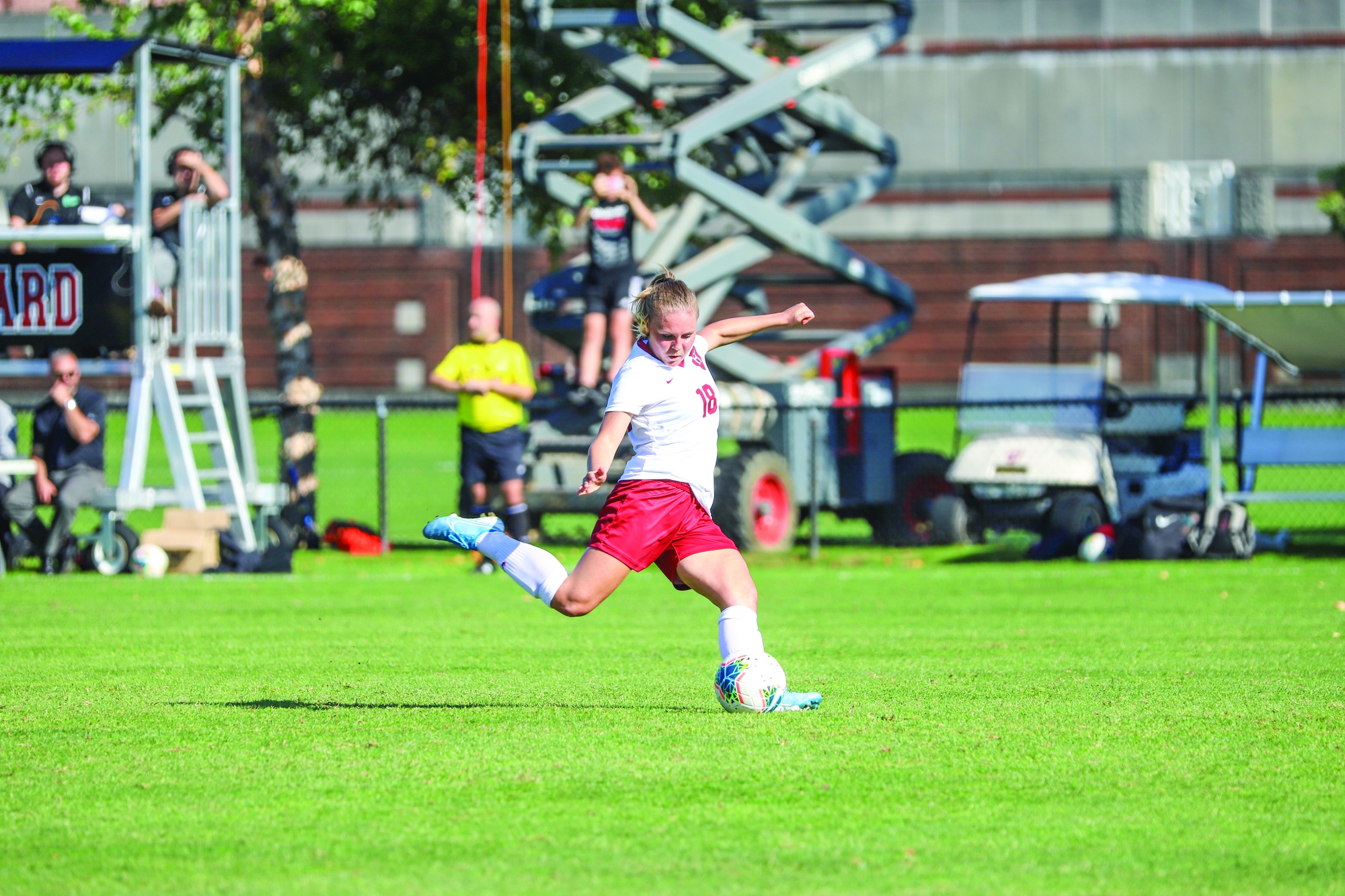 There is no doubt that any Harvard-Yale matchup has a little extra buzz to it, but when both teams have identical records and are vying for a top spot in the conference, it is safe to say that there was a lot more surrounding this game than just the historical rivalry.

On a chilly Saturday night, Harvard’s women’s soccer team (8-2, 2-0 Ivy League) took to the pitch under the lights to battle a Yale squad (7-3, 1-1 Ivy League) that looked to defend its home turf in a pivotal mid-season game. The contest would prove to be incredibly hard-fought, as neither team would budge an inch. Yet, the difference-maker proved to be a 65th-minute goal from first-year forward Gabby DelPico, as the match concluded in a 1-0 victory for the Crimson, leaving it in sole possession of second place in the Ivy League, right behind Brown (8-1-1, 2-0 Ivy League).

Senior goalkeeper Kat Hess played her part in the shutout, tallying up five saves. When speaking on the environment of the night, Hess said, “It was incredible being out on that field (that) night. It was our first away game of Ivy League play, and for the seniors, it was the last time that we would have the opportunity to be a part of the oldest sports rivalry in the country. There were hundreds of fans, students, families, and friends fighting through the cold, cheering and supporting both sides, and it just made the atmosphere come to life even more.”

Although both teams went into the half scoreless, there was definitely no shortage of action. Harvard’s attack, led by DelPico, first-year forward Angela Caloia, and junior forward Lauren Raimondo, fired off shot after shot, but could not quite get anything past Yale’s keeper. On the other end of the field, the Crimson defense proved to hold strong, with Hess right at their back in case a Yale forward was able to squeeze through for a shot opportunity.

The second half began in a very similar matter to the first, as both teams searched for that one spark that could change the entire game. Finally, in the 65th minute, that moment appeared to come to fruition for Harvard. Junior forward Murphy Agnew surged through the Bulldog defense and, right before colliding with a Yale defender, centered a beautiful pass to DelPico. DelPico then took three quick touches into the box and netted a perfectly placed goal into the upper-right corner, giving the Crimson a 1-0 advantage.

“During the sequence that led up to the goal, I saw Murphy cutting towards the goal with a really hard run and two players about to challenge her,” said DelPico. “I knew I had to get into a position where she could see me and get me the ball in the box. Murphy delivered a great ball to me. I stayed composed because I knew it was a good opportunity. Instead of taking a quick one-touch shot and hoping it would get through, I took a couple touches past the defenders in the center to find a little space where I could find the top corner. I knew my team was counting on me to execute and I owed it to them to finish.”

Despite grabbing the lead, there was still plenty of time left and everyone on the team knew that they could not ease up until the final whistle, as one mistake could end up doing immense damage. Yale certainly kept up the pressure, and, in the 76th minute, it certainly looked as if the Bulldogs were going to tie it up. After a rare instance of beating the Crimson defense, senior forward Aerial Chavarin of Yale found herself one-on-one with Hess as she dribbled into the box. The game appeared to come down to this moment, and it was here that Hess deflected a rocket off of the foot of Chavarin. The unbelievable play evoked newfound energy and passion from the rest of the team, helping everyone else remain strong for the final stretch.

When asked about the play, Hess shared some very interesting insights into what was going through her head. “Growing up, I had played with and against Chavarin over the years, so I knew how fast and dynamic of a player she is on the pitch,” said Hess. “And as Chavarin was nearing the box, screaming towards goal, all the yelling and cheering quieted, and my mind was clear and steady. Knowing her tendencies and the way that she approached the ball, I was able to anticipate where she was going to shoot, and was able to get my body behind the ball. After the ball was cleared out and the play ended, the energy of my teammates both on the field and on the sidelines was unbelievable, and we fought together until the final whistle. This game was about winning our one-on-one battles together as a team, and that save was only one of the countless individual victories that led to our win last night.”

After this potentially game-saving play, Harvard regained its focus and closed the game out strongly–truly earning its hard-fought victory. With a current record of 8-2, Harvard’s women’s soccer is now riding a five-game win streak and has already surpassed its total win count from last season (7-7-1) with no intention of slowing down.

Hess, being one of the veterans on the team, wanted to improve and strive for more after last season. “The most important part of HWS is our team culture and our shared goal of reaching that Ivy League title,” said Hess. “After the ending of our 2018 season, we came together as a team and redefined who we are, what we stand for, and how we were going to compete in 2019. Our victories this season have all been a team effort, whether you’re a 90-minute starter, a sub coming off the bench, or cheering your heart out on the sidelines, every player on our team is fully bought into the values and standards of HWS. We have had ten of our players score goals for us this season, and I think that shows most in how we approach our preparation and competition both on and off the field.”

The importance of the familial culture of the team is apparent to any spectator. As a first-year, DelPico spoke to what it has meant for her to be able to join a team like this. “The number one thing that separates the Harvard women’s soccer team from other schools is that it is truly a family,” said DelPico. “Our team culture is something we all focus on every day. We have that perfect balance of being able to call each other out on the field, while still remaining best friends off the field. I’m so proud of how much success we’ve gotten so far this year, and I know we are destined for more. Our captains and coaches set the tone for the positive energy that flows throughout this team. Everyone knows their roles and knows their worth.”

With six games left on the regular-season docket, the Crimson looks to continue its success and hopefully reach the NCAA tournament. Harvard will return home next Saturday and seek to extend its win streak against Cornell (4-4-1, 0-2 Ivy League).