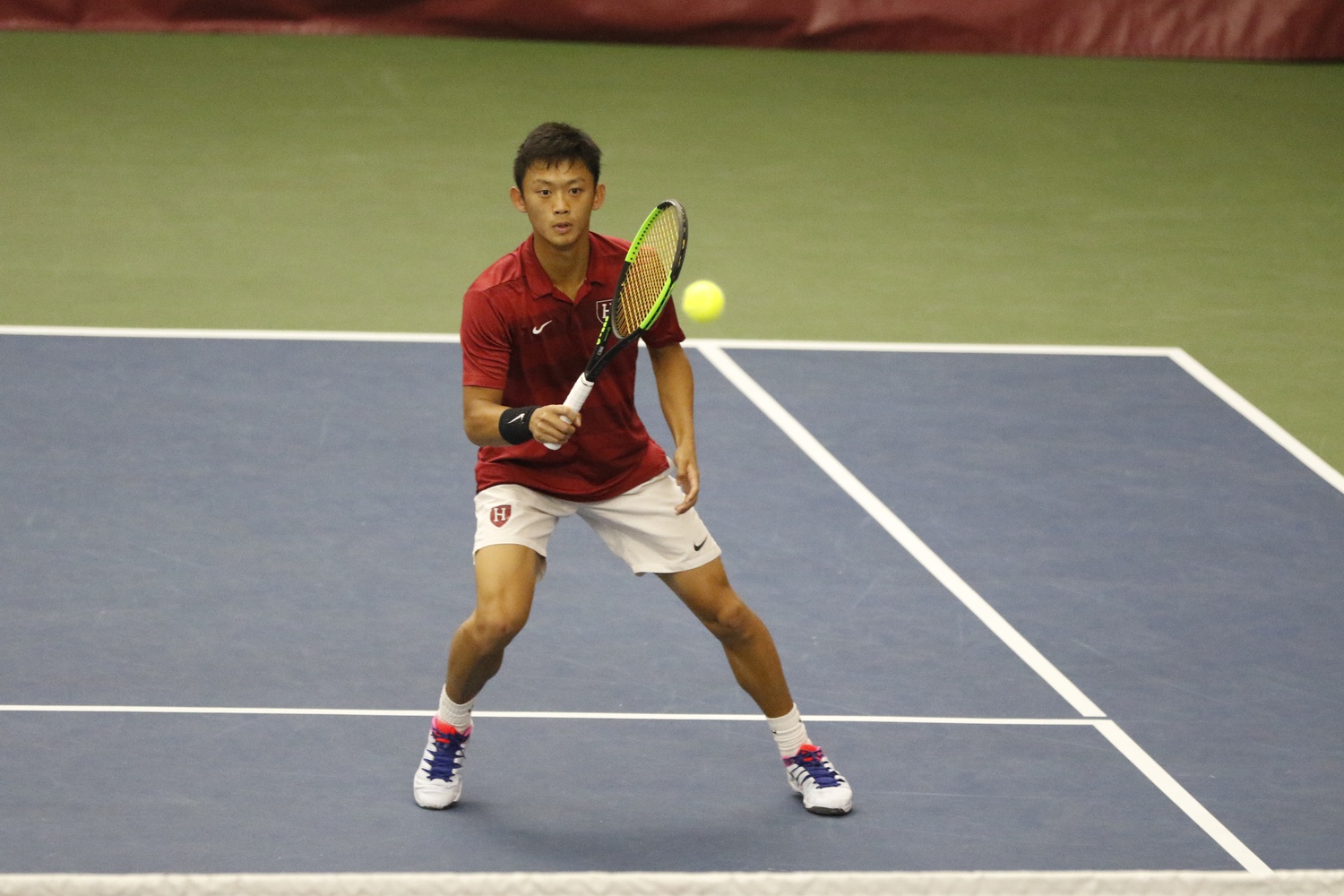 Since the tennis season really gets into high gear in the spring, the Crimson treats the fall as a chance to perfect its play. By Timothy R. O'Meara
By Mackenzie Condon, Contributing Writer

“I’d rather lose after being the more aggressive guy in the match than win by getting lucky with playing it safe.”

These words came from Harvard junior Constantin Zoske going into the men’s singles final on the last day of the three-day Dartmouth Invitational this past weekend. Zoske was up against Dartmouth’s Anders Gibbons after consecutive wins on days one and two. Despite Zoske’s bold attempts to go to the net more and take strategic risks, he was never able to close the gap on his opponent throughout the match, eventually losing 6-2, 6-4.

The Crimson men’s tennis team used the weekend to build upon improvements made over the past month of tournament play. Along with Zoske, two other members represented Harvard at the Invitational: sophomore Bo Leschly and freshman Alan Yim. The invite included many squads from the northeast including Ivy League teams Cornell, Dartmouth, and Yale.

For sophomore Bo Leschly, a highlight of the weekend came on the first day in a thrilling match against Yale’s Camille Kima. Leschly decisively overpowered Kima in the first set, making the match look like it would be easy to tie up. But Kima was not to be overlooked. Leschly gave up the second set after making more errors and giving up some crucial points, making the match score 6-2, 4-6, going into a ten-point tiebreaker.

“The second set was close but I lost my mental edge a bit. Going into the tiebreaker, I had to hunker down and from there I stayed mentally tough and was able to pull it out,” said Leschly, who topped Kima 10-6 in the tiebreaker, securing the win against his Ivy League opponent.

Leschly had another win on day two, this time in straight sets. He also paired up with Yim and then Zoske for two doubles matches on day two, but could not reach victory in either one.

“We definitely had a better showing in our singles matches this weekend. We couldn’t put all the pieces together in our doubles matches, and we’ll be looking to work on that going forward,” Zoske said.

Yim, who entered the tournament with a strong 6-1 record, also had his own Ivy League singles victory on Day 3, defeating Dartmouth’s Peter Conklin, 6-4, 6-2. But with spring being the true collegiate tennis season, the Crimson will be even more focused on trouncing its Ivy League opponents then. More than anything, the fall off-season is a time to hone in on new skills and to improve weaknesses.

“It’s fun of course to beat players in our league but the fall is about practicing more than anything,” Leschly said. “In the spring we will really look to get after it in terms of wins and losses, especially when it comes to Ivy League play, but right now there’s a lot of skill work going on and these matches are practice for that.”

“In the fall our coach gives us certain goals and we focus on things to fix or change about our game,” Zoske said. “The matches now are really a time to try that stuff out whereas in the Spring the hope is that the changes have been made and that we aren’t consciously thinking as much about our game. That’s when we are concerned with championships and rankings”

For Zoske that means working on improving his percentage of successful first serves, placing the ball more strategically in the court, and taking control early and often in each point. For Leschly that means staying mentally tough throughout matches and working on new patterns of play. Whatever the goal, there is much more time to practice and to perfect as the team gears up for the spring season. Next up for Harvard is the International Tennis Association Championship regionals from October 17 to 21 at the University of Pennsylvania.