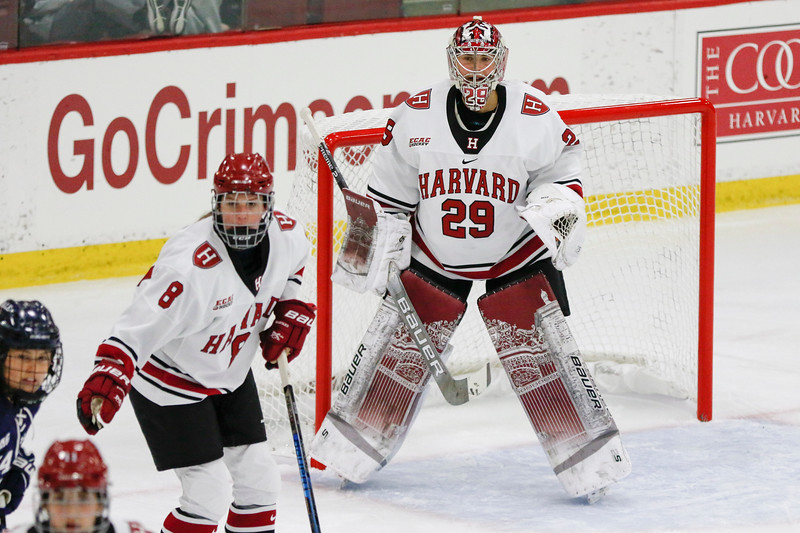 The Crimson cruised against No. 7 Princeton and topped Quinnipiac in overtime this past weekend. By Timothy R. O'Meara
By William C. Boggs and Connor J. Wagaman, Crimson Staff Writers

In its first weekend of back-to-back road games, Harvard stole the home-ice advantage from its opponents, cruising to a 6-2 win over No. 7/7 Princeton and outlasting Quinnipiac in a 3-2 overtime thriller.

The Crimson’s spotless 5-0-0 start to the season is its best since the 2007-08 season, when the eventual national finalists rattled off 11 consecutive wins to open play; the 2012-13 NCAA quarterfinalist squad also won five to start.

A flurry of action in the final minutes of play — minutes that bridged the gap from regulation to overtime — briefly threatened to halt the Crimson’s season-opening win streak on Saturday, before a quick start to sudden death dashed the Bobcats’ hopes of a comeback at home.

The match had held at 2-1 since a score by Harvard (5-0-0, 5-0-0 ECAC) from captain Kat Hughes in the third minute of the second period, a single shift after Quinnipiac (4-5-2, 0-4-1 ECAC) netted a game-tying goal in the opening plays back from intermission.

“We have that mentality of, ‘OK, they scored, now we’re gonna score,’” Hughes said. “Everyone’s attitudes are so positive and encouraging and confident in each other. I think that played a huge role in responding to goals against.”

Then, with exactly one minute remaining, the Bobcats earned a power play. Quinnipiac pulled its goalie, bumping the standard 5-4 advantage to a 6-4 tilt. The Crimson crushed a number of efforts, but the Bobcats collected a rebound with under 25 seconds to play. After a series of passes, co-captain Kati Tabin tapped the puck in to force extra time.

Harvard recovered quickly. Sophomore goalie Lindsay Reed and the defense fended off several attempts from Quinnipiac, and the puck found its way to Crimson sticks. Hughes flicked the puck toward the net, and sophomore forward Anne Bloomer was there for the follow-through. For the sixth time this season, her shot converted.

“It was really a great team effort,” Bloomer said. “It started with the shift before, getting it into the opponent’s zone, and us just working it and finding pucks on net.”

Back-and-forth play defined the entire match in a way that Harvard had yet to see this season. The Crimson never trailed — the 2019-20 vintage of Harvard hockey, in fact, has yet to trail in any game — but the Bobcats never fell more than one goal back.

The Crimson first struck seven minutes into the game on a shot from junior forward Keely Moy. Quinnipiac evened the score in minute two of the second, but Harvard responded moments later when Hughes cashed in on a rebound from junior forward Becca Gilmore.

The remaining time was all defense — that is, until the final minutes, when the Bobcats found twine to force overtime, and the Crimson scored to win its opening quintet.

“The Quinnipiac game was a huge moment for our program, because, as a senior, that was my first overtime win at Harvard,” Hughes said. “Getting scored on with 18 seconds left, and not getting down … speaks a lot to our team’s resilience, so that was an awesome feeling.”

The Crimson struck early and often on the offensive, netting three goals by the end of the first period of Friday’s contest. The Tigers (5-2-0, 3-2-0 ECAC) cut the lead to 3-1 halfway through the second period, but Harvard’s fourth goal soon after stretched the lead to 4-1 and put the Crimson in control for the 6-2 final.

“Against a great like that with a strong defense, you’ve really got to take your chances when they give them to you,” Hughes said. “So, we really did take the puck to the net as much as we could, and we were able to capitalize a lot.”

A key feature of the Crimson attack was its balance. While Bloomer did contribute a multi-goal game, she was far from the only player to make a dent on the scoresheet — five Harvard skaters added goals, and four others added at least an assist.

“I think it [the scoring balance] just shows that we have a lot of depth,” Bloomer said. “Something that I think we struggled with last year is getting goals on the board, so having the ability and the skill and the work to put a lot of goals up means that we’re more likely to win games.”

In addition to balance, timely scoring played a major role in Harvard's fast start. A 2-0 lead going into the first intermission still would have buoyed the Crimson, but a three-goal lead could prove insurmountable for the Tigers. With just 25 seconds and change left in the first, junior defender Emma Buckles managed to collect a loose puck in front and stash it in the back of the net, taking the air out of the Princeton defense that had hoped to escape the period on a high note.

The scoring settled down for the first half of the second period until, at the 9:16 mark, Princeton broke the ice with its first response of the game. Winning the draw back to the point, the Tigers senior forward Carly Bullock fired a wrister on the ice through traffic before junior forward Sharon Frankel slid home the rebound to take the score to 3-1. Nonetheless, the two-goal deficit only lasted for 1:52, as Bloomer netted her second of the game. Tipping a centering pass from junior forward Becca Gilmore into the top shelf, Bloomer re-established momentum for Harvard.

“One thing that I think our team did really well this weekend was to respond immediately to our opponents’ scoring — which is huge, stealing the momentum right back,” Bloomer said. “A game has its ebbs and flows, and we just try to move on right after they score and take the game back into our hands.”

After taking the 4-1 lead into the locker room for the second intermission, the Crimson would score its fifth goal on a powerplay strike from sophomore forward Dominique Petrie before the Tigers responded with a powerplay score of their own to get game back to a three-goal deficit.

Harvard would have the last laugh, however, capping the scoring with 5:11 left in the contest on a breakaway deke from sophomore forward Kristin Della Rovere. In the cage, Reed contributed a stellar performance for the Crimson, turning away 40 of 42 shots faced. In particular, Reed set the tone for the Harvard scoring outbreak in the first by holding the Tigers scoreless on 16 shots. Princeton outshot Harvard in the opening act, 16-11, but Reed ensured that the shot advantage did not translate to a goal advantage.

After a 10-day layoff, Harvard will lace up for its first non-conference game of the year on Nov. 19 at 7 p.m. away at Boston University. The teams last went head-to-head in the 2019 Beanpot Championship, a heartbreaking overtime loss for Harvard that brought the Terriers their first Beanpot title. With time off, Harvard's biggest challenge will be to maintain the momentum of the fast start and push its win streak to six.