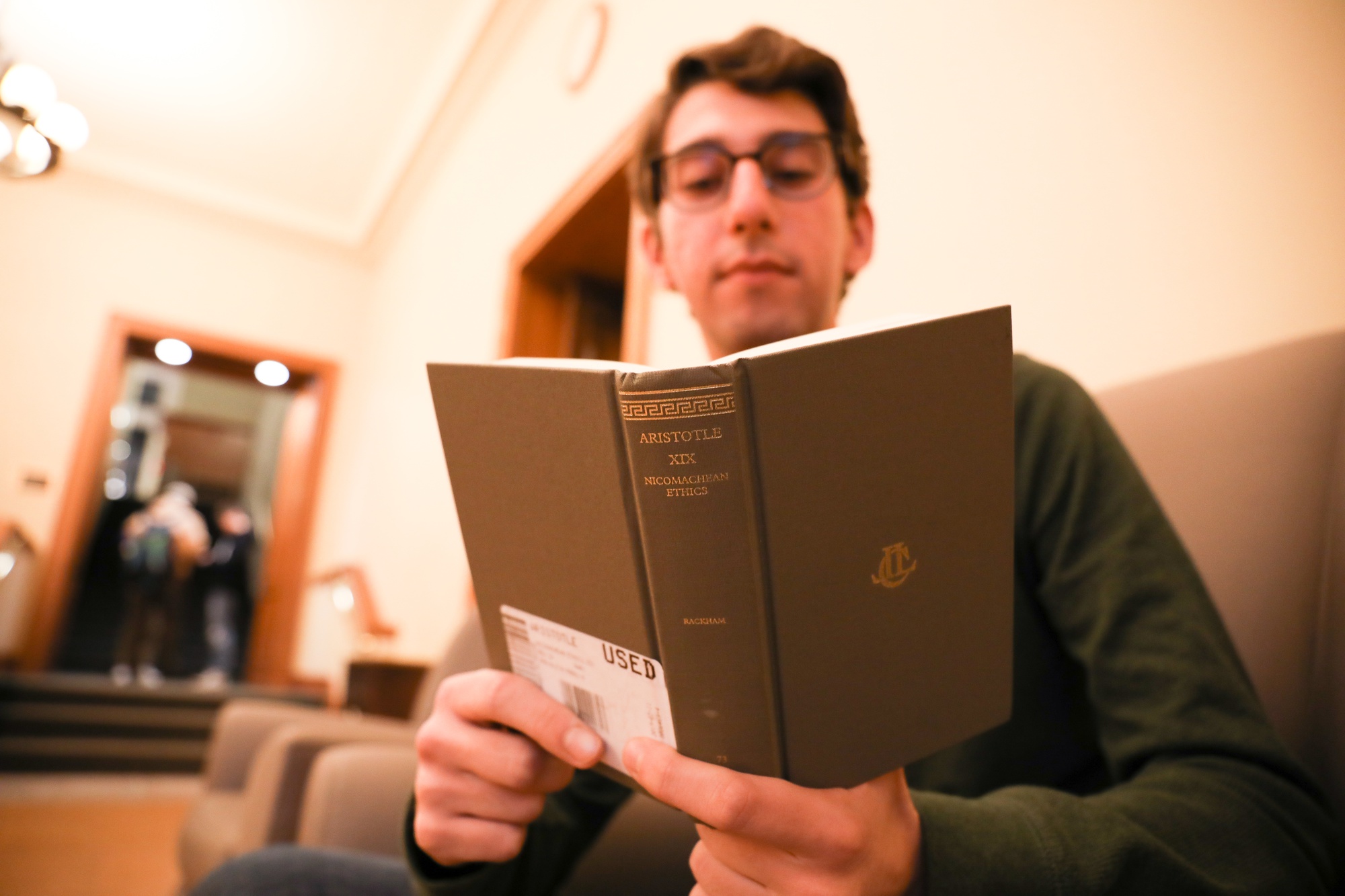 Aristotle M. Vainikos '23, named after his grandfather Aristotelis, explores the experiences of students who share the same name as famous figures.
Advertisement
Advertisement

A Rose by Any Other Name

So, for me, the name is not so much an allusion to the grandeur of the Parthenon and the philosophers who ruminated beneath its shadow; rather, it sparks an image of a hard-working, small-town, Greek-American immigrant.
By Aristotle M. Vainikos

My Harvard introduction is largely the same as every other freshman’s: name, home town, freshman dorm. But the inevitable response I typically get is not standard at all:

The next few questions follow a similarly predictable progression. “Are you named after the Philosopher?” “Are you Greek?” “Are you going to concentrate in Philosophy?”

No. Yes. Probably Not.

Many times, people don’t even believe I’m telling the truth. “Now, what’s your real name?” or “Is that your alias for the day?” are both verbatim questions I’ve heard in the last year.

People might say I have a “famous name,” but it’s tough for me to see it that way. I’m named after my grandpa, or “pappou,” who was born in a small village in Greece where “Aristotle” is a common name. At my Greek Orthodox church alone, I know three other Aristotles.

When my pappou arrived in America in the mid-1950s, his uncle advised him that having a name as identifiably “Greek” as Aristotle wouldn’t serve him well in the States –– he’d have to alter his name to “Arthur.” Reluctantly, he did.

But when my mother was naming me, she wanted to be as authentic as possible: she called me “Aristotelis,” the Greek version of Aristotle, my pappou’s true name.

So, for me, the name is not so much an allusion to the grandeur of the Parthenon and the philosophers who ruminated beneath its shadow; rather, it sparks an image of a hard-working, small-town, Greek-American immigrant. Not a famous name; a ubiquitous one.

Naming can serve as an exercise in creativity. Recently, “unique” names have seen an almost 200 percent increase in popularity. Whether it’s Beyonce and Jay-Z attempting to trademark Blue Ivy, or “Atticus” taking the top spot on parents.com’s 2017 list of “Top 100 Unique Names,” American society has become fascinated with crafting the next “unicorn” name.

Explanation for this trend can be found in fads and pop culture. For example, names derived from Game of Thrones, including Arya and Khaleesi, have shot up in popularity in the last couple years. Another explanation is the “American frontier mindset,” as dubbed by a 2016 BBC article. In a society that values individualism, Americans strive to stand out as unique and exceptional. Some suggest this trend might motivate parents to seek names that will give their children a head start as they aspire for singularity. Regardless, the trend toward unique names only continues to increase.

I’m also not the only one at Harvard to sport an uncommon name. Galadriel A. Coury ’23 is named after — yes — the queen of the Elves in J.R.R. Tolkien’s The Lord of the Rings trilogy. She explains that her father’s cousin suggested the name, and after much deliberation, her parents agreed on it for its “mystical and powerful” sound. She describes herself as very “pro-creative names.”

“People remember me,” she says. “In my interviews or whatever, I can just start off with my name… it makes me interesting right off the bat. I don't have to make as much of an effort at looking cool, because my name does it for me,” she says with a chuckle.

Coury’s name often provokes a double-take. Seconds after offering her name to a new group of people, one or two heads will inevitably flip back toward her, eyes wide. “Did you know your name is from The Lord of the Rings?” Yes. Yes she does.

James U. Joyce ’22, an active Crimson editor, hasn’t experienced quite the same benefits that Galadriel has, but enjoys having a famous name nonetheless.

“In high school, there was no reaction. People didn’t really know who James Joyce was,” he says. “Then I got [to Harvard]. It became a big thing...Every week or so, I meet someone new who says, ‘That’s your name! I have to ask about that!’ People here have actually read James Joyce.”

Of course, I had to ask if there was any relation to the towering literary figure: Joyce affirmed that supposedly there is one, generations back.

Fortunately, he doesn’t feel any expectations associated with his name. “But one of my goals, he says, “is to be the first Google search result when you look up James Joyce.”

This is a point on which Joyce, Coury, and I could all agree –– while people might have expectations for you when you’re named after a well-known figure, you really just feel like a regular person. Coury puts it best: “I don't know anything else. I don't have anything that I would compare [having a common name] to...There's never been a point where I haven’t liked my name.”