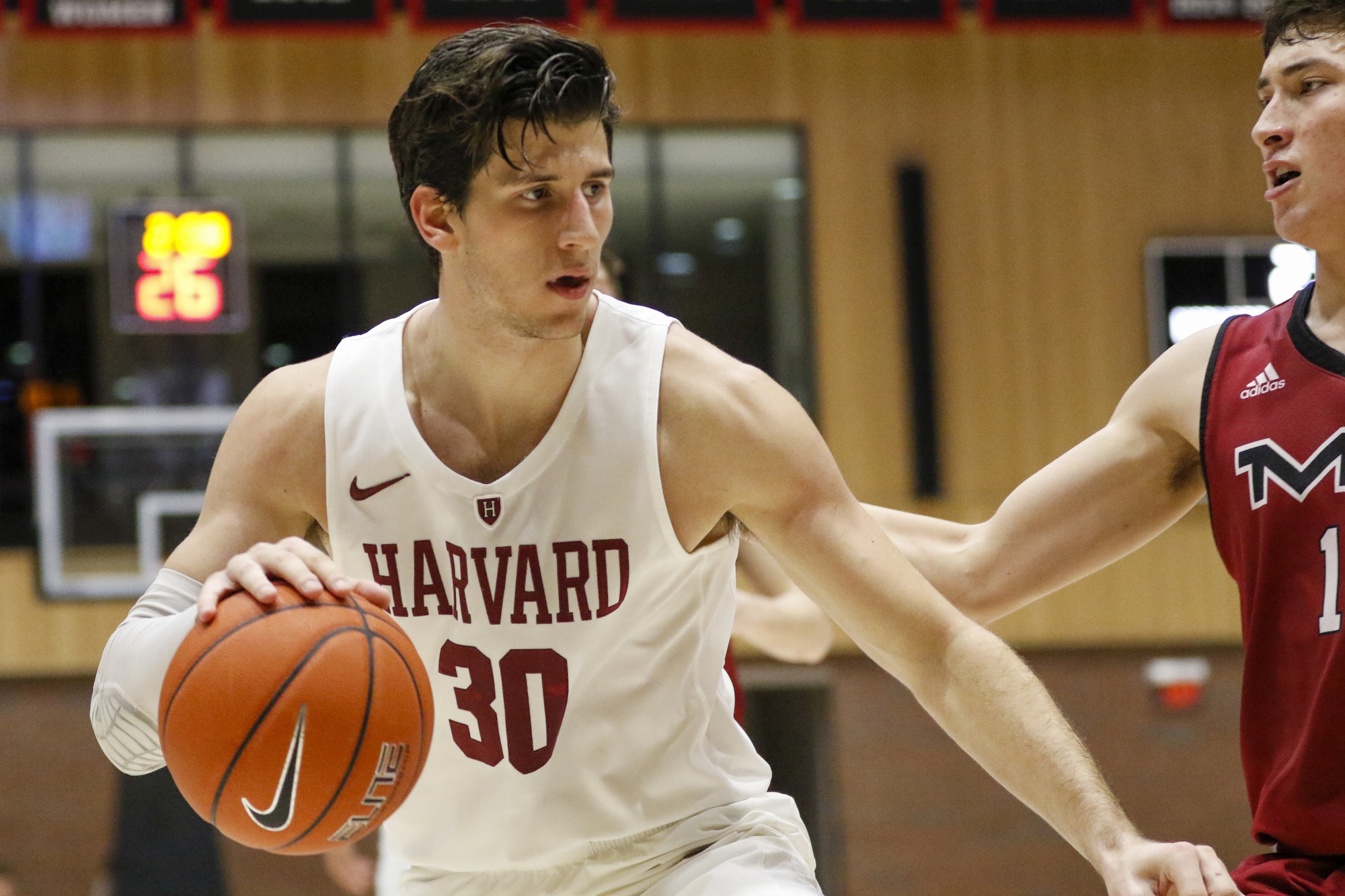 The flight from Boston to Toronto will only take an hour or so, but for three of Harvard men’s basketball’s players, the trip will hold extra significance.

Junior Danilo Djuricic, sophomore Noah Kirkwood, and first-year Luka Sakota all hail from the Canadian province of Ontario, and Saturday’s James Naismith Classic contest against Buffalo will mark a return home for the trio. For Djuricic and Sakota specifically, Saturday’s game at Toronto’s Scotiabank Arena, home of the NBA’s Raptors, will hold even more meaning.

While a four-hour drive is necessitated to reach Kirkwood’s hometown of Ottawa, Djuricic and Sakota both grew up within an hour from downtown Toronto and are expecting large crowds of friends and family in attendance for their homecomings. The two call Brampton and Etobicoke home, respectively.

“Coming to a school in the States, I never expected to go back and be able to play in front of my family and friends,” Djuricic said. “It’s going to be a great experience and hopefully we play hard, show out, get a good W.”

But for Djuricic and Sakota, their relationship runs far deeper than merely sharing nearby Toronto as home.

In many ways, Luka and “Nilo” came to Harvard on nearly parallel paths. Both grew up as part of the robust Serbian immigrant community of over 30,000 who currently reside in one of the world’s most multicultural cities. Sakota’s father Dragisa was a renowned professional volleyball player for OK Bosna in the Division I Yugoslavian League before coming to Toronto. Djuricic is also no stranger to the world of professional athletes — in fact, his uncle Mike played football at Boston College before becoming a journeyman CFL defensive lineman.

The fellow Serbian-Canadians, who quickly rose through the ranks of youth basketball in Toronto, first met about a decade ago. It was an encounter that the younger Sakota, only around eight but playing up for his age at that time, would like to forget.

“We ended up whooping his team, I don’t know how much,” Djuricic said.

“Seeing this dude [with] long hair, he can really play,” noted Sakota on his first impressions of his future teammate. “I was like, ‘Who is this guy?’. We just started to build a relationship from there.”

The two bonded on and off the court, as did their families. Bumping heads in the tight Toronto basketball circuit throughout their teenage years, Djuricic and Sakota were also deeply entangled in the Canadian national youth team system. The former captained the U16 and U17 teams, playing with current New York Knick R.J. Barrett before later winning gold with the U19s in the 2017 World Cup. The latter also competed on the U16s and U17s where he teamed up with a future member of the Crimson and coach Tommy Amaker’s first commitment to the Class of 2024, Josh Hemmings.

“It was a great experience playing against some of the best people around the world for your age group,” said Sakota of competing in Argentina at the U-17 World Cup. “Just learning so much from other players as well, different playing styles, and just representing your country, there's really no better feeling than that.” 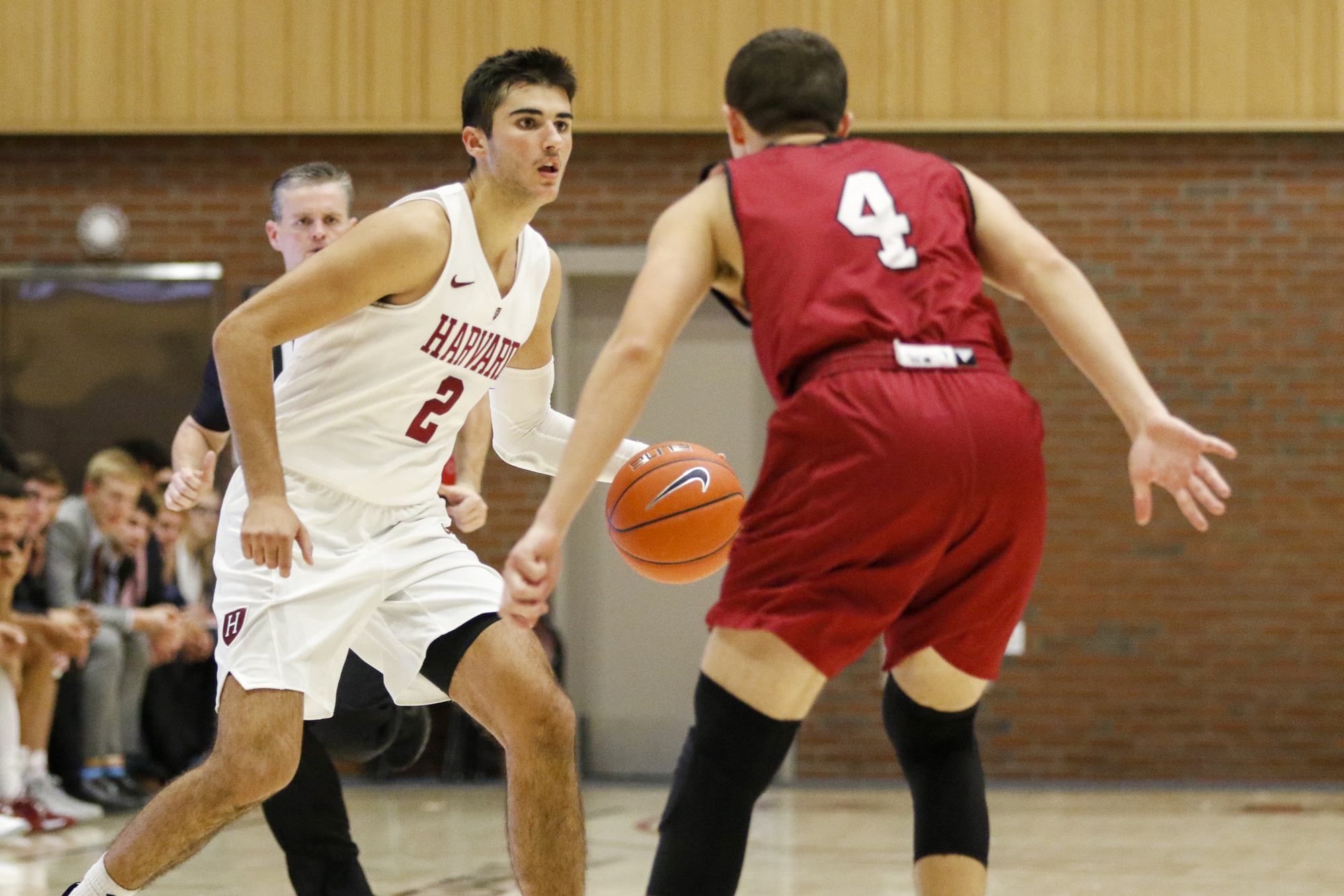 Luka Sakota has earned solid playing time off the bench so far in his first season with Crimson. By Timothy R. O'Meara

In preparing for those tournaments, the two gained invaluable training time together and strengthened their games under the same roof.

“We were always involved with each other in some way, working out in the summer as well at the National Training Center with Canada Basketball,” Djuricic said. “So I was always in touch with him.”

It was right around the conclusion of the 2018 U-17 Tournament — in which Canada finished fourth — when assistant coach Brian Eskildsen began talking with Sakota. Already selected onto the gold-standard BioSteel All-Canadian team, Sakota noted that his longtime friend “helped push [Harvard] up a little bit and helped me commit.”

“[Luka] always thought that me being at Harvard was a huge deal,” Djuricic added. “He wanted to emulate that with his own thing in terms of getting the best education and playing high level basketball as well. So I think the recruiting part was easy.”

Fast forward a year later, and the two are already each contributing important minutes to the Crimson as it seeks to return to the NCAA Tournament for the first time since 2015. Djuricic continues to serve as a versatile forward who can stretch the floor and attack inside, making a name for himself with his proclivity for put-back dunks. Sakota can similarly play multiple positions and has shown success both from deep and at the rim.

Outside of the court, the Canadian connection remains strong for the duo and Ottawa native Noah Kirkwood. Luka noted that he still plays with a “chip on his shoulder” from his AAU days competing against American teams who always discounted the team’s talent, while Danilo commented on how the shared “outsider” status created a valuable chain of mentorship that has helped the three adjust to life in the States.

As the team embarks on this special leg of the non-conference season to play Buffalo in ‘The Six’, there will be no lack of jokes or references to Toronto slang amongst the squad. But this will certainly be an even more special homecoming for the two who grew up in the shadows of Scotiabank Arena and will now take the court together as teammates.