In Pair of Losses on the Road, Women's Basketball Gives Up Undefeated Record 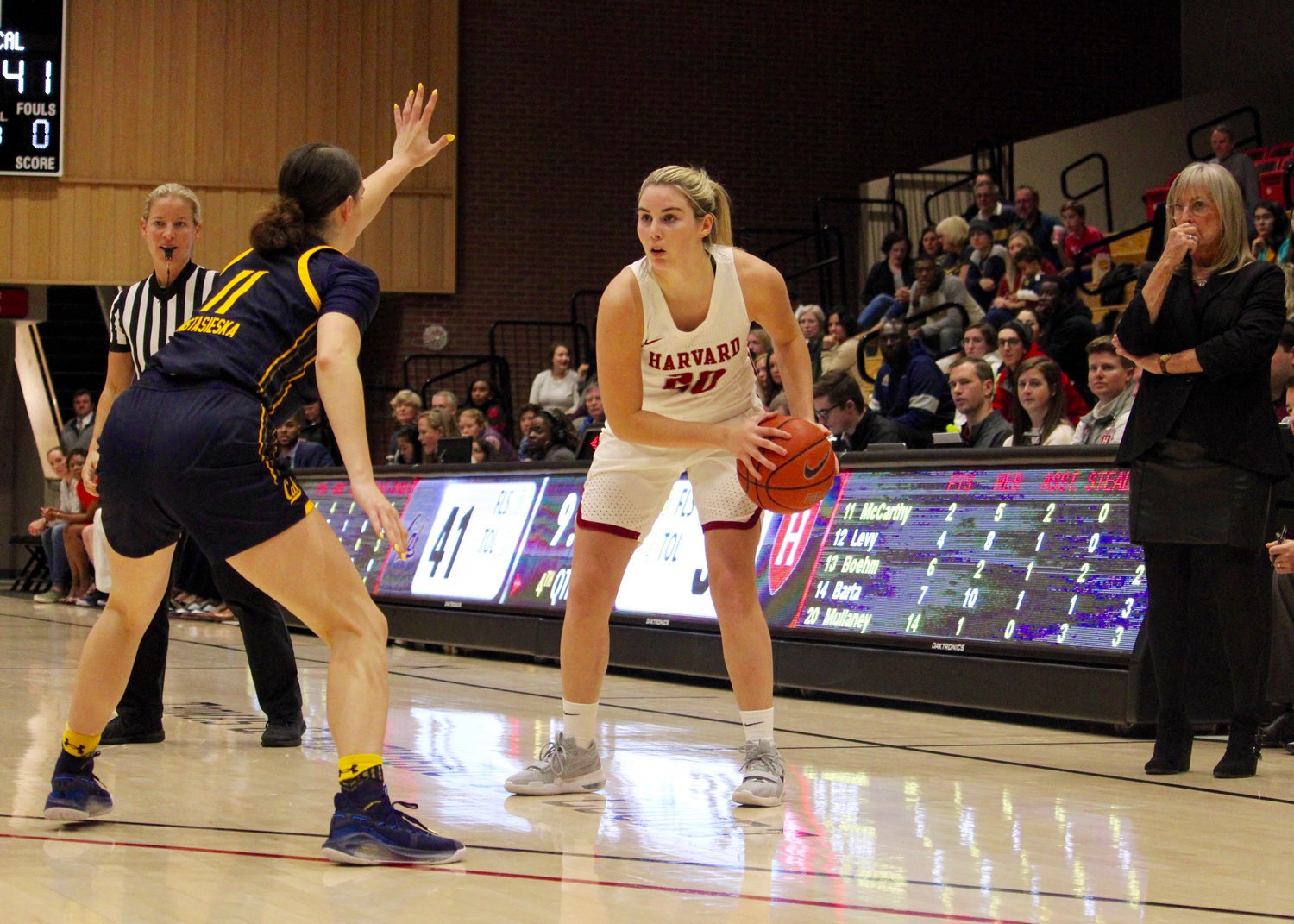 First-year Lola Mullaney returned back to action for the Crimson after suffering an ankle injury against Cal on Nov. 9. By Henry Zhu
By Ema R. Schumer, Crimson Staff Writer

On the road this past weekend, Harvard lost both of its contests, blowing a 14 point lead against the La Salle Explorers on Friday and falling to the Rutgers Scarlet Knights by more than twenty-points on Sunday. Though the Crimson staked out leads early on in both contests, Harvard was ultimately unable to weather the storm of vengeful competitors who turned up their defensive pressure against the young team.

To start the game, the Crimson put on a blazing hot offensive performance, connecting in the paint and from the perimeter alike. Harvard’s dominant offense, paired with a slew of early turnovers by the Scarlet Knights, propelled the Crimson to a 16-8 lead.

Harvard’s offense, however, was ultimately no match to Rutgers’s defense, currently the fourth best in the nation.

The Scarlet Knights went into a full court press to stymie the Crimson’s momentum. As soon as Rutgers upped its defensive pressure, the Crimson crumbled. Taller and more athletic than the Crimson, Rutgers forced Harvard to commit numerous turnovers attempting to break the press. The Scarlet Knights translated these steals on defense into effortless fast break layups.

Much of the game looked like a broken record. A Harvard turnover in the backcourt followed by a fastbreak layup by Rutgers occurred on loop throughout the game. Harvard was not able to comfortably break the press until the fourth quarter. By then, it was too little too late.

Coach Kathy Delaney-Smith did not blame her players, who she said were “giant underdogs” going up against a highly athletic team of veterans.

“I was proud at how we competed and went at them,” Delaney-Smith said. “But we turned the ball over way too many times against that pressure. We just didn’t have enough experience under those pressure situations to feel a little more comfortable.”

Harvard never found the offensive rhythm that it lost in the first quarter. Though Harvard’s success on offense in its first games stemmed from good ball movement, most of the team’s points against Rutgers came from isolated offensive plays. Freshman guard Lola Mullaney, who returned to the starting lineup on Sunday after missing two games due to an ankle injury, kept Harvard’s deficit from ballooning. Mullaney led scoring for Harvard with 17 points, including five triples.

“It’s awesome that she got to come in and immediately contribute to the team, which is what we needed,” Levy said. “She’s a great player. We need her confidence and we love her confidence on the court. It’s good to have her in the game.”

Slow starts are not one of Harvard’s problems. Against La Salle on Friday night, the Crimson ended the first ten minute quarter with 26 points, while the Explorers only scored 18.

Levy fueled Harvard’s offense, contributing nine points in the first quarter en route to a career-high, 20-point performance. Levy’s points came from all over the court: in the paint, mid range, and behind the arc. The Boca Raton, Fla. native also grabbed 13 boards.

“Before every game, [I am] learning to get excited for the sake of playing the sport that I love,” Levy said. “[I keep] in mind every time I step onto the court that this could be the last game I ever play, so I want to make sure I give it my all...It felt awesome.”

Senior guard Mackenzie Barta complemented her fellow captain’s performance in the second quarter. Barta scored half of the Crimson’s points in that quarter, including back-to-back three pointers. A three pointer by Levy at the buzzer signalling halftime put Harvard up by 14 points, its biggest lead of the night.

Harvard did not hold onto its lead for long. To start the second half, La Salle went on a 12-0 run to bring the game within one basket.

Newfound intensity on defense motivated La Salle’s comeback. By double teaming the ball, the Explorers frazzled Harvard players and forced them to commit turnovers. In the second half alone, the Crimson committed 18 turnovers. When La Salle players got possession of the ball, they stepped on the gas and raced up the court, sending Harvard players backpedalling hopelessly as the Explorers scored points in transition.

La Salle’s strength in numbers allowed the team to maintain this level of intensity that Harvard’s limited lineup proved unable to match. Only six Crimson players logged playing time exceeding ten minutes, in contrast, to the Explorer’s ten players. La Salle capitalized on substitutions, at times replacing its entire lineup on the floor with reserves. The Explorers’s bench contributed 49 points to the team’s winning effort. In contrast, only two of Harvard’s points came from the bench.

One takeaway from Friday’s loss for Harvard is that players must focus more of their attention on transition defense.

“We were falling asleep on our transition defense,” Levy said. “I wouldn’t blame it on our lungs. We were just losing our girls in transition…It cost us a lot of points [but] that’s an easy fix. We just have to keep it in mind.”

The young Crimson team hopes to turn this pair of losses into learning opportunities. It will return home to face off against Hartford at 6 p.m. on Friday.