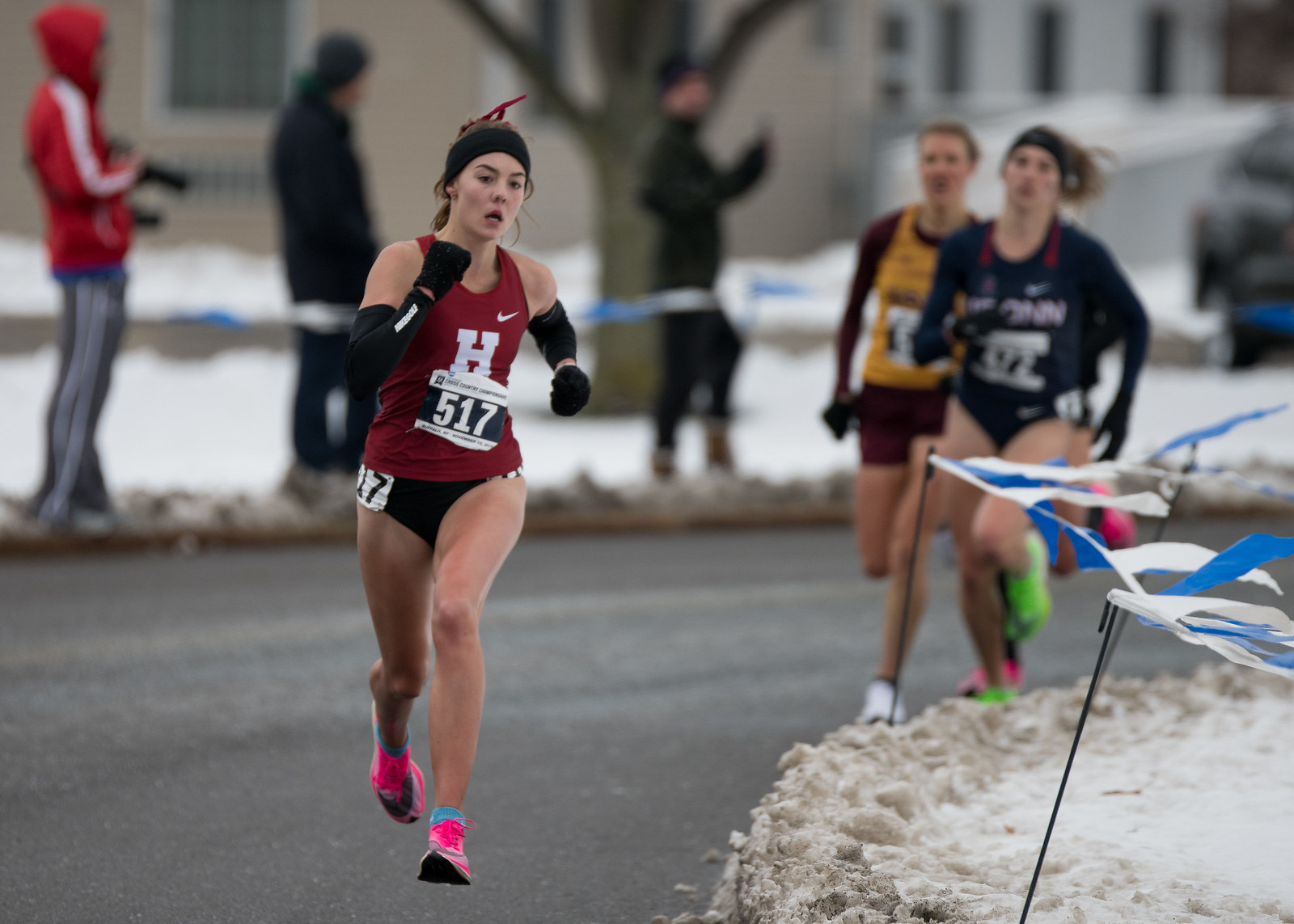 Anna Juul led the pack for the Crimson at Regionals. By Courtesy of Svenne Juul
By William Connaughton, Crimson Staff Writer

Following a strong performance by at the Ivy League Championships with a pair of second place finishes, the Harvard men’s and women’s cross country teams did one better at the regionals meet, breaking Crimson records along the way.

Both teams placed first in their respective regional meets, upsetting multiple ranked opponents. This performance from the program as a whole marked the first time either team has won NCAA regionals and the first time both teams have qualified for NCAA nationals in the same year.

However, no upset victory is without a little bit of luck. The races were initially slated to take place on a golf course in Buffalo, New York, setting up for a very traditional cross country race.

Earlier last week, however, nine inches of heavy snow fell. This snowfall set a 77-year record for the most all-time on November 11th in Buffalo. As a result, the meet changed locations just days before the race to a road course on the campus of Buffalo University, altering the outlook of the race dramatically.

Traditionally, cross country racers wear very thin shoes with long metal spikes on the sole called racing spikes. These spikes allow the runner to gain traction on rough terrain while also being light and flexible enough to maximize speed. Runners are often very used to racing in these shoes as most courses are on some variation of grass and dirt. However, racing spikes cannot be used on the road as the spikes themselves cannot penetrate the concrete.

“I think the move to the roads due to unrunnable golf course conditions, ice boulders in the grass, and ice sheets all over rattled a lot of other teams, but everyone on our team approached the change really well and were actually excited about it,” commented co-captain Gillian Meeks on the change of venue. “It got rid of a lot of variables with a really tough course and we could just go out there and show our fitness.”

On the men’s side, senior and second place finisher Kieran Tuntivate echoed a similar sentiment about the course change.

“It was a lot of fun when they changed to the roads in my opinion,” Tuntivate said, “It was a spectacle that we’ll probably never get to experience again.”

The Harvard women entered the meet projected in fifth, coming off an upset finish through a sixth-runner tiebreak in the Ivy League Championships to capture second place. The first place finisher in that meet, No. 21 Columbia, and a fellow ranked opponent, No. 29 Syracuse, were projected to finish higher than the Crimson women.

Led by a stellar solo effort by junior Anna Juul who placed second with a time of 19:31.3 in a race of over 266 competitors, the Harvard women surprised again on the 6k course.

As has been the tale for most of the season, the Crimson had a strong pack of four behind its front-runner Anna Juul who were key in keeping point totals low in a meet with over 37 schools. Behind Juul, Meeks placed 18th, junior Judy Pendergast placed 22nd, first-year Isabell Sagar placed 24th, and junior Brooke Starn placed 26th. This pack was separated by a mere 17 seconds.

“The girls were all super assertive getting out at the start of the race,” said Meeks about the race strategy. “The top five were all right together right in the front pack. We just hung on to the front pack while being blocked from the wind and then gutted it out the last 2k.”

As a result, the Harvard point total stood at 92 points, blowing second-place Cornell out of the water by over 34 points. The ranked Lions and Orange finished in fourth and fifth respectively, and only Columbia ended up qualifying for nationals.

For their strong efforts, the Crimson women had four selections for all-regional performers. These four were Juul, Meeks, Pendergast, and Sagar with Starn just missing the top-25 cut at 26th. As the meets grow even bigger in size, this cohesive Harvard pack is proving to be a tough out, a huge asset for the team come nationals.

On the men’s side there was arguably even greater dominance. Coming into the race, the Crimson men were projected in fourth. They were facing off against No. 18 Syracuse and No. 8 Iona, both very strong teams that were near guarantees for nationals. 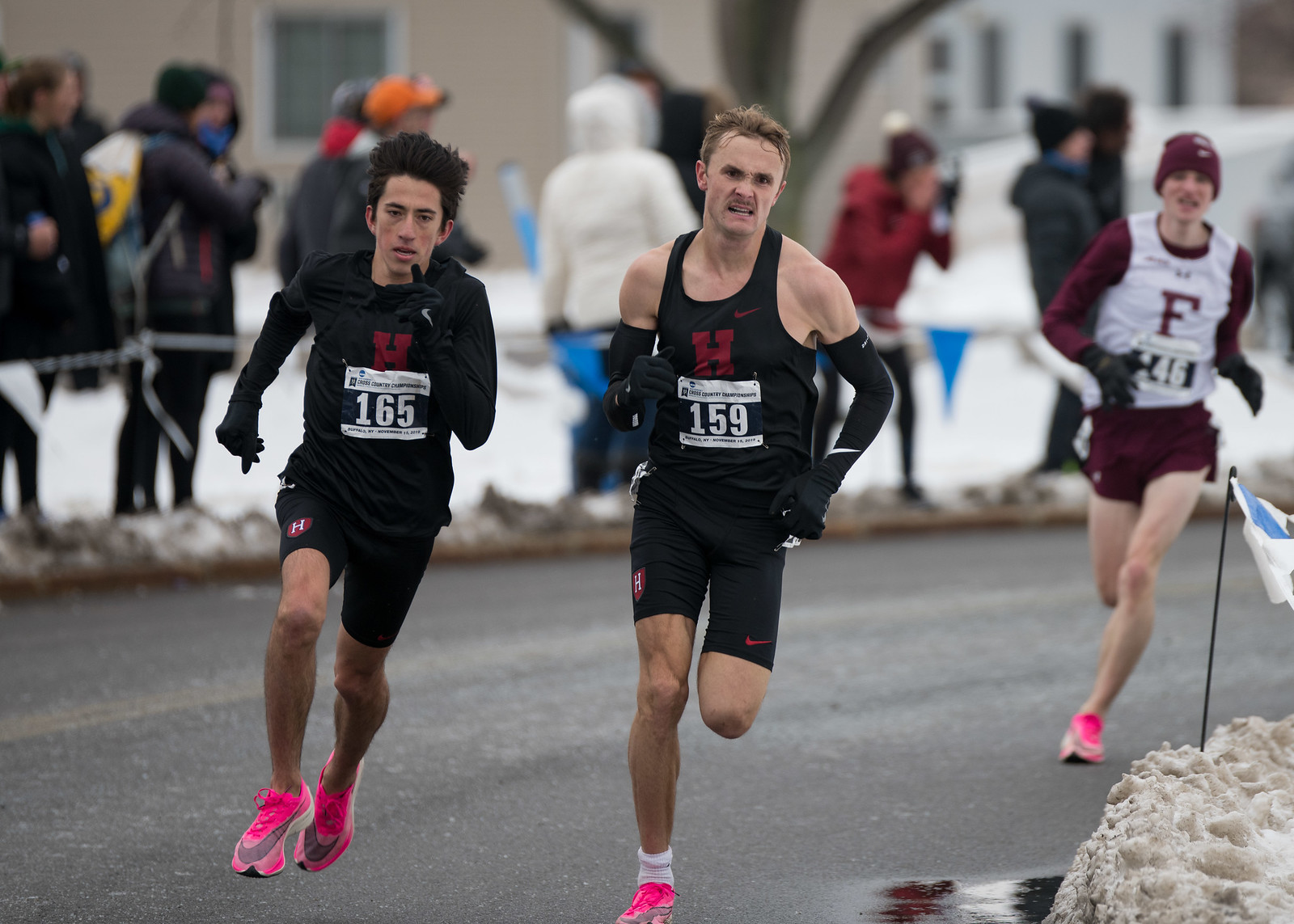 The Crimson men also finished the highest among Ivy League competitors. By Courtesy of Svenne Juul

Healthy and coming off a strong week of training, the men finally had the legs under them to run their best race, and the results showed. The Harvard men captured three of the top five spots.

“I’ve never seen a Harvard team pull it together like that at regionals since I’ve been here. It was inspiring,” Tuntivate said. “Especially when I had Bill [Battershill] next to me at the finish line and Colin [Baker] in 5th. Having Harvard finish 2-3-5 was wild. Bill and I are both seniors now and I’m glad we have one more race together in the Crimson uniform.”

To finish out the scorers for the Crimson, junior Matthew Pereira continued his steady scoring season placing in 20th with a time of 29:20.6. This placement beat the third place runner for runner-up Iona, a huge win for the Harvard men. Lastly, junior Hugo Milner placed in 29th followed close behind by sophomore David Melville in 31st. This total of 59 points put the Havard men comfortably in front of the ranked Syracuse and Iona squads.

The Crimson men also had four all-Regional performers as Tuntivate, Battershill, Baker and Pereira were all selected. This brought the Harvard cross-program total to eight, the most out of any program on Friday.

The now No. 23 Harvard men’s team and No. 25 Harvard women’s team will have the chance to compete in the nationals meet of 31 schools in Terre Haute, Indiana next Saturday, Nov. 23.

Competing against some of the best runners in the country, the Crimson will have yet another opportunity to prove the rankings wrong and bookend its highly successful season.