Excluding ourselves from the present situation, with The Game but heartbeats away, it is pertinent to consider why it is that these two schools even meet on the gridiron once a year.
By Cade Palmer 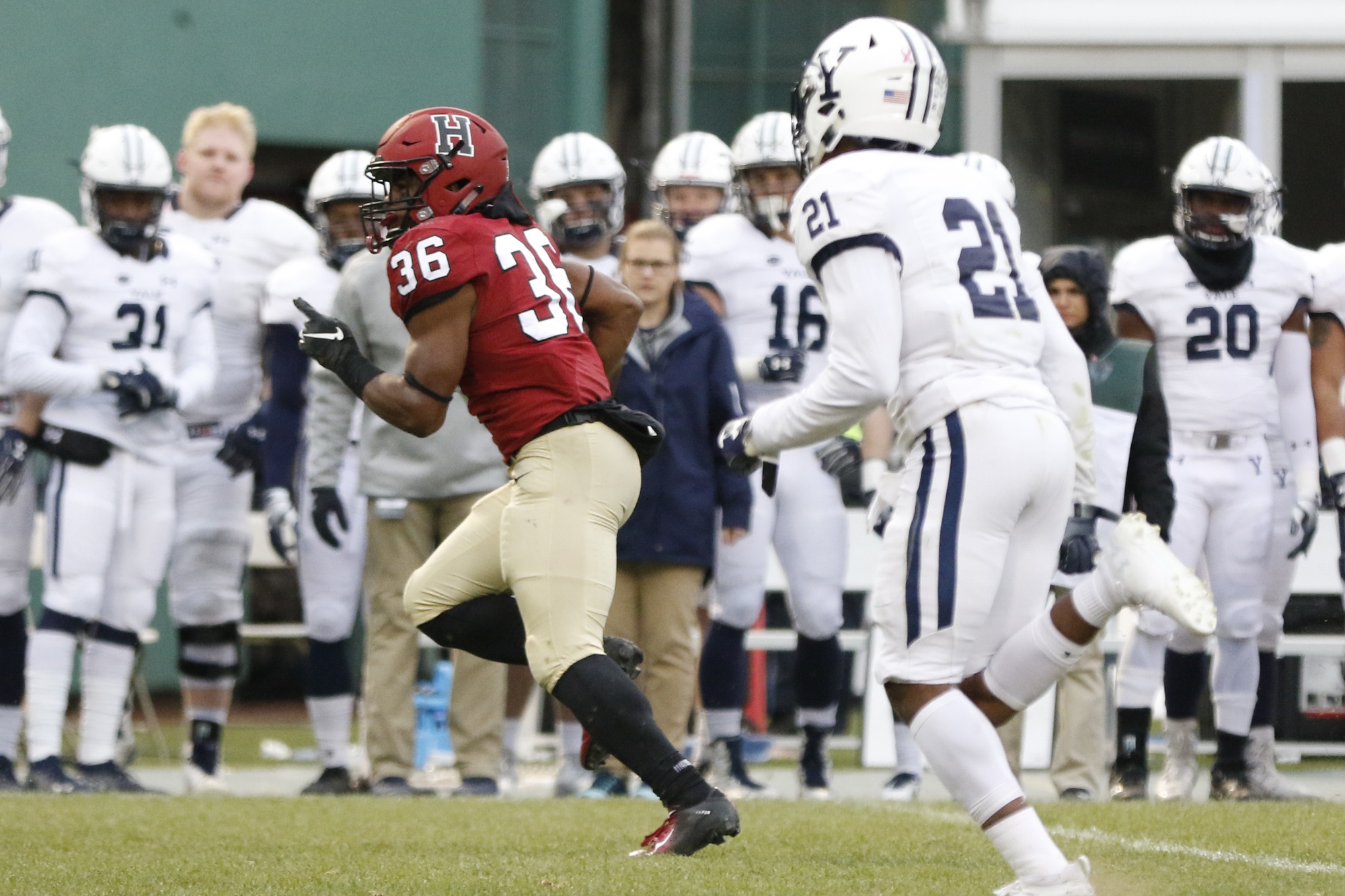 Harvard can finish no better than fourth to conclude the season. By Timothy R. O'Meara

Excluding ourselves from the present situation, with The Game but heartbeats away, it is pertinent to consider why it is that these two schools even meet on the gridiron once a year. Pride is the answer one receives at an inquiry of coaches, players, and alumni representing the respective institutions. Some others might attribute the annual meeting to the chance occasion of the two schools being chartered in a similar era amongst seven other colonial colleges, earning their respective spots in the Ivy League. This is of course true. Even though the Ivy League wasn’t formed officially until the middle of the 20th century, a yearly meeting between the two squads would be made more difficult by a difference of conferences. I, however, propose a different answer to the motivations behind The Game. Not one to abandon useless traditions, Harvard tolerates its antiquated rival; but Yale — Yale needs Harvard.

Divorced from the rest of society in the gothically adulterated city of New Haven, Yale finds itself with little advantages to market to potential students. In the middle of Connecticut, with no real city within an accessible distance, prospective Yale students must consent to a four-year sequestration from society in order to complete their undergraduate education. Despite this isolation, Yale manages to recruit a sizable amount of candidates (albeit it does accept a whopping 6.3 percent). No rational person can hope to explain this away with the supposed might of the Yale undergraduate academia. Take as proof the Economist’s college rankings which list Yale as number 1270 out of 1275 colleges.

Keeping Yale relevant, however, is one thing: its rivalry with Harvard. In naming it a rivalry, we are fundamentally engaging in a fallacy, as in every conceivable measure Harvard beats Yale. Look to the seat of government where Harvard boasts more presidents, legislators and Supreme Court justices. Look to Rhodes Scholars, Nobel Prizes, Ivy League titles, acceptance rates, projected income, name recognition, endowment, size of the library, and the discrepancy in the institutional robustness becomes abundantly clear.

Harvard is to Yale as a horse is to a cart. In the absence of the horse, the cart would still exist, it would just not travel very far from its position at the middle of the collegiate rankings. Moving Yale into higher prestige is the yearly tradition of The Game for which Yale students might pretend for one fleeting moment that they exert even an iota of superiority over Harvard. Such a scenario supposes, of course, the occasion of a Bulldog victory. Except an occasion such as this has rarely occurred of late. Long is the history between the two teams in which Harvard can claim not only the longest win streak of the rivalry, but victory in 10 of the last 12 meetings. Failure, it would seem, is endemic to this institution of “higher” learning.

Athletics is but one area of many where Yale can be found wanting.

Yale’s history of riding the coat-tails of its superior institution in Cambridge is nearly more prolific than the institution itself. Absent the work of Cotton Mather, a Harvard College graduate, Yale would’ve never secured the essential donation from the man for which it is named, Elihu Yale. Lest we forget, Yale, the man, achieved this great wealth which he so generously donated through his position as President of the East India Company, a position from which he was relieved due to corruption. Even it’s motto, Lux et Veritas (Light and Truth) is an unoriginal conception, attributable to Harvard’s, Veritas.

Greatness can hardly be believed to have even been a concern of Yale. Renown among commentators of the Ivy League is a certain unfortunate series of incidents in which a Yale student took to relieving himself in the laundry of fellow classmates. Appropriately dubbed the “poopetrator,” the student can’t be faulted, really. Defecation is just carrying out Yale’s reverence for being the number two of the Ivy League to its logical conclusion.

Defeat is inevitable for Yale this weekend. In its very formation, Yale is betrayed as second best and the product of Harvard minds. During this weekend’s contest, the Bulldogs, as is tradition, will again fall prey to Harvard mind and muscle.

It matters not. The Game is but a formality through which Yale may again regain relevancy, just in time for regular decision applications.