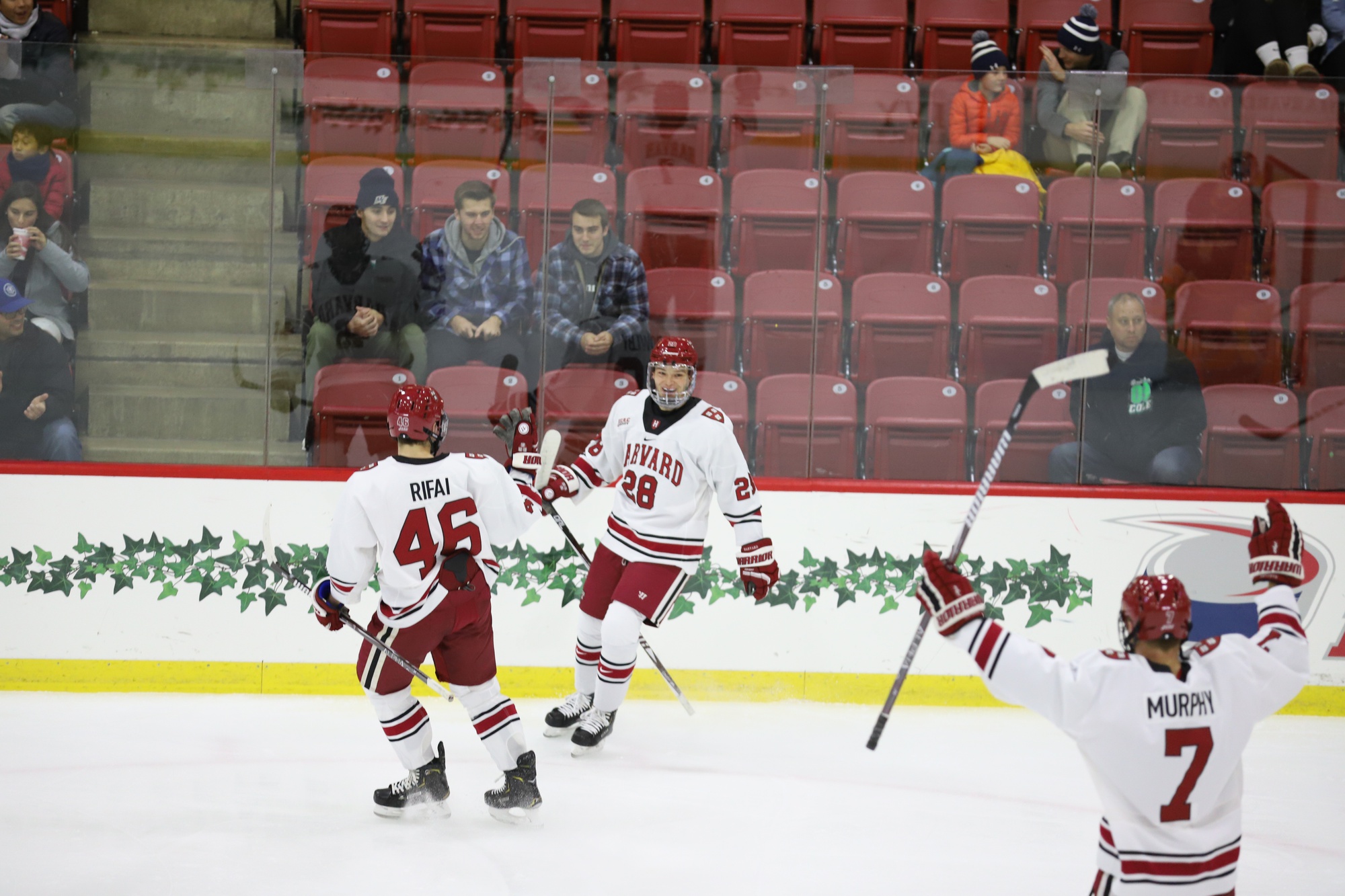 Though the Crimson has had goal-scorers up and down the lineup, regular contributors like junior Henry Bowlby, who is on a five-game point streak, bolster the team's offensive power. By Timothy R. O'Meara
By Stuti R. Telidevara, Crimson Staff Writer

TROY, N.Y. — The No. 10/8 Harvard men’s hockey team took a rare one-night road trip to face RPI on Friday night in search of another two points to keep its season-long winning streak alive. The Engineers’ sub-.500 record belied their decent offensive efforts so far this season; for its part, the Crimson had yet to face a team that found a way to capitalize on its mistakes.

Friday’s contest proved to be the closest one Harvard (6-0-0, 6-0 ECAC) has fought in so far this year, as RPI’s (4-6-1, 2-4-1) own timely goal-scoring punished the Crimson’s missteps. Nevertheless, a shutdown goaltending show in relief from senior Cameron Gornet and a hat trick from sophomore forward Casey Dornbach put the visitors past the Engineers by a score of 6-3.

“[We’re] happy to get the win in a...tough place to play on the road,” head coach Ted Donato ’91 said. “I thought it was a very tightly-contested game all the way into the third.”

Harvard’s high-energy start featured a goal in the first minute of play, as junior defenseman Reilly Walsh fired a shot from the left point that was tipped in front by junior forward Henry Bowlby. The tally extends Bowlby’s point streak to five games. Soon after, Dornbach turned on the jets for an unsuccessful breakaway attempt, which earned him a penalty shot.

Dornbach made no mistake, shooting right past RPI sophomore net-minder Owen Savory — the program’s first penalty shot goal since one scored by Dominic Moore ’03 back in 2002. The Crimson was now leading by two goals before the halfway mark of the first period.

But the Engineers had more to give. The first response came from rookie blue-liner Cory Babichuk, whose point shot trickled through Harvard freshman goaltender Mitchell Gibson for his first career goal. The Crimson had led in shots for the first few minutes of the period; now RPI found its momentum.

It wasn’t long before the hosts were rewarded once again. A giveaway by the wall in Harvard’s zone saw the puck make its way to senior forward Chase Zieky, unwatched, near the blue paint. Gibson had no chance on Zieky’s shot, and just like that, the game was tied.

“I thought we came out of the gates early and were really skating and making plays and were up 2-0,” coach Donato said. “And we had several chances — good chances — to make it 3-0, but RPI really battled and got back to 2-2.”

The rest of the period seemed as though it would proceed with the teams knotted, 2-2. The Crimson had its first man-advantage chance but was unable to make much of it. With less than two minutes to go, however, an unlikely backhand attempt from sophomore forward Baker Shore — as Shore was in the low slot, watched by three Engineer skaters — beat Savory. Once again, the visitors had retaken the lead. 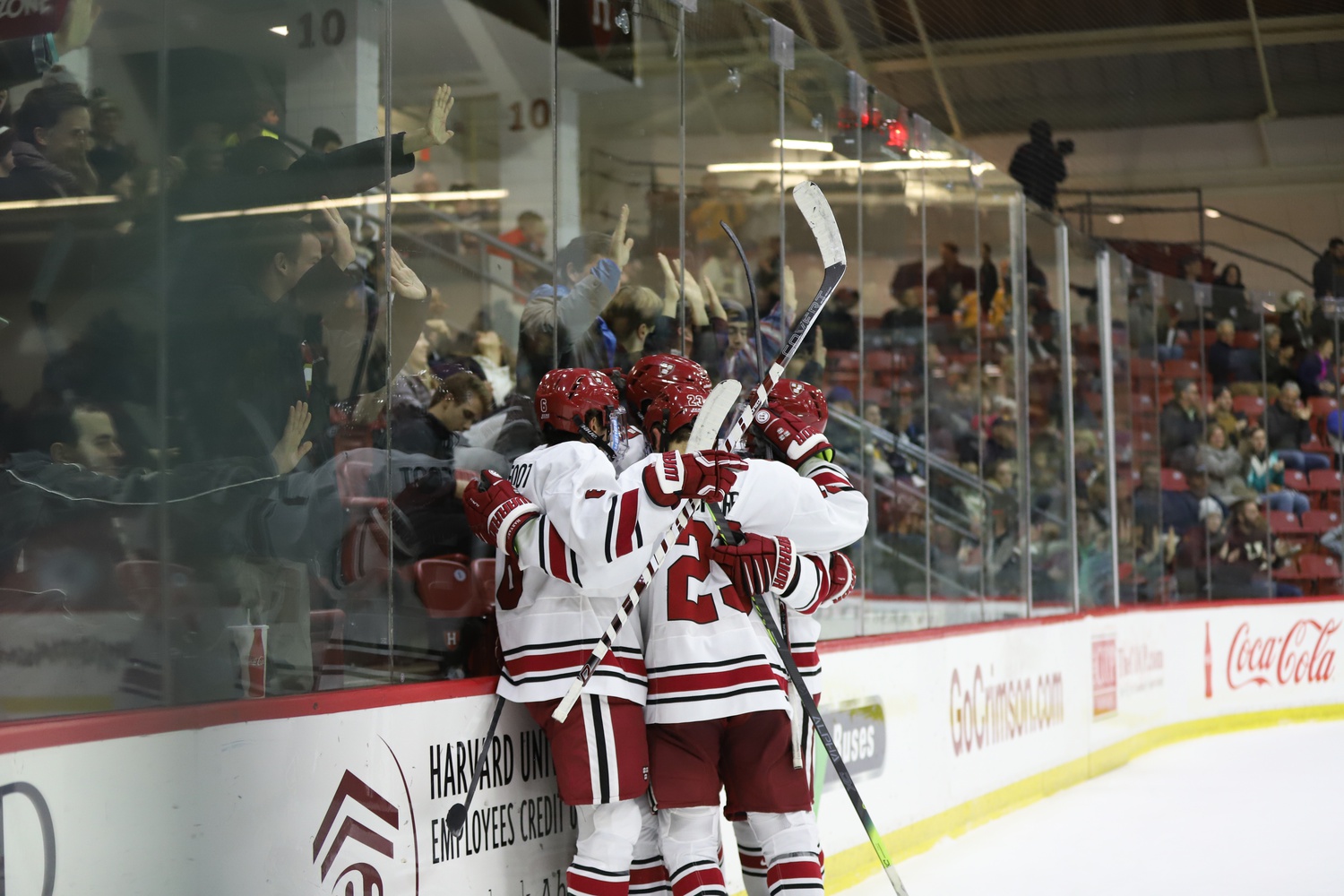 Harvard's sixth straight win makes it the ECAC leader, and one of two unbeaten teams in the country. By Timothy R. O'Meara

The second period began with more RPI pressure; Gibson, who has been excellent in his young collegiate career, was forced to make several strong saves to preserve Harvard’s lead. But one of those in-close stops seemed to cause the net-minder some discomfort. Gibson stayed down for a few minutes before skating off with assistance. Though Gibson would later return to the bench in his equipment, senior Cameron Gornet took his place between the pipes for the rest of the night.

“It looked like [Gibson] tweaked something,” coach Donato said. “I don’t think it’s of the major variety, but…agility and flexibility is such a key factor. He wasn’t able to play at the same level and we were able to get him out of there. We’ll get him back to Harvard and hopefully we can reevaluate.”

More misfortune lay in store for the Crimson. On the rush, Engineers sophomore forward Ture Linden took a shot from the right circle, looking for senior linemate Todd Burgess by the side of the net. Gornet’s sliding save kept out Linden’s initial shot, but Burgess’s attempt skipped over the sprawled net-minder and into the net, evening the score once more.

A flurry of whistles marked the latter half of the middle frame. Neither Harvard nor RPI scored on its first powerplay chances of the period, the Engineers benefiting from 37 seconds of 5-on-3 time as well.

Soon after killing off the 5-on-3, though, the Crimson found itself on the man-advantage; a clean tic-tac-toe play from Walsh to sophomore forward Jack Drury found Dornbach at the front of the net, where he cashed in for his second tally of the evening. Once again, the Crimson left the ice ahead by a goal.

Though the scoreboard was close, the shot count was not. By the start of the third, the Engineers were outshooting Harvard nearly two to one. But the hosts had also never come back from a third-period deficit this season. Gornet looked primed to continue his sharp net-minding. 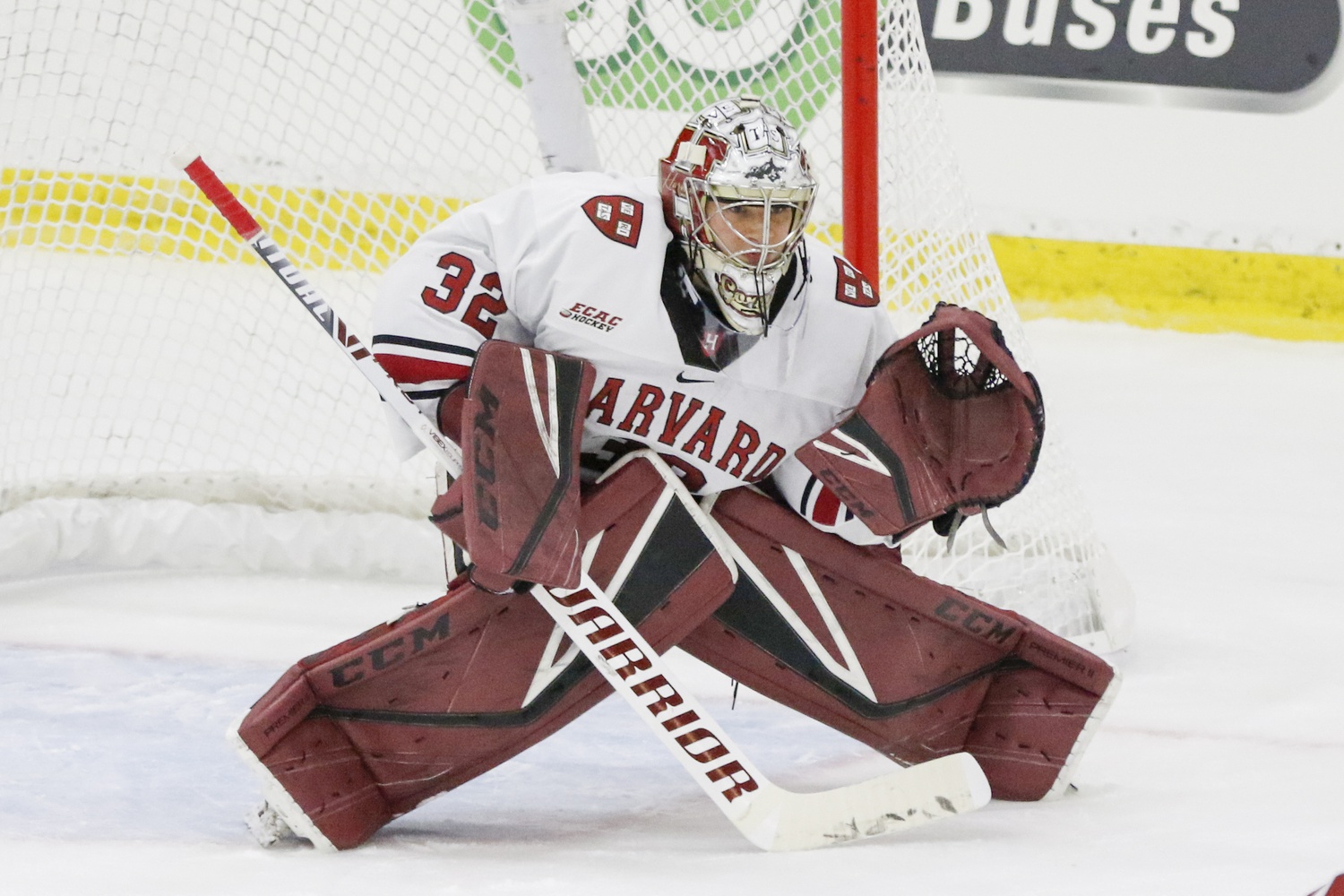 “I thought [Gornet] was very solid,” coach Donato said. “It’s not an easy situation to go into tight games...where you’re outshot quite a bit…. I thought he made the saves that we needed to be able to continue playing with the lead.”

As the Crimson turned up the heat in the offensive zone, winning a puck battle at the near wall, Drury found Dornbach all alone in front of the net. The sophomore put the biscuit in the basket for the third time, earning his first career hat trick.

“I’m fortunate to play with two great players in Nick [Abruzzese] and Jack [Drury],” said Dornbach when asked about his line’s play this season. “We just like having fun. We’re lucky that we have had some early success, but we can keep getting better, and there’s still a long way to go.”

Harvard, holding onto its first two-goal lead since the very start of the game, had the last word, as senior forward Frederic Gregoire stole the puck in the RPI zone for a neat backhander, his first of the season. The 6-3 result marks the fourth time this season the Crimson has put six or more goals on its opponents.

The squad leads the country in goals per game (5.50), has outscored foes 33-10, and along with No. 2 Cornell, is one of the nation’s only remaining unbeaten teams. Harvard’s offensive chemistry is undeniable.

“There’s depth up front,” coach Donato said. “We have four lines that feel like they can contribute offensively…. That depth definitely gives us some confidence. We know as the season goes on that it’s going to be tougher and tougher to score, but for us it’s about the process.”

“Hopefully we’ll adjust to this as the season goes on, but we’re not a team that just throws a lot of pucks at the net,” coach Donato said. “It seems to be something that’s working at this point, but defensively we’d like to make sure that we are establishing a little more offensive zone time so that we don’t have to give up as many shots as we have been giving up.”

The biggest tests in that respect are forthcoming in the next two weeks. The Friday after Thanksgiving, Harvard faces its first out-of-conference opponent, No. 14/12 Boston College, a group currently on its own five-game win streak. Then the Crimson plays host to longtime rival Cornell in a clash of the ECAC leaders. Whether or not Harvard can keep up its tear remains to be seen.