Men's Basketball Falls Short In Upset Effort Over No. 5 Maryland, 80-73 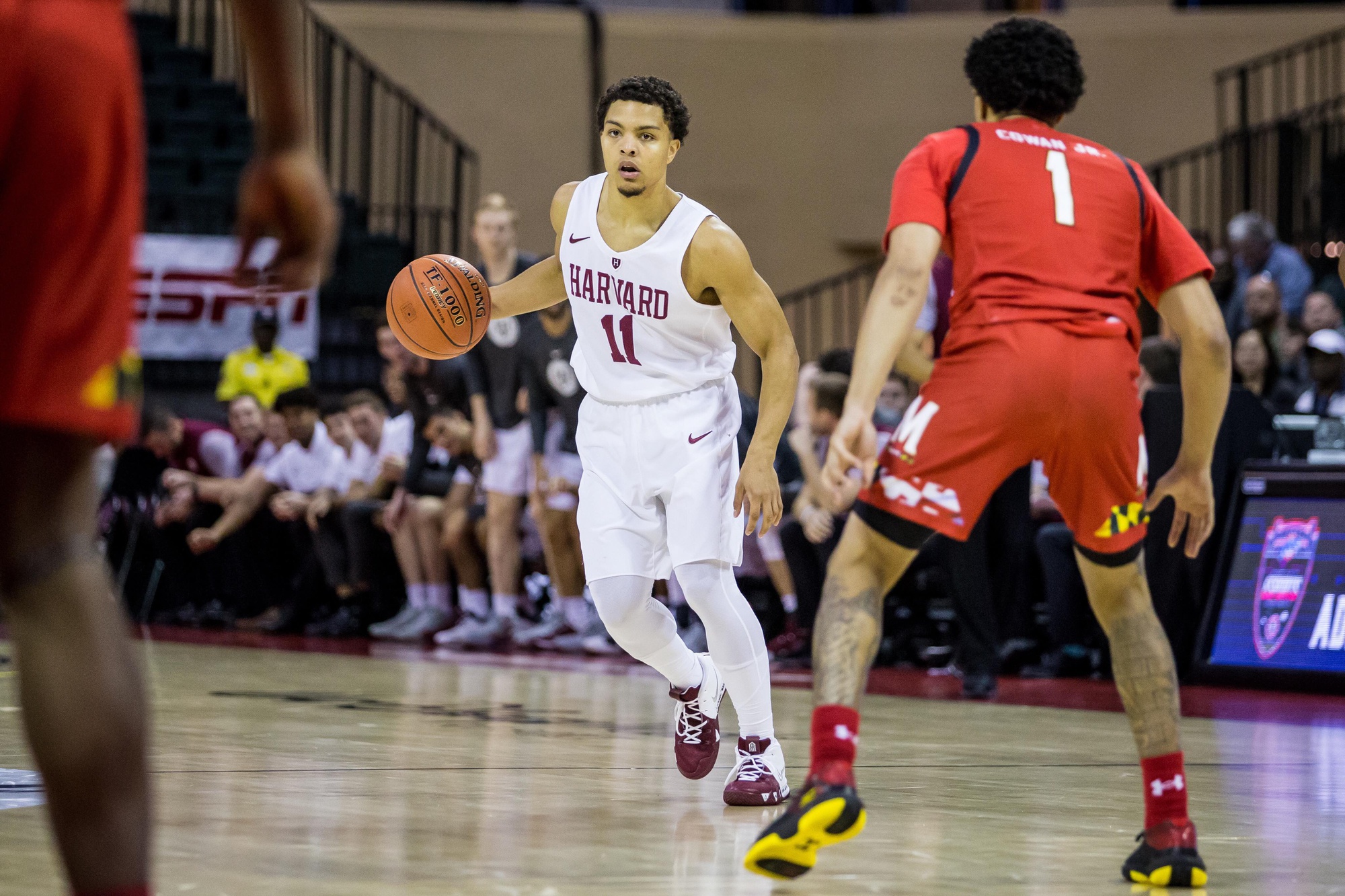 Bryce Aiken scored 30 points in the loss to the Terps. By Courtesy of Mary Holt/Harvard Athletics
By Henry Zhu, Crimson Staff Writer

ORLANDO, FL. — The Crimson flirted with a program-defining upset, but the No. 5 Terps and its forceful supporters shifted the tide on its side heading into halftime and carried that momentum to a 80-73 win Friday afternoon.

Harvard jumped to as much as an 11-point lead heading into the final five minutes of the first half — including a 9-0 start to the contest — but saw that margin gradually diminish heading into intermission. Still-undefeated Maryland (7-0) took its first lead within three minutes of the second frame, and although the Aiken-led Crimson continued to fight tooth-and-nail, it could not withstand a 10-point spurt from Terps lead scorer Anthony Cowan that pulled the game away for Maryland.

Clearly outsized, the Crimson were outrebounded by its opponents 44-29, including allowing 15 offensive boards. Outside of Aiken’s 30 points, the Crimson did see double-digit performances from both senior forward Chris Lewis and sophomore guard Noah Kirkwood but allowed five Terps to do the same. Maryland guards Aaron Wiggins, Darryl Morsell, and Eric Ayala combined for 39 points to complement Cowan’s 20 and imposing big man Jalen Smith’s 15.

“[Maryland] is incredibly long and athletic on the backboard, and I thought that was the biggest key and difference in the game,” coach Tommy Amaker said. “We knew that coming in, easier said than done in trying to talk about making that an area where we wouldn’t get beaten by...It was too much for us to defend but I was proud of our guys for their effort.”

After a quiet performance in the Crimson’s victory over Texas A&M on Thanksgiving, Aiken showed increased confidence in his shot and delivered a bevy of stepback jumpers, long-distance triples, and finishes near the rim in a 10-of-18 game. Harvard (5-3) also depended heavily on Lewis’ interior offensive finesse, but the 6-10 Smith hampered numerous opportunities at attacking the basket for the big men and other Crimson players.

“Bryce can score with the best of them, no doubt about it,” Amaker said. “He had a pretty efficient offensive game here but he can be better than that, especially in certain areas in quarterbacking our team and leading our team. Those are areas we need him to embrace a little bit more, but certainly his scoring production is always something that we rely on.”

Maryland brought out a considerable supporting section, making the game feel closer to being in College Park than in “neutral” Orlando. The Crimson last played in such a vociferous environment in the NIT Second Round on the road against NC State, but such an atmosphere did not significantly faze the well-tested team, according to senior Justin Bassey.

“We are a veteran team and have a lot of older guys,” Bassey said. “There is nothing that we haven’t been through before so it’s nice for the younger guys to get some of the Ivy League experience, tournament-play experience under their belt. But nothing unexpected for a lot of our older guys.”

Terps coach Mark Turgeon praised the Crimson’s performance today, but stated that his team’s languish start was due to a lack of energy.

“I think Harvard will win 20+ games this year and have a chance to be an NCAA Tournament team,” Turgeon stated. “I thought yesterday we have energy, today we had nothing. We’re a rah-rah team in the dressing room, a rah-rah team when we’re stretching.”

In that early spurts, the Crimson held Turgeon’s side scoreless until the 15:40 mark, and forced 10 Maryland turnovers within the initial ten minutes. Harvard showed a mix of interior forcefulness through Lewis and benefited from triples by senior Rob Baker and Aiken, while frustrating the Terps to an early 3-of-11 shooting night on the field.

But Maryland began to narrow the margin back to one possession as Turgeon began to push his players to attack the paint more aggressively. In the final four minutes before halftime, the lone offensive contribution from the Crimson was two Aiken free throws in the final four minutes before a late drive-in layup from the guard and two last-second Bassey free throws salvaged a four-point lead heading into halftime. The momentum, however, still was very much on the side of the Terps.

Harvard succumbed to a Maryland run to start the second frame, relinquishing its lead. But a wide-open Kirkwood triple and two Lewis hook shots returned the halftime margin back to four and another deep Aiken extended the margin to seven at the 14:15 mark. With lead scorer Anthony Cowan on the bench due to foul trouble, the Crimson appeared prime for an extended run.

But the Terps held their ground, holding the margin to no more than two possessions. Despite strong finishes at the baskett from Ledlum and Haskett, the Crimson saw its margin evaporate as Cowan began to catch fire. Knocking down 10 points in a two-minute span, Cowan brought the Terps back on top at the 9:26 mark.

Heading down to the last five minutes of action, however, Maryland began to pick up steam with Lewis on the bench in foul trouble, sprinting out to a 7-1 run and extending its lead to six, its largest of the game. Another Wiggins three from the corner brought the margin to seven, and the Crimson could not bring it any closer than six to conclude the contest.

“The key word for me, and I think all good teams have this is balance,” said Amaker on the Terps talented side. “I think they have a lot of pieces to the puzzle.”

“Their team across the board, wings and bigs, showed incredible effort on the board,” Bassey added. “That’s probably something we could have done a better job of.”

Harvard now has one more game in the Orlando Invitational on Sunday, facing the loser of Marquette and USC for the third place game. The game will be at Sunday at 6pm and televised nationally on ESPN2. Tested by another top-tier program, the Crimson will have one more chance at making a statement on a national stage.