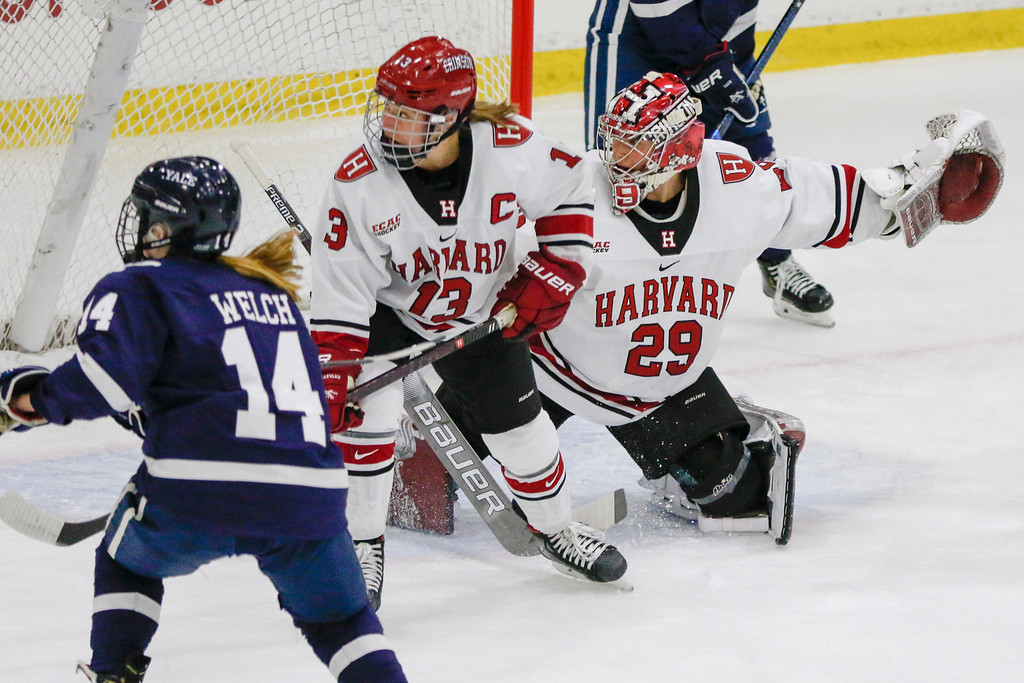 “I found myself in front of the net,” Hyland said. “Ali Peper took a great shot from the point and I was able to get a stick on it in front and it tipped back in the net. It was an awesome experience having my first goal in a Harvard jersey.”

The Crimson went into the game hoping to build off its success in previous games.

“We really liked how we played against Brown,” junior Becca Gilmore said. “So [today we focused on] keeping the momentum and scoring more goals.”

Harvard succeeded in pairing accurate passing with strong stickhandling to maintain momentum during lengthy possessions. The Crimson dominated in the first period, outshooting Yale 12-5, though the Bulldogs turned the tide and ended up outshooting Harvard 30-27 by the end of the game.

Crimson goaltender sophomore Lindsay Reed recorded 28 saves, including an impressive glove snag in the third period. Becca Gilmore scored twice for Harvard, each goal assisted by Captain Kat Hughes. The first goal came on a breakaway at 0:55 in the second period.

“Throughout the past two games Kat Hughes, [Anne] Bloomer and I have been building a lot of chemistry and Kat was able to feed me the puck on the ice,” Gilmore said. “I had a one-on-zero with the goalie so it was a pretty great feed by Kat.”

Just fifty-five seconds later, junior Kate Glover netted a slapshot from the point to give the Crimson a 3-0 lead. She was assisted by Courtney Hyland and junior Brooke Jovanovich.

However, Yale battled back when sophomore Claire Dalton scored on a top shelf shot 6:33 into the second period. The Bulldogs followed with a power play goal by junior Rebecca Foggia just two minutes later. Foggia controlled her own deflection and snuck past Reid to tighten the score to 3-2. Yale didn’t score again for the rest of the game. The Crimson retook control of the game by converting four power plays into two goals.

“We were working on the power play a lot this week,” Gilmore said. “When you have a man down it’s kind of a great time to capitalize.”

Harvard’s first power play goal came 15:49 into the second, when sophomore Kyra Willoughby lit the lamp again with a wrister from the high slot, shooting the puck directly over the goalie’s head. The second came on a 5-3 power play with 11:42 remaining in the game, when Gilmore netted a one timer top shelf off a pass by Hughes, arcing the puck from the left goalpost to the upper right corner of the net. It was Gilmore’s second score of the day.

“It was a beautiful pass again by Kat Hughes,” Gilmore said.

“We put a big emphasis on getting pucks in the net and not being too fancy but also attacking on two on ones and just creating space for an open person,” Gilmore said.

Hyland also cited “strong leadership from the upperclassmen” in contributing to the win.

Harvard is looking to stay undefeated when it hits the road next weekend to face Princeton and Quinnipiac.