Harvard Looks to Bounce Back Against Columbia 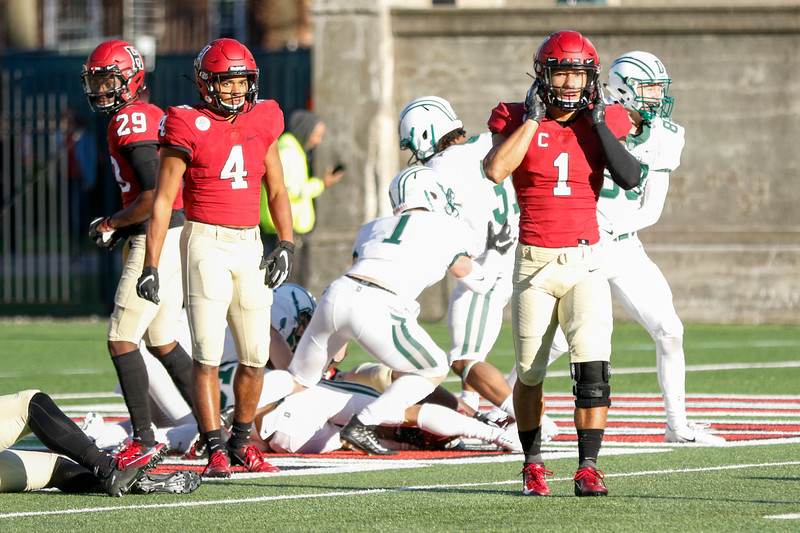 “There's not much solace but in any endeavor in life — something you really pour your heart and soul into — if you've given it everything you possibly can, you have no regrets. The problem is you have plenty of pain. But you can have no regrets.”

These were the words of Harvard coach Tim Murphy following the Crimson’s devastating last-second loss to undefeated Dartmouth last weekend. Playing on home turf, a dominating defensive performance ended in a loss as the Big Green secured a wild Hail Mary as the clock expired. Both squads will be heading to New York this weekend. The Big Apple offers a possible Ivy League crown for Dartmouth and a bounce-back game for Harvard.

“That will be a game that some of us probably won’t forget for a long time,” senior offensive lineman Liam Shanahan said. “You just have to move on, it’s college football season and we have another game this week.”

This weekend, the Crimson hope to bounce back to what Murphy referred to as “one of the absolute historic gut wrenching losses.”

“It's a day by day process, but the leadership has been great,” Murphy said. “This week, the attitude has been great. Now, and now as I said many times, how well we played isn't diminished by loss. It just makes it more painful.”

Harvard’s defense clearly had one of its best performances of the year. Before the final play, the stout Crimson defense had surrendered only three points on 229 yards, highlighted by a stingy run defense that held the Big Green to only 51 yards throughout the entire game for an abysmal 2.0 yards per carry.

If the analysis highlights the strong defensive performance, then the moving on must look relatively positive for Harvard. The Big Green offense that was stymied by the Crimson had not previously failed to top 28 points in a game this season, leading the Ancient Eight heading into last week, and Harvard broke an impressive streak of three-straight games in which the Dartmouth offense topped 40 points. This week’s offensive unit lining up across from the Crimson does not have the same resume.

Last week’s defensive matchup between Harvard and Dartmouth meant points were at a premium. For Columbia’s offense, points have been just as hard to come by this season. The Lions are second-to-last in scoring among Ivy League teams, averaging only 20.4 points per game this season, a full touchdown below the sixth-ranked Penn. Finding the end zone has not been the only offensive problem. Columbia ranks dead last in both rushing and passing yards, setting them well behind the pack offensively. The Lions are the only Ancient Eight team to average less than 340 yards of offense per contest, sitting at a low 271.6 total yards per game.

It is doubtful that the Crimson defense will serve as a remedy to these woes if recent games are any indication. Harvard trails only the powerhouses Princeton and Dartmouth in yards allowed this season, and the Crimson’s defensive front paces the Ancient Eight. Harvard has allowed a miniscule 499 yards rushing this year, easily tops in the conference, as the next best rushing defense in Princeton has allowed 675 yards. Columbia is the only team averaging less than 100 rushing yards per contest, making for a difficult ground matchup for the Lions.

This is not to say that there will be another single-digit scoreboard this weekend. While the Columbia offense has struggled throughout the season, it has still shown an ability to put points on the board. Just two weeks ago, the Lions dismantled Penn 44-6 in a dominating performance. While its drubbing of Penn gave hope to a turnaround, Columbia has followed the victory contest with back-to-back losses in which the defense gave up a combined 104 points. It is on the offensive side of the ball that the Crimson hope to attack and improve.

“We’re trying to look at their defensive schemes and see where we can try and find where they’re vulnerable,” Shanahan said. “But ultimately it will come down to us being ready to play on Saturday.”

Harvard is sure to follow the lead of Shanahan and the rest of its offensive line. In last weekend’s slugfest, junior running back Devin Darrington doubled Dartmouth’s rushing offense with 102 yards on the ground, firmly keeping him in second in rushing yards among Ivy League backs.

Last weekend, the stagnant Crimson offense was unable to match its incredible defensive performance. This week, however, that is the last thing on anyone’s mind.

“We have no other choice to reach our full potential and get ready to beat what we think is a good Colombia team,” Murphy said. “And that's what we've done.”