Instead, it was Harvard — a team that finished with a sub-.400 winning percentage last spring — that got Coach Byrne to leave South Bend.
By Jasper G. Goodman 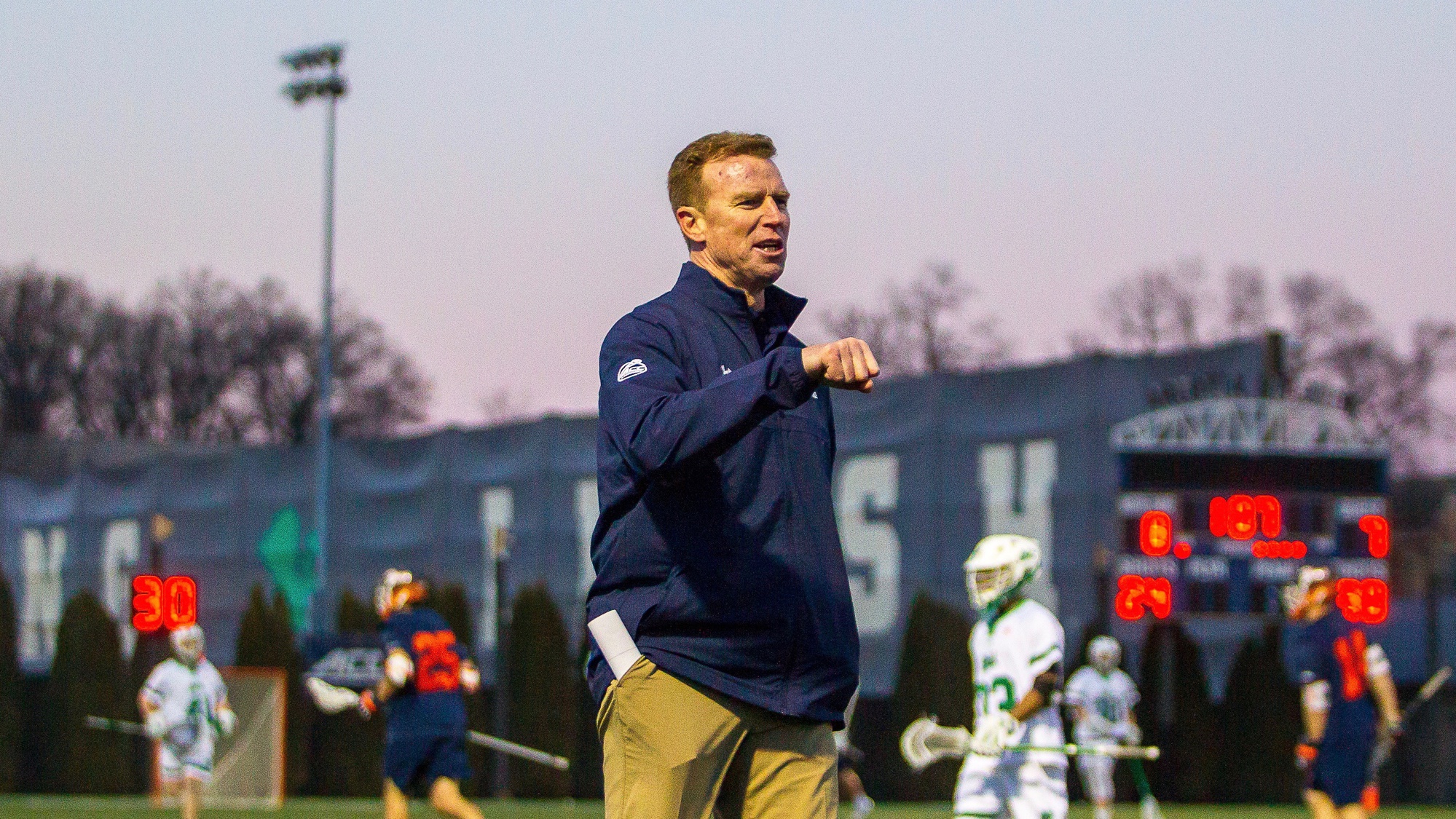 Coach Gerry Byrne was previously an assistant coach at Notre Dame before taking over the program at Harvard. By Courtesy Harvard Athletics

After 16 seasons as an assistant coach for one of the nation’s most consistently competitive Division I men’s lacrosse programs, Gerry Byrne had no shortage of offers once he started fielding calls about head coaching positions.

When push came to shove, though, Byrne wasn’t lured away from his assistant coaching job at the University of Notre Dame by one of the already-established D-I powerhouses that he entertained offers from. Instead, it was Harvard — a team that finished with a sub-.400 winning percentage last spring — that got him to leave South Bend, Ind., the town where Byrne attended graduate school and raised his family.

The decision, on its face, is somewhat perplexing. Byrne said that he “ultimately would have been the head coach” of the Fighting Irish “at some point.” Notre Dame has appeared in the NCAA tournament for 13 straight years and made a run to the quarterfinals last season. But he opted to leave for a program that has made it to the national tournament just twice over the same timespan.

“This was unbelievably appealing,” he said. “It’s Harvard.”

In an interview in his still-under-renovation office inside Dillon Fieldhouse, the former UMass Amherst standout made clear that he is excited about the challenge of bringing Harvard men’s lacrosse back into the national spotlight.

“It’s a much more interesting to take this opportunity now because Harvard’s not happy with where they are,” Byrne said. “There’s a belief — I would say almost an expectation — that Harvard should be in the national conversation in lacrosse when they see teams in their league already in the national conversation. I have been fortunate to have been offered every really good job over the last 10 years and said no for different reasons — family, or timing. And this one, which is the furthest away from being in that [national] conversation, was the most interesting.”

Byrne acknowledges that there is work to be done in order to get the Crimson to compete on a national level. Harvard finished last season 5-8, with just one win over an Ivy League opponent.

“They lost big in a lot of games,” Byrne said, “which is big by lacrosse standards — almost big by football standards at times.”

But still, he says there isn’t a large talent gap between the Crimson and the rest of the Ivy League.

“The difference between a team that's 10-5 and one that's 5-10 is usually not as wide as it would appear to be,” Byrne said. “I don't believe there's a massive talent gap between Harvard and the other teams in our league. The presumption from maybe your perspective would be, ‘Wow, what do you have to fix.’ And part of it is just a kind of a clarity of goals — a clarity of expectations, and clarity of the pride and the privilege of being a student-athlete at Harvard.”

Captain Kyle Anderson says that the team has practiced with an urgency this fall that he hasn’t seen in past years.

“When we came back to school, there was a different intensity and a different tenacity, especially out of our upperclassmen, who have done an amazing job,” the senior said.

Anderson interviewed the final six candidates for the head coaching job on the phone.

“I was kind of keeping guys in the loop as much as I could and giving some feedback to the other seniors,” Anderson said. “Honestly, everyone was really hoping that Coach Byrne would take it. ... We're just really happy that he took it.”

The team was without a coach for more than two months over the summer. During that period, upperclassmen organized workouts and ensured that players stuck to a program given to them by the strength and conditioning coach in the spring.

Byrne, who Anderson describes as a coach who is “really well-known in the small community of lacrosse” as a “defensive genius and a cultural driver for the Notre Dame team,” has brought a new coaching style for players to adjust to.

“His coaching style is definitely different from our previous coach, but I think teams adjusted pretty well,” senior midfielder Nigel Andrews said. “He’s definitely a coach who demands respect from his team.”

Andrews said that Byrne is more outspoken in practice than former coach Chris Wojcik ’96, whose contract wasn’t renewed in early May.

“Previous years, if we messed up in practice or something, most of the times it would be assistant coaches or us stopping practice and getting on guys,” Andrews said. “There wasn’t a lot of yelling, you could say. But I’d say Coach Byrne is definitely more vocal during practice, getting on guys and making sure everybody’s doing drills in such the right way.”

Anderson described the changes that Byrne has brought to practices as “refreshing.”

“Byrne is definitely a much more intense presence on the field, and I think that's something that we have needed as a team,” Anderson said. “People are starting to understand, even though you’re getting criticism and you're getting instruction, it doesn’t really reflect badly on you as a person, he just wants everyone to get much better.”

Players also said that Byrne sets forth few off-the-field rules for the team.

“He expects us to basically hold each other to a high standard, which has definitely been awesome so far,” Andrews said. “It has definitely made the team closer and I think it’s worked out pretty well.”

Despite last year’s disappointing results, the men’s lacrosse team hardly sees itself as in the midst of a rebuilding phase.

“Since I've been here, our team has always had tremendous talent,” Andrews said. “It’s just about organizing ourselves right away and utilizing our talents correctly. I definitely think that Coach Byrne is somebody who will be able to utilize us — utilize the guys that we have — the right way. So I definitely think that this year we could make a deep run into Ivy League tournament and the NCAA tournament.”

For Byrne, the challenge of cultivating a winning culture for a struggling Harvard team was what brought him to Cambridge.

“The excitement of creating something that’s never been before — what's more romantic than that?” Byrne asked.