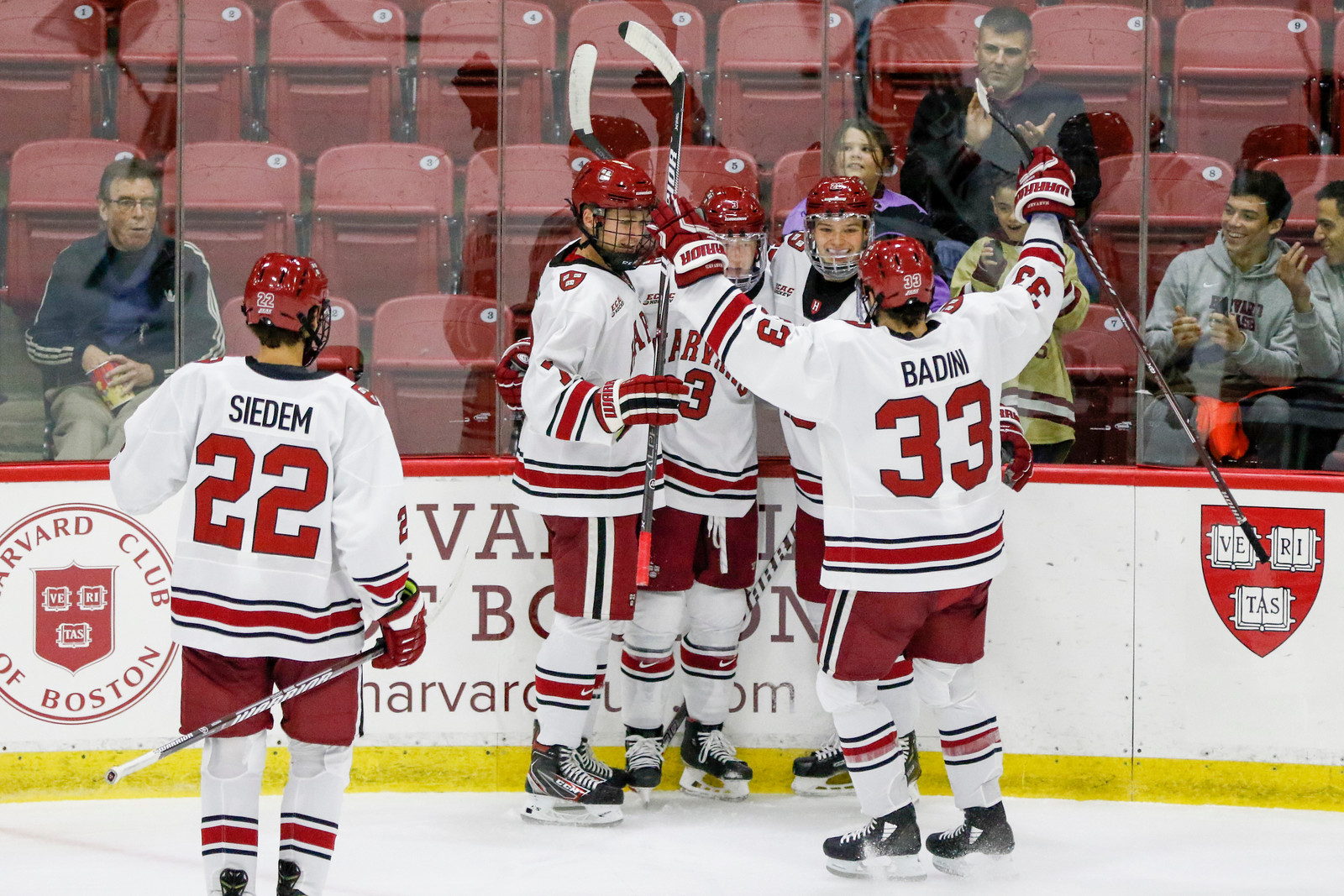 The Crimson picked up its first four-point weekend of the season and should expect a bump in its national ranking come next week. By Timothy R. O'Meara
By Spencer R. Morris, Crimson Staff Writer

In Saturday night’s duel between the Harvard men’s hockey team (3-0-0, 3-0-0 ECAC) and conference foe Quinnipiac (4-4-1, 0-1-1), the No. 18/15 Crimson built leads and defended them. The No. 15 Bobcats responded to Harvard’s surges with early-period goals in both the second and third frames, but the hosts were able to mitigate the comeback efforts and secure the 7-2 victory.

The Crimson's 3-0-0 start to the campaign is the best it has posted in the 16-season tenure of coach Ted Donato '91.

“It’s good to see our depth clicking right now,” sophomore forward Casey Dornbach said. “It’s good to see us able to get off to a good start…. We know every one of these [standings] points, especially at home, is huge. In the ECAC and the Ivy, one point at the end of the year can mean everything.”

Harvard owned the lead for most of the game thanks to its solid first period which included three tallies. The ice tilted back to even in the middle frame, as Quinnipiac quickly cut its deficit to two scores.

In the waning minutes of the second, however, the Crimson put home two pucks and rendered the contest out of reach for the Bobcats.

First, slippery skating and puck-handling from freshman forward Nick Abruzzese created a weak-side chance on which Dornbach capitalized. Just several shifts later, rookie defenseman Henry Thrun flipped the puck over goaltender Evan Fear on the rush. The strike, which was upheld after video review for an offsides call, put a comfortable distance of four pucks between the two ECAC adversaries.

In the third, Harvard added another two goals to Quinnipiac’s one, but the result was inevitable after the Crimson doled the deflating two-score blow at the end of the second period.

“We gave up a goal early, and we were able to hold them off,” freshman forward John Farinacci said. “That second period was all over the place with all the penalties. It was definitely good to get a couple goals at the end of the second, but…we still had to come out and have a good first five and finish it off.”

To close out the first frame, sophomore forward R.J. Murphy found twine for the first time this season and extended the advantage to three. Senior Justin Szeto earned his first career point on the play, as he slipped a pass to Murphy from behind the net to set up the strike.

Murphy’s tuck turned out to be the game-winner in Saturday’s clash and was just one element of a strong opening 20 for the crimson and white. It was also a prime example of the healthy contributions Harvard received from skaters throughout the lineup.

“What’s a real positive for me is that we’re getting contributions up and down the lineup,” coach Donato said. “When you have guys step up and make plays like that, it really gives a lot of confidence on the bench.”

Twelve minutes into the tilt, the referees assessed Quinnipiac blue-liner Peter DiLiberatore a five-minute major penalty and game misconduct for hitting Harvard’s Jack Badini from behind. One minute into the ensuing non-releasable powerplay, the home team converted its first man-up marker of the season, courtesy of center Jack Drury.

With a spinning backhand pass, junior point man Reilly Walsh worked the puck down near the goal line to Dornbach. The sophomore found his classmate at the top of the right circle, where Drury ripped a one-timer over the left pad of Bobcats goaltender Keith Petruzzelli to give his team a two-score lead.

“[The powerplay] is something we have to clean up a little bit,” Dornbach said. “But it’s good to see us getting offense in multiple ways.”

The major penalty played a significant role in tilting the ice in the Crimson’s favor through 20 minutes. The squad’s first-period performances in its two games leading up to Saturday left something to be desired — defensive-zone turnovers and a subsequent failure to possess the puck in the offensive zone defined these two opening frames. Against Quinnipiac, though, Harvard thoroughly dominated the tilt’s incipient stanza.

“Quinnipiac is notoriously one of the best teams in the neutral zone…and they’re a really good transition team, so you have to be good with the puck,” coach Donato said. “I thought we were better with the puck today, and I thought we were able to get some pucks in their zone and get plays stopped up and use all five guys offensively.”

So initially, the goalie swap seemed to work — that is, until the Crimson’s late-second-period surge.

Junior forward Henry Bowlby broke open the scoring in Saturday’s affair. The Harvard winger darted through the slot and picked up a feed from Murphy before placing the puck right under the bar on Petruzzelli.

The tally added to Bowlby’s productive weekend (2–1—3), as well as to Murphy’s career-best night (1–1—2). Early in the campaign, Bowlby has shown that his top-end speed will be an asset for the Crimson all year.

Bowlby and Murphy are two of the many significant Harvard contributors through three contests this season. Abruzzese (2–4—6), Dornbach (1–5—6), and sophomore blue-liner Jack Rathbone (3–3—6) sit tied for the team lead in points. Dornbach’s three-point effort on Saturday paced all skaters. Badini (1–4—5), Farinacci (2–3—5), and Thrun (2–2—4) have also played large roles in the high-octane Crimson offense through the squad’s first two weekends. All six of these impact players inked the score sheet on Saturday night.

After a four-point weekend, Harvard’s national ranking is set to improve by next week, when it will hit the road for the first time this season for Ivy League rivals Brown and Yale.

The schedule ahead will provide more adversity than the undefeated Crimson has seen to date, but the team’s young, skilled core has assimilated quickly to college hockey and should continue to deliver ample firepower moving forward.